It's a month after the fact, and probably a little too early (I saw Easter candy being sold before Valentine's chocolate), but there was a collection from IDW of the numerous Disney Christmas Newspaper Comic specials that'd been sporadically released throughout the years. 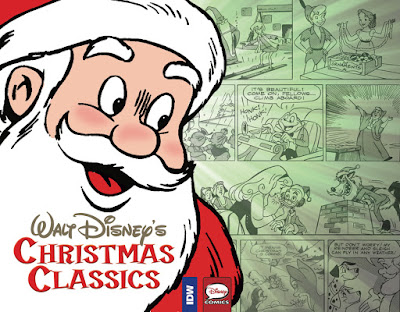 In fact, the book was originally released on October of last year.  But I didn't get a chance to see it on the shelves until recently.  Though you'd never know about it, since the search function for finding Disney comics is notoriously lousy on their webpage, which is more devoted to showing single issues than the more profitable collections.

It may be borne out of nostalgia, since IDW also released their collection of Sunday Disney Movies, some of which I've shown on my blog, like Black Hole, Condorman and The Fox & The Hound.
But I like to think I might've had some influence in their decision to license long-forgotten properties, having shown the incomplete arc of Peter Pan.  Now, you can find out whether the Lost Boys managed to save Christmas or not!  (Spoiler - they probably do)

I was debating over whether I should mention the news or not, since at the time, I wasn't sure if they were going to include the later comics that showed up after the sudden dry-up in 1987, where no new Christmas comics appeared until 1992, when the Disney Empire radically reinvented their Animated movie base.

If none showed up, I would've felt justified showing the missing comics here.  However, a quick skim at the back showed that they had the very comics I was intending to show, which, while annoying, saved me the trouble of having to scan them myself.

It may seem like a no-brainer now, but it's hard to imagine a time when Disney was ever in financial trouble, and in danger of being bought out by other companies, rather than the other way around.  In fact, things were so bad that the Animation department was seriously considered being disbanded by Michael Eisner(!), who thought they could coast on on the success of the classic Animated movies they already had, until the success of The Little Mermaid showed there was still a profit to be made from newer movies.

Even if the celebration of said holidays make no sense for their time periods.

Strangely enough, the last Christmas story in 1997 was The Little Mermaid, rather than Hercules, or even Toy Story, which would've been a natural fit.  I suppose it was their way of making up for not investing in the founder that kickstarted their Princess line.  That, and show off some hot Mermaid naval-gazing.
Posted by DeBT at 1:28 AM