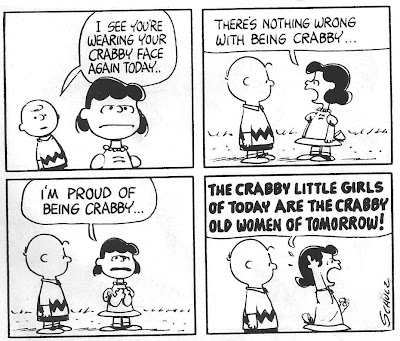 When growing up, I was completely mystified by the presence of contrary characters in children’s TV shows such as Gruffi, Grumpy Bear, Grouchy Smurf and Oscar the Grouch. Their very nature seemed completely at odds with the rest of the naturally happy cast. Especially when there were books that gave helpful hints on how to become antisocial. This was a paradox in itself - how could there be people who chose to be miserable and unhappy? I’d always gone out of my way to make people laugh, so this kind of mindset was anathema to me. 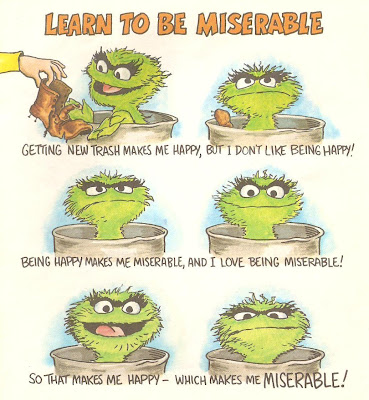 Much like the executives who didn’t understand Ren’s reluctance to be happy (Ren wants to be miserable), so too did I not understand that that these opposing personalities were supposed to show difference of opinions. It wasn’t until I grew older and hit puberty that the unthinkable happened - I started having more negative thoughts. This was a defense mechanism to the stress of High School, and dealing with personal problems at home. No matter what suggestion anybody gave me for any problem, I would always find something wrong with it.

“I don’t like getting up in the morning. I’m always tired when I get up.”
“You know the solution to that. You need to start going to bed earlier.”
“Are you mad?? I need time to finish my work, and get ready for the next day! Besides, I want to catch my favorite show, and don’t like wasting valuable VHS tape, not to mention the captioning might get wonky, or I’ll miss the end.”
“Well, you could always save preparing your lunch for when you wake up the next morning.”
“That’s even worse! I wouldn’t be able to sleep properly all night long, worrying about getting everything done in time if I oversleep. It would be counterproductive to the very dilemma you’re suggesting. It’s better for me to prepare everything beforehand.”

And so on and so forth. I would invariably point out the logical flaws in their suggestions. The problem was that I simply couldn’t accept any idea that didn’t come out of my head. It had to be something that sounded like something I would think up. Even slightly modifying other people’s ideas into acceptable molds for personal use was completely alien to my way of thinking. 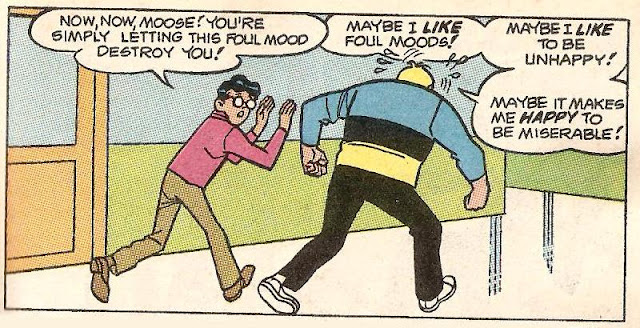 I faithfully followed the Glen Gould method of seeing the world - Every silver lining has a cloud. If something good happens to me, I can’t take solace in that, because sooner or later, something bad will happen to upset the balance (or righten it). I became convinced that the universe was conspiring against me to make me miserable, and decided to save it some time. (It's no great secret that I strongly identified with Marvin the Paranoid Android from the Hitch Hiker's Guide to the Galaxy) If I felt happy for too long, karma would notice I’m having a good time, and have some disaster befoul me to punish me for having too much fun. As a result, I can only remember the negative events in my life. This is handy for aversion therapy and avoiding dangers, but it also means that I have no room for positive memories. I can recall with clear accuracy every single bad thing that’s happened to me, but have to struggle to remember any of the good stuff. Even if 99% of the day was great, if just 1% turns out to be bad, I’ll only remember that single 1%. Given the odds of the natural obstacles in a single day, the probability of getting 100% daily falls to zero. 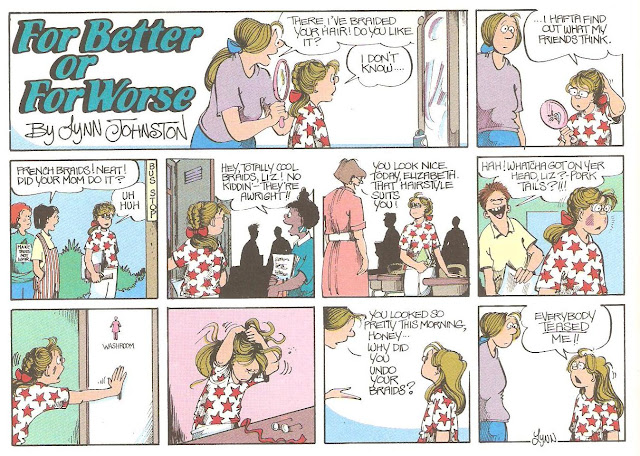 I also can’t take praise very well, because I know in the back of my mind that sooner or later, the complimenter will eventually segue into a “But...” that will negate their previous compliments. Even if they follow the ritual of starting out with flattery, then moving on to criticism and finishing with a compliment close. Starting and ending a review with compliments may make the intended person feel better about the main body of criticism, but it’s that body I pay the most attention to. I can’t afford to allow myself to bask in praise,because I know sooner or later, that good feeling will soon be replaced with creative criticism. Also, when I bask in praise, I get overconfident in my ability, and fail to pay more attention to my surroundings, which creates a higher risk of making silly mistakes, so I have to remain on constant guard. 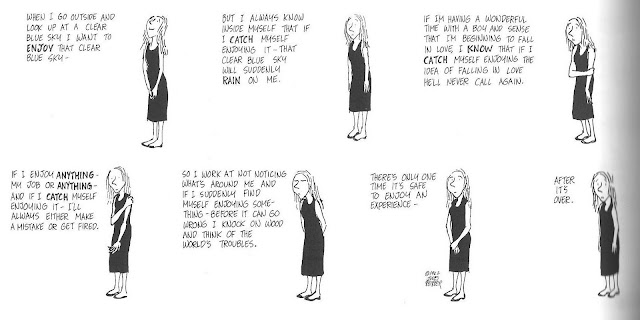 The reason for my continued pessimism is that I didn’t like being constantly caught off guard. My rationale was that if I already felt miserable, I couldn’t sink any lower if I encountered a bad situation. Very much like how lying on the floor is a good defense against falling down. You can’t bruise yourself if you’re already on the ground. It's impossible to sink any lower if you’re already there. (Unless the floor collapses) The problem is that you become so accustomed to the comfort of the floor that you become reluctant to stand up again. That’s a surefire recipe for falling down again... unless you’re ready for the worst.

I found that if I mentally prepared myself for the worst possible thing that I could think of, I would be better able to cope with it. However, my imagination kept failing me, because I would encounter things that I’ve never read about or encountered. I was in a state of catatonic worry when my computer fan broke down and had to wait for the ordered parts to come in. In all the computer-related disasters I’d read about, internet scams, e-mail viruses and online hacking, I’d never read anything involving broken cooling fans, so I had no way to cope. Just as people get their jollies from watching hack n’ slash horror movies, I get satisfaction from suspense stories about people dealing with social disasters. They give me all kinds of clues on how to avoid these kinds of situations. Better yet, I learn from their mistakes, and no one gets hurt.

I’m not alone in this viewpoint. There are people who proudly display their pessimism as a way of going against the flow of people who’re blinded by the mantra of always being happy. There’s a socialized peer pressure in always being chipper and friendly. If you’re not being productive, then you’re a danger to society. The inverse is also true - being too happy and being blind to potential dangers is a recipe for disaster. 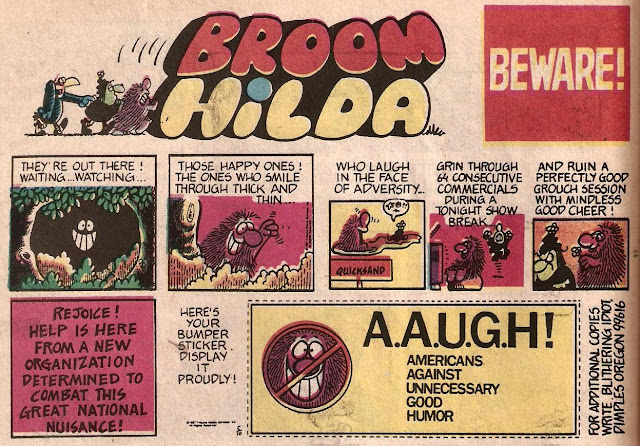 The problem with this defense mechanism is that I’ve become unable to see the bright side or feasible options to practically anything in life. Thinking a certain way is like neglecting a muscle or talent. It atrophies if it hasn’t been used in a long time. In order to exercise this again, I’ve had to practice at recalling all the good things that happened to me, rather than focus on just the bad. The point is not just to dwell on the negative aspects that happened, but also to retain the good things that happen too. Even if the bus was late, even if I stub my toe while walking in through the door, I have to recall positive things that happened before coming home. For the most part, I dwelled on uncontrollable aspects such as, “There wasn’t a magnitude 9.9 earthquake” or, “The sun didn’t collapse into a black hole”, which given the state of the world, could still be seen as a bad thing. Eventually, I would move on to more relevant aspects of my day, such as, “My lunch didn’t give me diarrhea”, or “My boss didn’t beat me up today”, then devolve into more realistic boring examples, such as, “It wasn’t too bright today”, and “There were some leftover snacks from the staff meeting.”

Finding positive things in even the most direst of situations is extremely difficult when they’re personal. When my mother first found out that I was deaf, she was stricken with a case of self-loathing and despair. Like so many parents of handicapped children, she felt that she was in a quagmire that she couldn’t dig herself out of. All she could see was years of service without any proof that all her work might be for naught. Then my Bubby called her with what she considered happy news. “The bubble boy just died!” she said in a chipper voice. The bubble boy was a child with immune deficiency syndrome who’d been living behind a sheet of plastic all his life. My mother was naturally appalled at Bubby’s take on the news. “How can you be so happy? A human life was just snuffed away!” Bubby just calmly replied, “He’s no longer suffering.” That little conversation snapped my mother out of the funk she was in. There were plenty of people suffering worldwide. Compared to my deafness, she’d gotten off easy.

My view of the world is one of absolute bleakness that goes so far around the corner that it becomes funny again. (Though not on a Funky Winkerbean level) I like to think of myself of a negative optimistic nihilist. I know that terrible things will happen, but live secure with the knowledge that no matter how bad things get, there's always a joke lurking somewhere to make it even worse. 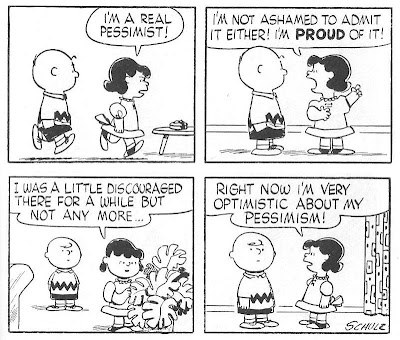 The Outcome of Mr. MacLeod's Gratitude by Ogden Nash

When Thanksgiving came twice, who walked so proud
As that grateful optimist, Mr. MacLeod?
Things you and I would deeply deplore
MacLeod found ways to be grateful for,
And this was his conscientious attitude:
Double Thanksgiving, double gratitude.
Whatever happened, no matter how hateful,
MacLeod found excuses for being grateful.
To be grateful, he really strained his wits.
Had he hiccups?
He was grateful it wasn't fits.
Had he hives?
He was grateful it wasn't measles.
Had he mice?
He was grateful it wasn't weasels.
Had he roaches?
He was glad it wasn't tarantulas.
Did his wife go to San Francisco?
He was glad it wasn't Los Angeles.
Mrs. MacLeod, on the other hand,
Was always complaining to beat the band.
If she had the mumps she found it no tonic
To be told to be grateful it wasn't bubonic.
If the cook walked out she would scream like a mink
Instead of being grateful she still had a sink.
So she tired of her husband's cheery note
And she stuffed a tea tray down his throat.
He remarked from the floor where they found him reclining,
"I'm just a MacLeod with a silver lining."
Posted by DeBT at 1:00 PM