With the recent analysis of the musical outline of a Tintin page, I thought it was long overdue that I reproduce a topic I chose for a powerpoint presentation a year ago. The people I showed it to weren’t quite as versed in comics as I was, so my observations went a little over their head. Hopefully, I’ll have more success here.

The basic purpose of comics is to show an idea / story in an easy-to digest manner. The difference lies in how that information is processed. Using an example, here’s the basic concept of 99 Ways to Tell a Story by Matt Madden; where a man goes to a fridge and forgets what he opened it for. 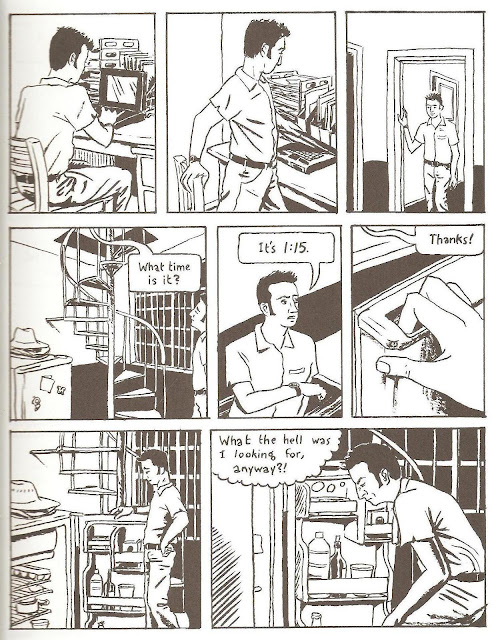 This simplistic formula is expanded to include other examples in other mediums, genres and parodies. It can be condensed into one panel... 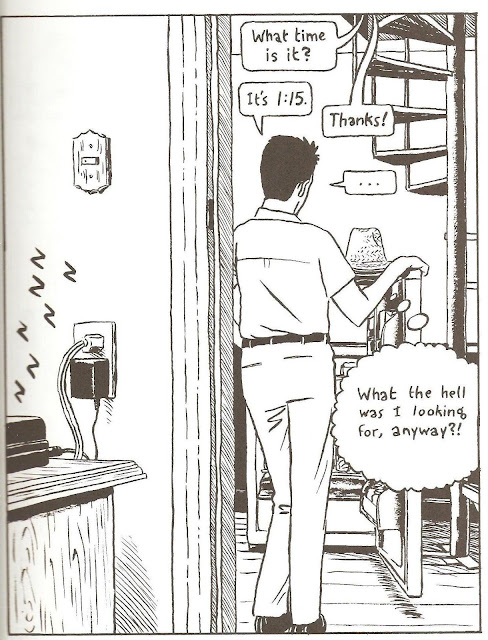 Or expanded into 30 panels. Either way, the same information is evident, but the outcome is completely different. 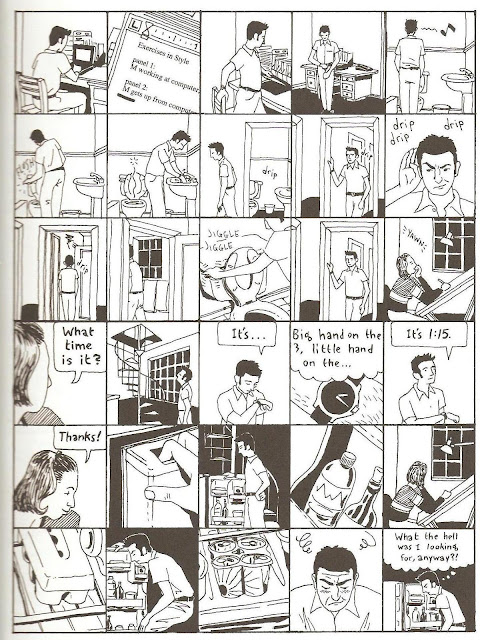 Scott McCloud noted that there wasn’t a dependable model for how time is perceived in comics since depending on the story told in between panels, any amount of time could happen in the space of a gutter. 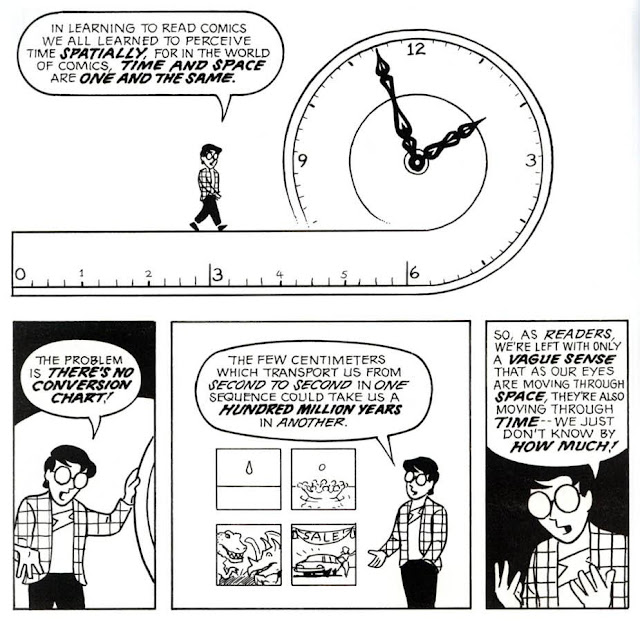 However, I’ve noticed that depending on the format they’re told in, a certain amount of information is revealed depending on the comic. I’ll start from a base that general audiences are likely to be most familiar with - the newspaper comic strip.

With slight variation, most comic strips have this basic outline:

Setup / Recap - Framing the current dilemma or refreshing the reader’s memory of what happened yesterday or a week ago.
Interlude - A leading stage into where the characters go next.
Beat - The pause that usually leads to the...
Finale / Joke - No explaination needed here.

This isn’t strictly adhered to, since sometimes you’ll have the interlude and beat panels switched around. If a cartoonist is particularly prolific, they’ll have a recap combined with a later panel. In recent years, the number of panels of newspaper comics have reduced to the point where just the interlude or beat is used instead, usually resulting in a silent penultimate panel.

The second-most common feature of the comics page is the single-panel comic. Scott McCloud may feel that these don’t quite count as comics, but I’ll include this for another reason that’ll be explored later. Jim Unger of Herman said “Cartooning is basically an art of reductionism.” That’s reducing things down to their most basic elements. Its condensing the entirety of the Pacific Ocean into a teaspoon. Granted, that’s one big teaspoon.

Here, we can see from this single-panel comic the distillation of business people’s tin ear for their own products.

After a week of these daily comics, we come to the big finale at the end, the Sunday comic.

Despite having more panels than a daily, the layout of a Sunday comics page is ironically enough, just as restrictive. As Bill Watterson pointed out in his 10th anniversary book, the layout of a Sunday page is dependant on where those panels fit. If they don’t match the specifications that newspapers require them to fit, then they can’t be used, since they can’t put & paste comic panels wherever necessary. 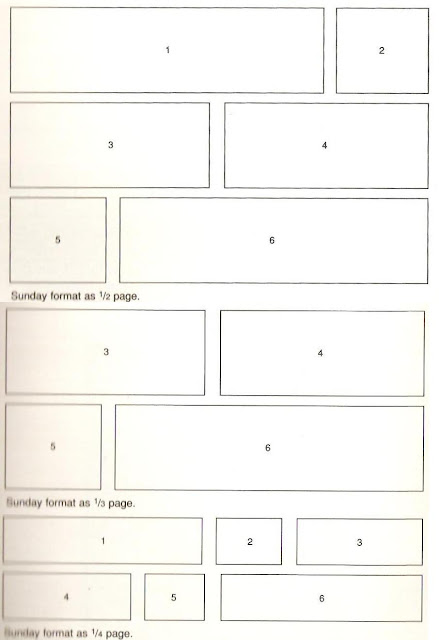 In most cases, the panels that’re most likely to be discarded are the first two “throwaway” panels, usually consisting of the title page and a mini-joke that could count as half of a daily comic. They might not be deemed necessary, but I always enjoyed them. When they weren’t available, I would be wracking my brain over what could possibly prelude or describe the main comic. When I actually got a chance to see them, they were always the last thing I could've thought of, since I wasn't in the cartoonist's mindset. Here’s an example - what single panel could explicitly summarize this Broom Hilda comic? 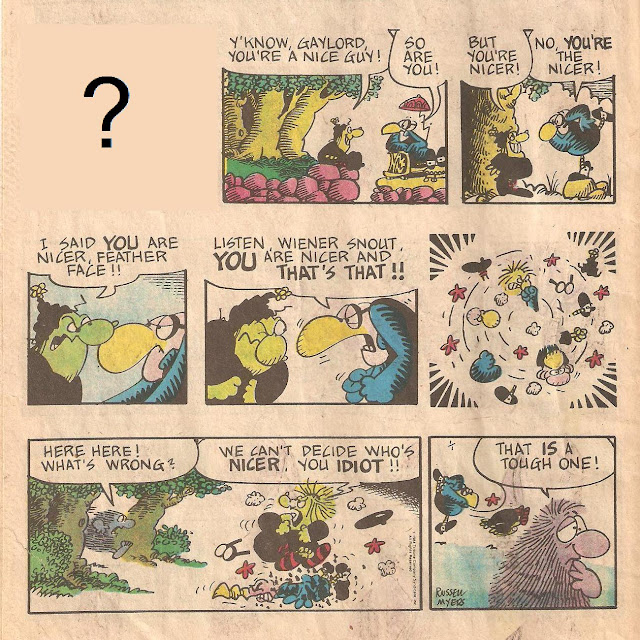 Take some time to think over it...

The answer of course is this: 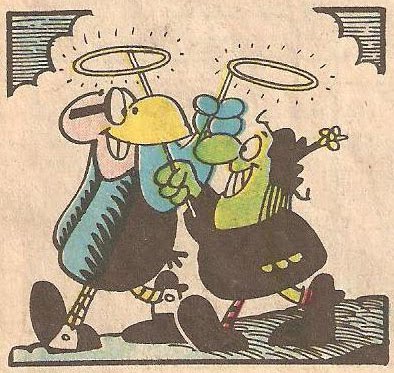 These throwaway panels and single-panel comics are also a close cousin to a similar feature found elsewhere in the newspaper - political comics. 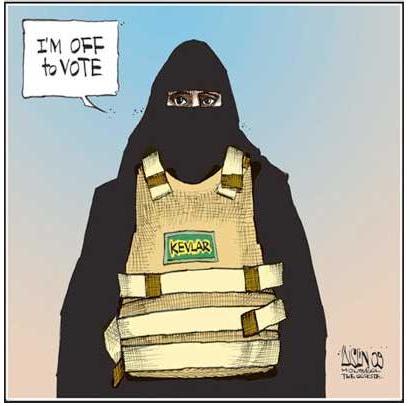 In this, the job is even more difficult, since not only do cartoonists have to quickly summarize recent events, but they also have to do so in a timely manner and produce something that’ll resonate with the public. 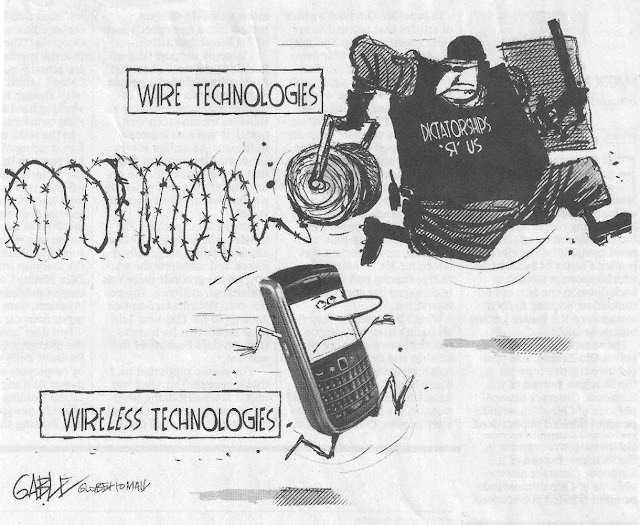 Sometimes these cartoons might be able to stand the test of time, and sometimes they'll be a spur-of-the-moment thing that'll only make sense to people aware of current events. Not everybody can be a Bill Mauldin, and caricaturists can be some of the most reviled people on the planet for "telling it as it is". If you're going to branch out into this field, you better be prepared to take your lumps whenever you're going to get them. 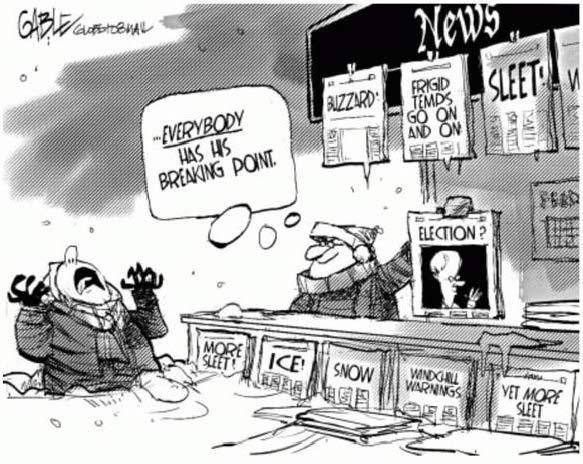 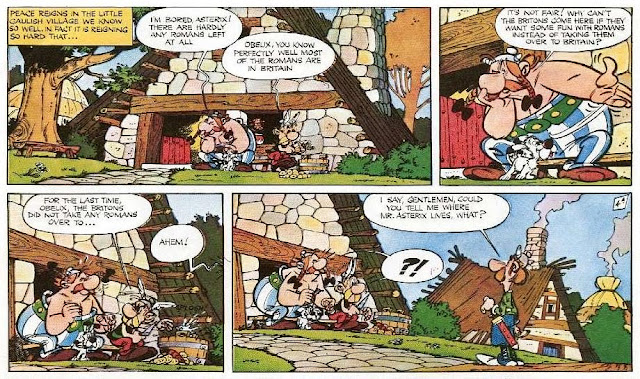 Here’s half of a typical Asterix page. As you can see, BDs are arranged similarly to a Sunday comic page without the throwaway panels. If you look closely in the lower right hand corner, you'll notice that there’s a numbered letter.

Every page has a designation of 1a, 1b, 2a, 2b, etc. The average French page is actually made up of two "plates" that’re combined together. This is how they’re able to cram in more detail by paying more attention to a specific row of panels rather than the page as a whole. 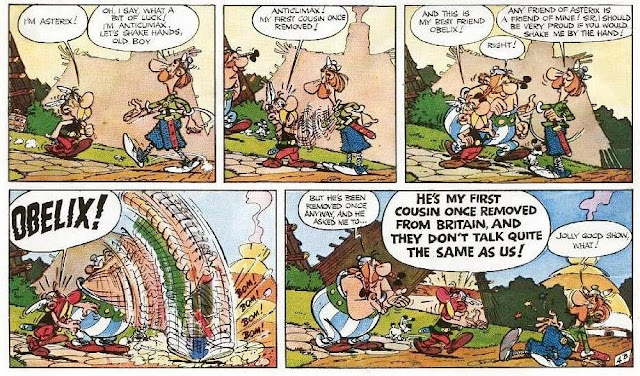 The only difference is that unlike Sunday comics, BDs don't always have to worry about ending on a joke. However, despite the apparent freedom, there's still limits. The average European album only contains 48-62 pages of material, which can make the pricy hardcovers a hard sell. 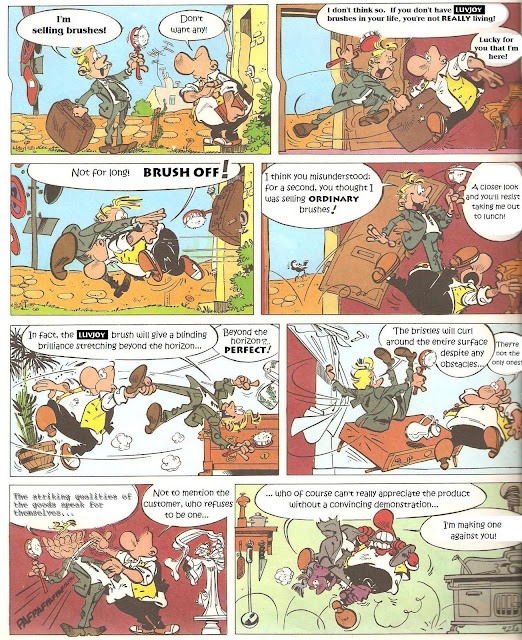 Nowadays, this isn’t a tried-and-true rigid formula, but for a long time, it was the considered accepted model. The restrictions of BDs is very similar to the rigid 3-row, 6-panel layout of American comics. 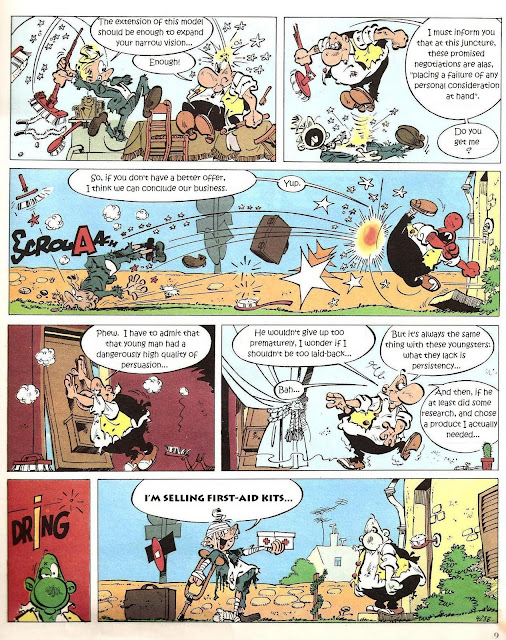 When American comics were first printed, they were collected versions of early newspaper Comic Strips. Later, when experimenting with other genres, the most popular stories were crime, horror, war and even romance comics. Many of these were written by pulp writers who were paid by the word. As a result, these comics had more text than usual, often repeating what the images were already showing. 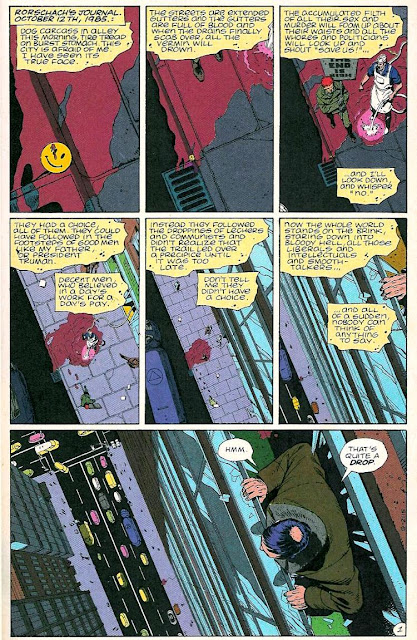 That's the opening page for Watchmen. It's a classic image - a zoom out shot that's imposed with the narrative of Rorschach's journal. When viewed from a distance, it's easy to make out even without the captions. But every other page in the book looks like this: 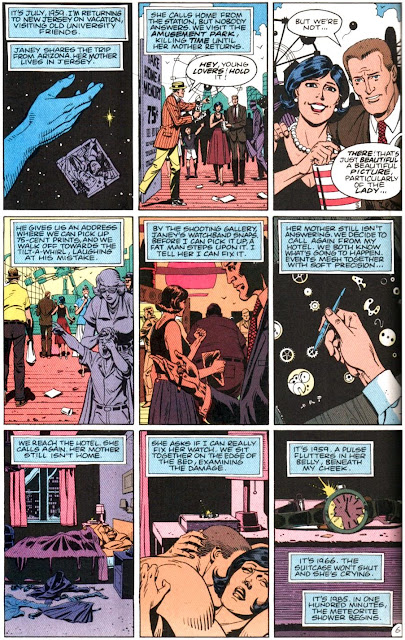 Here, each panel is vying for competition, wanting to be important in some way. Of the relevant frames, only the lower tier could be considered a continuous flow, and even then, it's hard to make out upon first sight. As a result, no specific image stands out, and the result is a jumbled mess. And this is considered one of the classics of the medium.

This is why even the most faithful film adaptions of American comics take a lot of liberties in removing entire chunks of exposition between characters. There’s a scene in Brian Michael Bendis’ Fortune & Glory where he’s talking to a friend in the Hollywood biz about adapting one of his noir comics into a movie. Upon transcribing his first draft, his friend tells him that his script’s a little long. 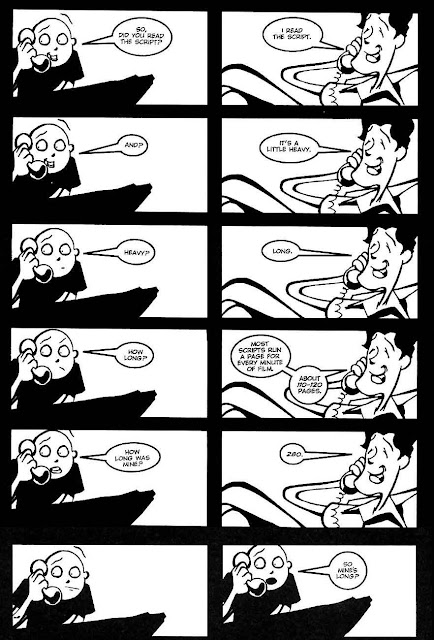 Later when trying to cheer up Bendis' apparent lack of natural film instinct, he tells Bendis to relax and watch a typical movie - any movie - and pay attention to how little actual dialogue happens on the screen. Narrative prose can be astounding if done well, but not everybody has a lyrical formula that can be easily duplicated on a consistent basis. An alternative storytelling style wouldn't be conceived of until much later. It would take the popularity of another overseas comics market to show the viability of using images that were appealing to the eye.

A little warning - the following panels are flipped to read from left to right, unless noted otherwise. Here’s some commentary from A Drifting Life: 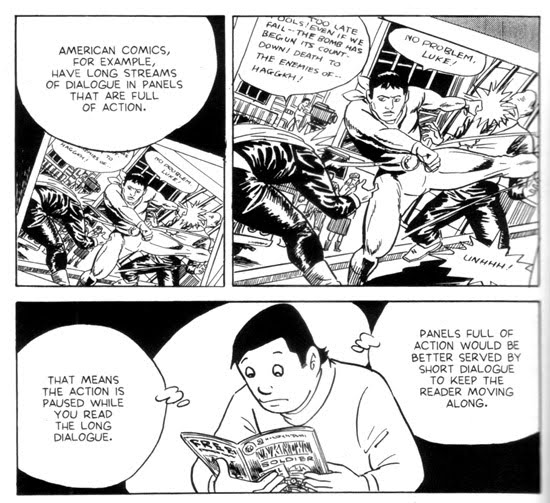 Even back in the 50's when Manga was being influenced by movies, Tatsumi realized the importance of keeping the reader’s attention. He also had to learn how not to waste countless panels of suspenseful scenes of nothing happening. No point in introducing a gun in the first scene if you’re not going to use it as a hammer later. If American comics suffer from verbal diarrhea, then Japanese comics suffer from visual diarrhea. The difference is that American comics spend plenty of time on a page, and figure that the best way to make their audience appreciate their attention to detail is to sprinkle it with tons of narrative. But all that does it clutter up the page with needless exposition. By contrast, Japanese comics spend just as much time on an image, but give their panels very little dialogue.

From the example shown, you can see how much faster the action flows with minimal commentary. Also, even at reduced size and scanned quality, you can still tell what’s going on. The whole point of creating multiple images that’ll be glanced at only briefly is to give the reader the sensation of being immersed in the action on the page. It makes them want to know what happens next. This is how in Japan, the average reading speed of Manga is 3.75 seconds per page. Even in a typical 192 page book, that’s still 12 minutes of enjoyment right there.

More has been said by Telophase about the layout of the typical Manga page, so I won’t attempt to repeat what’s already been said. However, her livejournal is currently missing the images she used to illustrate her argument, so for posterity’s sake, I’ll be reproducing them here. (These images have been left unflipped) 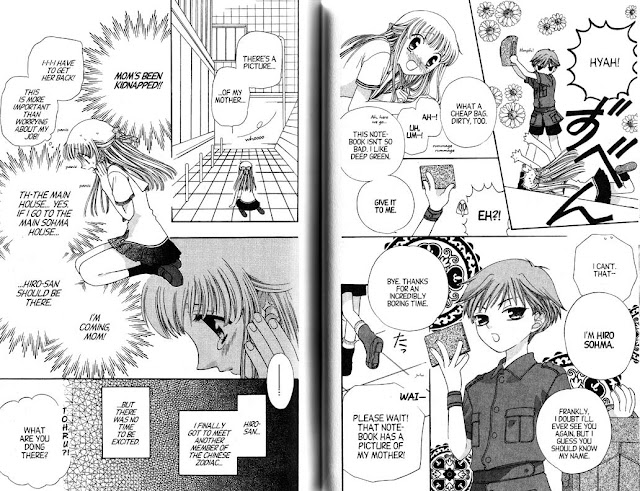 Even if we don't zoom in on the relevant text, we can still gleam the emotional context from the scene alone. Removing the text from the balloons doesn't even slow down the meaningful looks. We're still dealing with a bratty kid causing emotional turmoil on an innocent girl. 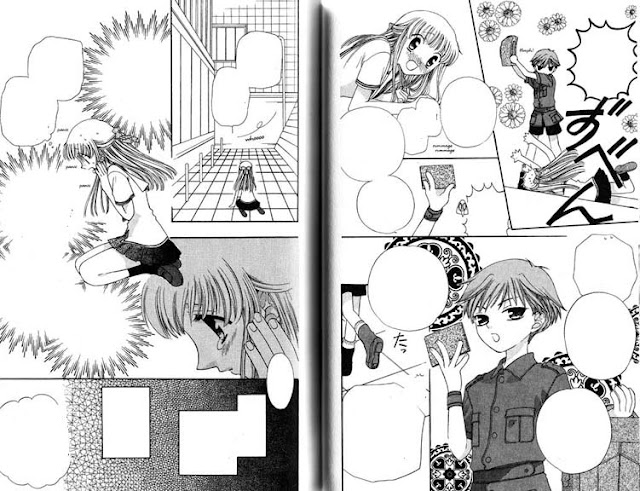 Likewise, the arrow going throughout the blank balloons shows that the thin line between where a panel begins and ends is very sketchy. 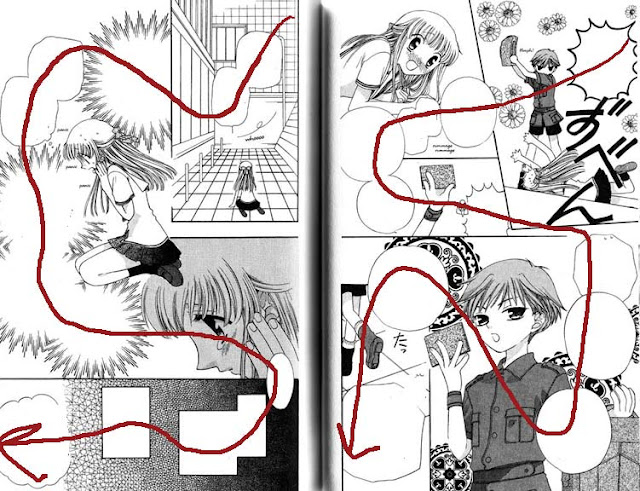 Most serial Mangas usually introduce one concept at a time in a magazine issue. That way they have time to draw inspiration from their ideas or give time to explain them. Otherwise it would take them longer than it usually would take than if it were published elsewhere. This is why it's more satisfactory to read American Shonen Jump chapters when collected in batches of four chapters at once, since they're usually broken down in easy-to-digest collections that demand immediate reading.


So, to summarize, here’s a handy-dandy conversion chart:

This isn’t an exact science, and there’s bound to be exceptions, but I think it’s pretty close.

99 Ways to Tell a Story: Exercises in Style by Matt Madden
Men of Tomorrow: Geeks, Gangsters and the Birth of the Comic Book by Gerard Jones
Understanding Comics by Scott McCloud
Posted by DeBT at 1:08 PM