There’s been a lot of criticism for artists reusing panels, myself included. It’s often been pointed out that reusing the same artwork in different panels just stinks of laziness. It can be particularly annoying when it’s especially obvious. 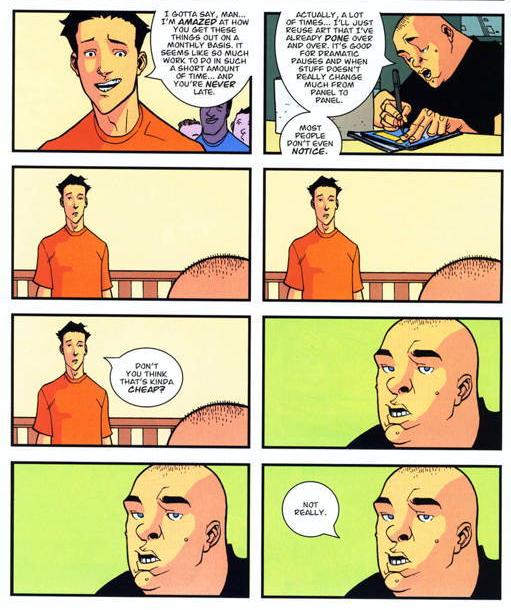 However, there’s one aspect of this kind of repetition that I don’t think has ever been addressed - the panel where there are subtle changes. This is a little tricky to get across, so I’ll try to make my point as best as I can.

I’m not talking about the panels where the artist obsessively devotes their time in redrawing a scene that looks almost exactly the same, but is actually a different picture. This is something Gary Trudeau did to the White House in Doonesbury, when everybody thought he was using photocopies. Ironically enough, even though he improved his artwork (some might say at the expense of his writing), there were people who couldn’t believe he improved that much during his sabbatical, and must’ve used a ghost artist instead. 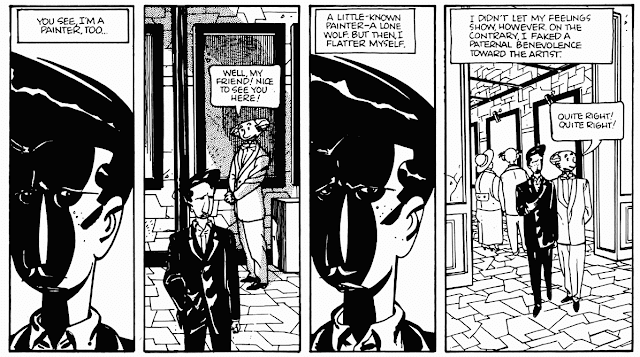 I’m talking about panels that don’t progress from side-to-side, but are similar from above and below. This isn’t quite animation, since these panels aren’t occurring in tandem within each other, but happening at different intervals elsewhere. The most noteworthy ones are where similar panels show up in specific locations that gives the page a notable pattern. 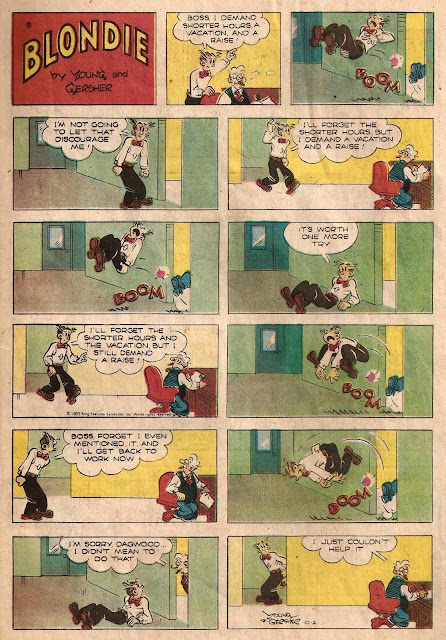 Just as kids enjoy mix-and-match games, I suspect there’s an inherent thrill in finding similarities between two different panels. In particular, I enjoyed seeing these panels of Dagwood getting booted out of the office, so it’d look like a natural progression of time, even though it took place at different intervals. 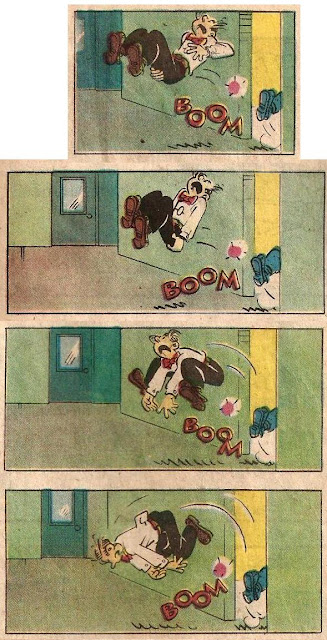 Another example I like to think of is when AstroSmurf has landed on what he thinks is an alien planet. In these two chosen panels, which both took place at the right hand side of the page, on the first and third rows respectively. If seen from a distance, it would look like he’s reached the bottom of the ladder, even though he’s actually going up in the 2nd panel.

The adult furry comic, Zandar’s Saga has some better examples of the kind of layout I’m talking about. The size and viewpoints of the panels are similar from above and below. This shifting from small facial close-up to wide-angle vision from behind gives the page a certain consistency throughout.

As an aside, Zandar’s Saga is a great read at over 300 pages and counting. Despite it’s sub-par artwork, it becomes a pagereader after the first six pages of rather boring exposition during demon sex. Don’t think of it as an exercise in titillation and pandering to uncomfortable fetishes. Think of it as a really good story that just happens to have a lot of sex in it. It’s the strength of the storyteller to keep their audience engaged while denying them obvious simple pleasures. So far, the latest chapters keep getting repeat viewings even though there’s hardly been any skin for ages. Similarly, David Hopkins of Jack fame had some examples of his racier artwork put up on a 4chan imageboard, and his fans preferred his stories to his eroticism. For a fandom that’s often pigeonholed as sex freaks, when their audience is more interested in your STORY than your PORN, that’s a sure sign of superior storytelling skill.

With that digression out of the way, let’s get back to the topic at hand.

There aren’t too many Manga examples, though it’s not unusual to have a zoomed-in face between the top and bottom panels. This kind of thing is more common in Old-school Mangas, such as Tezuka’s works, when he was experimenting with the format in every conceivable manner possible. Here’s a page from Astro Boy where only the 3rd row would be considered the odd one out. 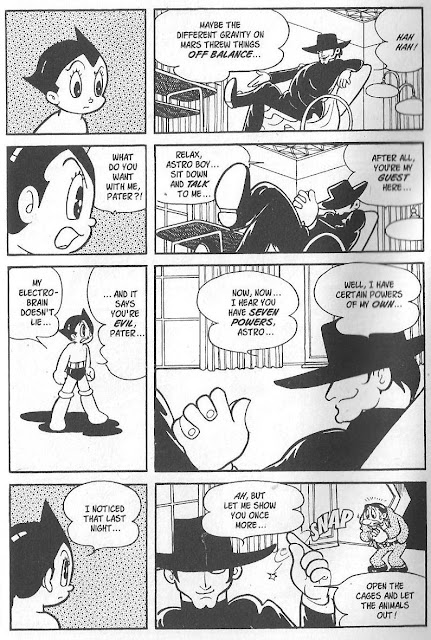 These kind of layouts are quite common in Lucky Luke for some reason. 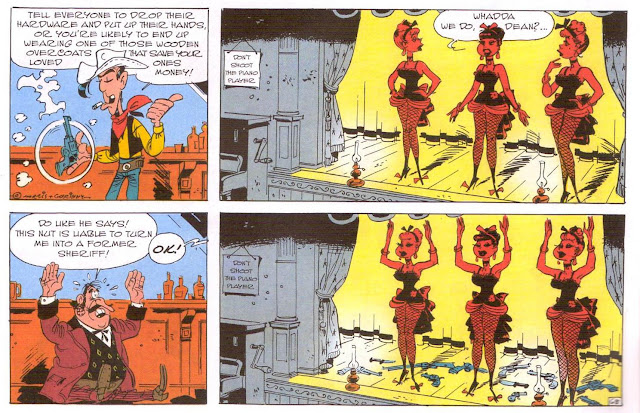 Much like how sitcoms give the viewer a feeling of comfort when the actors play out their roles in the same backgrounds, so too does the use of similar panels give the reader a sense of familiarity with the scene. The longer they stay in a certain location, the more they can identify with what’s happening. This is different from the typical comic where positions and camera angles keep changing in order to make things appear more exciting. This kind of vantage point is slower, but keeps things grounded.

The panel-to-panel progression between panels could be part of Bone’s popularity. There’s multiple scenes of events occurring in one moment, then showing what happens next. There’s not too much difference in showing the viewpoint from multiple angles. The camera stays rooted to a particular spot for a determinate rate of time before moving elsewhere. While the often referenced (but never parodied) Stupid Stupid Rat Creatures page is often used, a better example would be when Lucius betted on Grandma Ben in front of Phoney Bone. 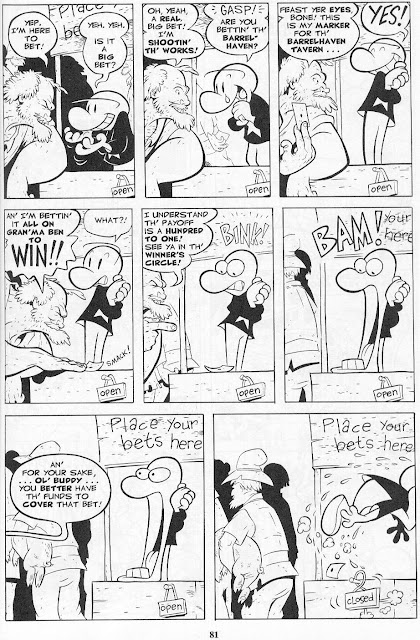 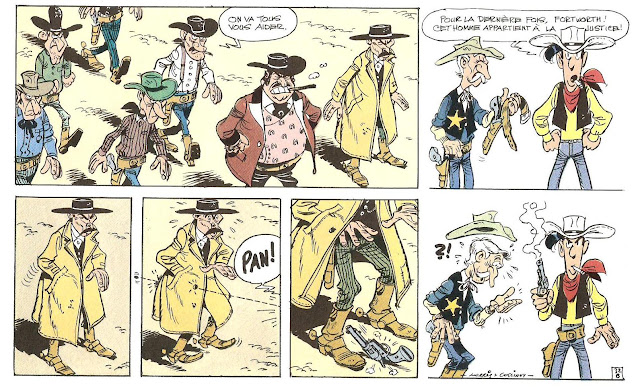