When The Hunchback of Notre Dame was released in 1996, it was heralded as a new trailblazing path for Disney movies in moving beyond mere Fairy Tales.  But Disney had apparently forgotten that they'd done adaptations of more serious works in the past before.  Ranging from Ichabod Crane and Mr. Toad, to the first five minutes of The Jungle Book that was faithful to its source material, before becoming the Baloo show. 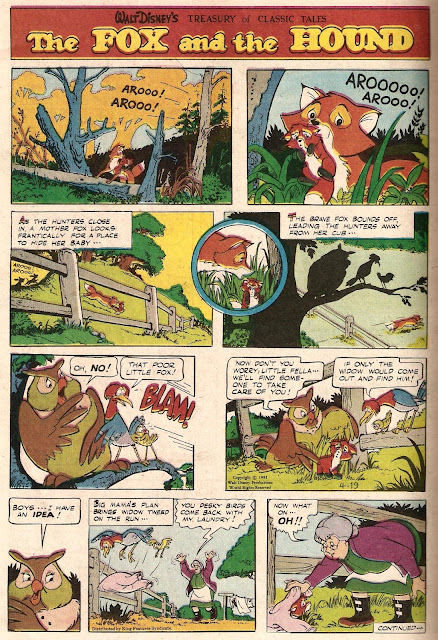 And then there's The Fox & The Hound, probably one of the most depressing movies ever made. 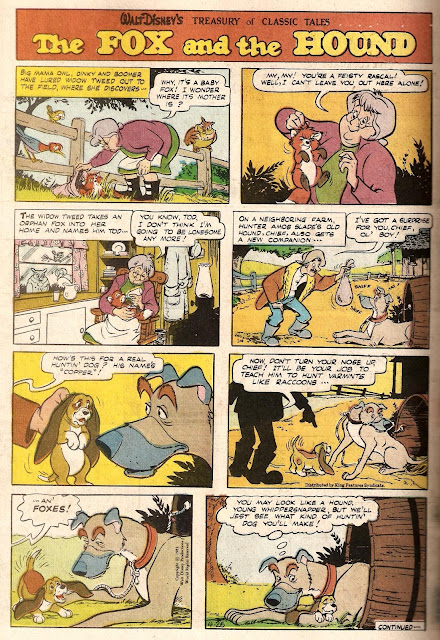 Though, if you've been browsing clickbait links, you may have come across a factoid that the book was Miles more soul-crushing.  The story changed from a parable about how our roles in society determine our motives, to a fable about childhood friends from opposite sides becoming unintentional enemies. 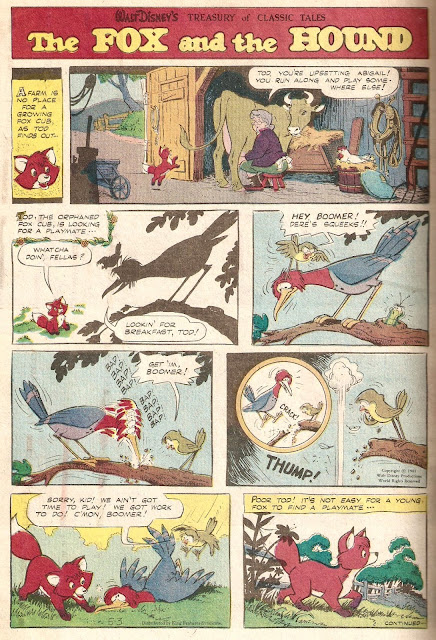 Finding a dead tree version can be considered costly, since it hasn't been reprinted since its publication.
Fortunately, there's an electronic version available, so it isn't completely lost to the ages.  (Too bad I can't stand the platforms, since their scrolling pages give me a headache)  The majority of the following is lifted almost verbatim from the TVtropes Literature page, with minor revisions. 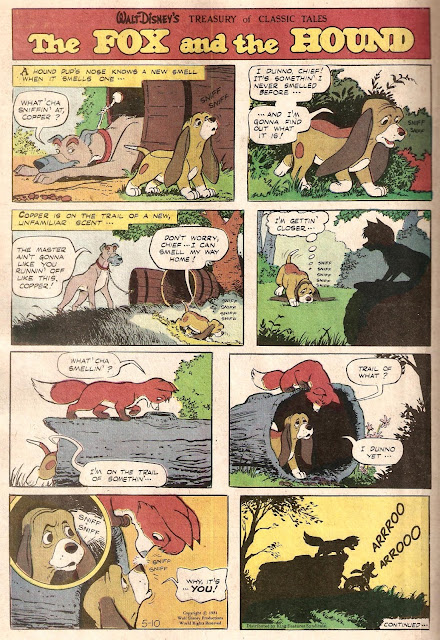 Ironically enough, the book's theme more closely resembled the atmosphere surrounding the Animation studio in producing the cartoon film.  As one of the final projects completed by the remaining fabled Nine Old Men, the movie was plagued with a troubled production history.  There were numerous conflicts of interest between the old guard and the new generation on how to best do background details, and refusal to use the latest technology under budget restrictions. 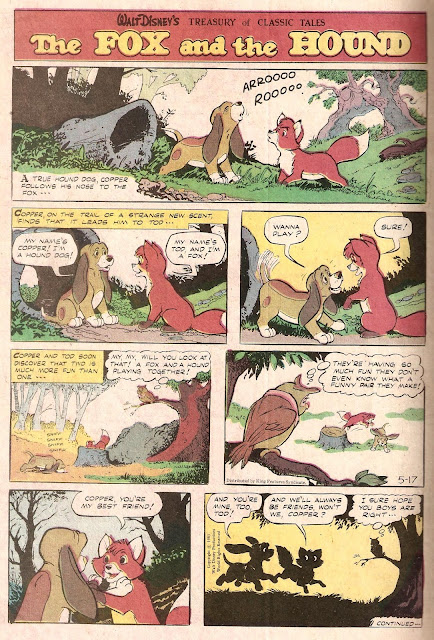 The result was Don Bluth becoming discouraged over the 'stagnant' Disney, moved out with a dozen other animators to found his own company... which specialized on lengthy chase scenes and nonsensical plots.  Still, for all his faults, he was the closest thing Disney had to a legitimate rival for a very long time.
Tim Burton was reportedly so traumatized over being unable to draw a fox properly ("my drawings all looked like roadkill") that he didn't return to the company for almost a decade. 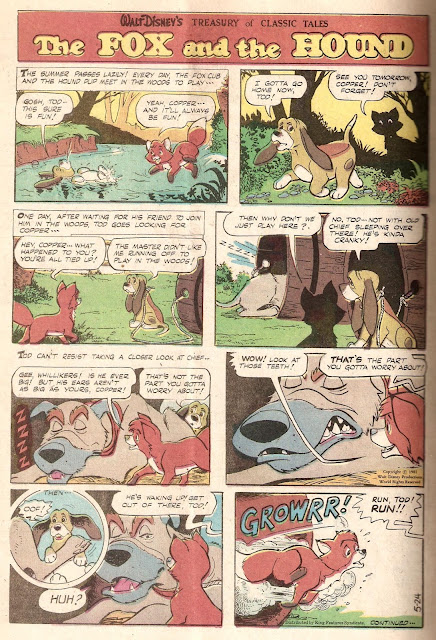 Tim Burton literally went insane trying and failing to replicate the Disney style. Highlights from his tenure include locking himself in his closet, biting people who came near his desk and wandering the halls after having his wisdom teeth pulled and letting his mouth bleed all over the floor. His time at Disney didn't last much longer. 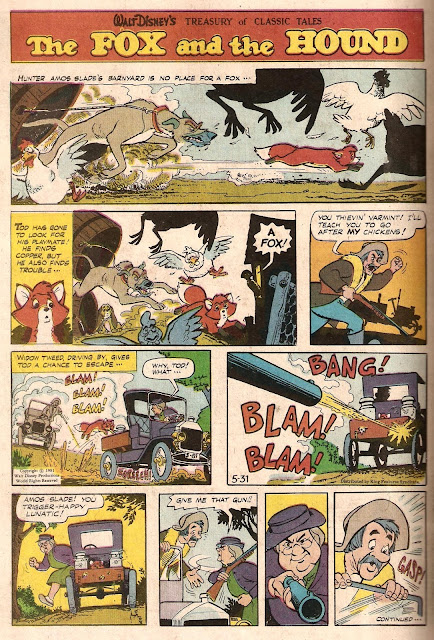 While there is a hound named Copper and a fox named Tod, that's pretty much where the similarities end. For starters, the two never meet or spend much time in childhood to form a lasting fraught relationship that's doomed from the start.  Instead, the titular fox is raised by a hunter (not the same one who killed his parents) who's also raising a terrier puppy.  To prepare his pets for the outside world, he runs a simple experiment on them by rigging up a plate of food to deliver a shock if touched. The terrier takes several shocks to get the idea, and completely forgets the plate's unpleasantness in a few months. Tod gets shocked ONCE and never goes near it again.  A trait of learning things quickly, which is essential for survival. 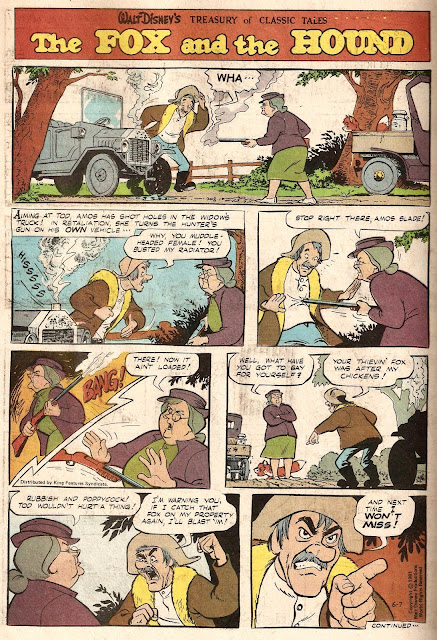 Another difference is the portrayal of the animals' mindset, which is closer to Patrick Süskind's Perfume.  From their point of view, their major import of information comes from their overwhelming sense of smell, rather than sight.  Copper's eyesight is so bad that he seems to consider clear colour vision to be a Bizarre Human Sense. 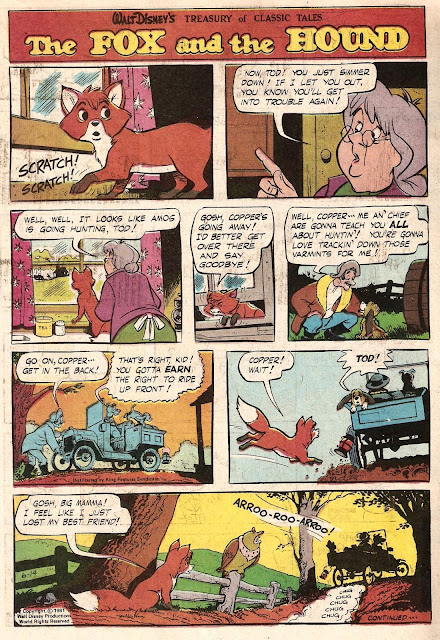 Also, Tod's repertoire of hunting skills and evasive maneuvers are made up of various tricks that worked once and are repeated verbatim - he doesn't question WHY something works, he just knows that it DOES. 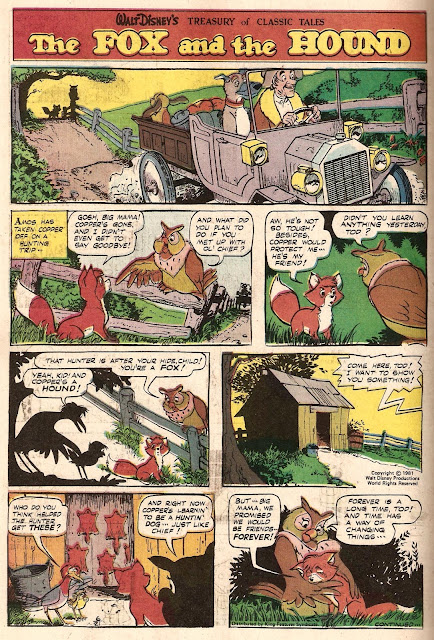 Copper knows that "human beings had strange powers that no dog could understand", such as the ability to miraculously scent trails where he cannot (which was more likely following footprints and broken branches). The formal foxhunters are even more bizarre and inscrutable. Tod is probably the character least awed by humans, and even then they still do things he finds inexplicable from time to time. 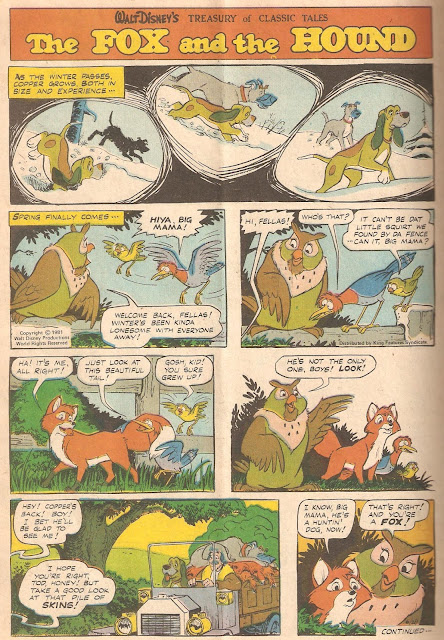 Untrained curs are dumb - trained hounds can smell right through most fox tricks. 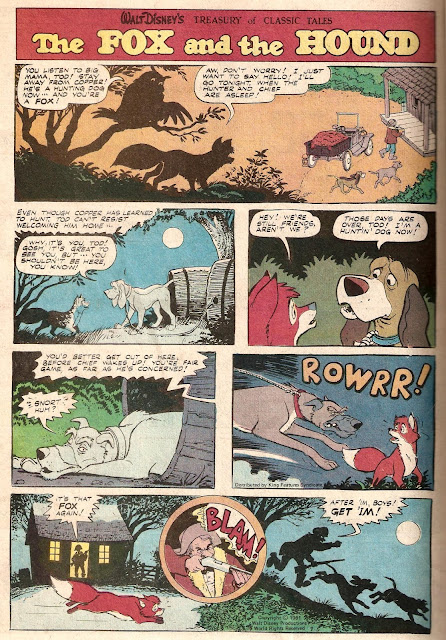 The author, Daniel Mannix, spent over a year studying foxes, which included watching them in the wild, interviewing hunters and even keeping a pair of red foxes in his home. He was also extremely well-versed in how scent tracking works. It shows. 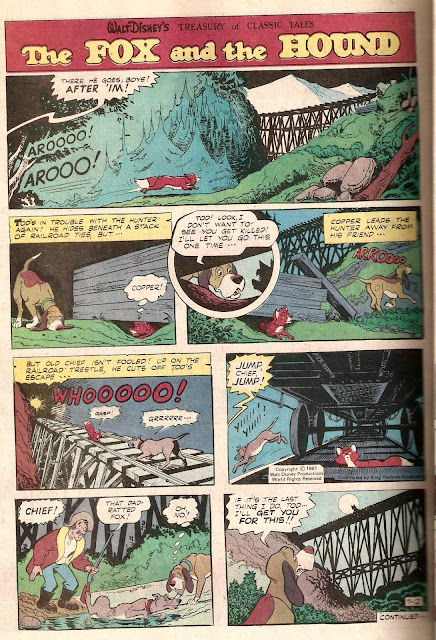 One of the few rare instances that a scene is actually taken from the book.  But there were several minor differences involved.  For starters, after Tod played a dangerous game of Chicken with an upcoming train, Chief pretty much died after this gambit.  While this was the motivation behind the hunter beginning a life-long vendetta against the fox who'd killed his beloved dog, Copper's reaction was markedly different.  Copper was actually GLAD that Chief was killed, since his mentor picked up scents by luck, rather than in a methodical way Copper did. 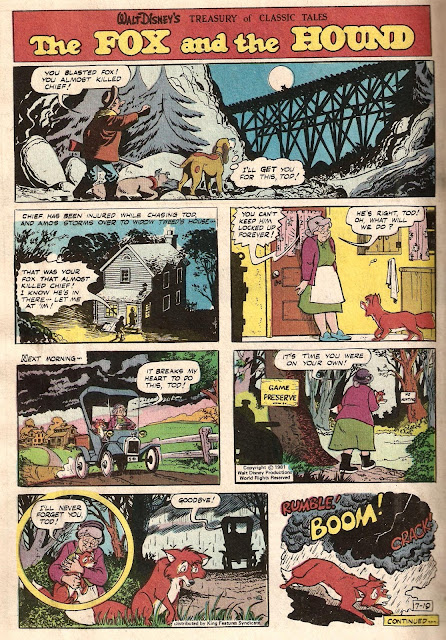 Another major difference is that Book Tod pretty much hates being domesticated, and as soon as he approaches puberty, he leaves his foster home to join the wild, where he learns new survival skills the hard way - trial & error. 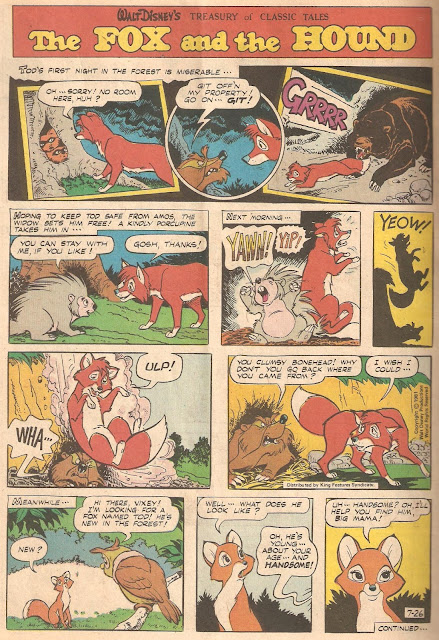 Tod decides being a mated fox might not be so bad after his first mate helps him kill a pheasant and later proves that a hunting pair is a lot more successful than a lone fox. 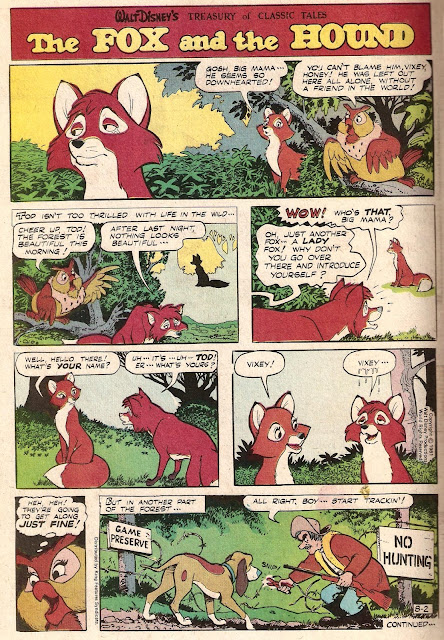 There were actually two Vixens who attracted Tod's attention.  The first one was lost to a rival fox Tod fought over.  Tod wouldn't find a suitable replacement to make babies with until later. 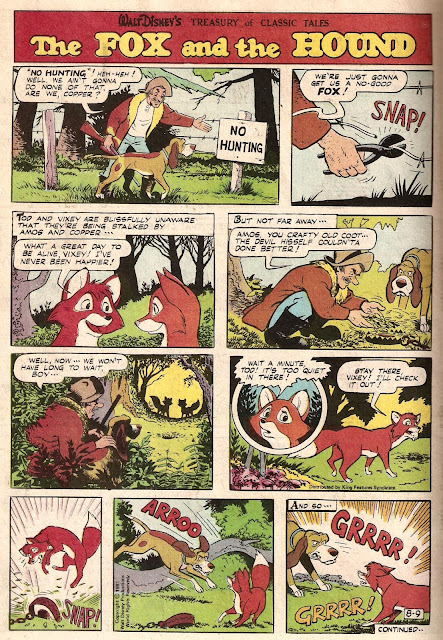 Foxes of course do not have language (In Japan, they make a 'Kon' noise), so fox parents cannot simply tell their offspring that winter is coming and that it would be a good idea to learn hunting skills in summer. Tod cannot communicate to his family that the hunter is using a rabbit-scream call as bait. 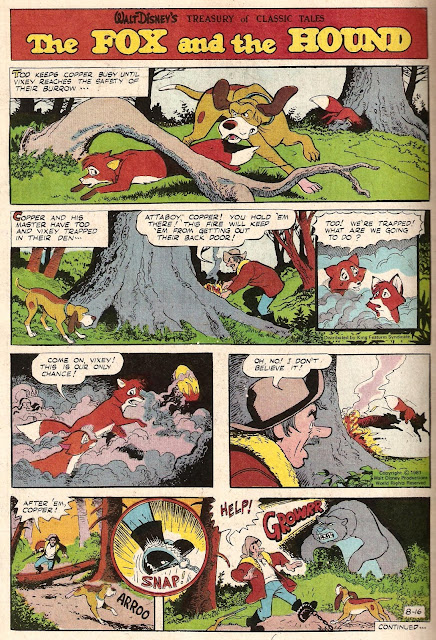 The second vixen Tod mated with picked a birthing den that had a single tunnel leading to a single burrow. Unlike the care-free Tod in the movie, Book Tod was more paranoid..  Having spent his short time as a wild pup in a generations-old fox den with multiple entrances and burrows, thinks the new home's a death trap. He's right.  The casualty report - his vixen is caught in a bear trap, and of the two litters who were outright killed, only one pup survived, and presumably lived off-screen. 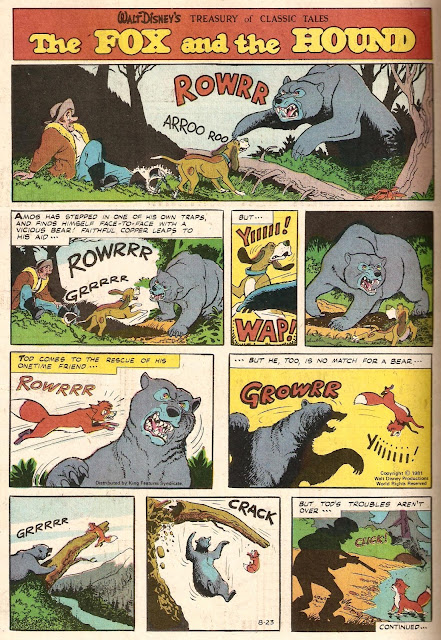 There WAS a Bear attack in the book, but it happened earlier, practically near the beginning, and it was Chief who saved the day, by attacking... the bear's groin area.  Obviously, that couldn't be shown in a children's movie, so they resorted to having him fall off a log.

Most British fox hunts last for an average of 17 minutes.  The last chapter, which details the lengthy cat-and-mouse chase between the Fox & the Hound lasted... a day and a half, covering 150 miles.  This was based on a real hunt, with a Fox named Baldy, and a half-breed bloodhound named Boston.  At the end of that hunt, both animals literally chased themselves to death, dropping dead from exhaustion.  Book Copper fared better - he survived. 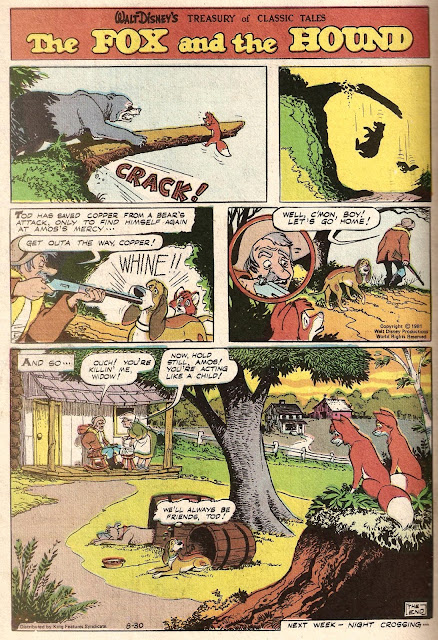 ...only to have his fate sealed for him shortly after.  Once Tod is killed, more through second-hand status ailments than cathartic release, the hunter has no other purpose left in life.  With most of his property gone in the process, the hunter is forcibly ferried into a nursing home that doesn't allow dogs, so to avoid abandoning his faithful friend who's stuck through him thick and thin, he's forced to shoot Copper before entering.  Cheerful, huh?

The worst part was that Copper was so blissfully unaware of what the hunter had planned for him that he kept wagging his tail.  Once shot, the hunter hanged Tod's lifeless pelt on his wall, to remember him always.

To make up for that amount of Funky Winkerbean level of funkness, here's a child's drawing of the two titular characters in happier times. 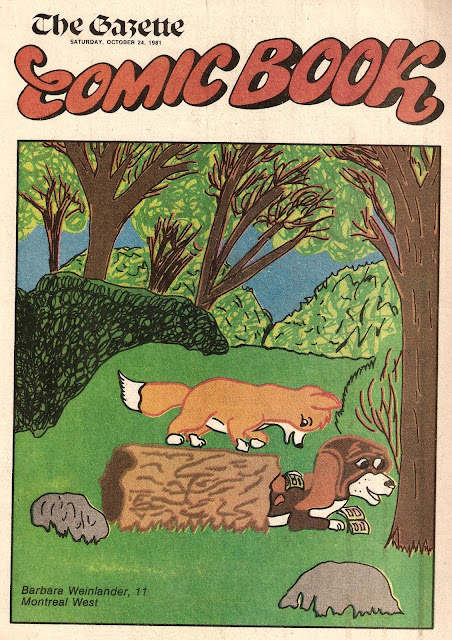