If the new collections adheres to this rigid standard, there probably won’t be any room for any of the doodles she did in place of the missing strips in previous collections. (Some of which were very memorable.) I’ve oftentimes wondered if there was ever going to be a collection of the comics she did for the Calendars, which were large one-panel jokes. Some of them were ripped off from the daily strip, while others were entirely new. 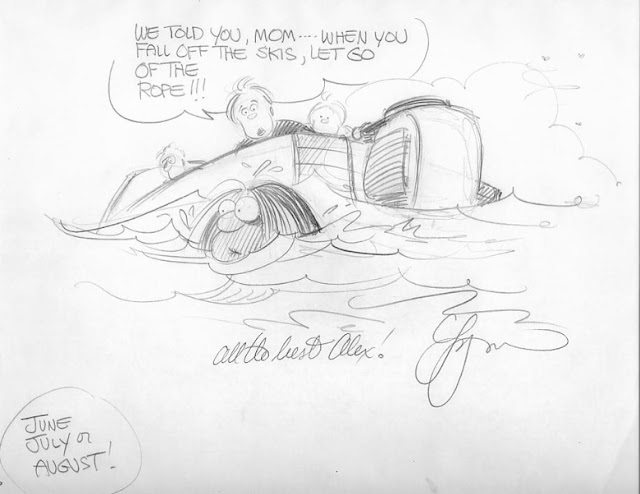 While trying to figure out how much of the previous collections would be in the latest omnibus, something else came to mind - I was thinking too much about a strip I used to care about. 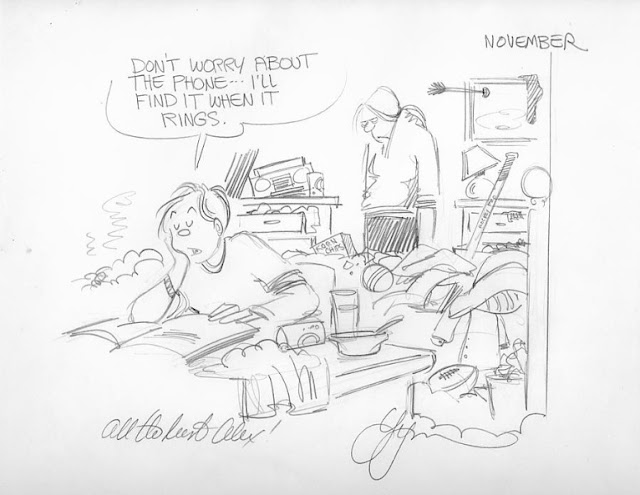 Lately, I’ve been wondering if the FOOB Livejournal has any further purpose to its existence? It no longer has as many visitors as it used to in its heyday. Most of its audience has left for greener pastures, leaving only the dedicated who’ve stayed. The last group of faithfuls include trumanf, aprilp_katje, dreadedcandiru2, forworse, and howtheduck. Not to mention that the AllFOOBedUp parody page has stopped updating after the last of Lynn’s new dailies stopped circulation. The other parody sites, Foob's Paradise concluded last year, and The Fifth Panel hasn't updated since March 17th. The only new element is Elly's twitter, which updates infrequently, and would be funnier if we had the comics they were referencing. (Something that Coffee talk with Warren & Paul solved) All they’re essentially doing at this point is preaching to the choir to the faithful few who’ve stayed.

At this rate, they run the risk of only talking to their own audience in the same way that Lynn was surrounded by adoring fans. When nobody has any substance to say, any further talks loses all meaning. I’m reminded of how Dirk Deppey of The Comics Journal finally decided to end his continual arguments with Brian Hibbs over selling comics at the bookstores - he decided to leave one final argument and go home. He’d only refer to that article if the man decided to bring up the issue again. There comes a time where it’s easier to stop making the same argument every time, especially if you’re not going anywhere. There are other things worth wasting your energies on.

Everybody knows that Peanuts in its last decade wasn’t as good as Schultz’s work in its peak years. Yet you don’t hear anybody constantly harping over those lackluster strips. The only defender of those later strips was, ironically enough, Bill Watterson. Although he was constantly bemoaning the limitations of the Newspaper strip, he continued to lavish praise on his favorite cartoonist.

I have a tremendous amount of respect for Peanuts. Every now and then I hear that Peanuts isn't as funny as it was or it’s gotten old or something like that. I think what's really happened is that Schulz, in Peanuts, changed the entire face of comic strips, and everybody has now caught up to him. I don't think he's five years ahead of everybody else like he used to be, so that's taken some of the edge off it. I think it's still a wonderful strip in terms of solid construction, character development, the fantasy element...Things that we now take for granted–reading the thoughts of an animal for example–there's not a cartoonist who's done anything since 1960 who doesn't owe Schulz a tremendous debt.

The problem was, compared with the earlier Peanuts, there were week or month-long stories, and we were reduced to one-panel jokes. There were very few highlights other than Rerun experimenting with Underground comics. I would’ve liked to see more of Lydia, the girl who continued to infuriate Linus by constantly changing her name and because she was born a few months after Linus, always asked, “Aren’t you too old for me?”

The FOOB Livejournal certainly didn’t think that Elly was a horrible woman until the last ten years or so of the strip. If the people at the FOOB journal are reduced to talking about how dysfunctional the Pattersons are, then they’re grasping at straws. For a REAL dysfunctional family, they should check out Alan Moore’s The Bojeffries Saga, which is like a British version of the Addams Family.

Not to mention that with no newer strips coming from Lynn Johnson, what else are they going to focus on? How long are they going to re-analyze the older strips with the same mean streak? Until John & Uncle Phil goes on the canoe trip that opened up the FBOFW world and showed more than just Elly’s viewpoint? That could be years off, and could be very tiring to continuously hear nothing but negative interpretations of Lynn’s mental state, now that we know how much of a messed up person she is. I’d rather enjoy the story these people make, rather than be constantly reminded of what kind of people they are.

There have been many people who’ve tried to get through Dave Sim’s ambitious comic, Cerebus one issue at a time, but they’ve never gotten further than the first volume, which was Sim’s weakest, back when he was still experimenting with the form. Even the CereBlog, which found new historical interpretations for those early stories never even made it halfway through.

It’s a strange thing that Lynn Johnson and Dave Sim (both of whom are Canadian) both got increasingly mentally hinged in their later cartooning days. So far, only Jim Unger (of Herman fame) avoided this escape into madness by retiring early. (Even though Jim was British-born, he later emigrated to Canada, but made one-panel comics there)

Part of it might be that Dave and Lynn were influenced by one of the unsung hero of the Canadian Cartoonist world, who’s only just now being recognized; Doug Wright.

Doug Wright’s works first appeared in the Montreal Standard, which was released bimonthly (every two weeks) which is why he wasn’t widely known outside his country. He wasn’t well known, even in his home country, which is something Fantagraphics is trying to change with their release of two large hardcovers of his works. Granted, these collections can be daunting for the average customer (the things are the height and width of a small table), so it’s fortunate that a more user-friendly collection, Nipper has been announced.

Nipper was created before Hank Ketchem’s Dennis the Menance, and with his bald head, was considered to be a homage to Charles Schultz’s Peanuts. The difference between these two being that Nipper was entirely silent, with only a few sound effects and store signs being the sole exception. Not to mention its unusual format - every strip was vertical instead of horizontal, and was in black and white and red.

As Lynn Johnson wrote in the foreword to the collection, “The Doug Wright family was what I wished my own family was like.” Indeed, the boy wasn’t bratty 100% of the time - he had brutish tendencies, but didn’t act on all of them. And the parents could be exasperated, but could be just as understanding in the same instance.

There were even two Nipper comics that inspired two FBOFW strips. If you’re going to rip off someone, rip off from the best, and an obscure source. (Sorry about the discolouration - I couldn’t fit the entire book on the scanner, which should give you some idea of how big the collection was)

More than anything, I’d like to think that FBOFW had more good influences than bad. Raina Telgemeier, the illustrator of The Baby-Sitter’s Club even said she based her drawings on a FBOFW pastiche. However clean her works look, I feel it suffers from an insistency of sameness, where the profiles are identical throughout the stories. It might not be obvious to younger readers, but to a comic veteran like me, it’s glaringly obvious.

Then there’s Lynn’s background stories, which would happen in silence while the main story was in the foreground. Next to the fighting clouds between Mike & Liz (which were always different every time), these were some of my favorite details in FBOFW. Samm Schwartz (the definitive Jughead artist) used this kind of thing all the time, and was a popular element in the early Yakitate! Japan chapters. 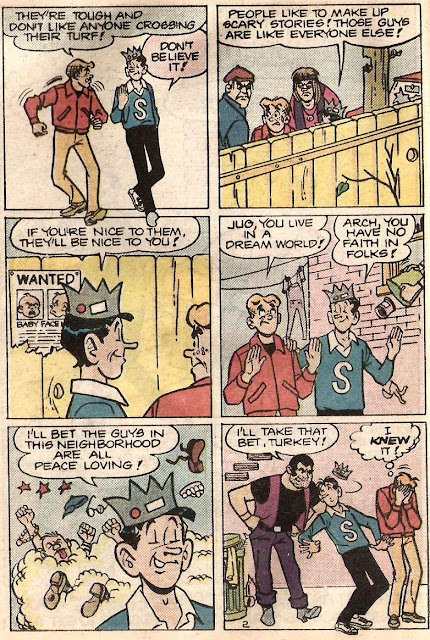 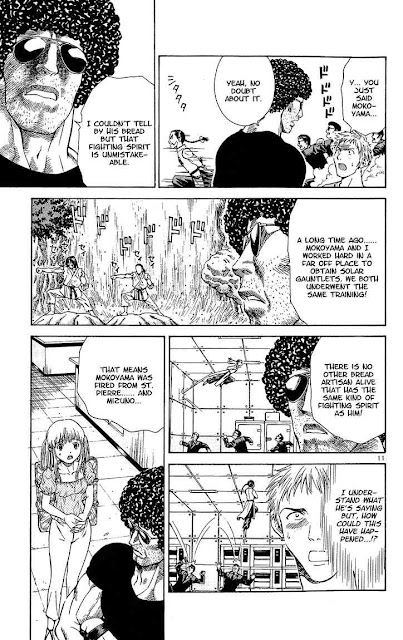 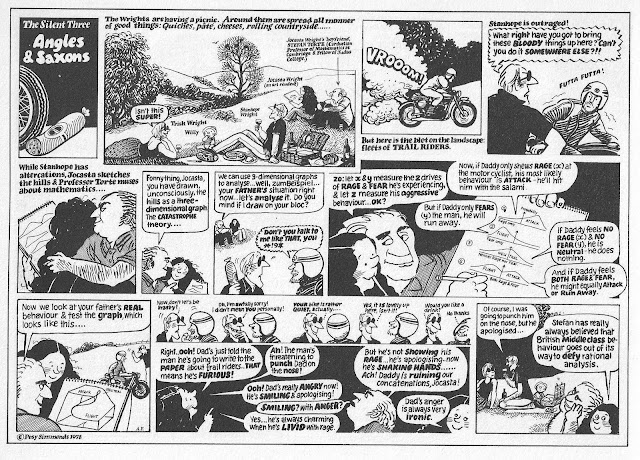 Not to mention there’s plenty of Family-friendly French BDs that’s never been translated that would be a big hit on this side of the shore. One title that comes to mind is Margot et Oscar Pluche (later shortened to Sac a Puces) [Fleabag in French]. It’s about a Girl & her stray Dog, her large family (6 children, counting Margot, not counting the baby who was born at the end of a later volume) 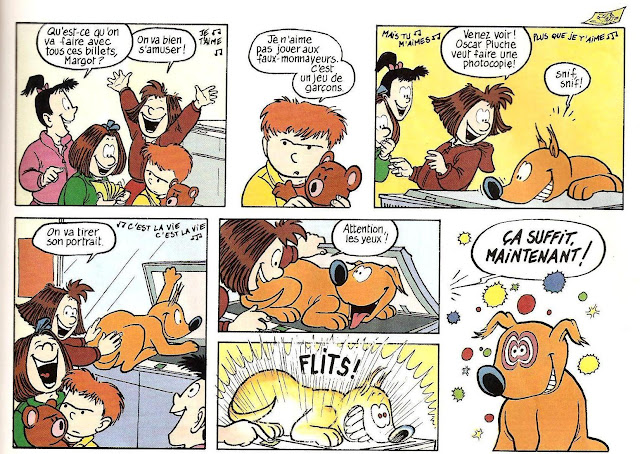 Then there’s Nathalie, who has shades of Calvin in her. She has grandoise plans of traveling to exotic places, oftentimes involving her baby brother who she rentlessly tortures every other strip. Her father’s being a workaholic and her mother suffering from maniac depression surely have nothing to do with her antics. Not to mention her Uncle looks and acts a lot like Uncle Phil in his early days. 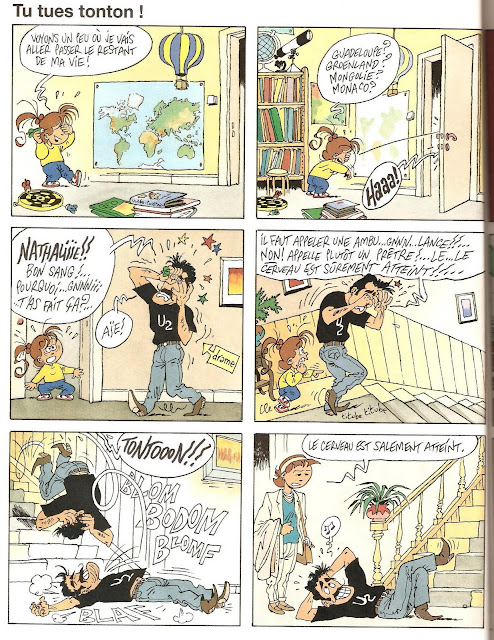 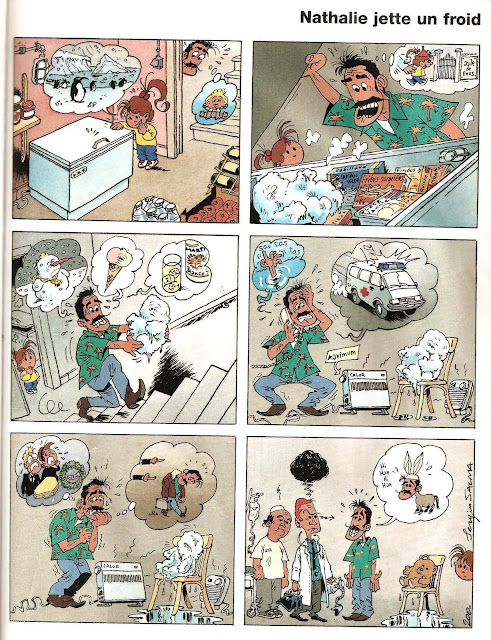 Of the translated BD family strips available over here, only Cedric from Cinebook has been brought over. Apart from bringing home bad report cards and having a crush on the Chinese girl, he’s pretty much like any other kid. You haven’t lived until you’ve seen his Grandfather laugh. 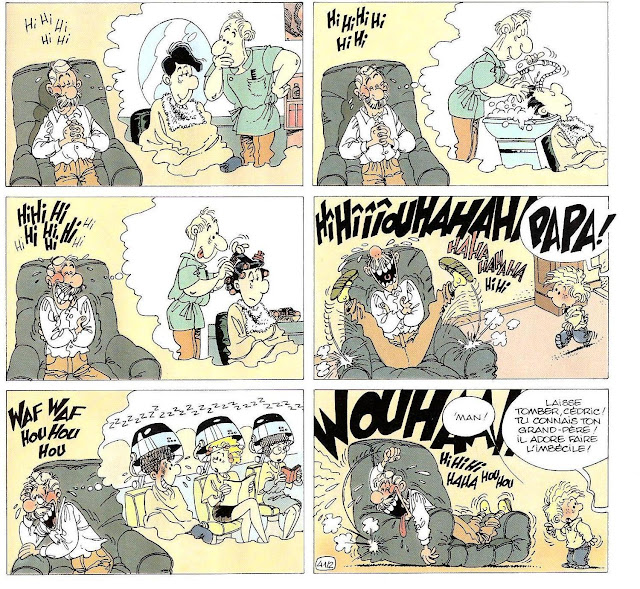 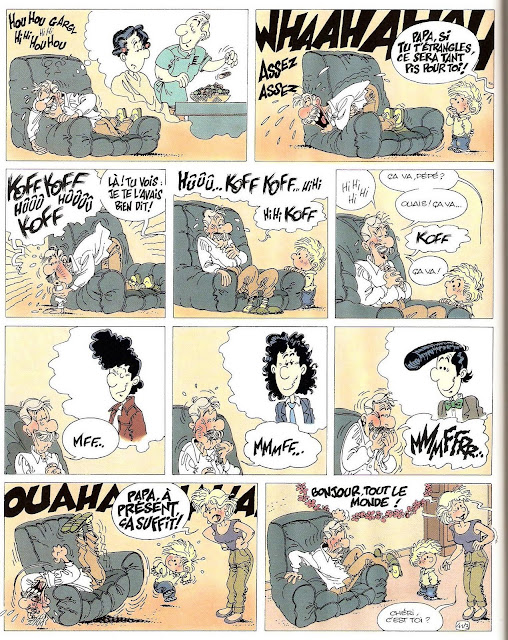 Anybody hoping to find a new Family Newspaper comic strip on par with FBOFW in its peak years should give up. You’d have more success finding a webcomic capable of filling that role. Their autobiographical comics are nothing like the self-loathing Robert Crumb versions that Indy comics are most reputed for. They’re more likely to have humourous elements, the good with the bad, and have visual metaphors in the mix.

What I worry about is not the stagnation of comic writers who develop a rut in their style, but the legion of comic fans who simply stop looking for something better. Sure it’s safe to stay within the comics you’ve grown up with, but that also cuts off your possible enjoyment of other comics with better potential. It’s always scary venturing out into the unknown, especially if there are some known stinkers out there. But the pay-off is worth it for those willing to devote their time and effort. For the less adventurous out there, having a helping hand to traverse these unknown waters could be a huge help.
Posted by DeBT at 1:45 PM