Recently, there was the news that one of Japan's Black Hole Satellites just mysteriously reappeared with no explanation, spinning wildly and emitting strange undecipherable sounds.  In addition, it sounds remarkably close to the plot of Event Horizon, a space-horror movie that's ACTUALLY scary - a rarity in itself. 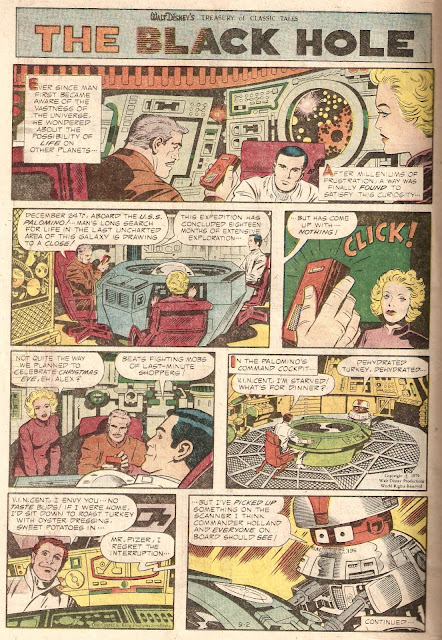 There were also claims that it sounded similar to another lesser-known Disney B-movie, that previously was only seen in bits and pieces elsewhere, either in another language or recoloured. 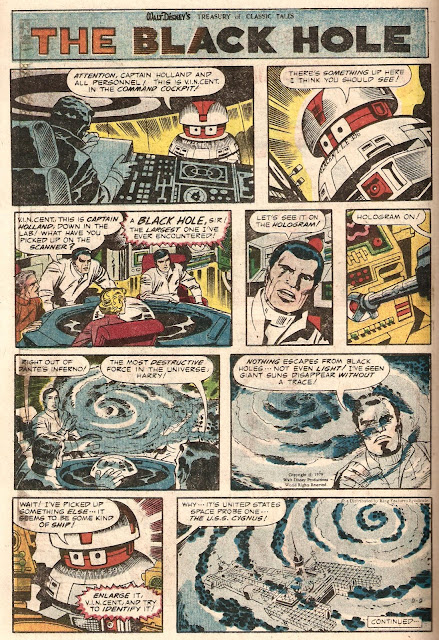 Back when my paper first started out printing Sunday comics in pamphlet form, their main export was various Superhero titles, such as Superman, Spider-Man, The Incredible Hulk, with Mary Worth and the occasional family-friendly fare tossed in for good measure.  Soon, the flux of serious art would get phased over for more cartoony flair, which appealed and disappointed various readers.  Even then, there were some diehards who complained that removing these serial stories was ruining the comics page.  Nevermind that the format - a narrower panel and page margin with the risk of art and text becoming intelligible due to image reduction and constant recaps every week or day - would grate on the nerves of even the most faithful fans. 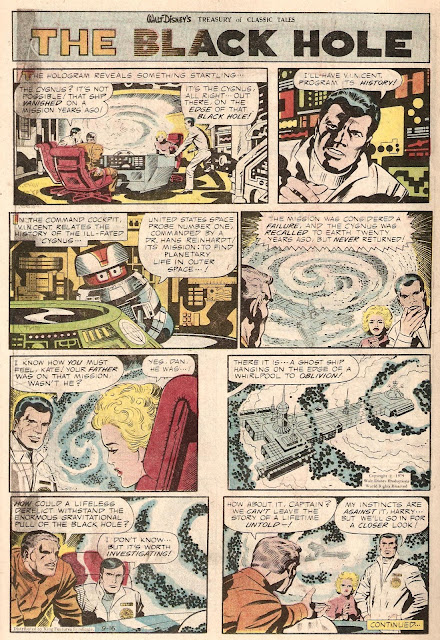 The impetus to release the Sunday comics in this format was to take advantage of the strip Walt Disney's Treasury of Classic Tales, which would choose various movies for the Newspaper, ranging from 13-20 chapter divisions, depending on how much story they wanted to tell.  Only a handful were ever reprinted, and memory of these have been mostly lost. 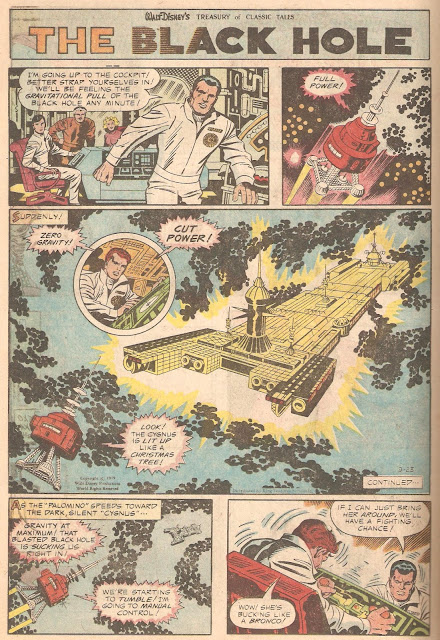 At that time, they were adapting Disney's Black Hole, also known as their attempt to cash in on Star Wars.  Ironic then, that Disney would eventually purchase the Star Wars license years later with more favorable results. 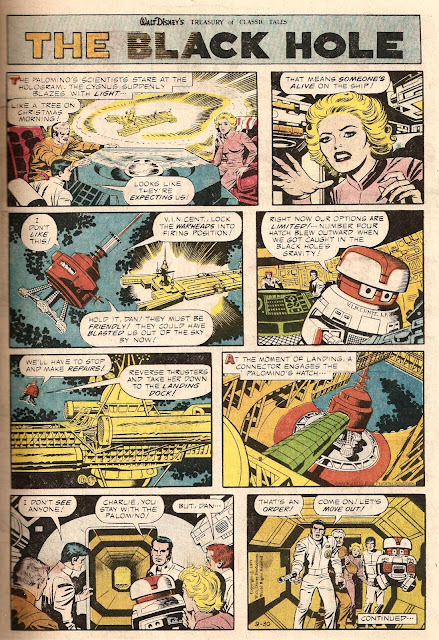 Most Disney comic movie adaptions were limited to 13-20 pages.  The Black Hole weighed in at a whopping 26 pages.  More after the cut, if you dare... 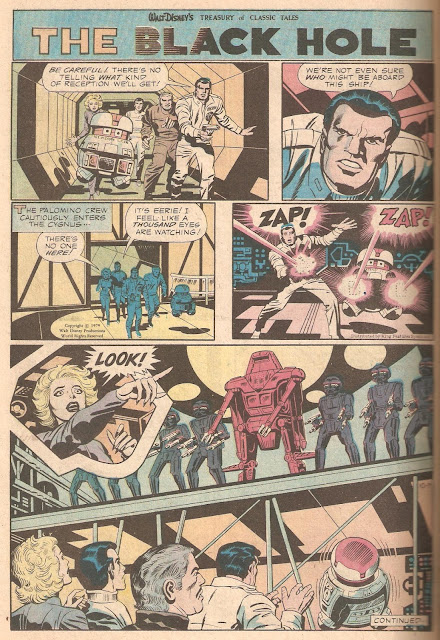 First off, I'll have to admit two things.  One - I've never seen the movie, though I've certainly seen the books, and my attention span starts to drift in the same way that the Star Wars movies does.  [One Point Five - I'm also not much of a Star Wars fan either] 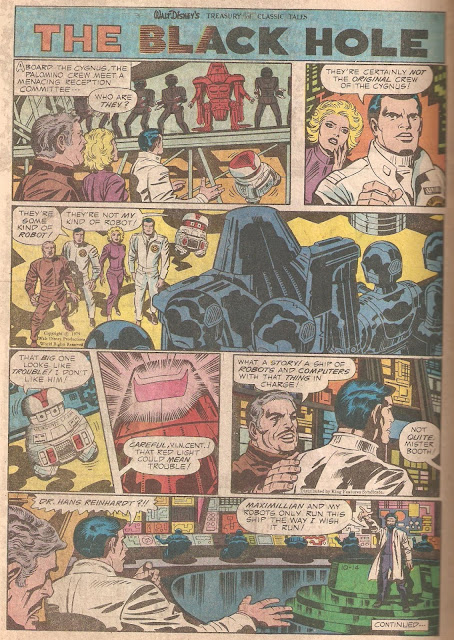 Looking at the setup for Black Hole now, it's clear that Dr. Reinhardt is based on the model of Captain Nemo from 20,000 Leagues Under the Sea. With a touch of Dr, Moreau thrown in for good measure, only with robots instead of animals.  What is it about arrogant overconfident scientists who go into exile to devote time to their research? 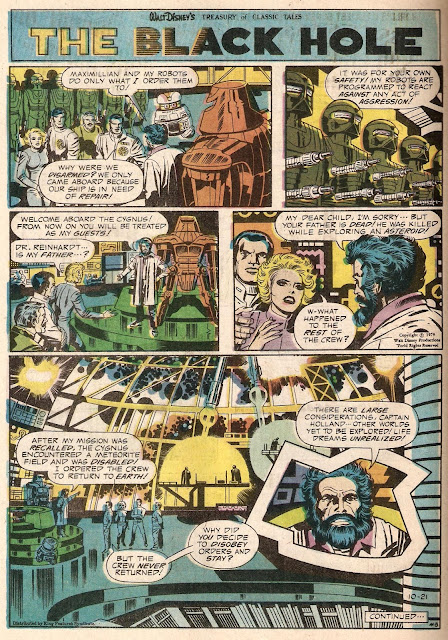 Two - despite the astounding amount of work Jack Kirby's done for the comics industry, I've never really warmed up to his artwork. 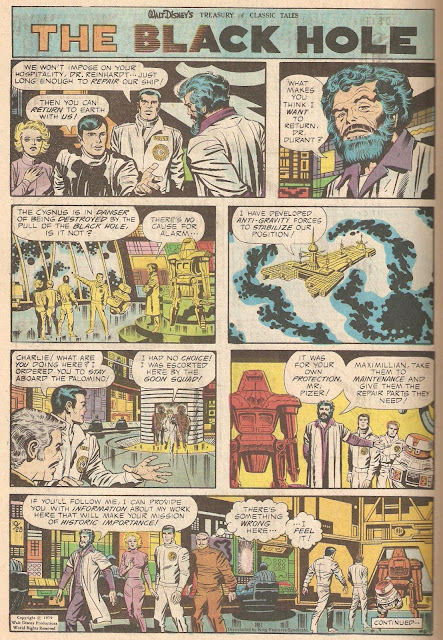 For some reason, when artists have worked on as many projects as they have, they start to believe that they should be capable of doing their own stories.  The theory goes that free of editorial influence, they wouldn't be bogged down for lack of ideas.  But the reality is that, unless they have a sound idea of a solid story structure that's not heavily reliant on certain narrative beats being sounded out, they're just as likely to wind up with incomprehensible trash. 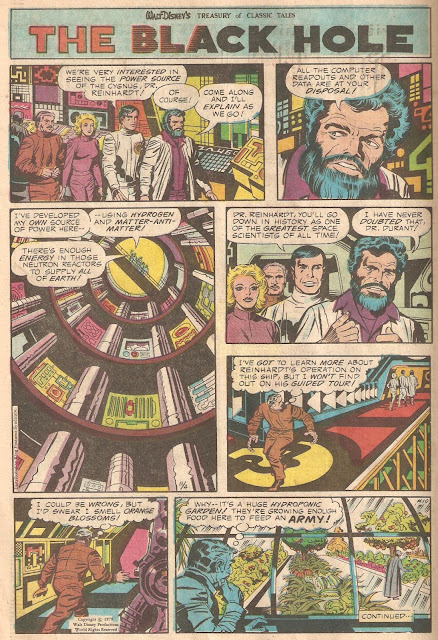 Having worked under the thumb of other writers for so long, Kirby felt that given the chance, he could write trashy fiction just like the pros.  As it turned out, there's a huge difference between writing disposable writing, and doing it well.  He fell into the trap of experience outpacing ability, and saw how easy and naturally writers were able to pull stories out of their hats (or rear ends) and figured he could do the same.  Only, when it came to breaking the patterns that he'd help establish ages ago, he wound up being unable to change beyond the most superficial elements, resulting in titles like Captain Victory and the Galactic Rangers, which wound up contradicting itself within pages of its own issue. 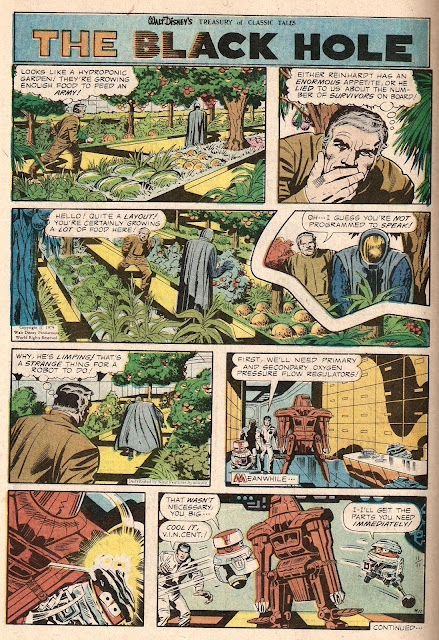 Neal Adams had the same problem, having drawn Batman and Deadman in his subsequent runs.  He felt that his experience with these titles was all that was needed to self-publish his own stories, when what was needed was stronger editorial influence to guide him towards a specific end-goal point, and maybe tone down his over-reliance on expositionary dialogue.  (The flip side being that we wouldn't have been able to enjoy the Batman Odyssey summary as much)  A quick purvey into his other titles, such as Blood and The Coming of the Supermen showed a distinct obsession about blood for some reason.  His forays into self-published failures such as Miss Mystic and Skateman gave him gave him the unflattering namesake of the William Shatner of comics. 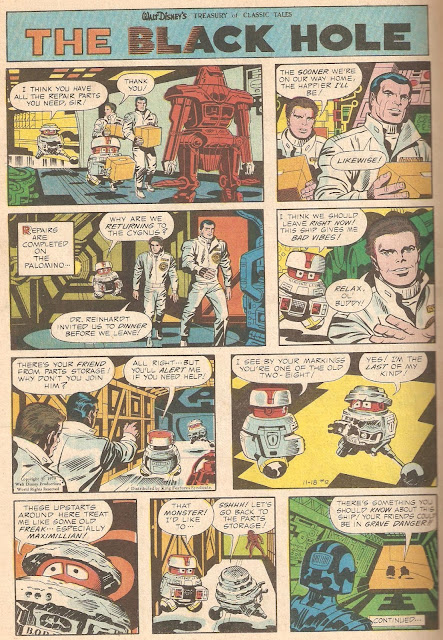 The Image founders had the same fault as well - they'd spent so much time adhering to the coolness of what they were drawing that they never considered that they could increase their circulation if they focused just as much on the story as they did in art.  (But then, that would've slowed down their already slow and late release schedule) 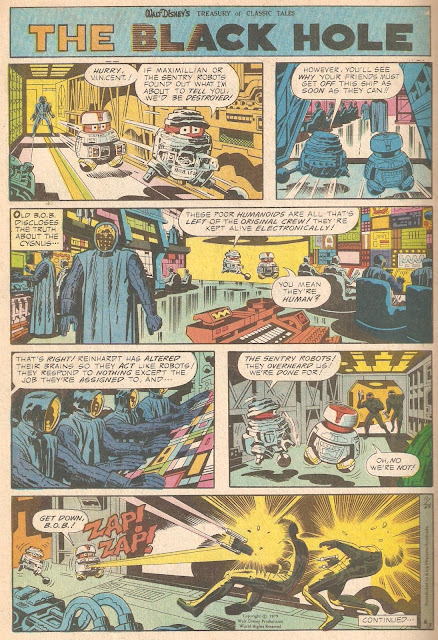 The latest roster of Image artists/writers has vastly improved since then, and filled in the hole that Vertigo publishers left after the unfortunate absence of Karen Berger, a long-running female editor, and then Shelly Bond was let go in favor of a sexual harasser. 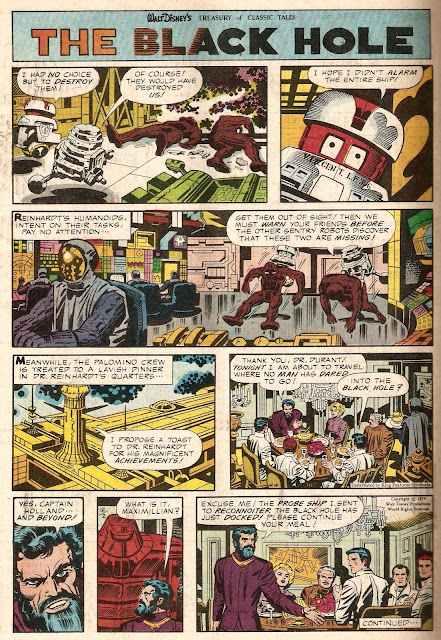 The above controversy is just a smidgeling sample of ineptitude as detailed in a scathing point-by-point analysis of Dan Didio's failure to maximize the ability of his comic company's contribution. (unless you count driving away capable artists onto worthier comic projects, such as Paul Pope's Battling Boy) 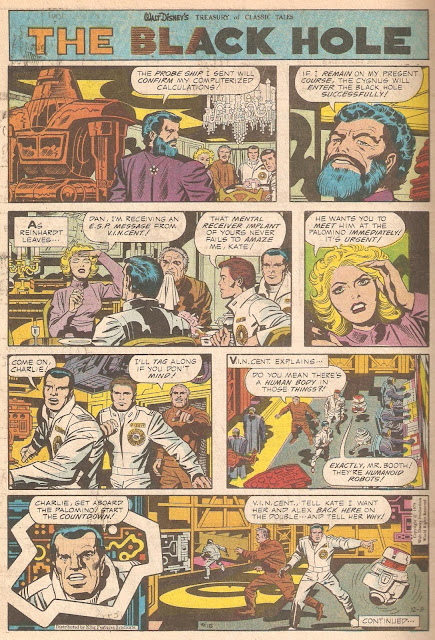 I seem to be having trouble with having anything of much substance to say, so I'll let the remaining pages speak for themselves. 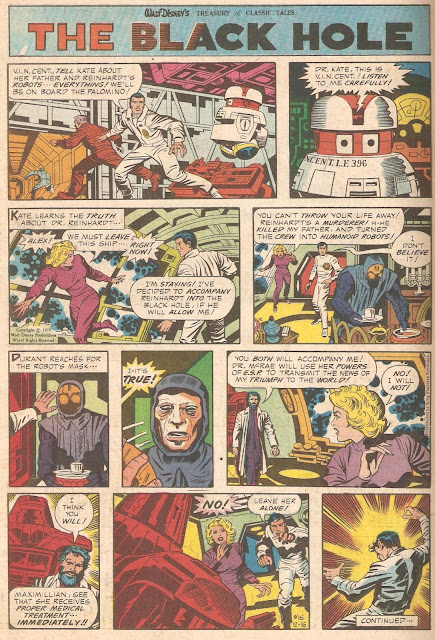 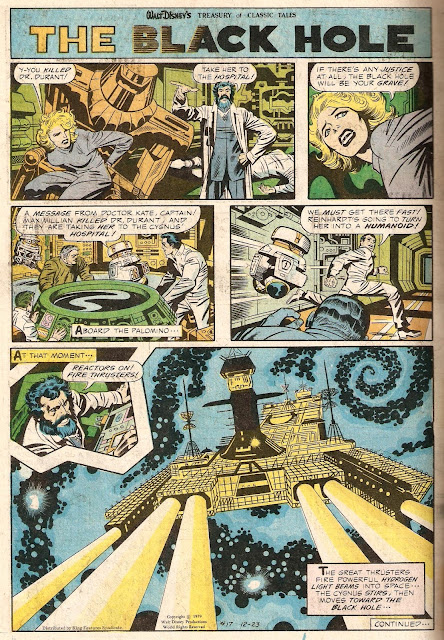 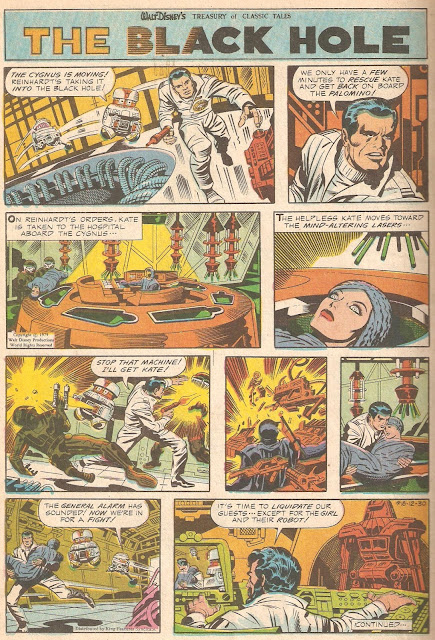 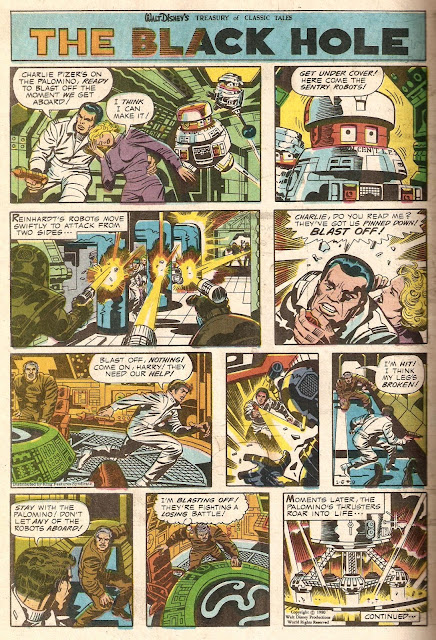 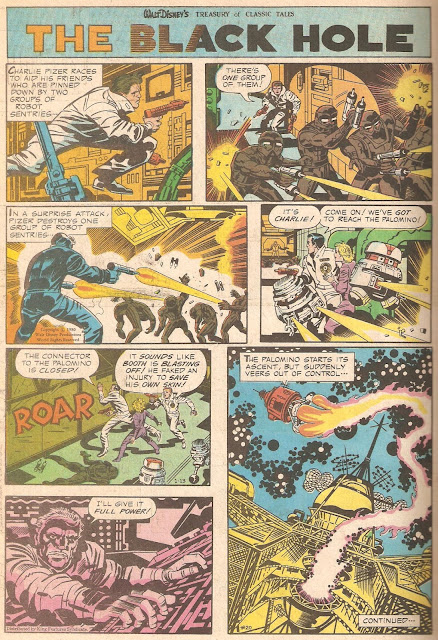 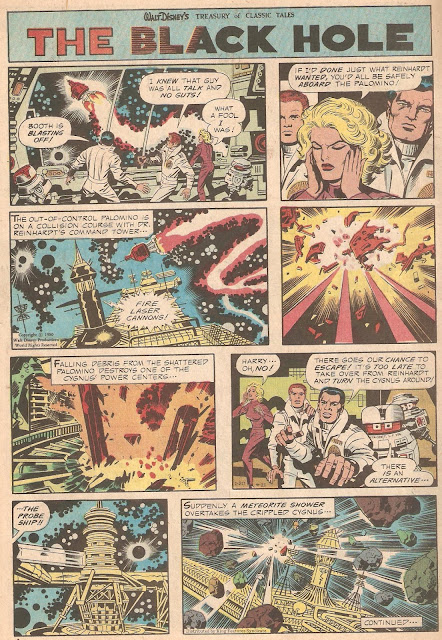 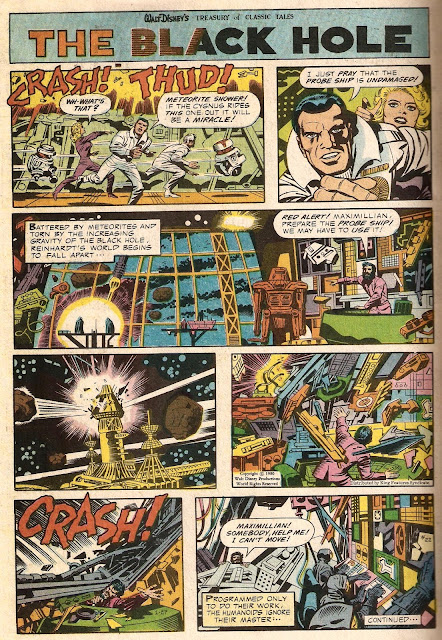 I'm just including the publication from another newspaper, because it has the title panel not seen above, and I'd spent so much time trying to find the missing gaps, and figured it'd be a shame to let all that effort go to waste. 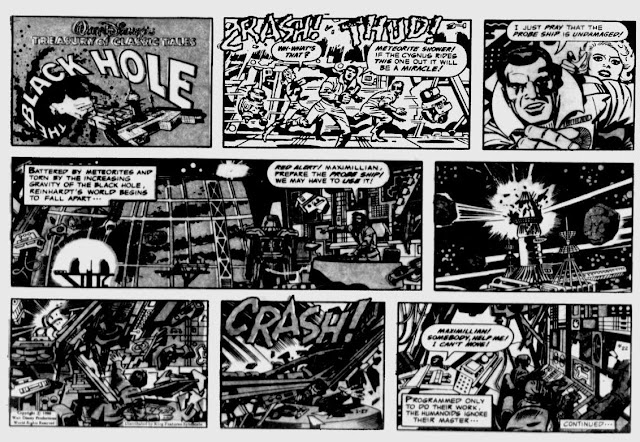 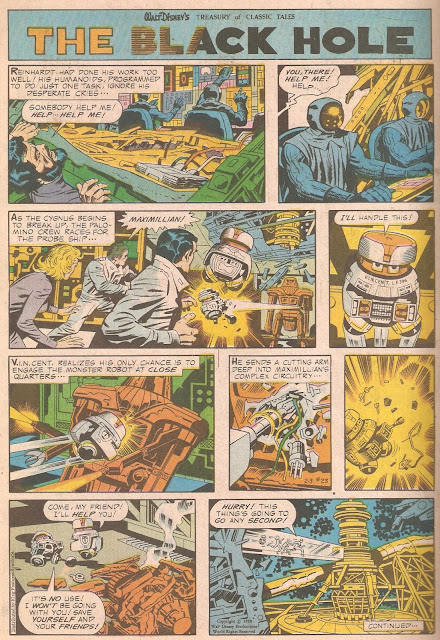 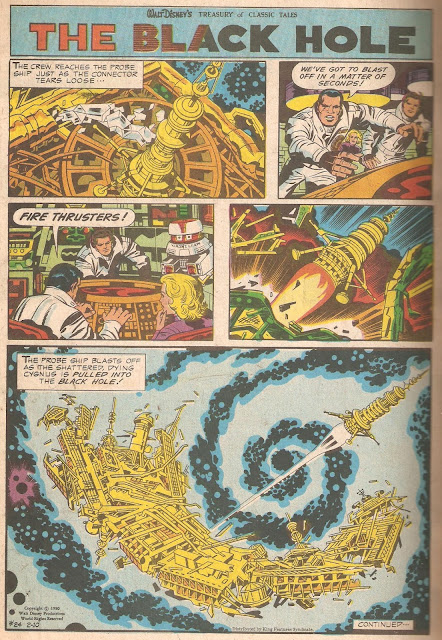 In the process of finding old Gazette comics, I almost completed my collection, but was missing the February 17th issue.  But that's fine with me, since I've got most of the story intact.  All that's missing are the superfluous throwaway panels, but they aren't absolutely essential to the overall essence of the story. 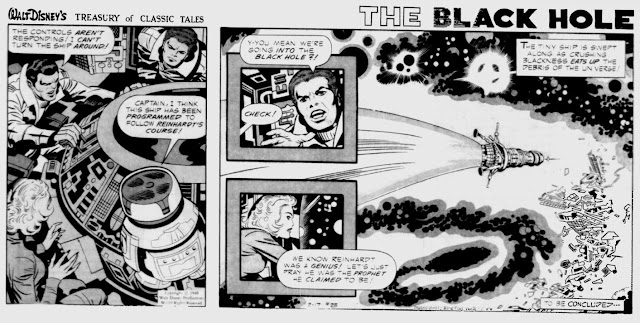 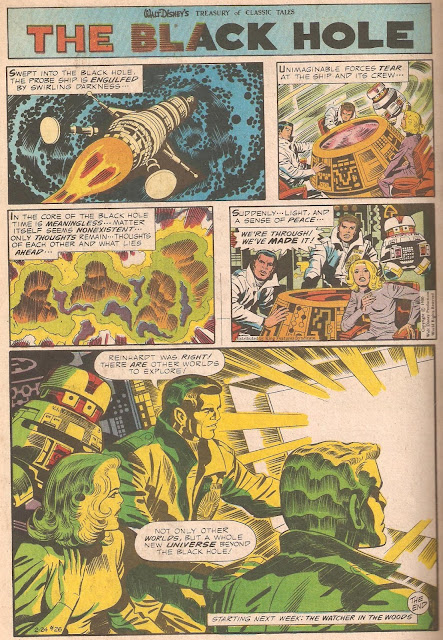