Condorman is no Birdman

When I posted my entry for the Black Hole adaption, I was going to wait until I was either A. told to remove it, or failing that, B. move on to the next movie on the list, The Watcher in the Woods.  However, my plan to do so was upended by a rare commenter who requested I move ahead a little in favor of another property that was considered more interesting. 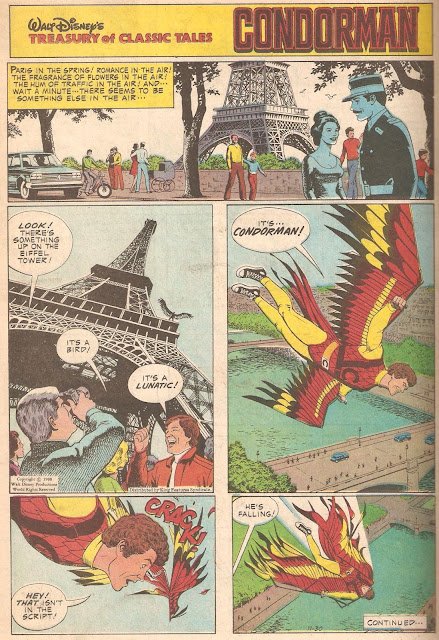 When it comes to comics and Condorman, most readers will zero in on the Whitman adaption.  Though for obvious reasons, I'll be highlighting the Sunday comic adaption instead.  In the wake of the surging popularity of Superhero movies, there was briefly floated the possibility of bringing back an old Disney movie that had gained something of a cult following among fans who enjoyed the goofy sensibility brought to the screen.  Not unlike the treatment given to Tron.  The thought was that if obscure C-listers such as Ant-Man could be updated with a tie-in to the larger Marvel-verse, then surely Condorman wouldn't be considered too out of the ordinary. 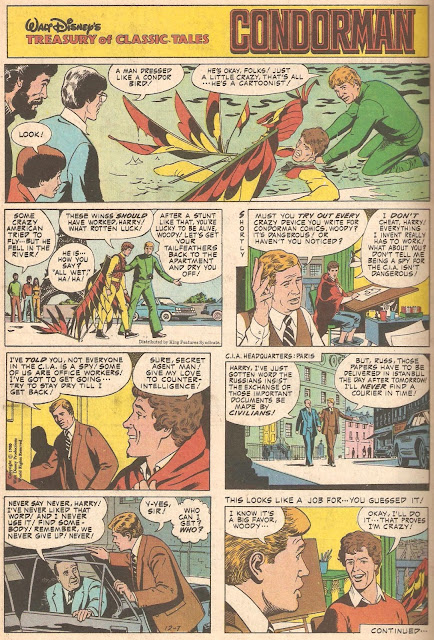 So, what exactly was it about Condorman that was different from all other brightly-garbed stuntmen out there?  Well, for starters, Condorman, alias Woodrow (Woody) Wilkins, is actually a cartoonist.  Just like Green Lantern Kyle Rayner.  Well, okay, he's not that much different then.  But he designs crazy death-trap contraptions while his brother works for the CIA...  If he were any more competent in his designs, he'd be a reliable Q.  But since this movie demands that he get out and go to exotic places and engage in wild wild things, he's chosen as an unsuspecting courier to deliver confidential documents all by his lonesome. 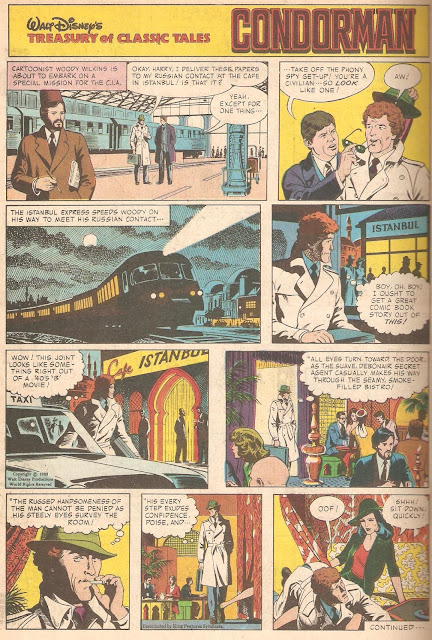 When it comes to reviving interest in old properties in the hope of saving having to think up new ideas, recreating old movies is a reliable standard to fall back on.  When it comes to certain properties, there are two ways that a beloved franchise can be shown.  The lesser used technique is to just showcase the hero already used to acting under undue pressure and circumstances, such as Tintin or James Bond. 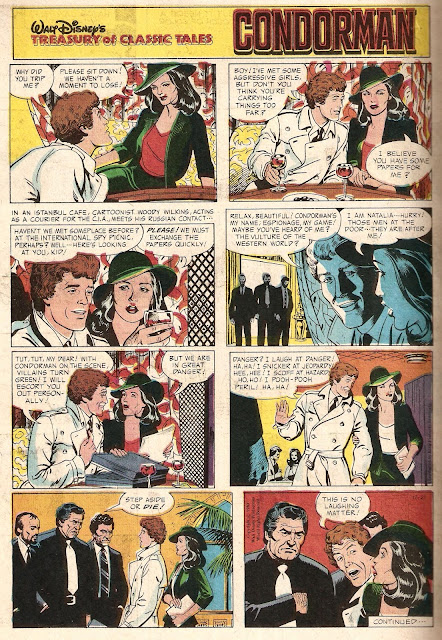 Most frequently, you're likely to be shown how the hero got their powers in the first place, which is normally an excuse to build up sympathy for the protagonist.  The constant harping on origin stories basically boils down to "We'll keep doing it over and over, until we get it RIGHT." 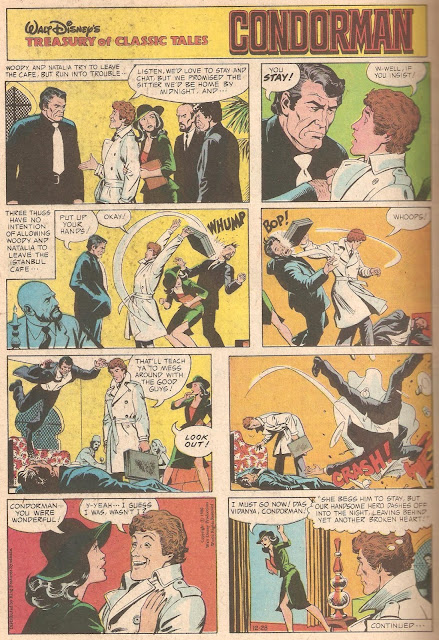 More Condorman after the cut. 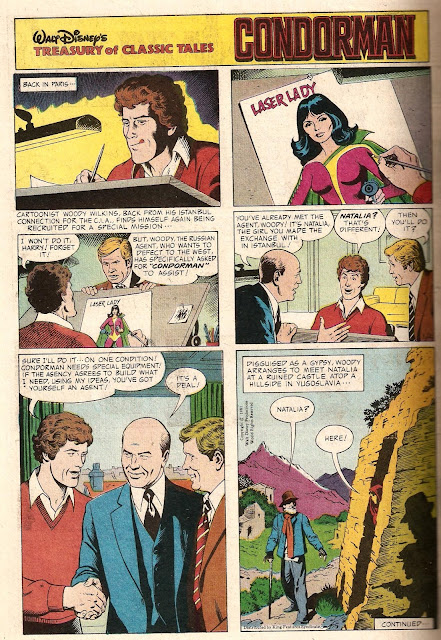 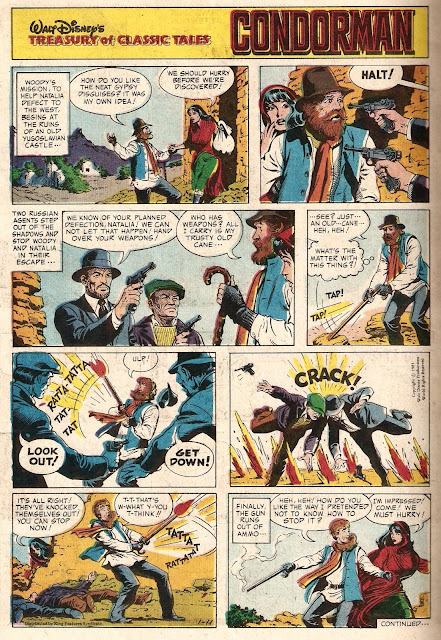 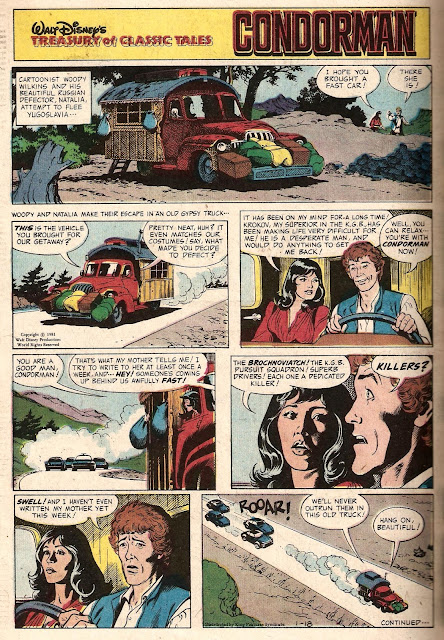 The January 25, 1981 edition is the only date I'm missing the colour version of, so you'll have to settle for this microfiche copy. 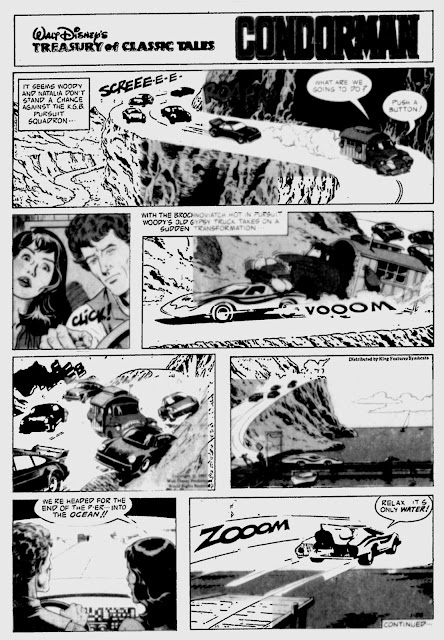 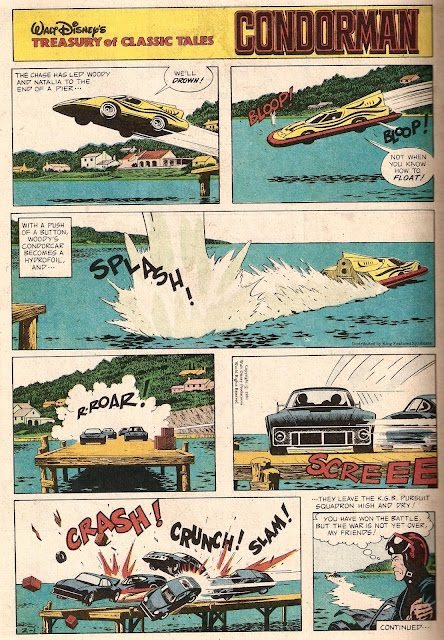 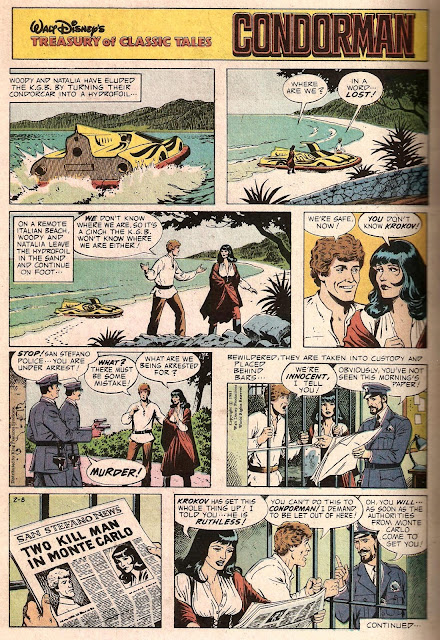 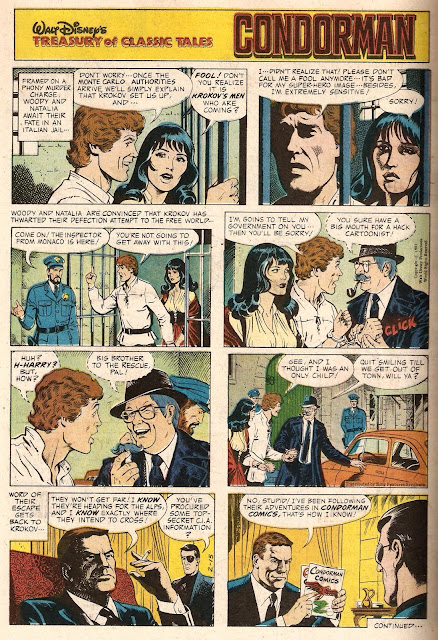 How's this for some grade-A rookie mistake?  You've got a total amateur spy who's somehow staying one step ahead of the KBG using completely unorthodox technology, leaving your enemies confounded in your wake and no idea of your thought process.  But they figure out your pattern by... reading what your next mission will be in the very next issue of the comic you're working on.  Production releases notwithstanding, even for a B-movie, that's a really dumb thing to do. 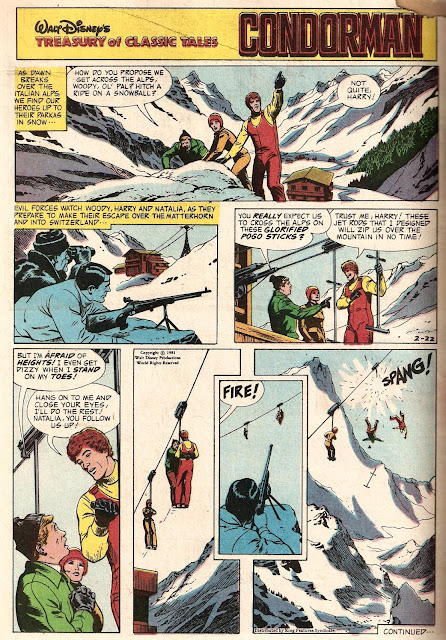 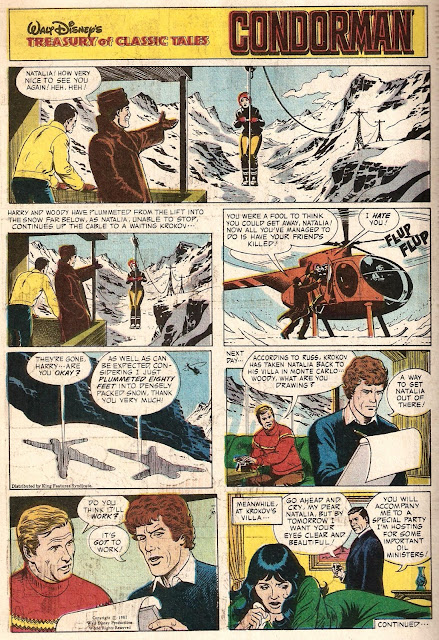 Somehow, despite being dropped from a mile-high snapped cable car with no parachute and making human-sized prints in the snow, Woody & his brother manage to survive the fall with no ill effects. 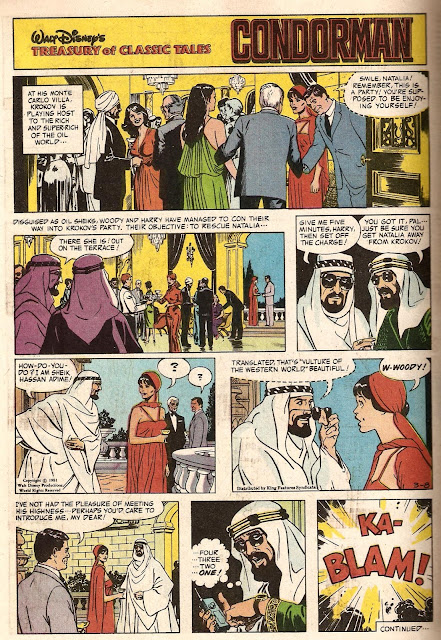 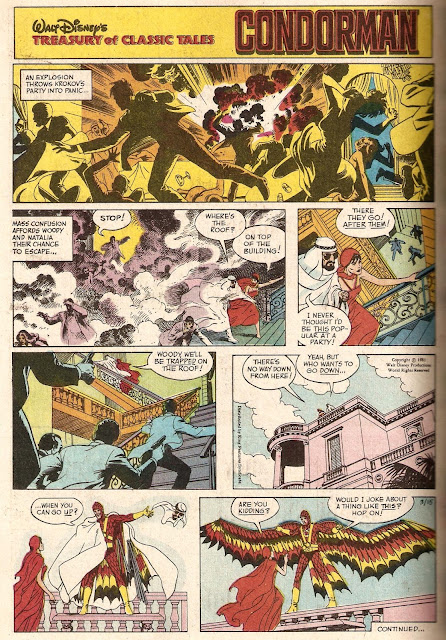 So far, we've seen Woody dress up as a (badly dressed) tourist, a mountaineer, a gypsy, a prisoner, a skier, and now an Arab Sheik.  You know what we haven't seen him in lately?  A brightly-coloured Condorman suit, like he wore at the beginning of all this nonsense. 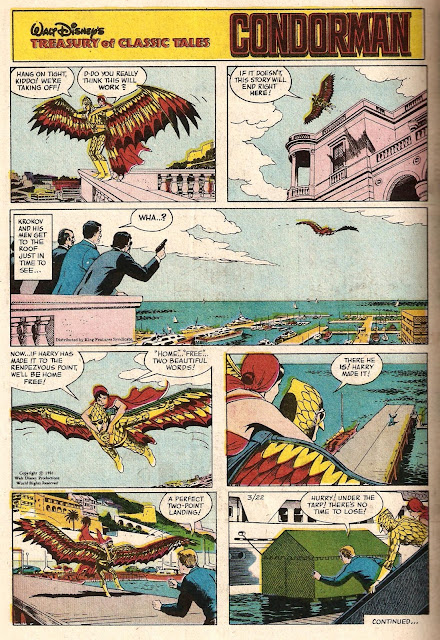 So, having improved upon the flawed designs on the costume and rescued the lovely Russian girl, you'd think the movie would be over by this point.  Nope.  There's still a speedboat chase, because, Russia. 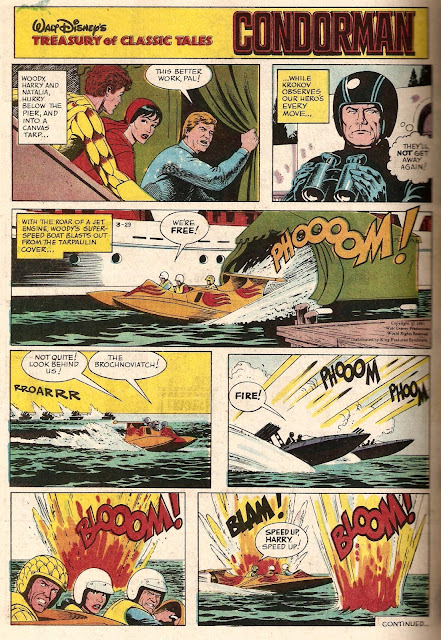 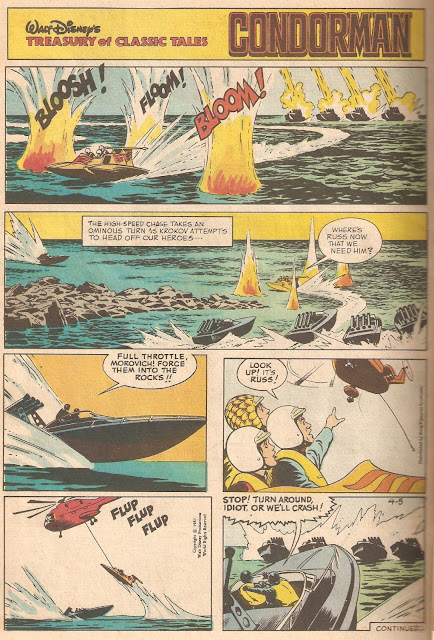 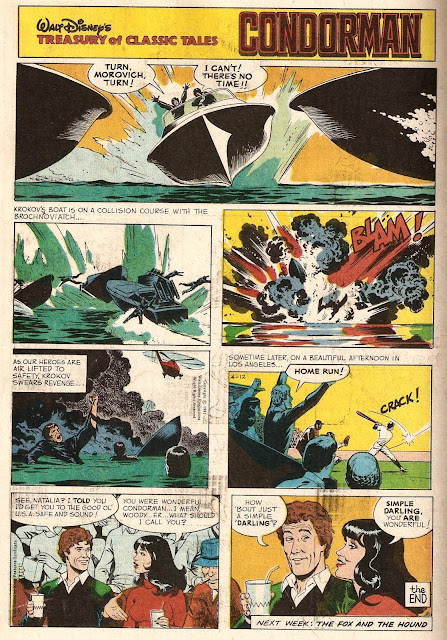 In short, Condorman is very much a goofy affair.  And you need to be in a certain frame of mind to really enjoy it.  You've got a quasi-competent bumbling inventor who only dons a garish gliding costume for publicity purposes of his own book, which he hardly ever uses, and is otherwise useless otherwise under heavily controlled conditions.  While there's the possibility for a bumbling secret agent, the market has changed somewhat from the days of Cody Banks and closer to Spy Kids.
Posted by DeBT at 9:58 PM