Lately, I've been going through my old stuff, transferring whatever files I have that are still readable onto new memory devices before they get infected or die out from data rot, viruses or planned obsolescence.  In the process of digging through, I came across an old story in 2006, back when Harry Potter was exploding in popularity in the form of a Fanfic between two artists, Ryuuen and Akane.   The former using full-body style art, and the latter using Chibi-like art.  (If either artist wants said offending images removed due to embarrassment, let me know) 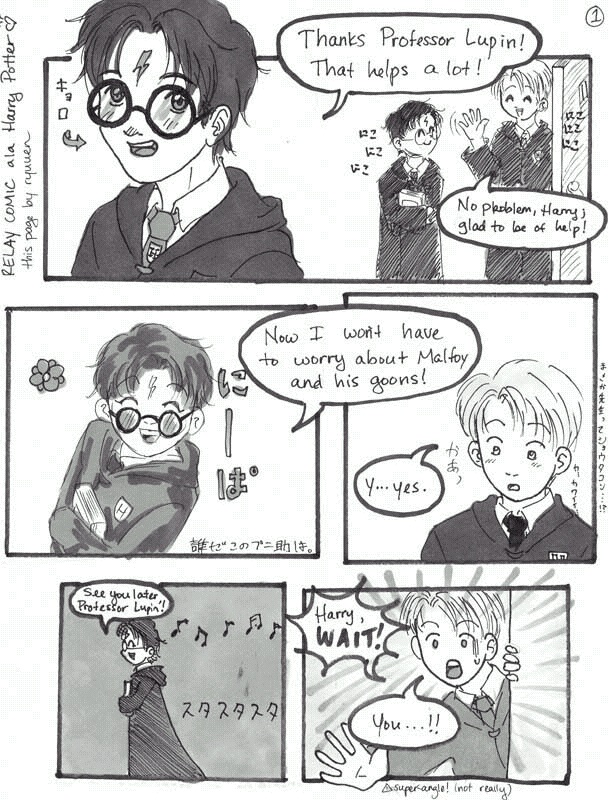 Now, back then, I wasn't entirely privy to the risks and rigours of the Internet, being fearful of potential Trojans, Worms and Spies attached to downloadable material, and the thought of having my saved pics be available for the world to see (on the Family Computer, no less) was something of a major dilemma.  Not to mention I didn't like the idea of having to constantly click to enlarge the image every time.  So, I would copy the image, and then paste it on a Word document, which I could then view at my leisure later. 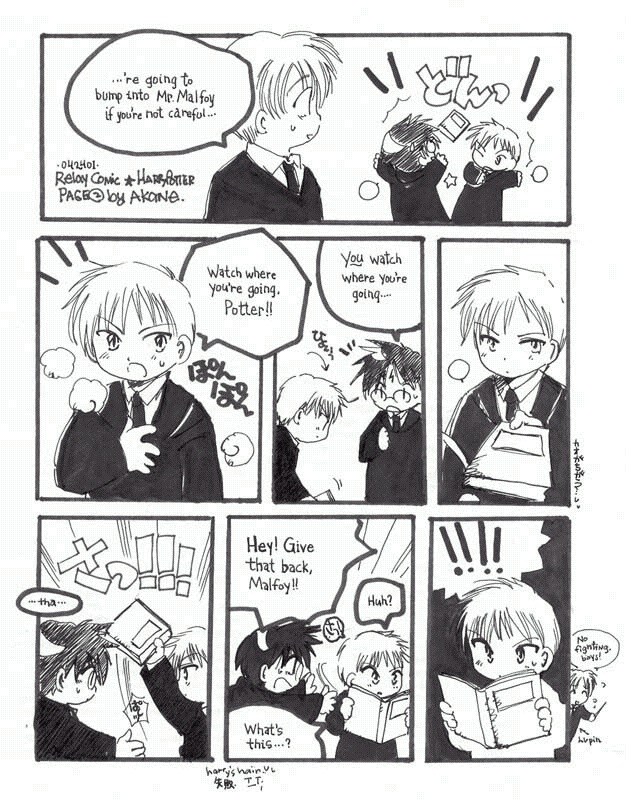 This wasn't always perfect, since it involved having to open said images in Internet Explorer first (Netscape wouldn't allow it for some reason), and there would be an annoying downtime for the picture to load  To counter this, I would scroll past all the pages I'd already done, and then go all the way back up and read from the start.  I had entire volumes of Hikaru no Go and 20th Century Boys done like this before I figured out more efficient ways of viewing these stories.  (The data space for the Word documents holding these volumes were bigger than the individual pages themselves) 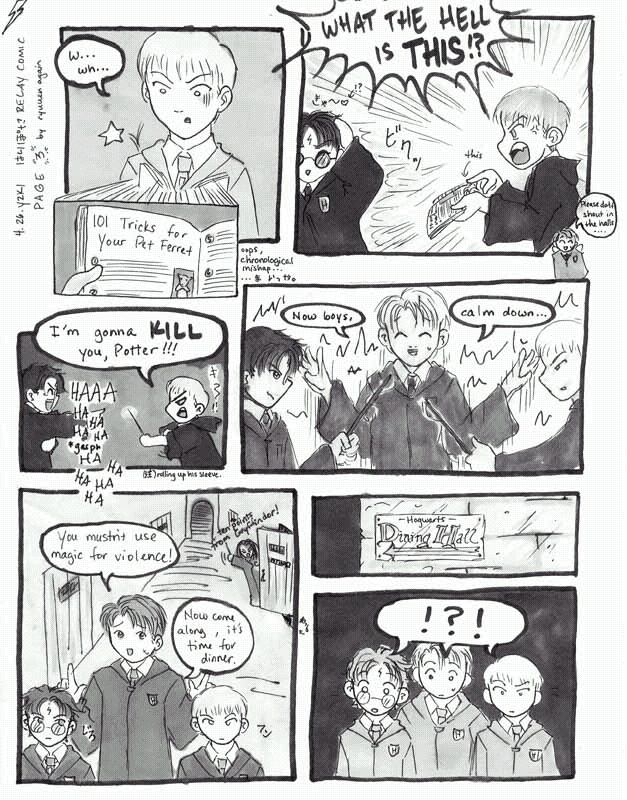 While pasting the images in Word substitute programs was relatively simple, retrieving said images was more of a pain.  I had to highlight said image, then choose the Edit Image option, and THEN paste said image onto a Paint document for easy viewing.  This was the same strategy I employed to retrieve my Sprite WebComics earlier. 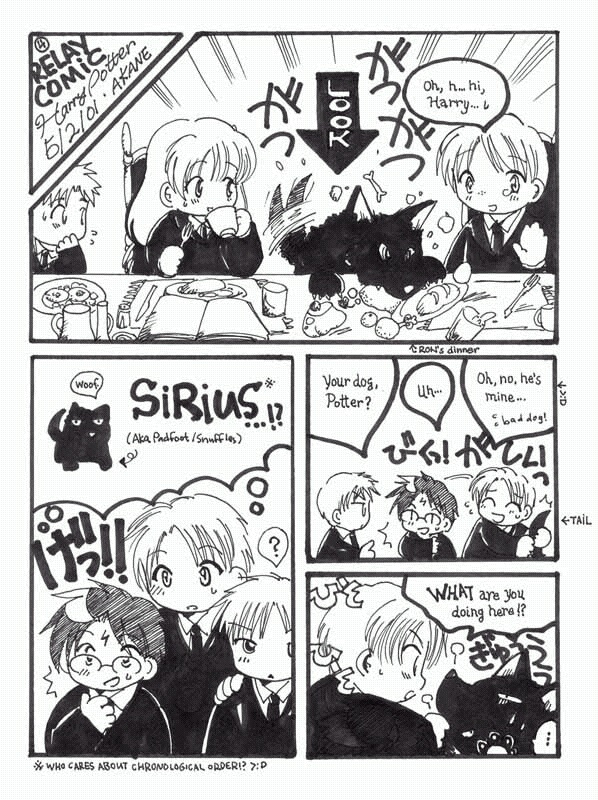 The process to undergo this was labourous and time-consuming, and I didn't begin to seriously consider undertaking a hefty project until the prospect of losing such things became a very real possibility.  That, and my Vista computer is currently disconnected from the Internet.  I couldn't connect even if I wanted to.  (And I want to) 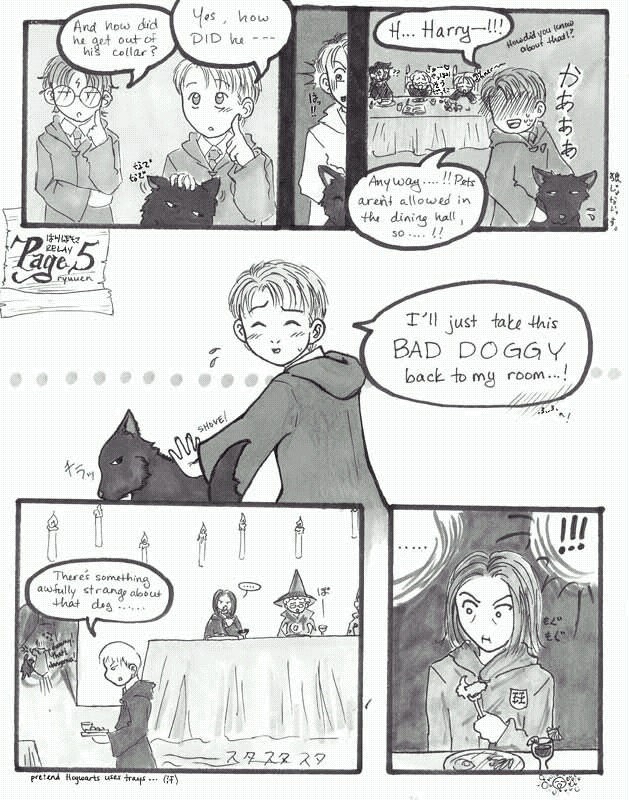 Technically, there IS another HP relay comic out there, but most of it (by the author's admission) is pretty lousy, and she says doesn't exactly improve until the 20th installment.  Considering that there's only 32 parts so far (since 2007!), reading that is an optimal endurance course.  And nowhere near as fun or interesting as the pages I've got here. 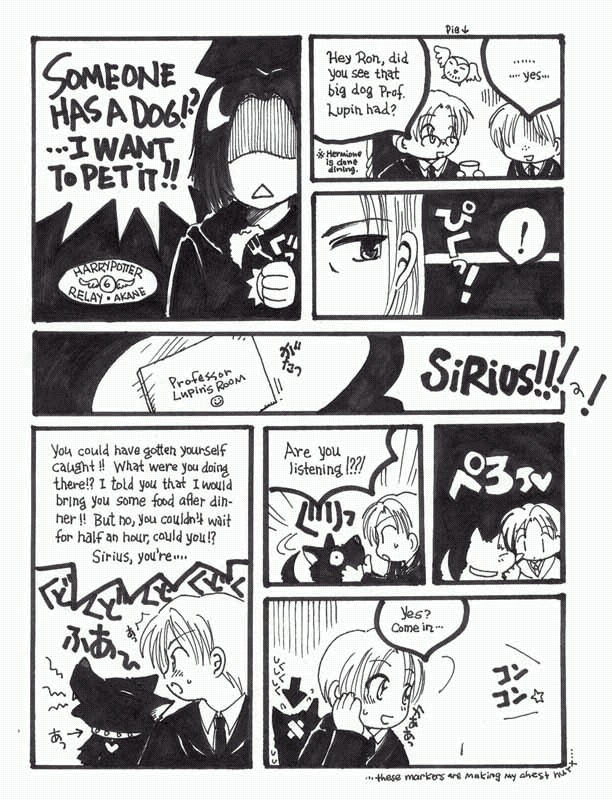 More silliness after the cut: 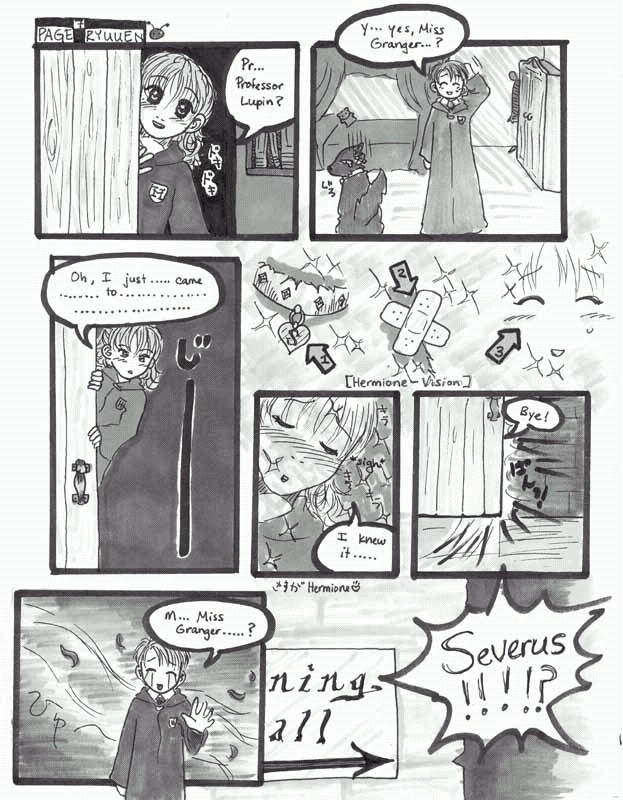 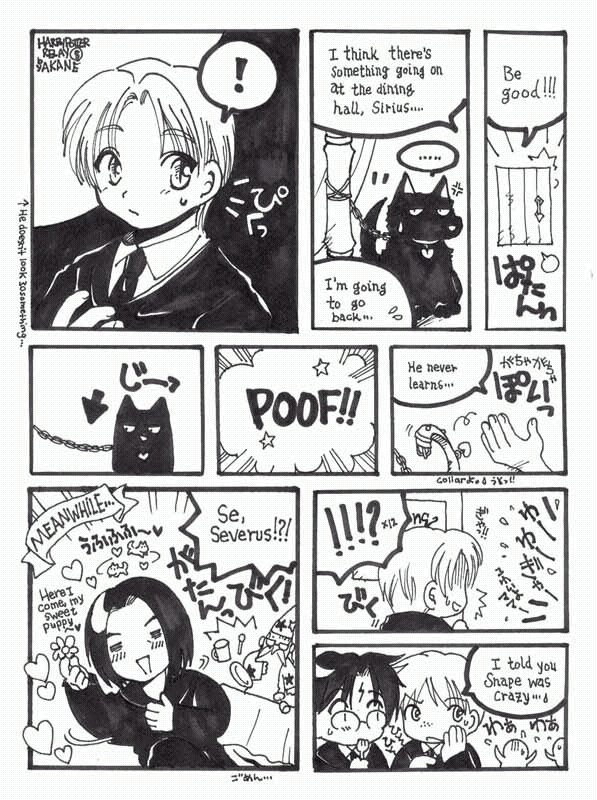 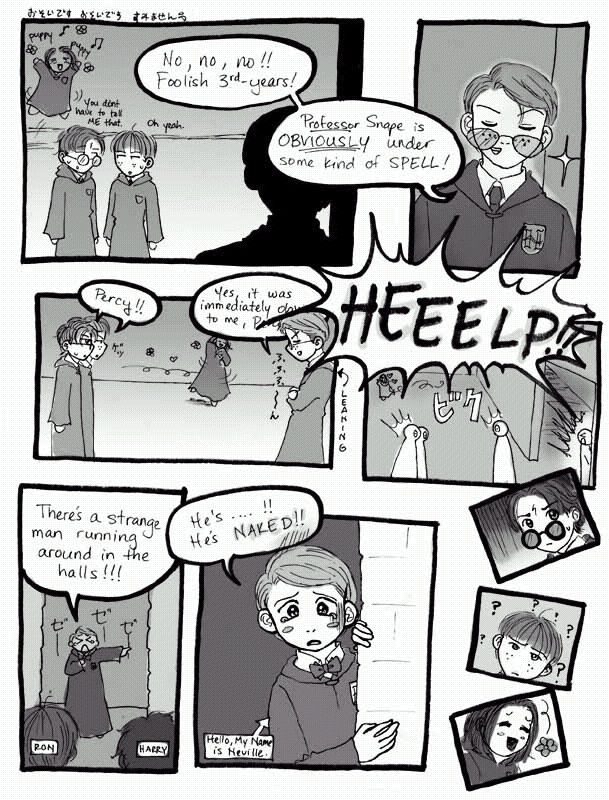 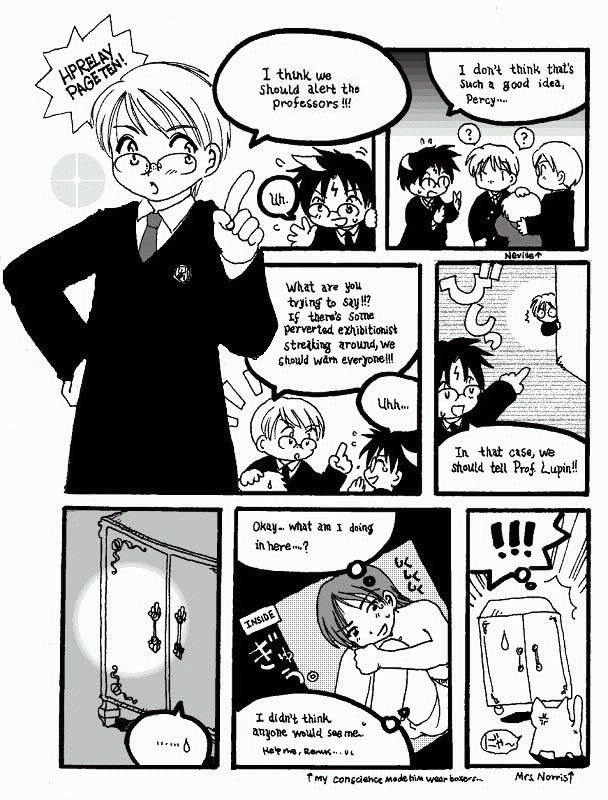 One thing that disappointed me in the Potterverse was the squandered conflict for Mr. Filch, being a Squib - a Magic User who couldn't use Magic.  It could've been potentially interesting to see alternate ways that he'd work around that obstacle, but ultimately, it was all from Harry's POV, and J.K. Rowling wouldn't have had the insight to use a handicapped role.  There's been online speculation that Deaf Wizards would have to devise new ways to cast spells (hand gestures & lipreading), which ironically enough, could make them more sensitive to being accurate in using magic. 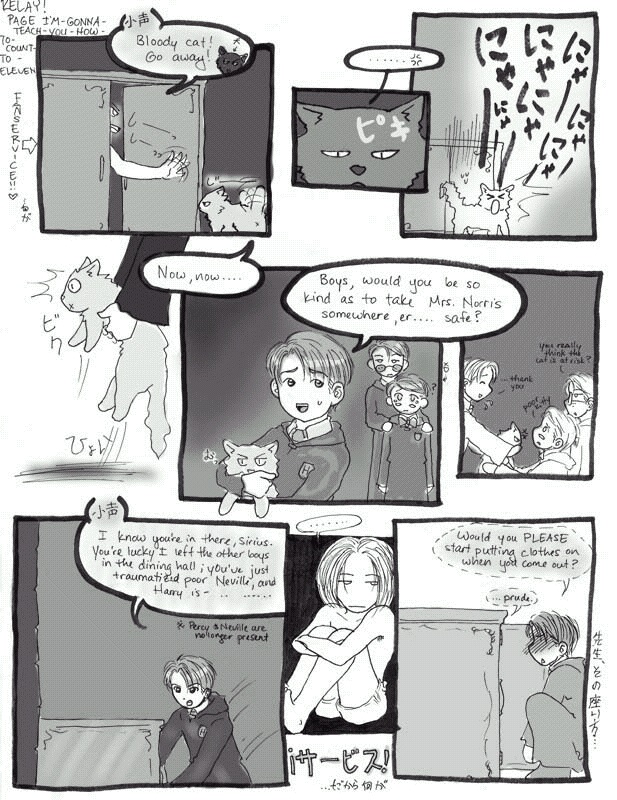 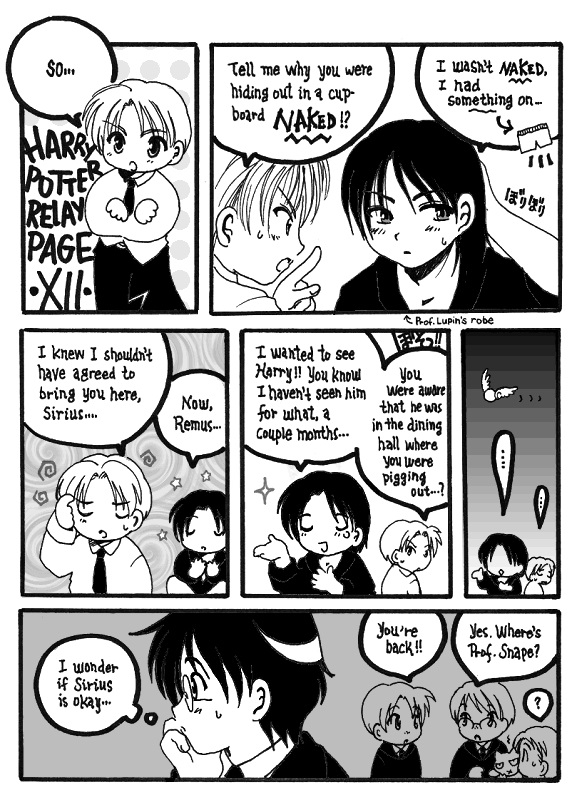 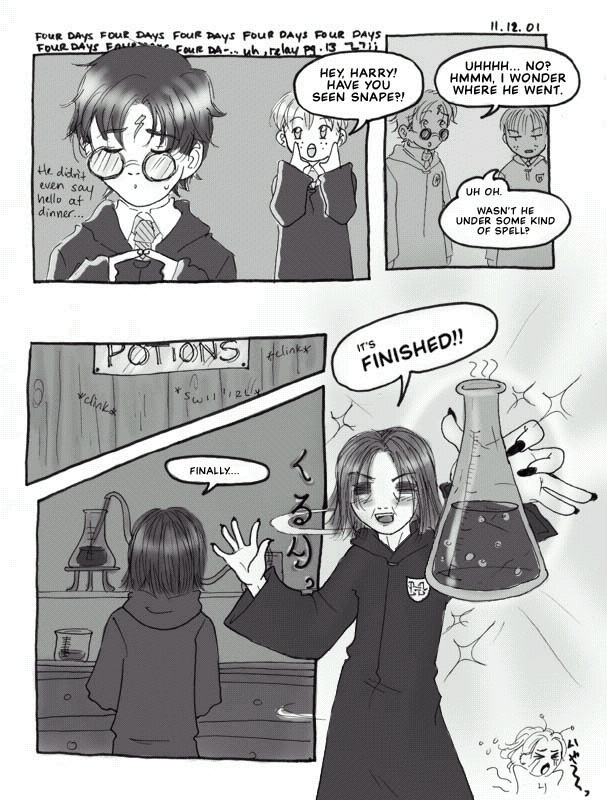 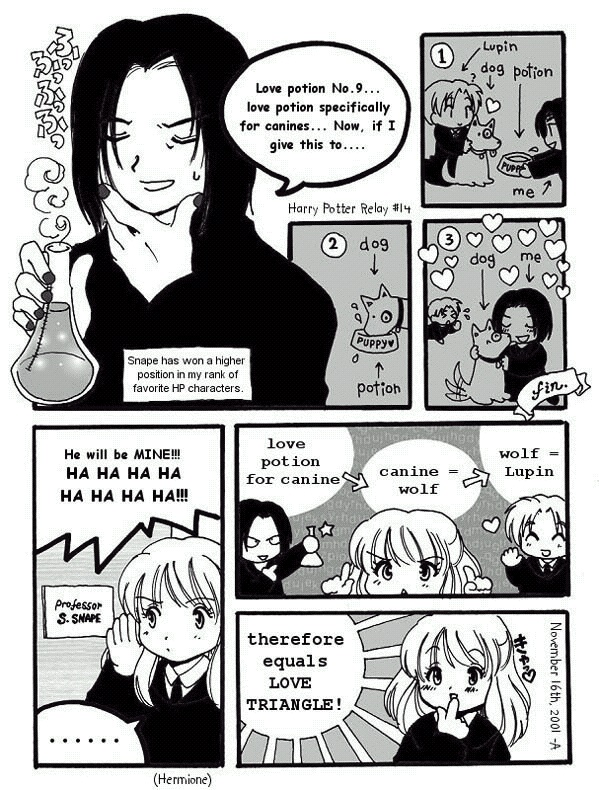 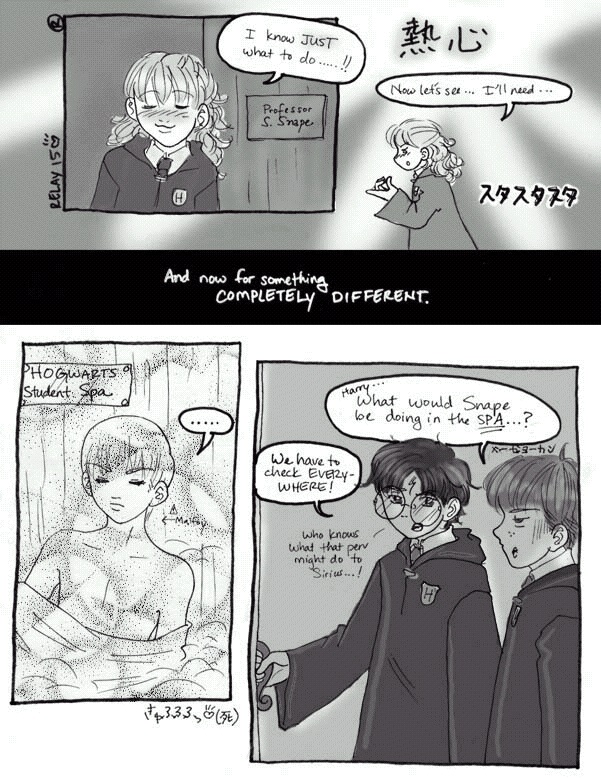 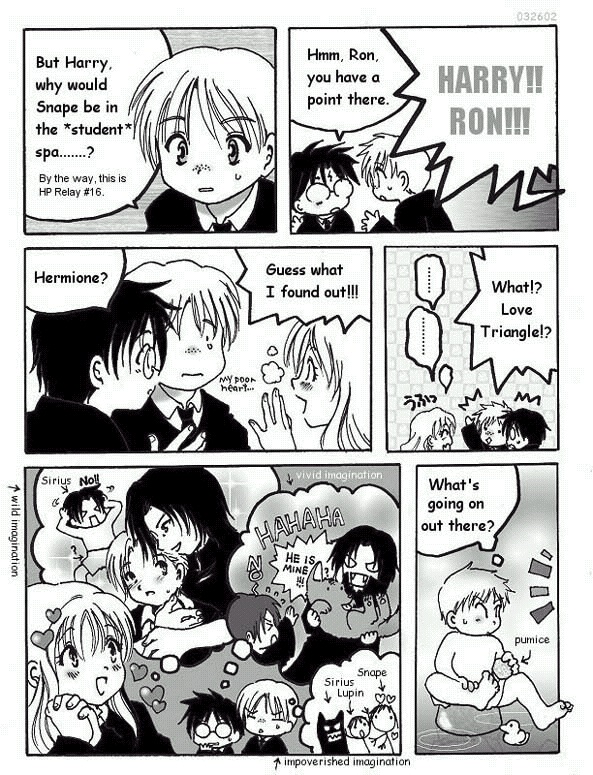 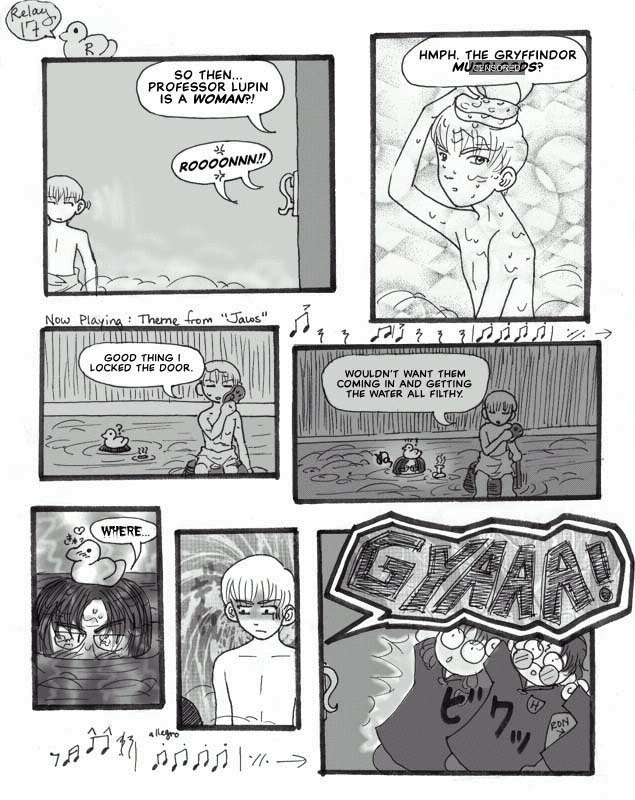 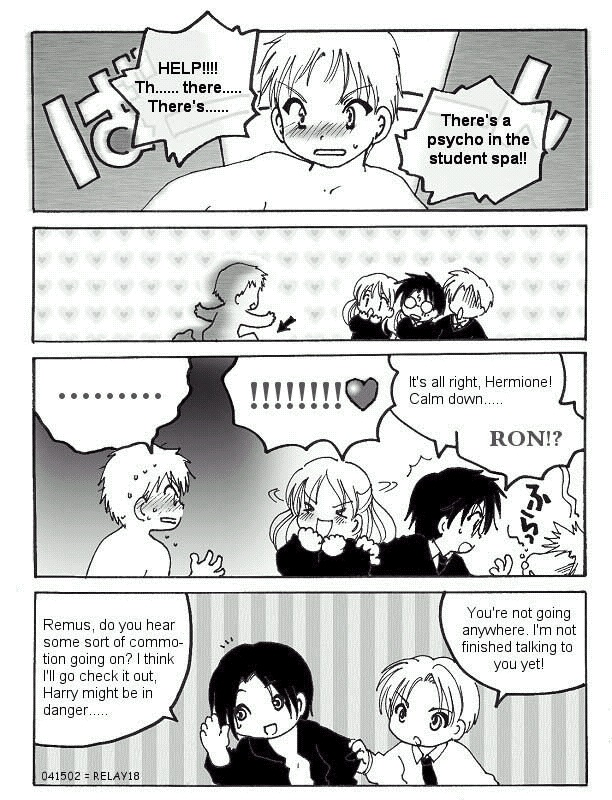 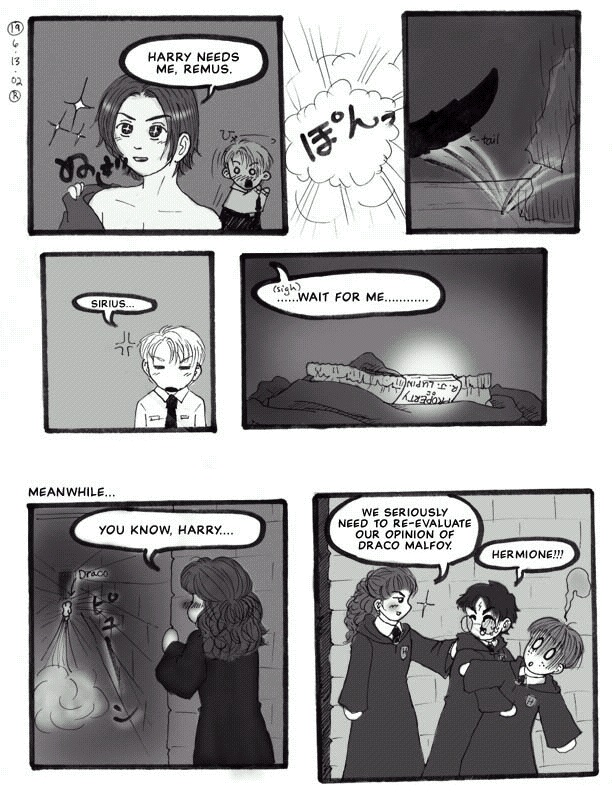 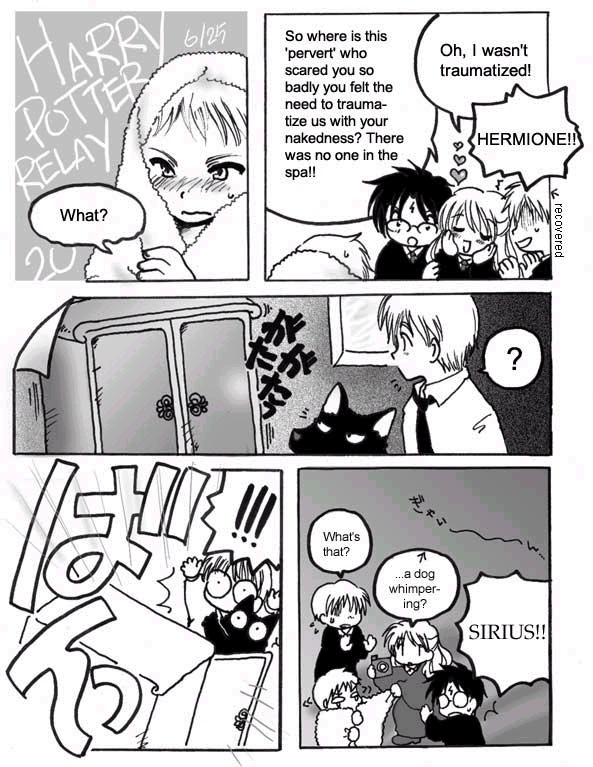 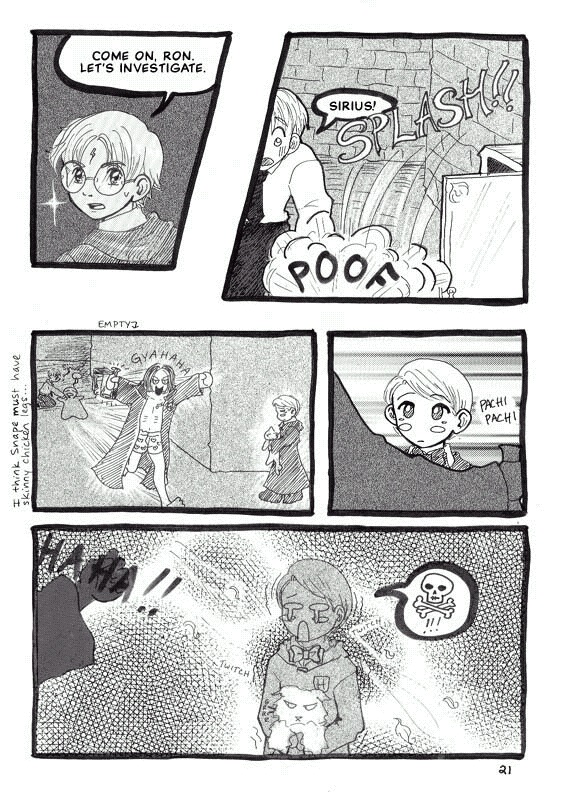 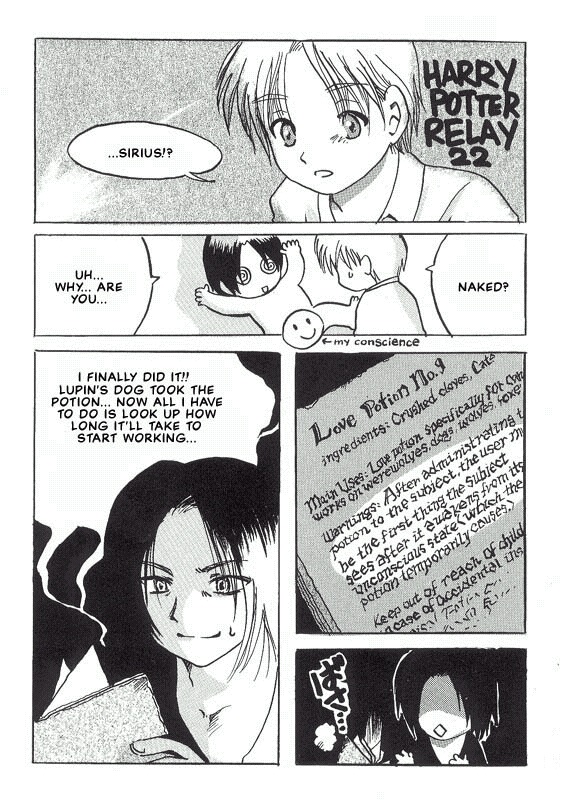 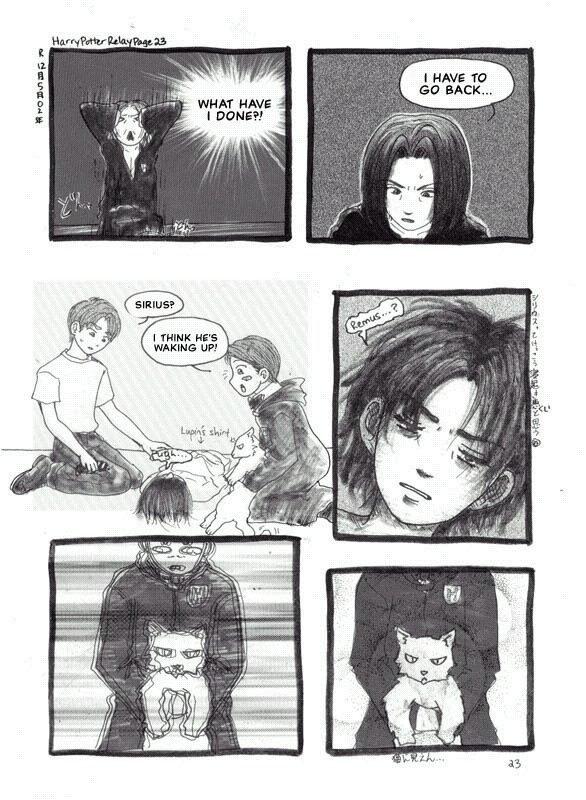 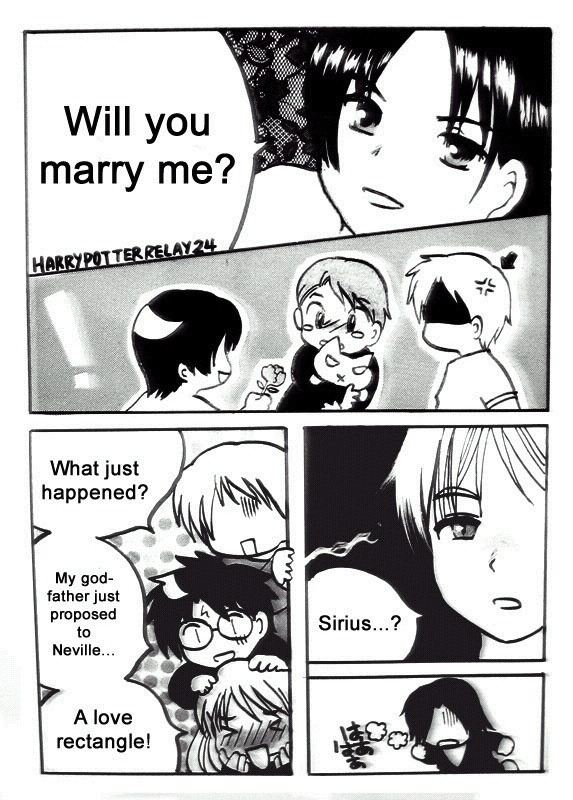 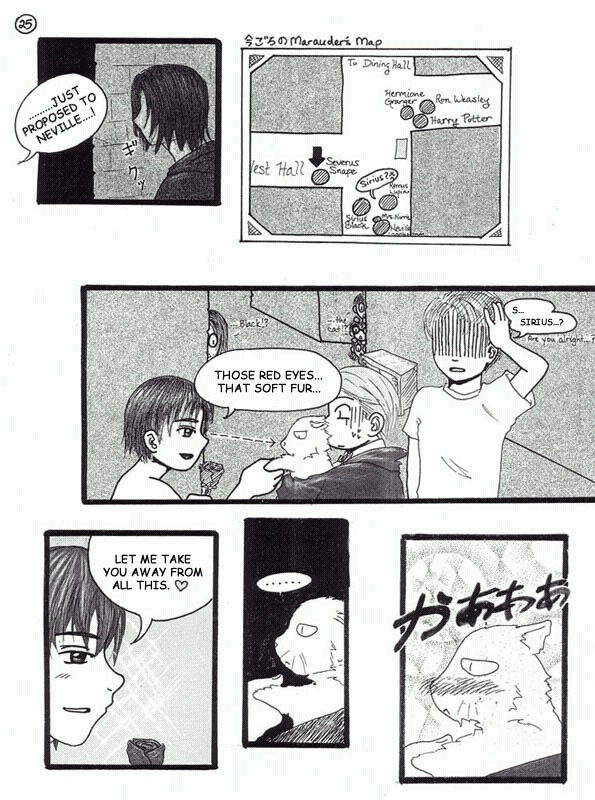 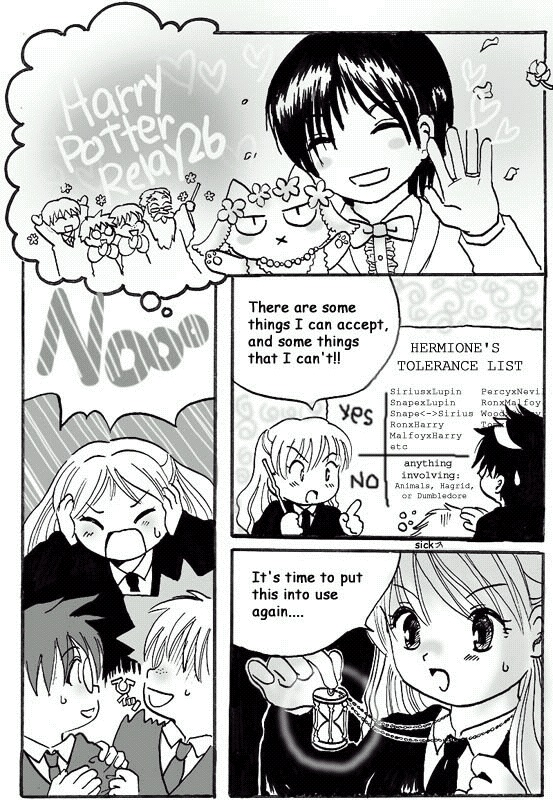 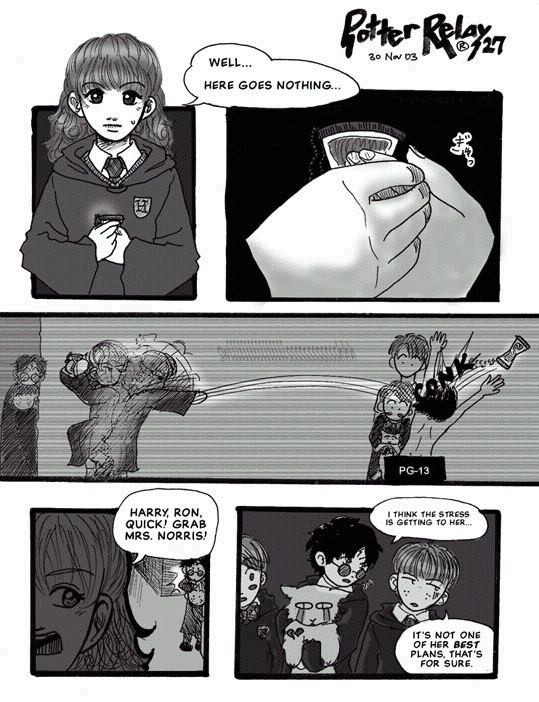 Originally, my run of the Potter Relay comic ended at the 27th page, figuring that I could pick up the later pages in one batch sum, and then the link suddenly went off-line due to inactivity.  It was only when I was doing a search for other HP Relay comics that I stumbled upon the last page - in a folder of Manga-inspired Potter art, fittingly enough - the elusive 28th page, that I finally got a resolution to this entire nonsense.  Though nothing could possibly top that "Love Rectangle" realization. 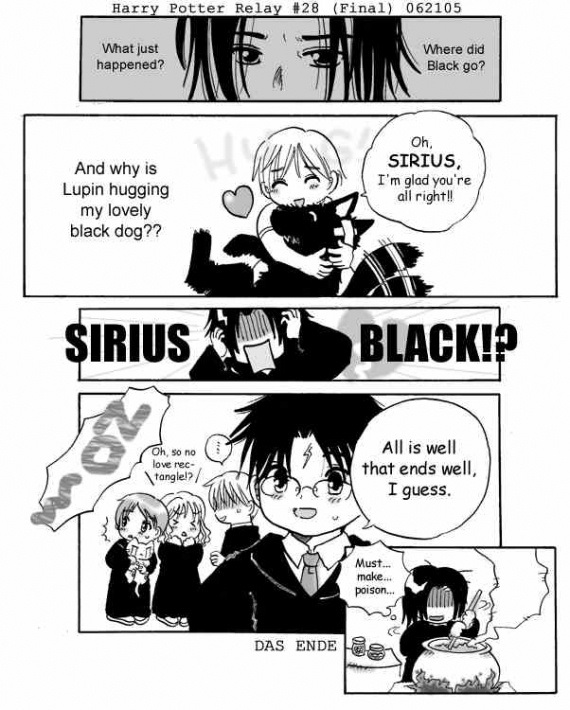