Chew Your Ears Off

When a comic has a long shelf life lasting beyond the first year of their life, some strange traditions may pop up entirely up to the cartoonist's whims.  These can result in lengthy inside jokes appealing to longtime readers who notice such things.  Peanuts had Lucy pulling away the football before Charlie Brown could kick it.  BC had his annual Easter Bonnet, later traded for Visual Religious Metaphors.  And Sally Forth has her tradition with eating Chocolate Easter Bunny.  But not HER Easter Bunny, but preferably, somebody else, most likely her daughter.

The tradition continues with Francesco Marciuliano and Jim Keefe who've carried on the strip after its creator Greg Howard retired in 1999.  The Easter comics they've done since then are available for online viewing, but records of the originator's are hard to come by.  I've been scouring through online archives, trying to find any instances of Sally indulging in her sadistic pastime behavior.  Even with a narrow timeframe of Weekends in April, it wasn't always an exact science.  Some Easter comics would show up at the tail end of March, and there were a lot of holes not of my making.  Starting out, Sally Forth was Syndicated in 1981 in roughly 200 papers, this comic from 1983 is the earliest instance of Sally's Chocoholicsm popping up. 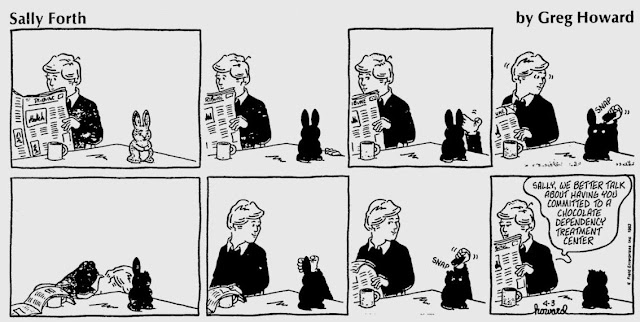 Another thing to consider was that not every Easter was cause celebre for Sally to indulge in her guilty indulgence.  Below is a rare Easter comic that doesn't necessarily have any instance of cruelty to Chocolate Animals and little girls.  There might've been an ear-biter comic sometime earlier, but the lack of available sources prevent me from finding out.  I'm lucky enough to even have this example available in the first place.

After that, there's a big fat hole where 1985 should be, so we skip over to 1986.  The keen observer will note that the Father is using crutches in the last two panels.  Ted's crutches are the result of his breaking his leg while playing Basketball long past his required age, dealing a severe blow to his masochism.  A rare instance of Sunday comics synchronorizing up with the dailies. 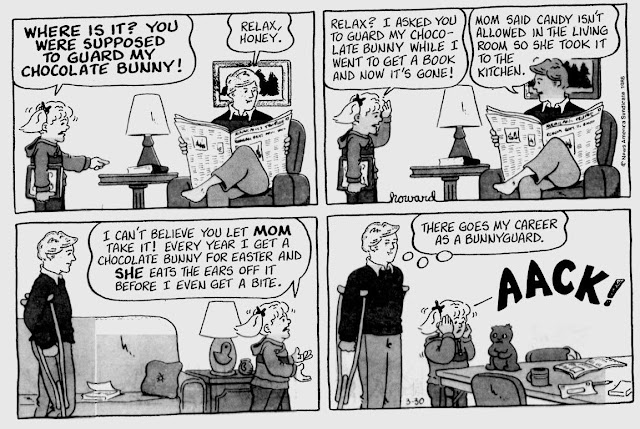 This next entry wasn't found online, but in one of Sally Forth's few collections, A Woman's Work is Never Done.  It was this particular comic that I noticed a certain pattern emerge.  Also, the collection is one of the few that actually leaves their dates available in the margins, otherwise, I'd be agonizing over whether this appeared in 1985 or 1987.  A quick purview at a calendar narrowed down the choices rather quickly.

Over time, Hillary would devise more and more elaborate safeguards against her valued chocolate bunny, which, very much in the vein of Wily E. Coyote's inventions, were constantly squelched through unconventional means. 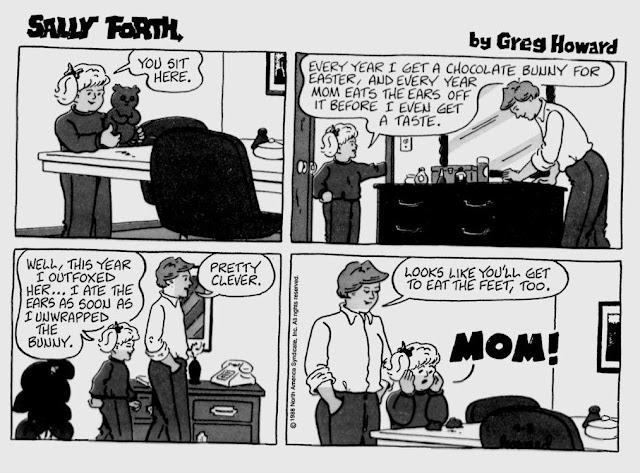 With Sally constantly eating her beloved bunny ears, Hillary started getting more and more desperate in her attempts to ward her mother off.  Whether it was in the process of using decoys...

...hiding them in elaborate places...

...or giving in to the inevitable, she never quite got ahead. 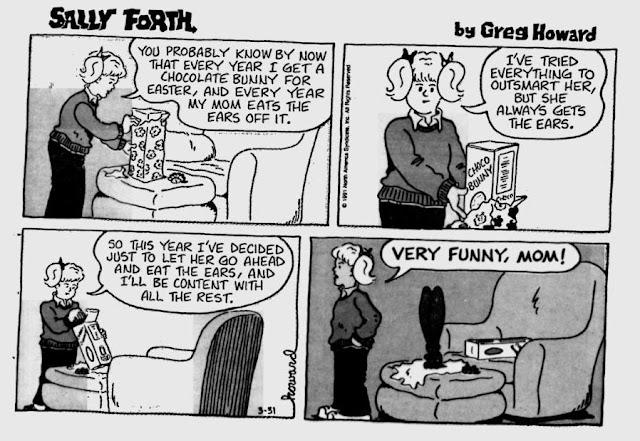 This ordeal wasn't made any easier with having to constantly deal with her Mother's constant casual snark.

After this point, there's an entire gap in the years 1993 to 1996, where no Sally Forth Sundays could be found.  Fortunately, I was able to catch the tail end of the Easter comics before the turn of the Millennium.

As we can see, things haven't changed that much.  Hillary still has her trademark twin ponytails, and Sally still has her mystical ability to find any cocoa-flavored animals within the confines of the house, much to her daughter's consternation.

This comic below is arguably where Greg Howard leaves the comic for good, since the trademark cursive name at the bottom, Mac, is left all on his lonesome and Greg's name is only included in the throwaway panel.  That throwaway panel is exactly why I've included it here, purely for the sake of completeness.  If you want to see what happens next, you're free to click the earlier link up above, or choose it here:

There was an Easter update on April 9th this year, but it was more of a prologue of things to come.  Will Hillary be able to foil her absurdly singular talented Mother this year?  Don't be ridiculous.
Posted by DeBT at 11:22 PM