A recent comic article brought up the question of whether there would ever be any groundbreaking sprite comics along the likes of the trailblazers 8-Bit Theater and Bob & George.

While there haven't been any notable sprite comics since the big two, working on two affectionate parodies (Megaman and Final Fantasy I), there were still a large number of amusing sprite comics out there, most of them (still) being available on Bob and George.  My favorite strips being the following:

Author Wars (A gathering of multiple sprite comic authors, on a madcap chase after an elusive Golden Moogle in the same vein as It's a Mad Mad Mad Mad World, or Rat Race for modern audiences)

Jailhouse Blues (Wily is Jailed yet again, yet manages to build 8 robot masters within the confines of his prison, which Megaman has to fight off after being framed himself)

Warped Reality (A gathering of Robot Masters at Wily's Base turns into a road trip and... things happen.  Like most sprite comics, it's kinda hard to describe)

Back then, Sprite Comics were subject to heavy derision for blatantly stealing licensed artwork and making what should've been a labourous process, the act of cartooning easy for those who couldn't draw.  All that was needed for an aspiring writer who could simply add text to the sprite without having to show any artistic merit.  Though some like Taco: the Comic and Megaverse would occasionally have handdrawn art in their comics, in a veiled tribute for Bob and George's intention to start out as a drawn comic, though their artistic skills were of higher quality than David's.

Another worthy webcomic that managed to have separate sprite comics and hand-drawn comics would be The Rogue's Gallery, which had various comics, ranging from Author Space and The Fallout Shelter, most of them focusing on the abuse of Cream the Rabbit.  (Stick with the drawn stuff, such as
All Plots Aside - they're better)

On one hand, this was a more visual form of Fanfiction, which would update regularly to keep their audience engaged, and garner interest.  Furthermore, the appeal of a consistent webcomic was seeing what zany oneupmanship the author would come up with next.  And much like many fanfictions, a lot of early Sprite Comics were terrible.  Some blatantly ripping off what made Bob & George successful without bothering to explore other realms.  Others being a kaleidoscopic mess along the likes of Dogaland Adventures, throwing whatever handy sprites were lying around and fooling with Photoshop all the time.

Finding a well-written well-created sprite comic was pretty much digging into a pile of crap to find that elusive flawed jewel hidden somewhere in the muck.  Also, there were instances of overwriting, filling in more text than would be considered helpful, Captain SNES being the worst offender.  (Almost 1000 strips later, and we're no closer to finding out how the Captain got himself jailed, let alone who he's been narrating the events of his adventures and multiple tangents to)  The only instances where a Sprite Comic would have space to breath would be for dramatic or humouristic effect, and these instances would be far between.  Rereading these often disjointed plot elements striving to come to a thematic conclusion without covering all the plot holes is now something of a chore.  The split screen arc of Bob's invasion in the Month of Destruction was revolutionary for its time, giving two separate storylines simultaneously, but rereading it now gives me a headache.

For the most part, working on a sprite comic was basically having fun with the format, usually taking heavily influenced elements, such as making the main character an idiot, references to ingesting large amounts of sweets or alcohol, and author inserts whenever possible.  People were flexing their creative muscles without really thinking or planning how things would turn out, striving close to the game they were parodying, which was as little more than exercising the form as best as they could comprehend.  In most cases, the few who managed to finish their first major arc wound up carrying that momentum onto their second... which would be where their creative process inevitably stalled.

Playing and enjoying the storylines in Video Games was something significantly different from creating comics based on those games that would veer off in alternate directions.  Once they went down a certain path of a story they didn't create, they found it difficult to add to the process, most of it having been written by someone else.  As the old saying goes, if you want to tell the different between a storyteller and a plagiarist, simply have both of them continue the story.  The one who put the most thought into the story would come up with all kinds of elements that were left out that wouldn't even be considered by others in the first place.

Somewhere along the way, the author simply either ran out of steam or found the process more labour-inducing than fun, and eventually stopped.  Whether from intervention of having to focus on their school lessons or getting scholarly degrees or getting paying jobs, for one reason or another, real life infringing on their creative process was a major contribution.

As a result of inactivity, many sprite comics have been lost to the ages of time.  One particularly impressive Flash animation I remember was a duel between Nate and Mynd, which would have two complete different outcomes depending on which one you chose to fight and win.

Even so, going through sprite comics shouldn't be a deterrent, considering how funny they can be.  The lack of an ending for many of these comics is a sore point, since who would want to read a story without knowing how it all turns out?  A happy exception to this would be Megaman: The Lost Chronicles, which I always think of as SnakeMan's comics, who despite being shown as an author avatar, manages to keep mostly off the sidelines.
While there are plenty of webcomics mentioned thereabouts, I'd like to mention some of my favorites that aren't covered on TVtropes.

One of the earliest sprite comics was Odd Quest, which started off with a Final Boss fight against the one creature that's constantly Link's bane:

This was simply supposed to be a prelude, narrated by the hero, now an old man, relating his destiny to his grandchildren who would be the new RPG heroes of the next generation. 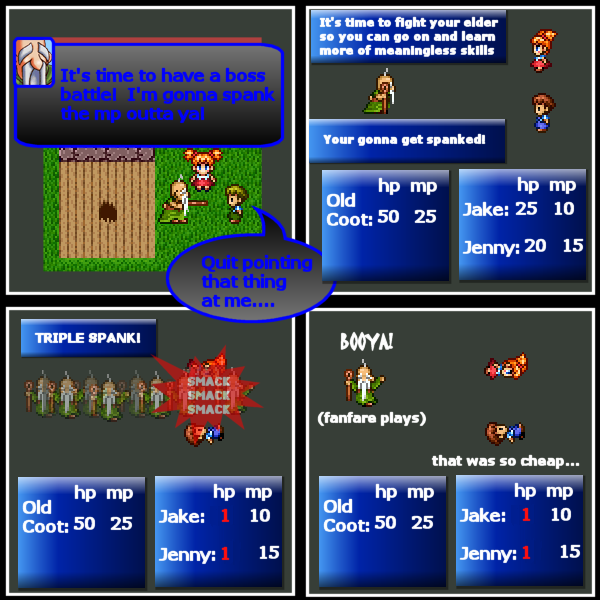 Later, like any writer ashamed of their silly first drafts, the author tried to redo the strip from the start, so it would be more serious later down the line, having the Chicken become more of a reoccurring villain, but how could you possibly improve upon that opening? 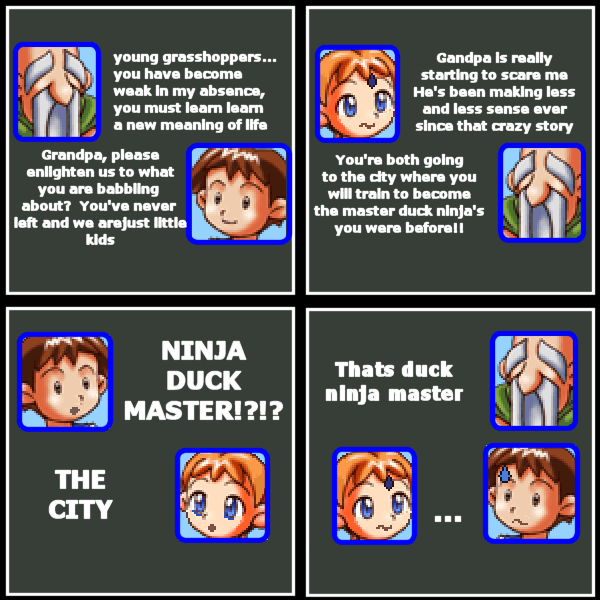 After a beginning like that, anything extra would just spoiling the taste.  What could you possibly add to that??? 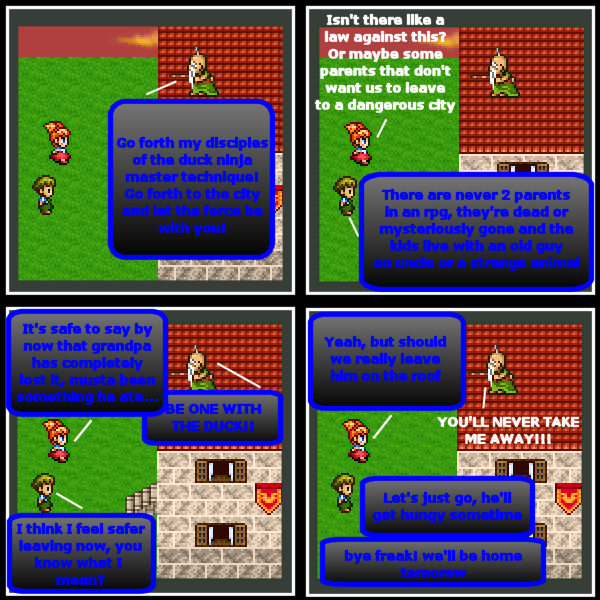 While many sprite comics went the way of the dodo, their domain addresses expiring from lack of use, there are still several worthy ones among us.

Neko's House is one of the more uniquely designed webcomics out there, about a ruggedly handsome man surrounded by a harem of bountiful cat-girls.  (I didn't say it was original)  The more attractive element is the ongoing relationship between Meowth and Tailmon (Better known as Gatomon, for reasons specifically spelled out below)   The only negative factor in the website is that there's no easy way to navigate through the multiple comics, each popping up into a new tab window, and some are vertical and some are horizontal, which plays havoc with your screen preferences.  Despite these niggling faults, the writing is sharp and spot on, and the character designs are attractive.

Then there's Xardion Comics, which has a small collection of What-ifs, and two storylines (one sadly incomplete), but its most remarkable feature is Chibifying Robot Masters into Mets.

The closest any sprite comic went to creating an epic recreation of an RPG would be Secret of Mana Theater, which has numerous flash animations (and multiple Easter Eggs) of the beginning of the SNES Mana game, which output slowed down to a crawl when **SPOILER ALERT** it diverged greatly from the main plot, and had the main character killed. 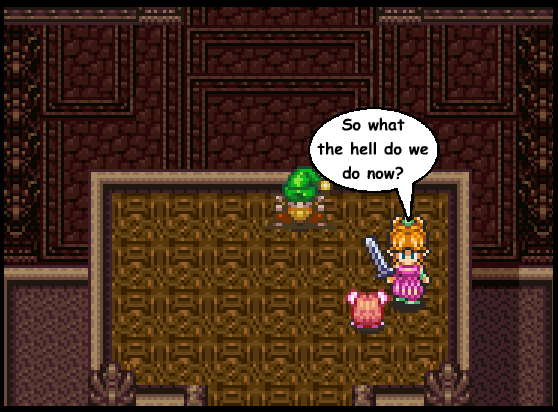 These were seasoned veterans joining up with Cecil and Co. when they were just getting started.
Since FF4 has a reputation for being one of the hardest of the Final Fantasy series (so hard that they released an easy version, so as not to scare curious players off, unlike some other old-school RPGs out there), so Chrono and Company being there creates all kinds of unintended consequences, such as Tellah dying early and Magus taking over the role of the antagonist from Golbez.

Another notable comic would be Oldskooled, which took place in a bar where 8-bit stars hanged out, not unlike a certain sitcom show that I never saw.  As such, with so many stars around, there's bound to be a certain odd man out who'd be derided for their game because of its unforgiving difficulty and anticlimax boss which, until the 3DS remake, was hardly something of a classic.

Two comics I managed to save that are no longer available but are here for anyone interested can download them by clicking the titles, though chances are there may be a few comics missing, since I only saved the ones I thought were the best and most relevant.

Wily's Lab, was about Dr. Wily abusing one of his employees once too often, and he broke off and formed his own evil association, which wound up being more successful than Wily's.  In drowning his sorrows in defeat, Wily in a drunken binge, somehow managed to craft himself a Megaman Power suit so he could rightfully take back his Taking over the World schtick. 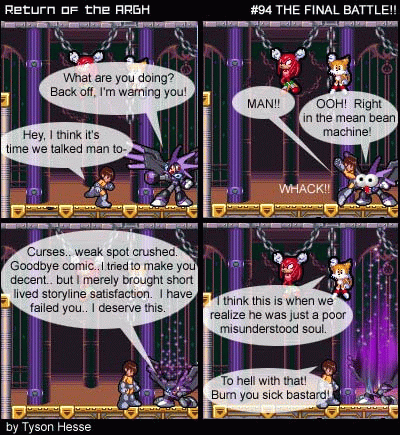 Another honourable mention I'd like to include is Zero Hour, which like many sprite comics, is no longer available, but this blog entry's getting long enough already.

Perhaps like all once-popular things, this is something that needs to hide away in obscurity until the format reuses itself again.  Until such a hypothetical time comes, here's a handy tutorial for creating sprite comics that still seems relevant today. 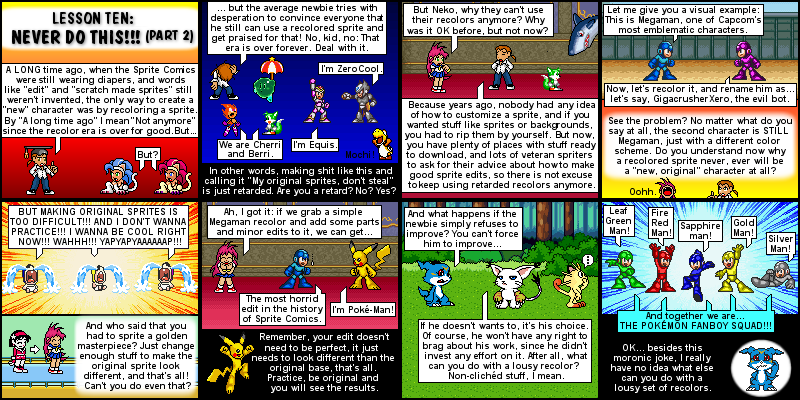