There's something that I regularly do after posting my entries that I'm not entirely proud of. Shortly after I post my latest blog updates, I'll suddenly think of something I left out, or another relevant comic, and I'll scramble to write up, or find said image to put into my post, and hope not too much time has passed for anyone to notice. I have entire concepts mapped out in my head with the intent of capturing them down creatively, but when I get around to it, I find that I've lost most of the arguments and analyzations that seemed so clear at the time. Very often, my creative juices are inspired by which images I choose to upload, and they're hampered just as easily, because I figure the comic in question is all the explaination I need. Other times, I'll find comics that I completely missed or forgot about that I didn't get the time to scan properly, and I have those taking up space in my folder just waiting for a revival. I could go back and update those links, but chances are they won't be noticed, and the only chance they have for wider distribution is if I make them the main focus in my latest entries.

Here's an appropriate finale for the Shoe sports scores:

Here's another image that could've been perfect for my Barber / Dentist preferences. 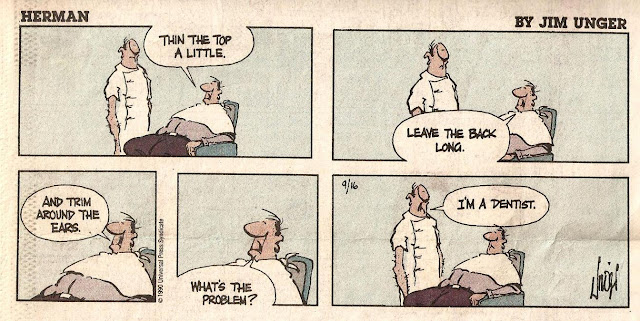 There was another thin-related comic that I'm sorry I didn't get the chance to post when I had the opportunity.

I found a few more tax related comics, but those can wait until next year, assuming the world will survive the Mayan prophecy of 2012. (Logically speaking, I know I shouldn't be so superstitious, having lived through Y2K, which I still affectionately call the Yuk-2 bug, but I never let a good worry go to waste)

So far, the one I most wanted to add to was my critique on restaurant menus. I intended to show a review of Vichy's, but couldn't find it online, presumably because it originated in 1995, and anything before then wasn't considered worth archiving. 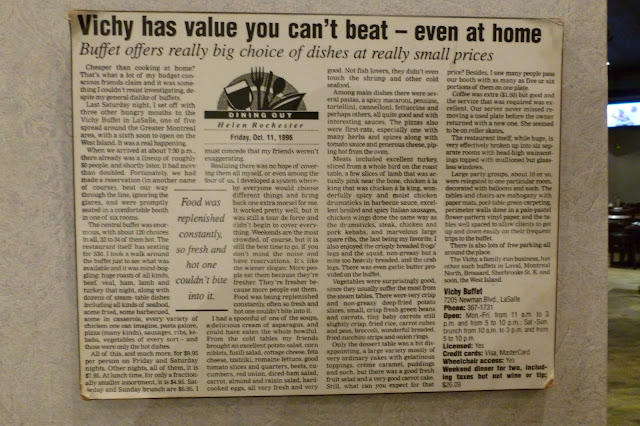 I recently went back to that buffet restaurant to celebrate a momentous event, but it was hampered because I wound up eating too much again, and had to walk around quite a bit in order to burp up some air and free some room for desert. However, even that little exercise wasn't enough to completely empty the contents of my stomach, and I wound up barfing up some portions of the tasty chocolate mousse I'd devoured, making my little ritual quite pointless. When you're regurgitating the stuff you've already swallowed in order to make room, that's more of a sign to stop eating, unlike the residents of the Capitol in The Hunger Games.

My Zaidie would always say that he was full after eating supper, but at the mere mention of desert, would have a sudden change of mind and announce that he could afford to "fit a little more room there". Even though I always had a lot of trouble understanding his Hungarian accent, I'm surprised at how much I'm told that at times I say things that sound remarkably like they came from his mouth. Like my grandfather, whenever anybody mentions something memorable around the dinner table, I'll remark "That reminds me..." and I'll either regale a funny comic or newspaper article I read years ago, and it'll EXACTLY fit what we're talking about. Likewise, my Zaidie would recall anecdotes or stories that he heard years ago, and the theme would be a perfect representation of the current subject.

Another problem I have with my posts is that they have a tendency to end abruptly once I've finished my main topic. I feel like I should give a more satisfying conclusion to my observations, but the overall effect is somewhat lacking. Likewise, there are some sentences that sound perfectly elaborate, but I have nowhere to put them, because they'd ruin the flow of the paragraph structure. Can you guess where this line was originally supposed to go? "The problem is, the food is so tasty that I want to experience the taste more than anything else, but I can't take any of the buffet stuff home with me, since they don't have a doggie-bag policy, and I hate to waste perfectly good food on my plate." Now, with some creative writing, I probably could fit it in, but I'm constantly distracted with my blog saving every minute or so, which plays havoc with my concentration.
Posted by DeBT at 4:43 PM