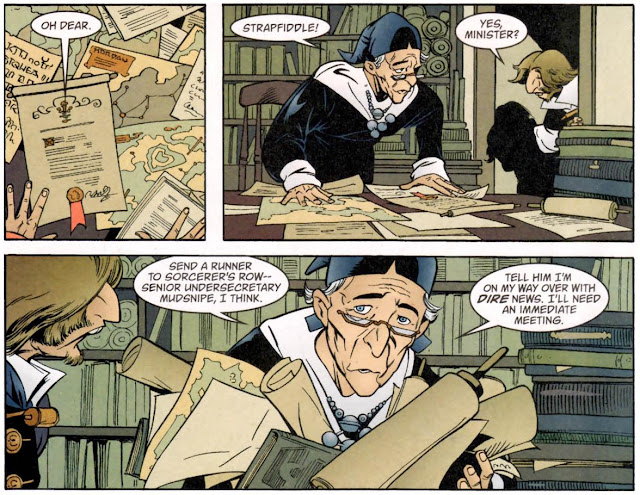 With the release of the 100th issue of Fables, I decided it was time to reread the first 75 issues again to refresh my memory of some slight subplots that might've been forgotten or overlooked the first time around. Especially since my predictions for how that issue would turn out was far off the mark. For those of you still unaquainted with the latest Vertigo title, I'll give you the low-down. It's about a group of the most popular characters of fairy tales from your childhood; Snow White, Sleeping Beauty, Cinderella, the Big Bad Wolf, Little Boy Blue, the Frog Prince, etc. who're living in the "Real" world in order to escape from an all-conquoring nation taking over their lands who's only known as the Adversary. It starts off slow, but doesn't really begin to pick up steam until the 6th book. 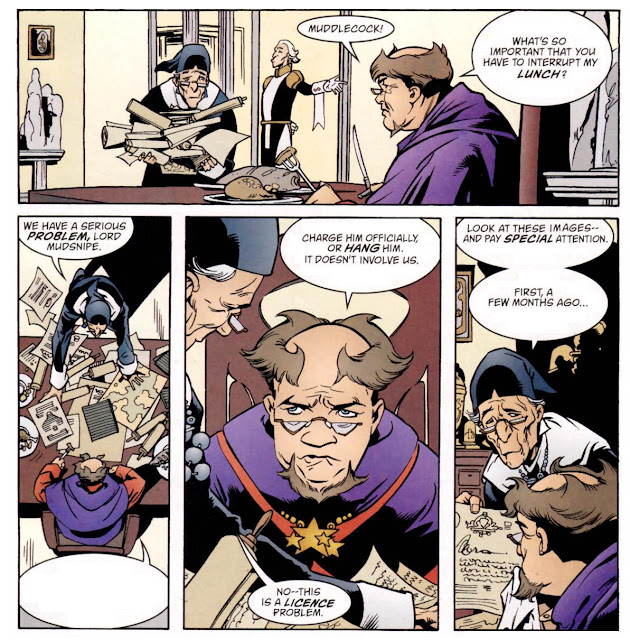 However, while rereading that 6th book, I began to notice several panels seemed familiar. It started with the 36th cover issue. A seemingly innoculous patriotic recruitment cover from the Adversary. Pay attention to that center red goblin, because you're going to see him often. 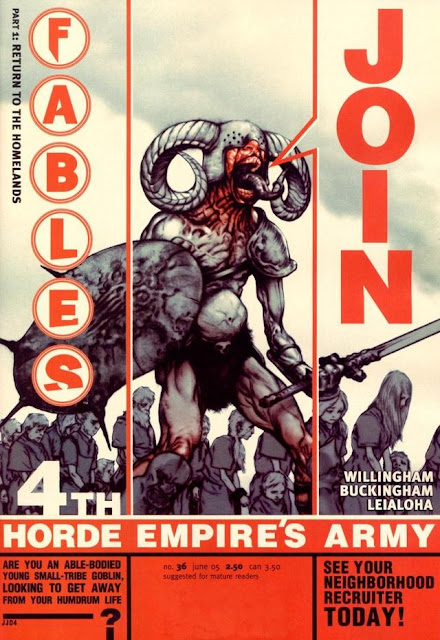 This sort of thing could be considered a form of subliminal advertising. I know that every time I saw this Goblin's mug again, I could practically hear him bellowing out a "JOIN" whenever he appeared. 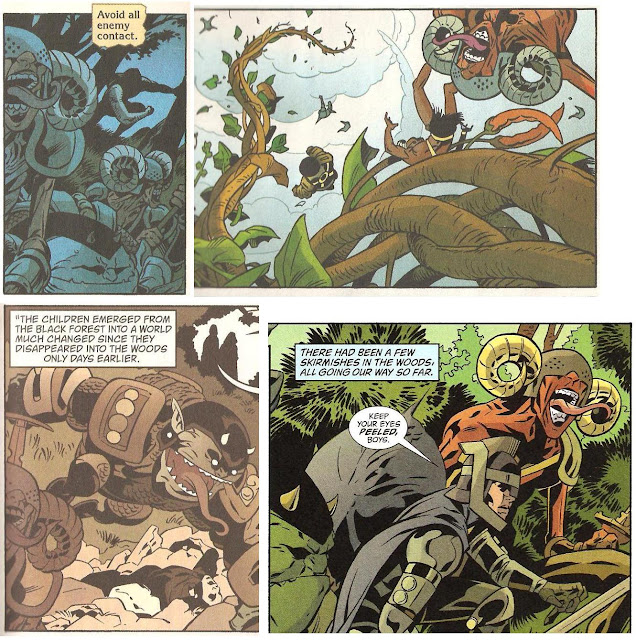 In addition to that particular Goblin who'd been reused several times throughout the series, I also noticed several poses that seemed unusually unorthodox. Look at how Bigby Wolf's posed in the first panel there - that's a very unusual stance to take, and it got my attention, since it "sounded" familiar, but I couldn't quite place it until I went through the other books to find anything that looked similar. So, not only is Bigby's bending position suitable for carrying a sword, it's also useful for carrying farming buckets, planting dynamite and shoveling snow. 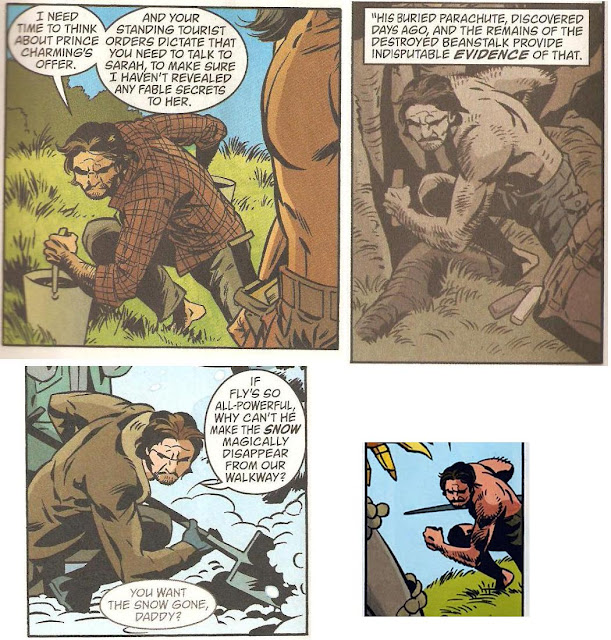 This leads me to suggest that the original pose was a lunging one, and was only reused for this instance multiple times. With a stock position, the artist can reuse these styles over and over again without anyone being the wiser. There's only a finite number of ways the human body can contort itself, and artists can tire themselves out if they have to think up new ways to portray their works.

From there, it was a simpler matter to find reused faces, even if they were flipped or not. Frau Totenkinder, the Black Forest Witch of Gingerbread House fame is equally notorious for having limited facial expressions. 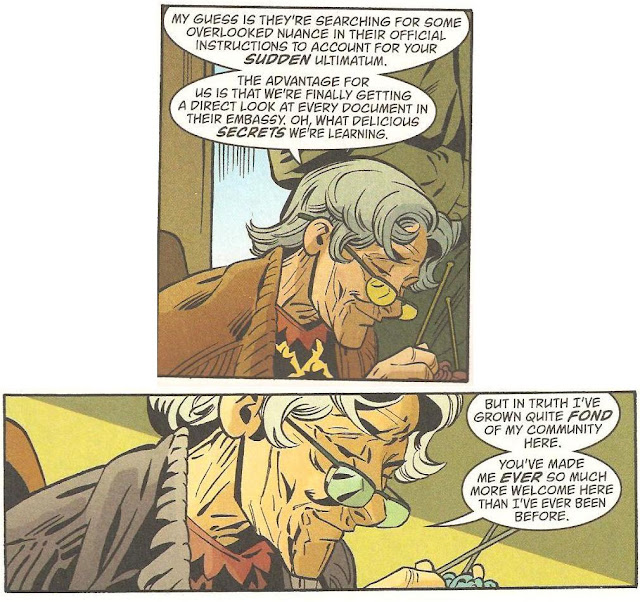 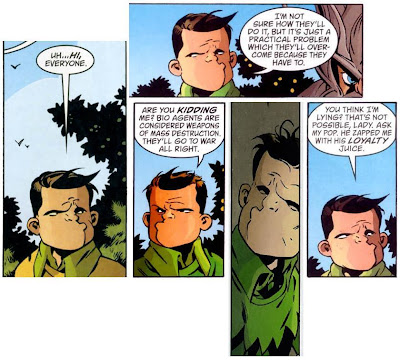 The only things that change are his eyes and hair, but his face remains the same. Much like the Goblin whose tongue was of varying lengths with every appearance.

Another single-issue example is where Beauty is standing with a sour expression next to Beast who's jutting his shoulder out. 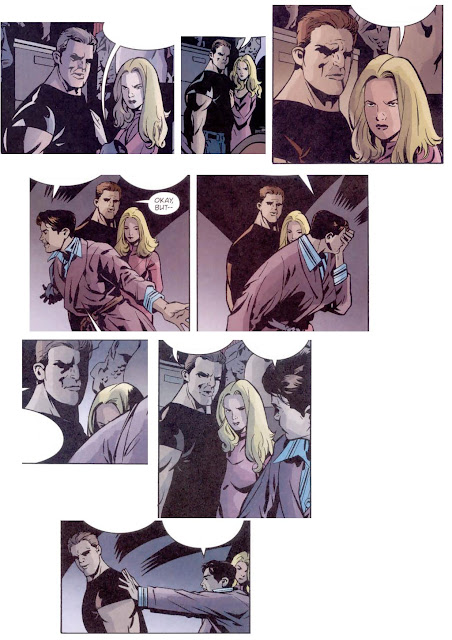 While there are occasional panels of Beauty & Beast moving around, they eventually revert back to their stock position while Prince Charming is the only one moving around the place. Eventually, Prince Charming gets tired of the two of them standing still and opts to push them apart, even while the Beast's still in a stiff position.

Even the feared Emperor of the Adversary isn't immune to this symptom. 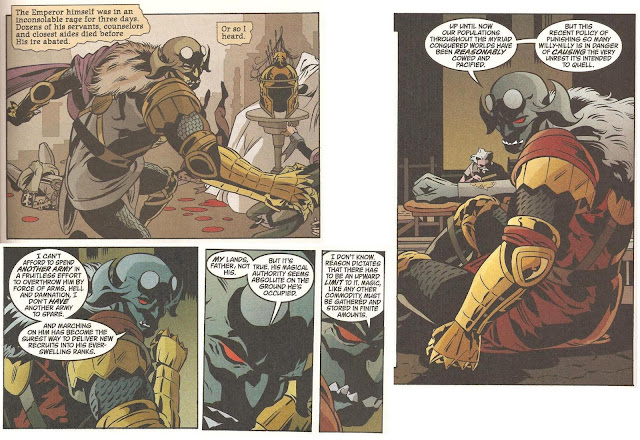 I didn't include samples of seeing him from behind or front facial profiles, since those were easy enough to find for anyone paying attention. Here you can see how the Emperor only has his arm position changed. Otherwise, he's reduced to tight close-ups to avoid temptation from copying his whole body all over again.

However, the worst offender has to be Geppetto. The shadows are constantly casting an omnious look over half of his face so often that it looks like he's purposely putting himself in these overhead lighting places to look meanancing whenever possible.

It's not just limited to the main characters either. Secondary characters who make rare appearances can be shoddily reinserted into unnatural positions whenever possible. Compare the Djinn's swooping pose to his organizing several tanks in the second panel below: 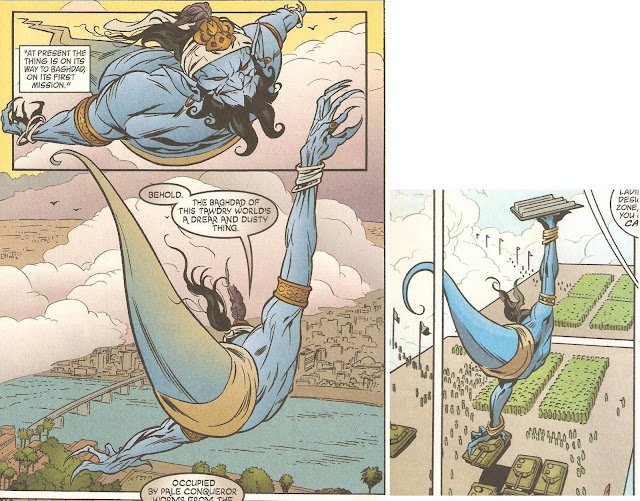 On a lesser case, there's the helpful giant in Cloudland. 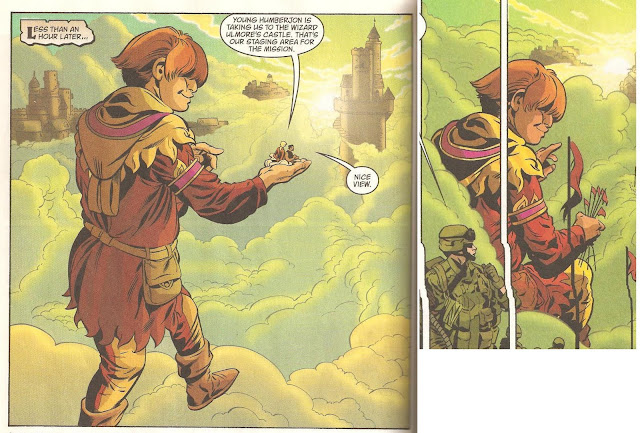 There are subtle differences in the giant's clothes and arm, but the same colour scheme and profile makes it look very similar.

Considering that most Vertigo titles are mercifully canceled around the #50-60 isue mark, with Sandman being a rare exception, ending around issue #75, and Hellblazer going 250+ issues strong, Fables is the most recent contendor to join a small number of adult fantasy comics that're enjoyed by multiple readers. So it's hardly surprising that other artists would be rotated out to give the main artist Mark Buckingham a rest. The day he collapses from exhaustion is the day Fables unique style ends. Sure, another artist could pick up the slack as so many others have done, but the overall tone won't feel the same. There was general disappointment when the cover artist, James Jean left after the 81st issue to pursue other interests, leaving the daunting task of summarizing the interior issue to João Ruas, who's done a pretty good job so far.

Mark Buckingham is hardly the only artist to reuse panels. Manga artists have used this photocopy shortcut too in order to keep up with their insane deadlines. 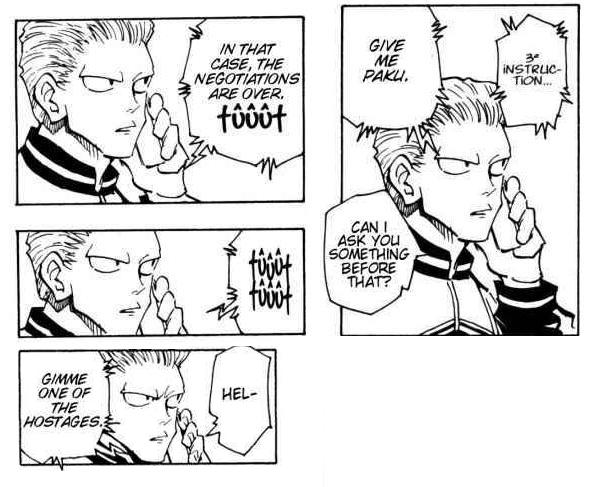 Even legendary creator Naoki Urasawa isn't immune to this symptom. He's not above reusing a face with intense close-ups in order to avoid redrawing the same guy over and over again. 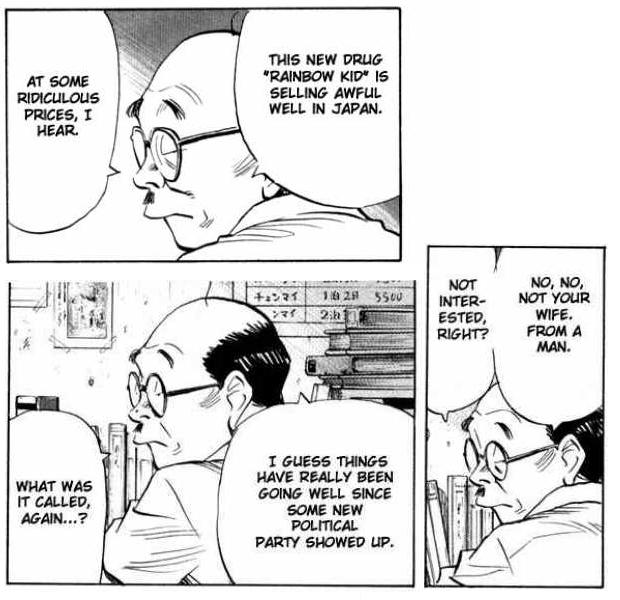 At first glance, these panels below look almost identical, but there are subtle differences in the man's angle of glasses, overhead wrinkles and number of eyebrow strokes. 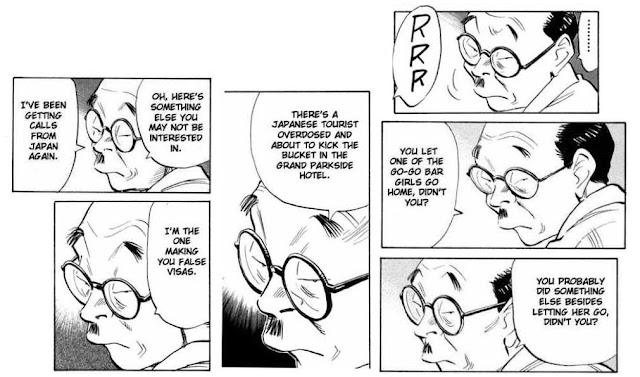 Now for the biggie - can you recognize which faces have been used in this cropped spread here? 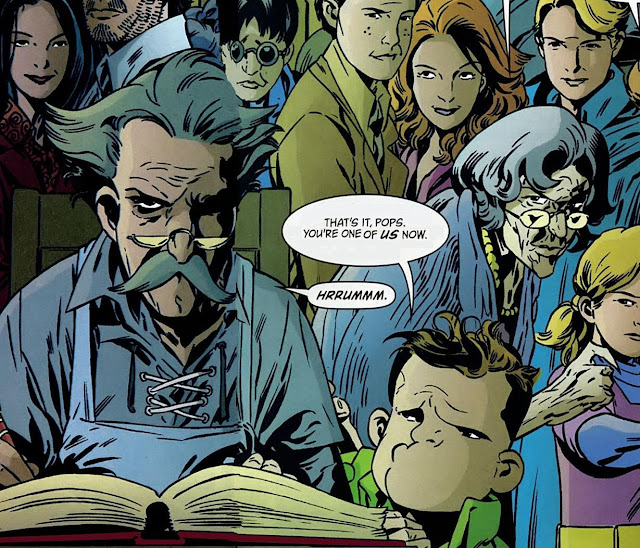 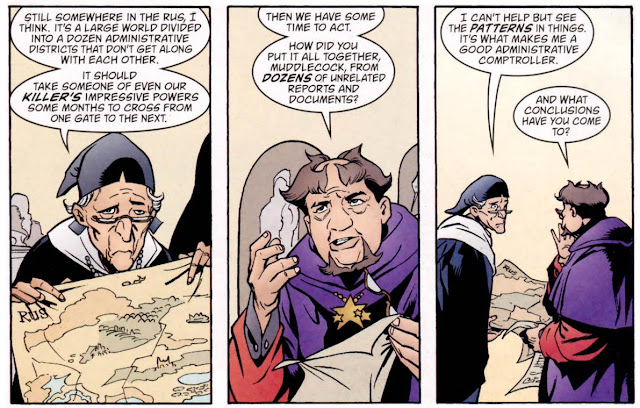 If something isn't done sooner rather than later, we'll all be condemned to limited facial expressions in the future, just like everybody else. Any parting words on the repeated images, Pinocchio? 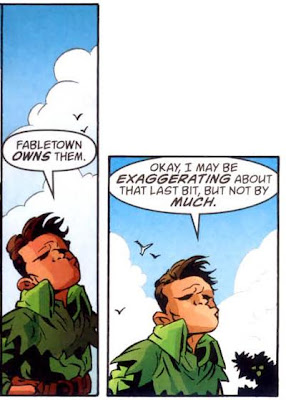 EDIT - Bigby Wolf takes over where Muddlecock left off and finds some more glaring examples both before and after these issues present.
Posted by DeBT at 8:24 PM