After posting my Halloween entry, I was reminded of other things that scared or disturbed me as a child. (This blog’s title is from Kazuo Umezu’s Fourteen, staring Chicken George, who isn’t talked about here, sorry. Maybe when I read more past the first volume.) 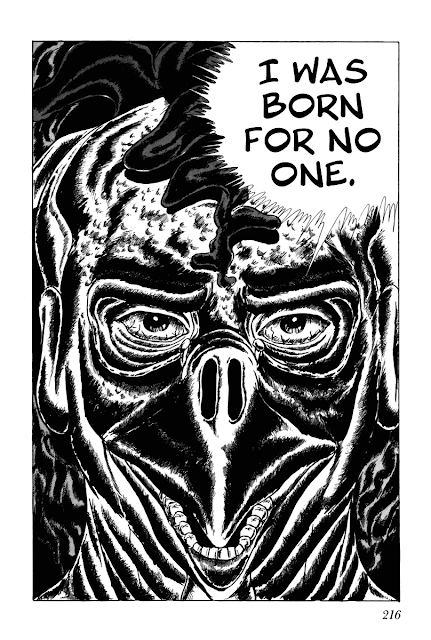 As I said before, children can be scared of things that aren’t intended to scare us, such as clowns or Santa Claus. For example, in The Wizard of Oz, I was absolutely terrified when Dorthy was trapped in the Witch’s castle with the running hourglass. I felt that something horrible would happen once the sand ran out. Exactly what would happen was something that was never elaborated, so I had to resort to my imagination. By contrast, the sequel Return to Oz didn’t scare me that much despite its darker storytelling and faithful adaption. It felt more honest than the earlier movie. The fact that the iconic characters the Scarecrow, Tin Man and Lion were replaced by similar avatars Jack Pumpkinhead, Tik-Tok and the Gump probably made things easier.

Another children’s movie that scared me was The Peanut Butter Solution. The general plot was a boy who was a boy who was so scared that his post-traumatic stress had all his hair fall out overnight. The cure for this was a chemical made of peanut butter (naturally) that overdid the results, causing hair to grow all over his body. As freaky as his scared reaction was, I was more concerned about his initial symptoms first. The kid looked like a cancer patient, and it was made even worse that he had no idea why his family was looking at him so strangely. I couldn’t handle seeing his reaction to his condition. The concept of losing ALL my hair at a young age was too frightening to even contemplate that I couldn’t even watch the rest of the movie afterwards. I still haven’t seen the movie in years, but that could be that it simply isn’t that much of a classic.

There were also some cartoon episodes that had potential nightmare fuel. One was in a Garfield episode where Garfield made a bet with Jon that if he could stop watching TV all day, Jon would stop using his vacuum cleaner, interrupting his TV time. Garfield went through some withdrawal symptoms at first, but managed to make it to the night... which was where things started to get weird.

The TV came to life, calling for his name, and pestering him, wondering why he was ignoring watching him when there were so many good shows to watch. The fact that it went back to normal when Jon wasn’t looking and the warped backgrounds when Garfield was running away from the living appliance didn’t help either. Nor when Garfield pulled the plug, and the TV still managed to remain spooky down to its dying regretful voice. It’s no wonder why, even after Garfield won the bet, he was reluctant to turn it back on.

Another more subtle form of scariness was on an early season of The Simpsons. It wasn’t a Halloween episode - that would be too obvious. It was when Bart sold his soul to Milhouse on a joke, and had all kinds of weird things happening to him. Animals were hostile towards him, the motion-detector doors wouldn’t open, and he lost his sense of humour. When Lisa experimented with slapstick violence without result and said, “That’s creepy Bart. I think you really did lose your soul.”, I felt extremely uneasy for the rest of the episode.

If there’s one problem I have, it’s that I’m too empathetic about the cartoony characters I read. The Smurf short story, The Smurfnapper was left out of the first English version of the Smurfs, with a promise to be released in a future volume. Chances are it’ll be in the next volume, King Smurf, since the 4th volume, The Smurfette would make more sense if we knew about Gargamel about an antagonist. He may be a wizard, but he’s also the cheapest wizard I’ve ever seen. He lives in a run-down shack, wears patched rags and has a mangy cat for company. No wonder he wants to turn the Smurfs into gold.

However, if The Smurfnapper story is in the Smurfette volume, that means it’ll most likely replace the Smurf famine story. That story had the Smurfs foraging all their foods for the long winter, until their warehouse caught fire and burned everything they had. (The water kept freezing so they couldn’t put it out) Seeing these little elfin creatures going crazy from lack of food was (and still is) disturbing, especially since I was much more used to cartoon characters eating too much food. Jughead, Garfield, Dagwood... try imagining these beloved cartoon characters with hunger pains, and you’ll get the general sense of what reading this was like. There was maybe one funny joke in that story, which may be why Papercutz feels reluctant in releasing it. It's not quite a far cry from the blue critters who were used to dramatize a Unicef bombing commercial.

One of the most ironic things that I was most scared of was Anime/Manga characters. I regularly saw Anime VHS videos with the labels Not intended for children on them. I was morbidly fascinated in seeing these things, but was terrified of watching them, because their large eyes freaked me out. I felt that their eyes were TOO emotional, and made me uncomfortable to look at because of what they were conveying. It wasn't until I read the first five volumes of Ranma 1/2 in a bookstore that I was able to alleviate my curiosity. Now, I simply can’t get enough of them. 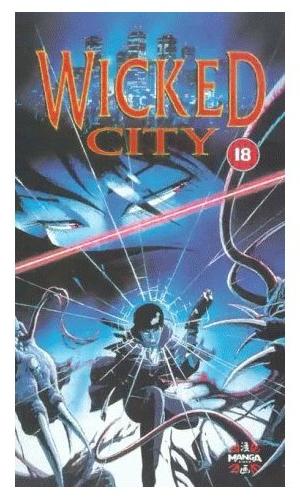 My library had plenty of adult French comics with disturbing themes. Although I couldn’t read a word that was said, the imagery was clear enough in the end. There was a house that faithfully followed everything the designer’s model did to it, including blemishes on the walls and people, and even people’s deaths. There was a racing car that burned up fuel so quickly it had to suck its driver’s blood to finish the race. There was a pool that held the ghosts of all the people who committed suicide in it. Save for the last one, Calypso, I don’t remember the names of the other books, but I’d recognize their art styles if I saw them. 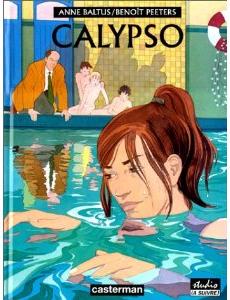 All those European books paled in comparision to the 3rd part of Katsuhiro Otomo’s Domu. It was my first foray into an adult Manga, and I had no idea what was going on. The level of destruction was so one-sided that I thought Cho was the good guy. Then after pages of talk, we got to the denouement where Cho met his climatic anti-climatic end. Kodansha should really re-release this oneshot now that Dark Horse’s no longer bothering to reprint it.

As long as we’re talking about scary stuff, I might as well share some idle speculation on the 100th issue of Fables, which will no doubt feature the big showdown between Frau Totenkinder and Mr. Dark.

SPOILERS APLENTY! Don’t read any further if you haven’t read the comic up to now.

I was probably one of a handful of people who remembered the story of Rose Red, from a children’s book titled Snow White & Rose Red. So when I saw Willingham’s reinterpretation of the dwarf with the long beard, it called back long-forgotten memories of that story.

The penultimate issue had a parlay with Mr. Dark with the North Wind giving proper notice of the duel that Mr. Dark would be facing, as well as a warning to cease what he was doing, since his presence would be attracting forces beyond him imagining. I don’t know about you, but I’m more interested in the aftereffects of his lingering action than the outcome of the duel, due to a subtle hint slipped in the conversation: 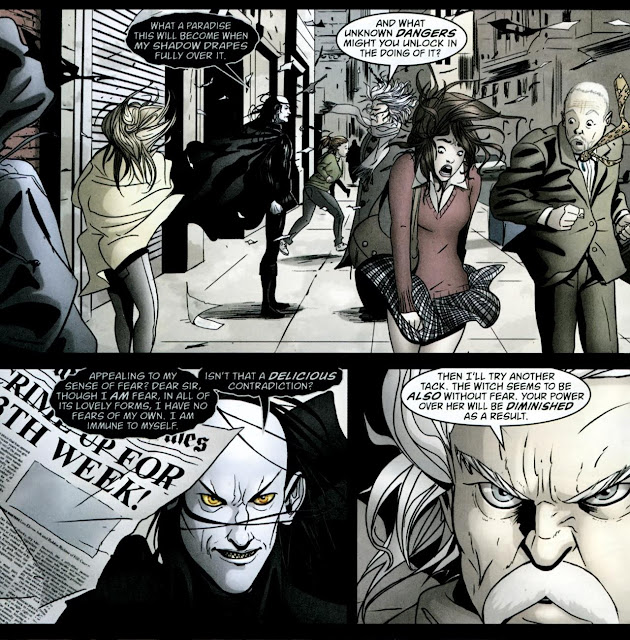 I was reminded of another children’s book, about an old fearless woman who lived with her cat, Cornel. Not to be confused with The Little Old Lady Who Was Not Afraid of Anything. This woman was only afraid of one thing - mice, which was why she had a cat around her.

In this children’s book (whose title I can’t find) - [found - Do Not Open, by Brinton Turkle], the woman was taking a walk on the beach when she came upon a bottle that sounded like it was crying. Upon closer examination, it was a simple bottle, and a child’s voice was saying that it had been trapped for years, waiting for somebody to release him from his prison.

The woman uncorked the bottle, and hear a roar of FREE! in what was obviously not a child’s voice. A plume of black smoke rose from the bottle, forming a 100 feet tall humanoid black creature who thanked the woman for releasing him. He then listed all the atrocities that he would do, causing fear in the people of the world, enjoying their cries of terror, and infesting their dreams.

The woman casually glanced at the black creature in front of her and said that she didn’t find him that scary. The creature then transformed, turning into a horned 4-legged animalistic version with spikier teeth and asked, “Then do you find this form frightening?” “No, not at all.” Then the creature turned into a grotesque green monster so big that only the head was visible on the page. The woman turned away from him, her arms crossed, saying that the only thing she was afraid of was mice. Without further ado, the creature turned into a mouse.

And like any arrogant overpowered demon who cares what the little people think, he was instantly eaten and devoured by the woman’s cat.

“Cornel! Are you alright?”, she asked. The cat just licked its lips and smiled.

As much as Mr. Dark feeds on fear, if his opponent turns out to be more sophisicated than he thought, he would eventually tire out and resort to old tricks, such as finding the one thing the witch is repulsed by, which would’ve been supplanted before the fight started. A simple glance or phrase by Totenkinder’s dislike of mice would make him easy pickings for Ozma’s cat who’s gone unnoticed this whole time.

It would be anticlimactic if after all this buildup, Mr. Dark was beaten by such an obvious tactic. There are several ways that this could be avoided:

1. He turns into hundreds of mice, not just one.
2. He summons mice from whatever surroundings they’re hiding from. No need to transform himself.
3. He sees through the tactic and creates a double that looks like him turning into a mouse, then lets the double get eaten by Ozma’s cat. THEN pull the double whammy on both opponents, thinking the threat was over. THAT would unnerve them.
4. What would be really ironic would be if, upon hearing that Totenkinder was afraid of a mouse, Mr. Dark summoned up Mouse of Fafhrd and the Grey Mouser fame.

That could be why Willingham turned Frau Totenkinder back to a younger girl. It would look bad if he plagiarized from an identifiable souce. Of course, this is all idle speculation, and may be pointless if the results are something else entirely.

Just remember, if the 100th issue of Fables has what I just predicted, you heard it here first!
Posted by DeBT at 7:41 PM