There were multiple previous posts that I wanted to do some updates on, due to some acquisition of new information and scans, but was reluctant to update them individually with nobody around to notice them. So I decided to be upfront with everything new, and post everything noteable in one go here.

First up, remember the great Fables controversy? Well, I took another look at the earlier volumes before the noticeable Goblin cover, and found out the copying started even before then. 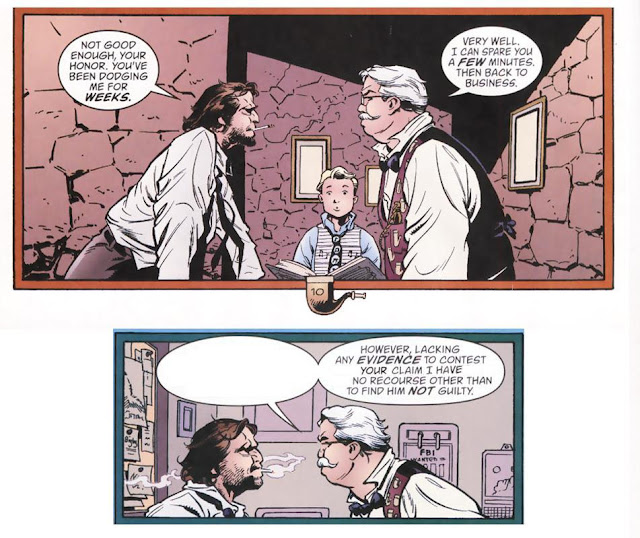 Oh you want proof? Well, I'll give you proof. Our first target apart from our face-off, is right outside our office. Here, Prince Charming does the remarkable feat of going outside the building without ever actually moving his legs. One might suspect a treadmill is involved so he wouldn't have to sully his perfect suit. 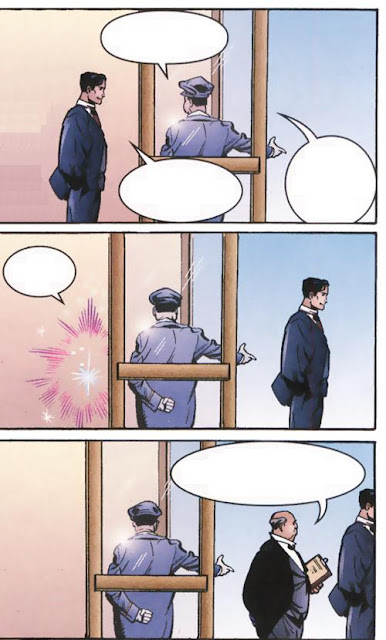 I'm sad to say that even Snow White isn't free from suspicion in this guilt. Her position while waking up and talking to me is consistent throughout. While I wouldn't normally complain about the placement of her perfect hair, it becomes rather laughable throughout. 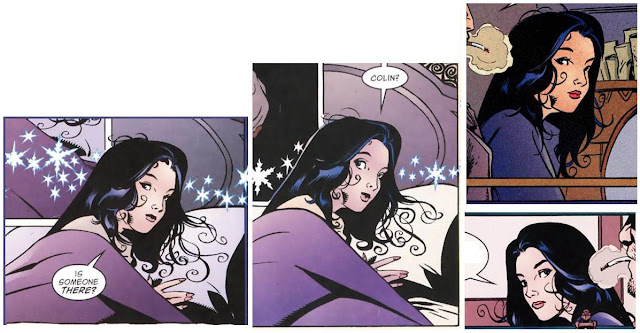 No this isn't envy that her bed hair never requires brushing and looks better than mine. It's basic common sense.

Not enough for you? Well, I managed to double-check the 11th book again, since the library copy was out, and found some more examples to add to the pile of evidence. Remember Pinnoccio’s ugly mug? (Who could forget it?) Well, here’s some more glaring similarities.

Faced with the threat of upcoming death of one of his friends, he suddenly developed a defense mechanism and conveniently forgot his stone-faced gaze and reverted back to a familiar Marlon Brando-type sneer. (Not that he actually succeeded...) 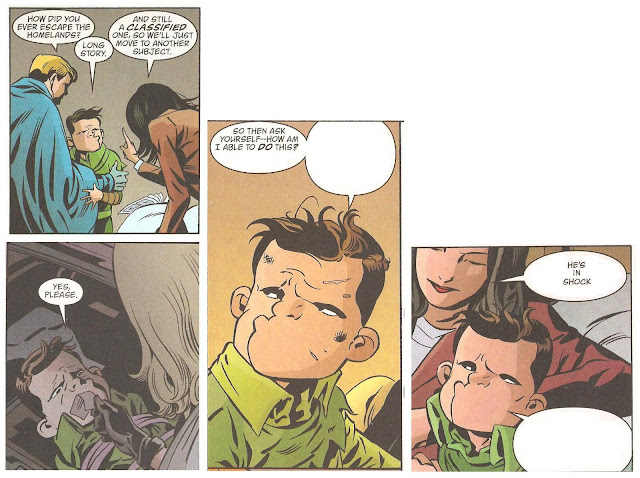 When it comes to tyrannical president-for-life dictators, they rely on repetitive images to bolster their image. In the case of the Emperor whose iron rule declares that nobody gazes on his figure for too long lest they cower in fear of his appearance, this becomes something of a hindrance. He has a few words to say about the competence of the artist working on his likeness: 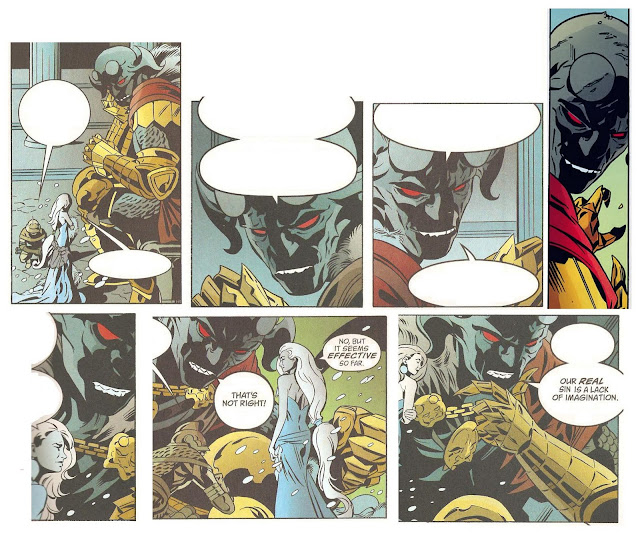 I could post some more obvious examples of his fearsome visage, but I think I've made my point. 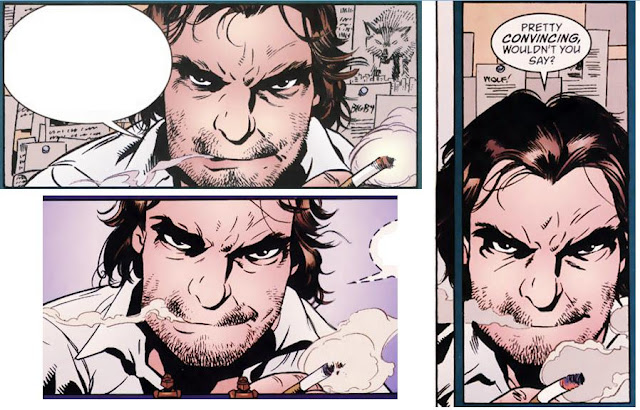 Changing topics, one of my longest posts was about the relevance of the Foobjournal continuing its barbs on the reprints of For Better or for Worse. I wrote a throwaway line about how the family strip in seach of an ending reminded me of a Peanuts strip. I found the relevant comic in a book titled Snoopy's Guide to Writing. (Considering the number of his multiple rejection slips, he’s the last muse we should be going to for influence) 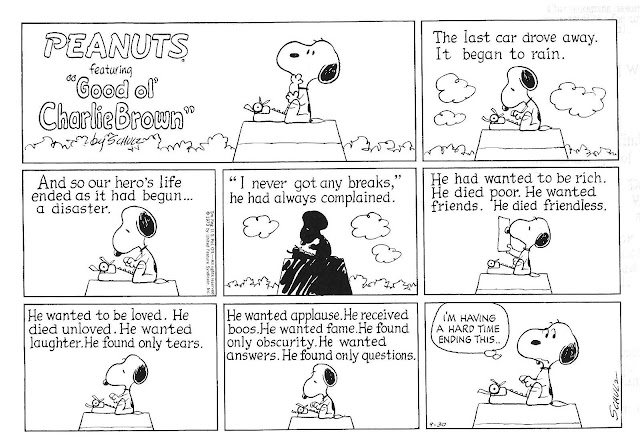 While we’re talking about the Foobiverse, there was a recent discussion about whether characters had done mundane things that were beyond redemption. One example that jumped out at me was where Deanna was more interested in shopping for suitcases worth of clothes, several years after being a health volunteer for poverty-stricken Africans.

It was very reminiscent of another Cerebus similarity where Jaka couldn’t conceive of travelling with the same clothes for more than two days, despite living on a mountaintop for months without complaint in Jaka’s Story. (This was also around the time Dave Sim started to lose it with his women = soul-sucking voids worldview)

In my defense, I only focused on the first two decades of For Better or For Worse. Whenever I read anything that was written in the last ten years, my mind starts to wander. In fact, my Sunday comics collecting started to become less obsessive around the time Calvin & Hobbes left the paper for good, and there was a lack of worthy strips to replace it.

In the latest One Piece chapter, after 2 ½ years of sidequests, the Straw Hat crew has finally made it to Fishman Island. I mentioned that the main characters have a tendency to inevitably destroy whatever new territory they come upon. Out of the many characters that’ve been introduced in this underwater village, a mermaid seer decides to take a peek into the future of the Straw Hat captain, and makes this prophecy:
On another note, I have a theory on who’ll be the newest member to join the Straw Hat crew. It’ll be Jimbei, former Warlord of the sea. In addition to having a connection with Luffy’s brother, who Jimbei was good friends with, it’ll also keep Luffy’s involvement in the Navy/WhiteBeard War from being a waste of time.

There was some fear that having such an overpowered player join the crew would be seen as cheating, but since everybody’s gone to the trouble to take two years to power themselves up to face the upcoming threats, Jimbei wouldn’t seem out of place with the others now. Not to mention that his experience in the water could rescue any Devil Fruiters from sinking and help Nami’s navigation charts. Besides, as evident from the recent chapters, having a female mermaid join the crew would be hazardous to Sanji’s health.
Posted by DeBT at 9:33 PM