Generally, I don't enjoy going to parties.  The preparation of food and clean-up (before and after) tends to stress me out to no end.  If I am ever invited to a ritual where my presence is required or mandatory, I take great pains to mentally prepare myself for the upcoming ordeal.  If at all possible, I check to make sure that I'm able to get away under my own power.  Preferably via bike or public transportation.  This gets trickier when bad weather gets involved, since it greatly interferes with my options.  "Always have an Escape Route handy" is my motto in these situations.

The exception is when doing small-scale celebrations within my family.  The pressure isn't as intense to impress everybody using fancy silverware that's used in occasions like these to show how smart and sophisticated we all are, as opposed to the rest of the year.  this includes Hannukah and Passover... and that's pretty much it. 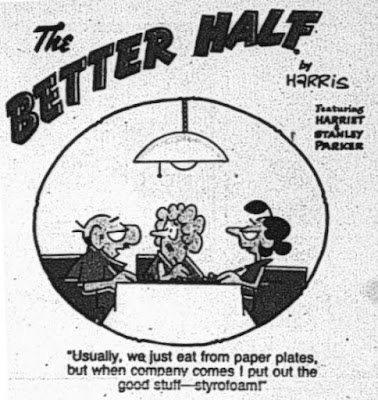 One aspect about celebrating holidays that aren't part of the public conscious is that there are certain aspects of traditional traditions that can sound utterly perplexing when heard for the first time.  In Passover, one of these is the haggling over the Afikoman, a sort of dry After-Dinner Mint made of unleavened bread.  This is generally left to the eldest child, and is really their first foray into bargaining over a deal.


Mother: Hmmmm.... we seem to be missing the essential Afikoman, which we need to complete the meal.
Could you give it back?
Child: What's something like this worth to you?
Mother: It's VERY important.  Without it, we can't finish our desert.  We'll just be eating until we're stuffed.
Child: Doesn't sound that bad to me.
Mother: Without it, we would have to keep up reciting prayers up until 3:00 AM.  You really want to continue the service until that late?
Child: Well, I wouldn't mind trading it for the latest gaming system.
Mother: Too expensive.
Child: Uh - wha?  But I thought -
Mother: Try asking for something more reasonable.
Child: Well - how about this new hot game?
Mother: Is it over $50?
Child: A little but -
Mother: Then choose something under that range.
Child: WAIT!  How about I pay for half, and you pony up the rest?
Mother: How will you pay for it?
Child: I've got gift certificates.  I've got monies from other relatives I haven't spent yet.  I'll do odd jobs to make up the rest.
Mother: How's this - I'll pay for the game in whole if you'll clean my sink, weed the garden and walk the dog for a year.
Child: Make it six months and you've got a deal.
Nine months.
Child: Eight.  I wanna play that game sometime.
Mother: You've got it.  Now, hand it over.
Child: Here you go.
(Inwardly from both sides)  Sucker.

Seeing as this was potentially the last time I'd ever get the chance at hiding the Afikoman ever again, since my Sister's Baby would now be hogging the spotlight for this ritual, I figured I might as well go the full hog in one last blast of spontaneous creativity.  Much like the tail end of video games on a console (Startropics 2, Legend of Zelda Oracle of Seasons, Oracle of Ages, Shantae)

Of course, this was no easy task, since from where I was sitting, my corner of the table meant having to brush past at least two people who'd have to get up from their seats to make room for me.
My attempts at subterfuge was constantly thwarted, since it was noticed that I was getting up from the table more often than usual.

I hastily wrote down a ransom note on several pieces of scrap paper to put them in place of the Afikoman's easily exploitable hiding place.  I had to use several, since I made the mistake of writing too large.  But otherwise, my illegible writing wouldn't have been readable. 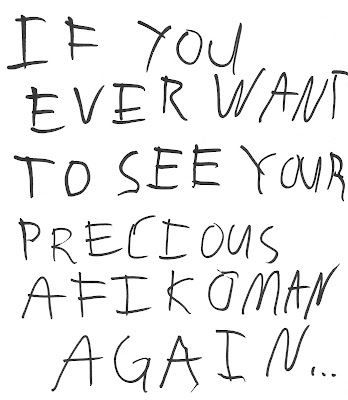 I was inspired by my Dad recording the baby eating the new foodstuff and having watched several Police Procedural TV shows.  At the moment of discovery of the Afikoman's absence, I'd suggest "reviewing the tapes" to see if there was any forensic evidence.  This was further bolstered by the presence of a friend of mine who was studying to become a policeman.  This last line wouldn't have been too much of a deterrence, since technically, he wasn't a cop yet. 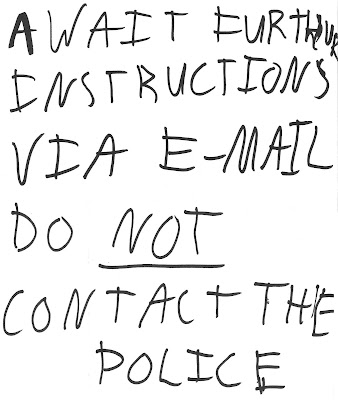 My plan was to ham up the presentation as much as possible, denying all allegations of guilt, even though I "might" be close to sources who knew somebody who knew something.  Ask my rent-a-cop buddy if he could gleam any clues from the notes, down to a handwriting analysis and fingerprints.  If mine were found, I'd claim that I handled the paper, same as anybody else.  Maybe you should be looking into THEM instead!

Sadly, as with my lofty plans, this was stymied by the simple fact that said cop-in-training had to leave early.
"No problem", I figured.  At least my sister would be able to enjoy my harmless prank.
Fat chance.  Turns out she had to leave before her baby started getting cranky(ier).

I was barely able to rush out of the bathroom before they left without further knowledge of my intentions, and showed them the ransom note and all the implications I intended.  My family had a good laugh at my expense, which was the most I could hope for.
Posted by DeBT at 2:51 PM