I generally struggle during of Passover, since we’re not supposed to eat any bread products for the duration of the week. I get a natural high from breadstuff and love pasta a lot, and its practically impossible to package a matzah sandwich without it crumbling to pieces. My family isn’t exactly devotedly religious, but I still feel entitled to at least follow a few of our customs, even if they don’t make sense.

I know that the marror is symbolic of our suffering during the time of slavery in Egypt. Or as the ancient texts say, we were in bondage (kinky!) to the Pharaohs. Normally my suffering is limited to trying as little of the bitter stuff as possible, and refusing any soft cushions to lean on my chair (I prefer hard back resting surfaces myself, since soft surfaces are painful to me) These miniscule labors in themselves aren’t too bad in passing, but I still find myself cringing when we approach the Jewish song with the chorus Dai dai dai nu (literally; it would be enough). This is equivalent to hearing the lyrics to The Little Drummer Boy over and over again. Singing the verses once is tolerable enough, but having it repeated ad nauseam begins to wear down on you, and you begin to loath hearing them all the time.

I have a tendency to speak the English portions of the text in a rapid-fire pace so that we’ll get to the food quicker. I’ll go through the 4 questions so fast that only the next stanzas count as breathing spaces. A typical rehersal sounds something like this: Mathanishanahalilahazehmekolhalaylotmekolhalaylot. (short pause for breath) Shebikholhalaylotainu... (you get the idea)

I’m not alone in wanting to skip through the general rehearsal and doing the cliff notes version of the Passover service to get to the meal faster. As quoted in a news article, "the Hagadah is the most frequently skimmed religious book in history". Even more than the prose pages in Cerebus’ Later Days. Statistically speaking, more people are likely to encounter the former than the latter. 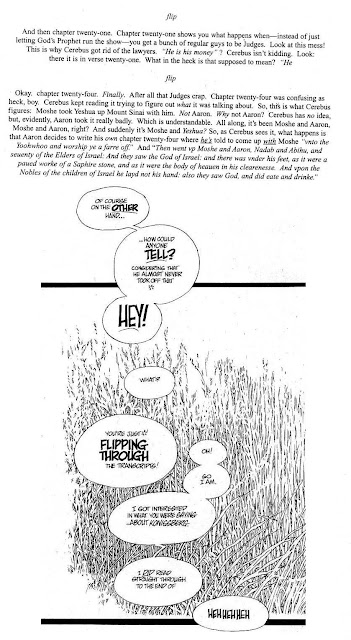 However, not everybody is as quick to go through the motions. More devoted practitioners of the faith are determined to make sure that people get the general idea behind the true meaning of Passover. For instance, one of my Sister's friends went to a dinner with a Lubavitch sect who only served a single bowl of cold soup for the meal. That was the entire full course. Their reasoning is that food isn’t the focus behind Passover - the story is, which runs counter to a lot of Jewish holidays, which is a general excuse to reminisce and eat. 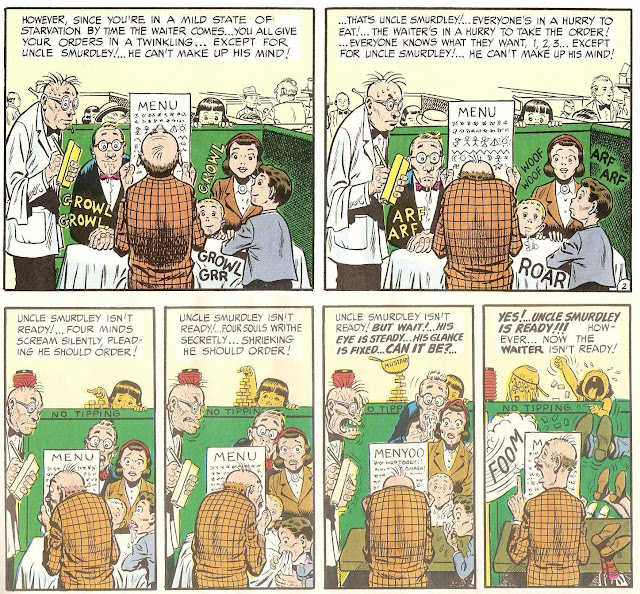 However, even the Lubavitchs pale in comparison to an ultra-orthodox seder that my sister heard about. In this instance, a friend of hers was invited to a seder with the warning that the food might “take awhile before we get served.” “No problem”, she thought, she could handle waiting for an hour going through the motions. However, her confidence soon faded away several hours later when they were still doing the pre-meal prayers. The service started at 8:00, and it was already midnight - and they still hadn’t gotten around to the meal yet! When she passed out around 1:00 in the morning, she was woken up at 3:00 when the meal was finally served. Keep in mind that the meal is only the halfway point of the Passover seder, which means there was still more to come after. To add insult to injury, she’d spilled some wine (the only thing she had to drink at random intervals) on her dress when she fainted, and had to wear that red badge of shame on her for the rest of the night. (Technically morning at that point)

Good thing it wasn't the Saturday seder, when they're more serious with their prayers. There's a reason these events take place on the weekends, otherwise what else would you to do with all that extra time? That kind of service makes Jon’s stalling tactic in A Garfield Thanksgiving look positively quant in comparison. In these instances, it’s better to eat before starting the meal. Otherwise all you’ll remember is your severe hunger pangs while you wait for the service to finally END. 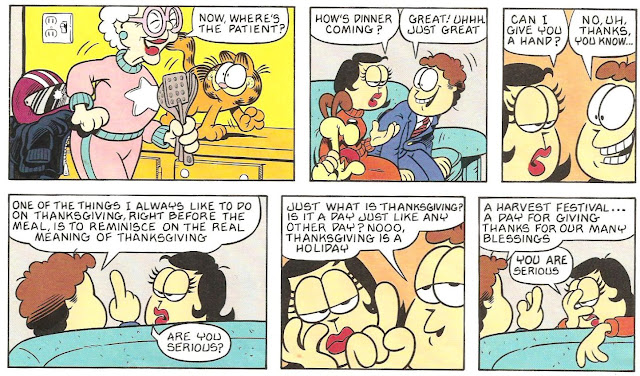 One of the dirty secrets of American comics is that very often, the majority of the prose text is perfunctory, and can pass along very well without it. You can get the main gist of the story if you just pay attention to what the characters are saying and ignore the background narration boxes. Only a few writers are talented enough to make their narrative essential to the action. The rest are pale imitators trying to latch onto a storytelling device they’re unequipped enough to qualify as their own. In these instances, I’ll read the general balloon dialogue, get the general gist of the overall story, then go back and read the boring prose stuff to see if there’s any relevance there. If there is, I’ll read it again. If not, I won’t bother. Either way, the meat and bones of the text shouldn’t be considered an essential part if the general audience doesn’t feel like reading about it in the first place. Normally children hate it when adults skip over portions of a story, and develop a desire in wanting to know details that were left out... except for where food is involved.
Posted by DeBT at 3:03 PM