2016's been quite the banner year for the death knell for many well-respected entertainers, celebrities and cartoonists, and Marcel Gotlib's just joined their ranks. 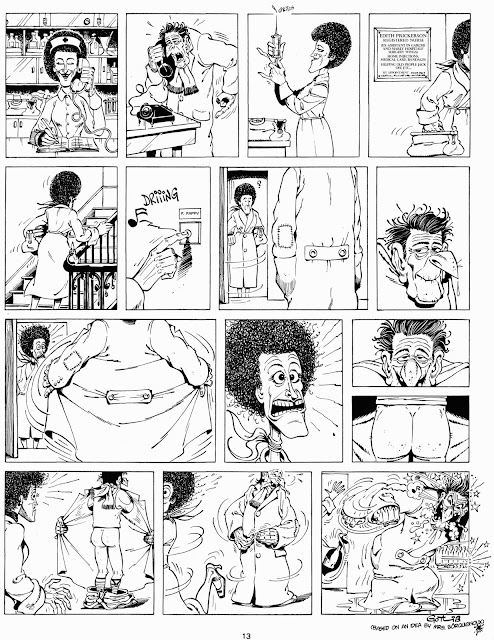 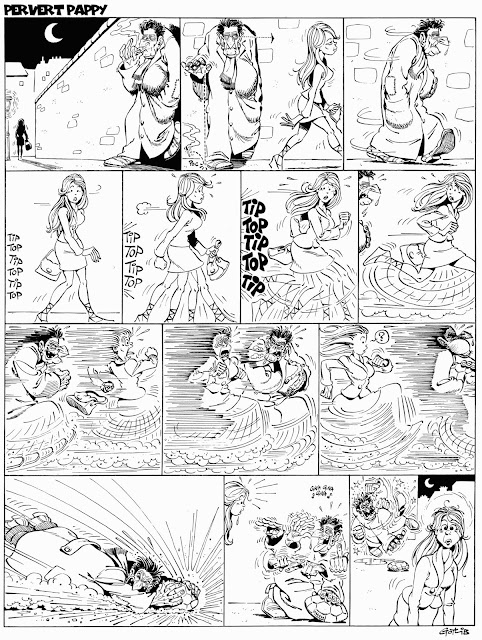 A comprehensive list of his created comics can be found here, ranging from a Droopy-like dog, to his farcial "Educational" Rubrique-à-Brac comics, to his Superhero parody Superdupont, to his adult humour magazine Fluide Glacial.
Several of his comics veered into controversial territory, such as the scoutsmaster who wanted to teach about basic honest survival skills, while his underling underage children wanted nothing more than to make out.
His numerous avatars include a caricature of the artist himself, Issac Newton getting hit on the head with an apple, and a large ladybug.  Said ladybug made a cameo appearance in the 4th of Papercutz's Dinosaurs comics, in regards to a reader's question answering to the name of Gotlib.
But more than the subject material, the most intimidating aspect of Gotlib's comics is the sheer amount of verbage a single page entails, which consists of multiple balloons of side commentaries, wordplay and various sound effects.  While enjoyable on a panel-to-panel basis, it's essentially an assault on the senses when taken in all at once, and is easier absorbed in smaller doses.
His Rubrique-a-Brac comics have been chopped up and reassembled into chunks similar to other prepackaged pocket book formats much like various Superhero comics, and fittingly enough, MAD Magazine.  When seen this way, it becomes easier to absorb the contents of the individual panels without worrying about being distracted by the kinetic action happening elsewhere on the already crowded page. 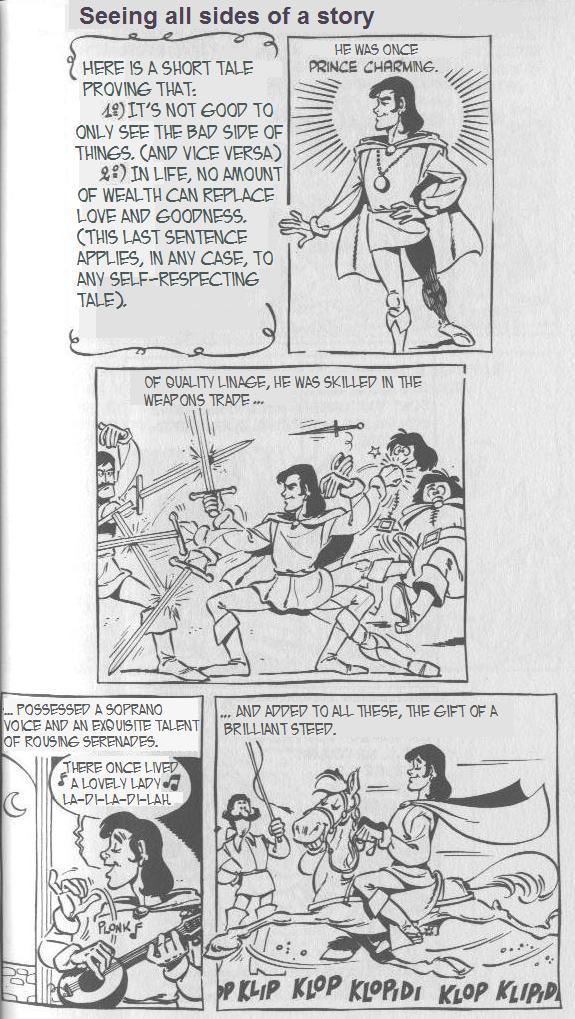 I figured this was a good time as any to show the first half of the Fairy tale comic that I did years ago.

Now, we get to see the backstory of this Prince Valiant-like Prince Charming. 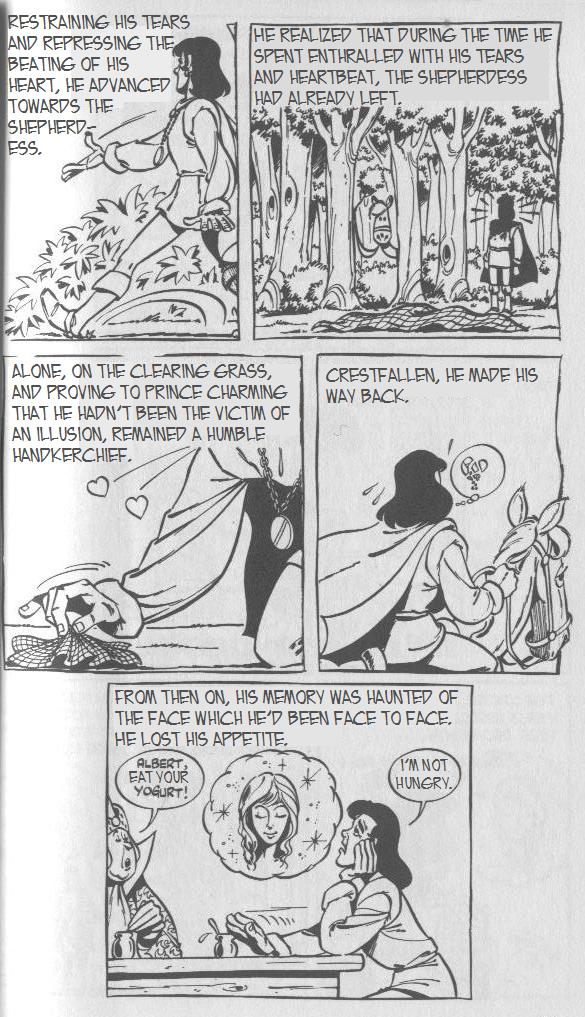 Not that we needed an excuse to understand his motivation. 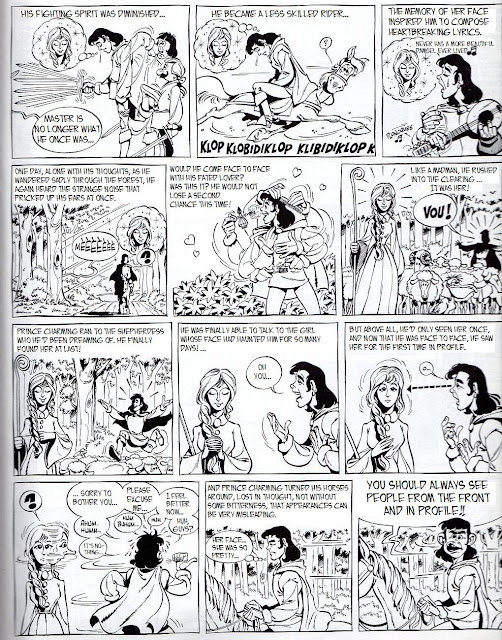 Apart from my amateur attempts, the only other known attempt at scanlating Gotlib's massive library of works is the mostly silent comic, Pervert Pappy, where a perverted creepy old man with a constantly dripping nose constantly engages in ludicrous scenarios that appeals to his... weirdly specific fetishes. 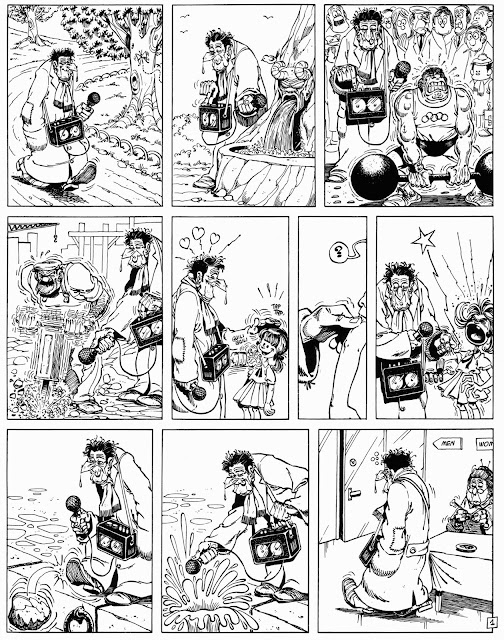 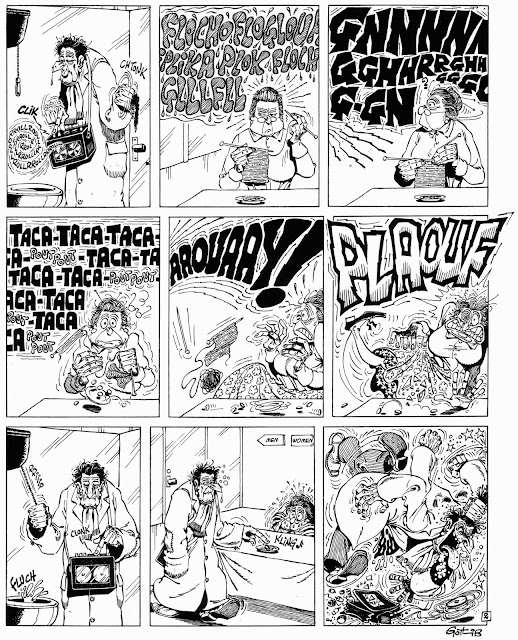 I suppose the main difference between Gotlib and Don Martin is that Don Martin has the temperament to space out his increasing level of concentrated weirdness to one page at a time.  Gotlib has all his sight gags made available for full viewing on first sight.  While I've expressed my displeasure at reorganizing the panels of a comic page (especially if they're out of order) into another unsuitable format in the attempt of attracting new audiences, I'd make an exception in this case.
Posted by DeBT at 7:26 PM