This is something I've seen quite often, but has hardly ever been mentioned.  This isn't in the same realm as Perplexing Reprints where there are various panels drastically different from their first printing.  Nor is it in the vein of being confused from the layout of a double-page spread.  This refers to two panels being accidentally switched around so that the comic in question winds up being slightly out of whack.

This has happened more than once, and one of the easiest examples I know of is this early Calvin & Hobbes Sunday comic: 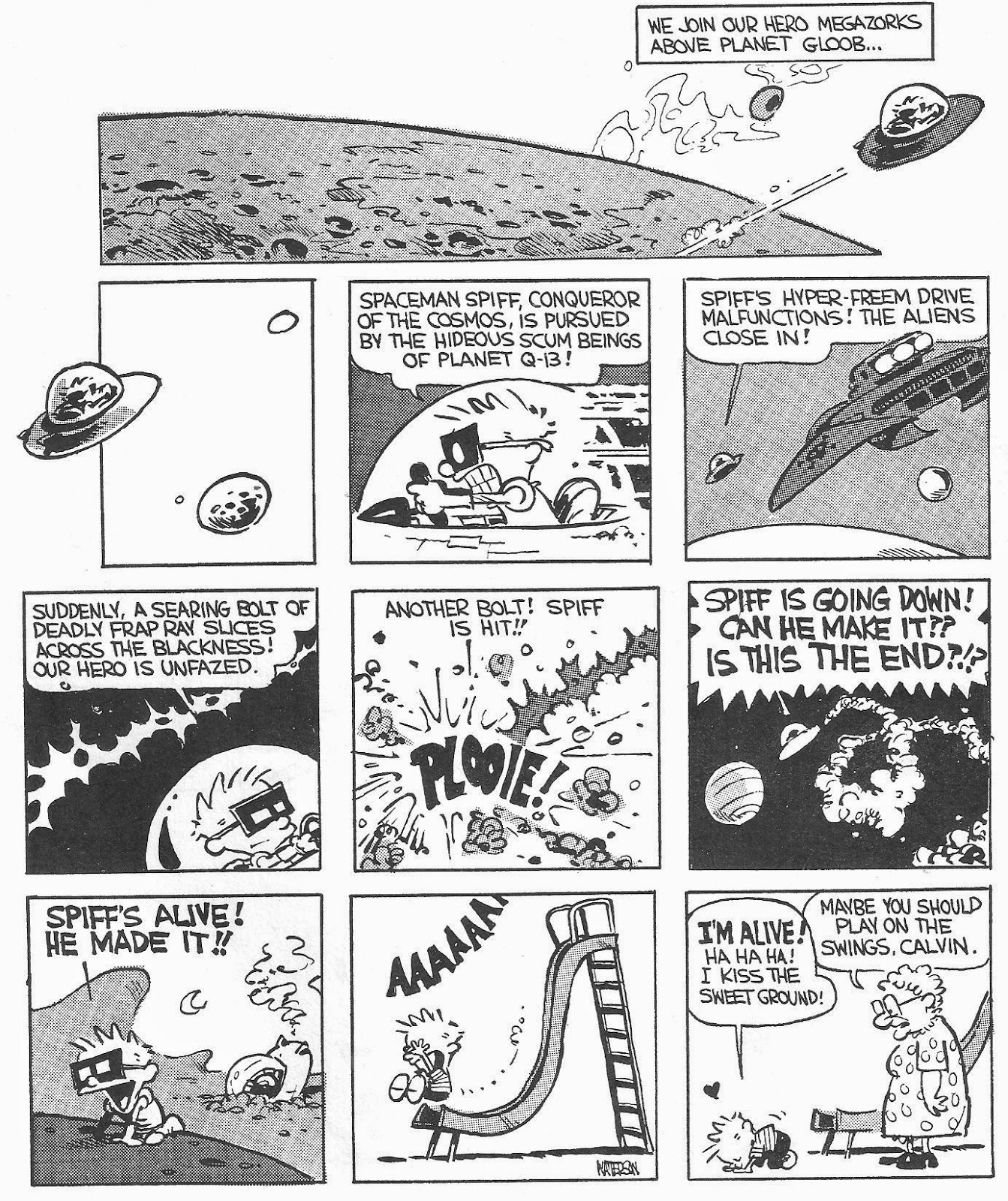 For a long time, I thought this was how it was supposed to go, but other more faithful reprints have had the last two penultimate panels switched around so that Calvin winds up sliding before announcing his mortality verification.  Even now, it's difficult for me to go back to the right version, despite knowing that it's the proper way to go.

This wasn't an isolated incident, since I wound up seeing instances of switched panels everywhere.  I don't have the albums and treasuries in question, but these recreations should be close enough to get my point across. 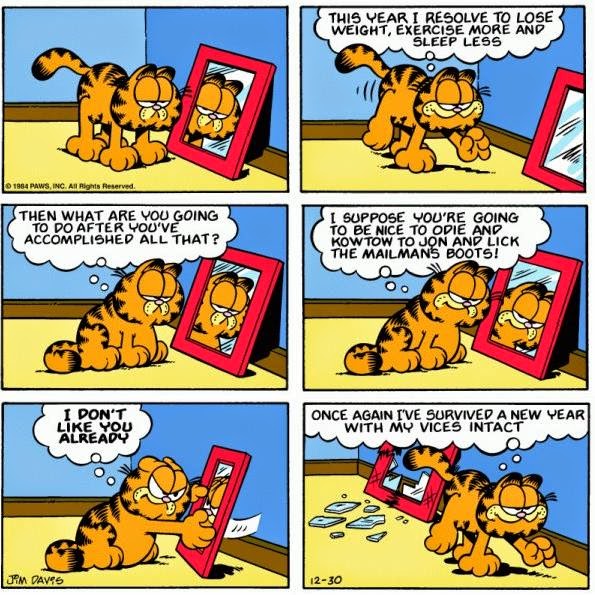 With these panels out of composition, Garfield winds up acting rather schizophrenic, long before Garfield Minus Garfield relayed that role to Jon. 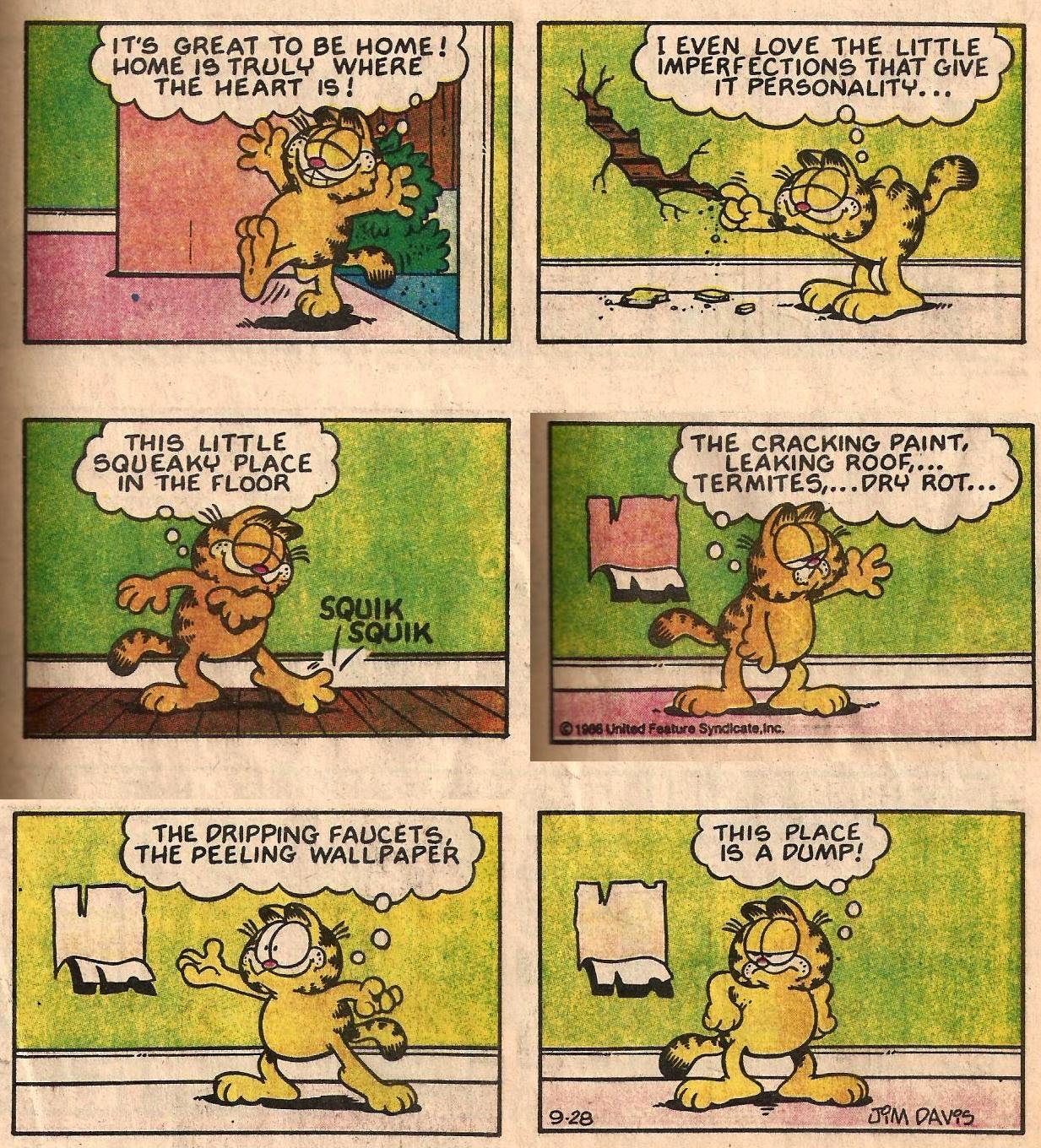 While the composition of the bodies are more consistent, the overall flow of events is a mess.  Garfield winds up losing his enthusiasm halfway through, only to suddenly regain it near the end, and then lose it completely.  While I can look back and laugh about it now, it bothered to me no end, because it wasn't how the joke was supposed to go.  Knowing comics forwards and backwards isn't quite the same when they're slightly out of alignment.

EDIT - After thinking for awhile, it occurred to me that ironically enough, I got the composition of the rearranged panels wrong.  It was most likely the 3rd and 4th panels, rather than the 4th and 5th ones.  I must've subconsciously chosen this new alignment, solely because it was more pleasing to the eye. 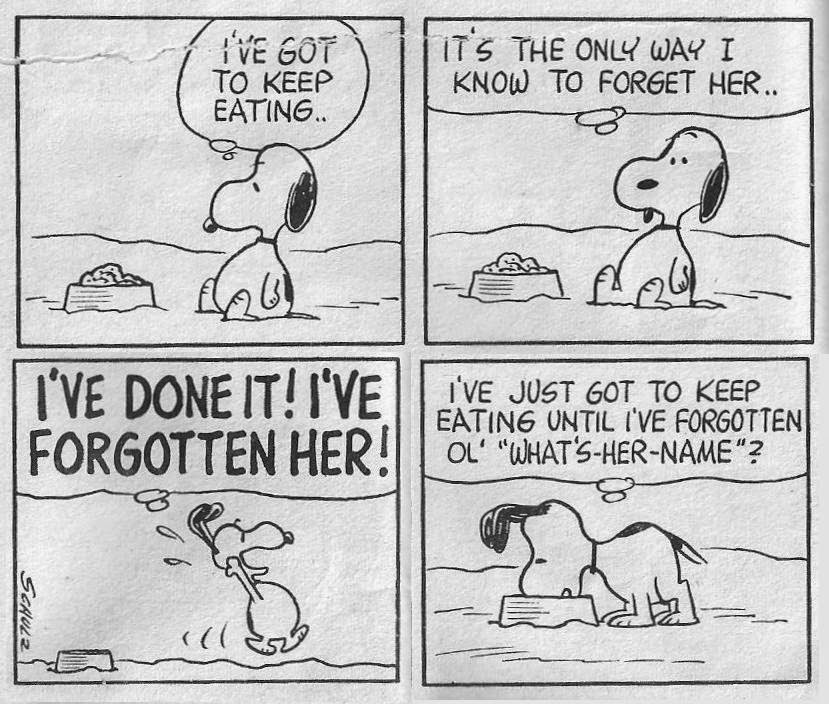 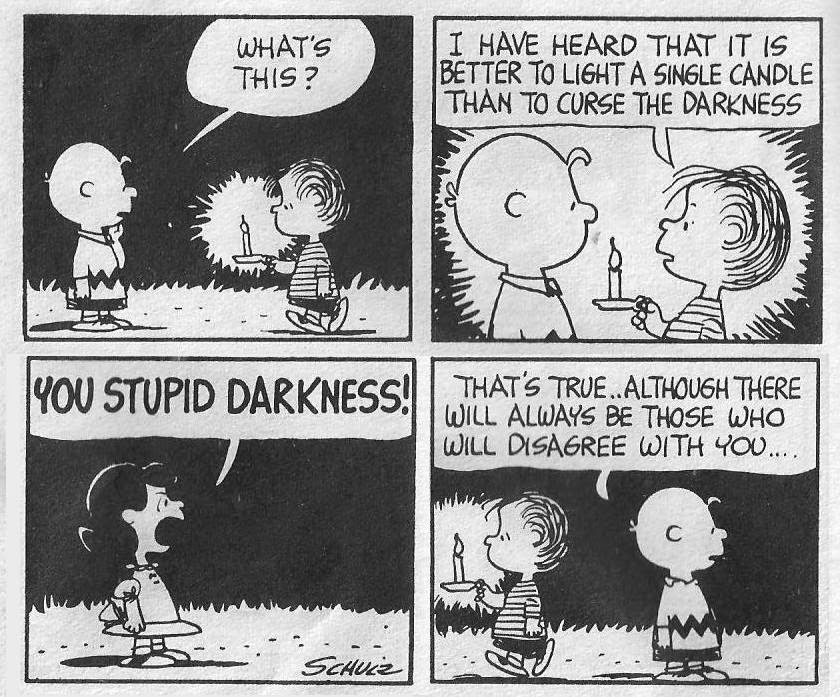 The Peanuts collection Brothers & Sisters: It's all Relative was the worst offender, having not one, not two, but FOUR comics, each with the same mistake.  See if you can figure it out. 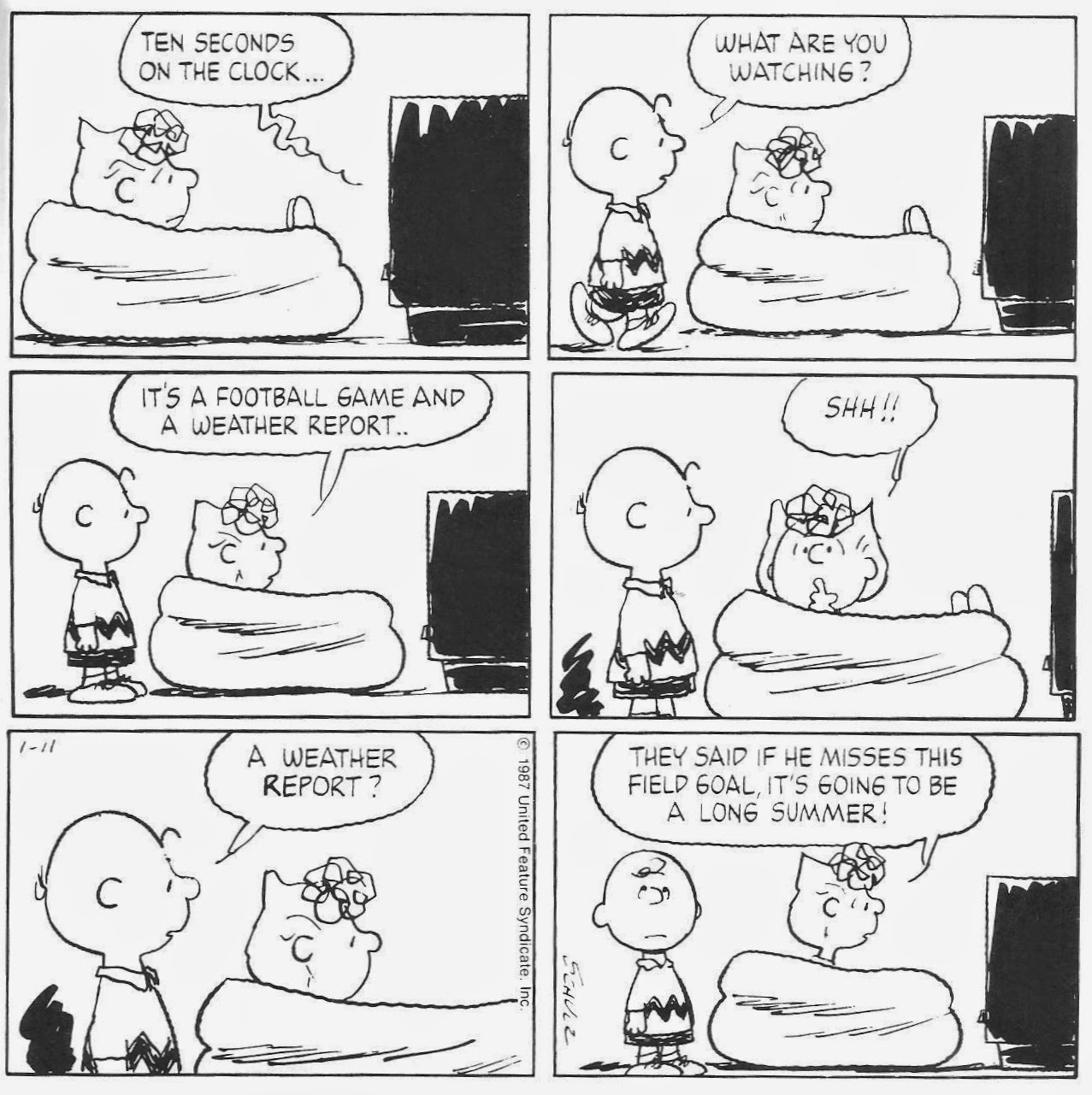 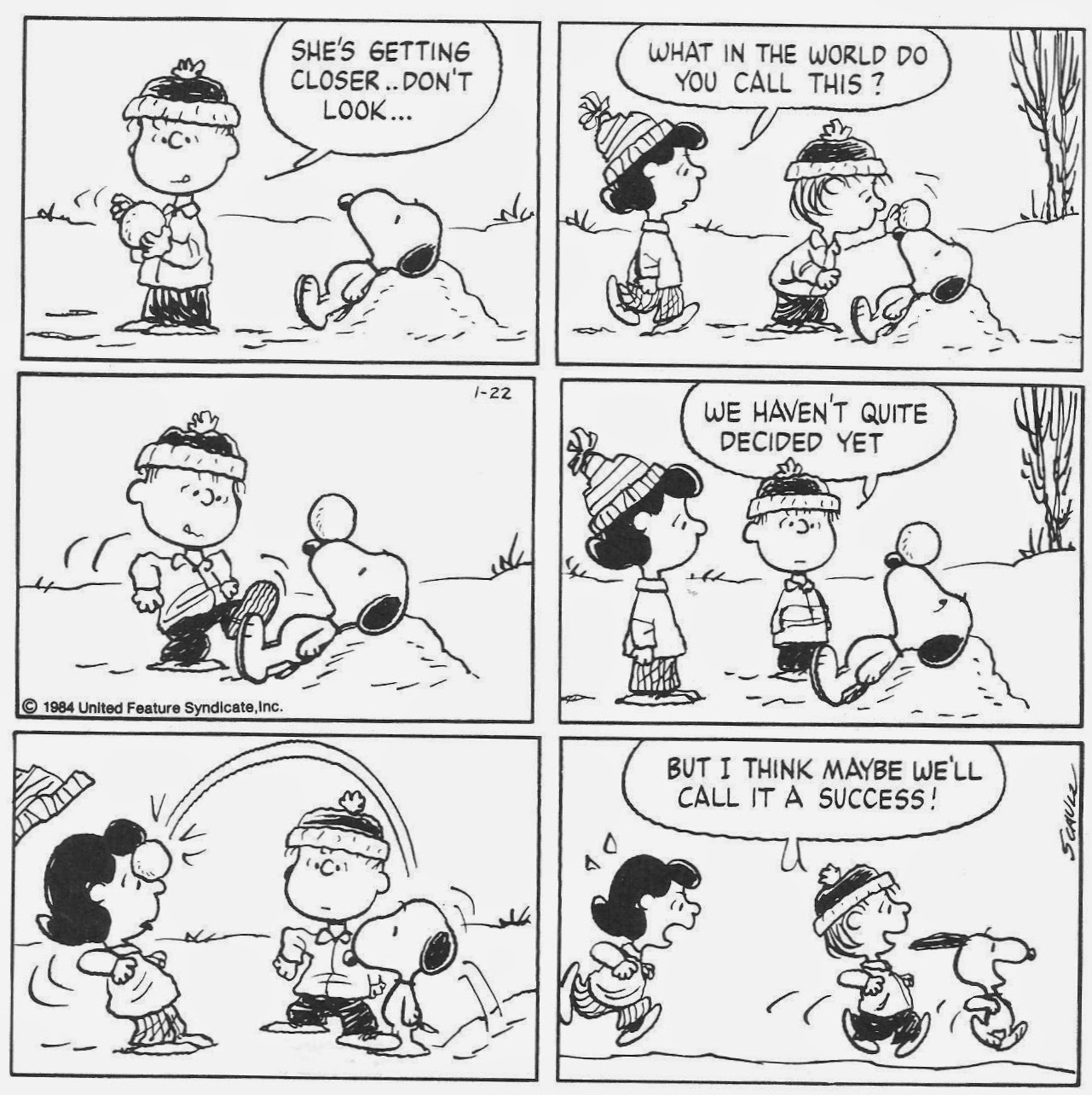 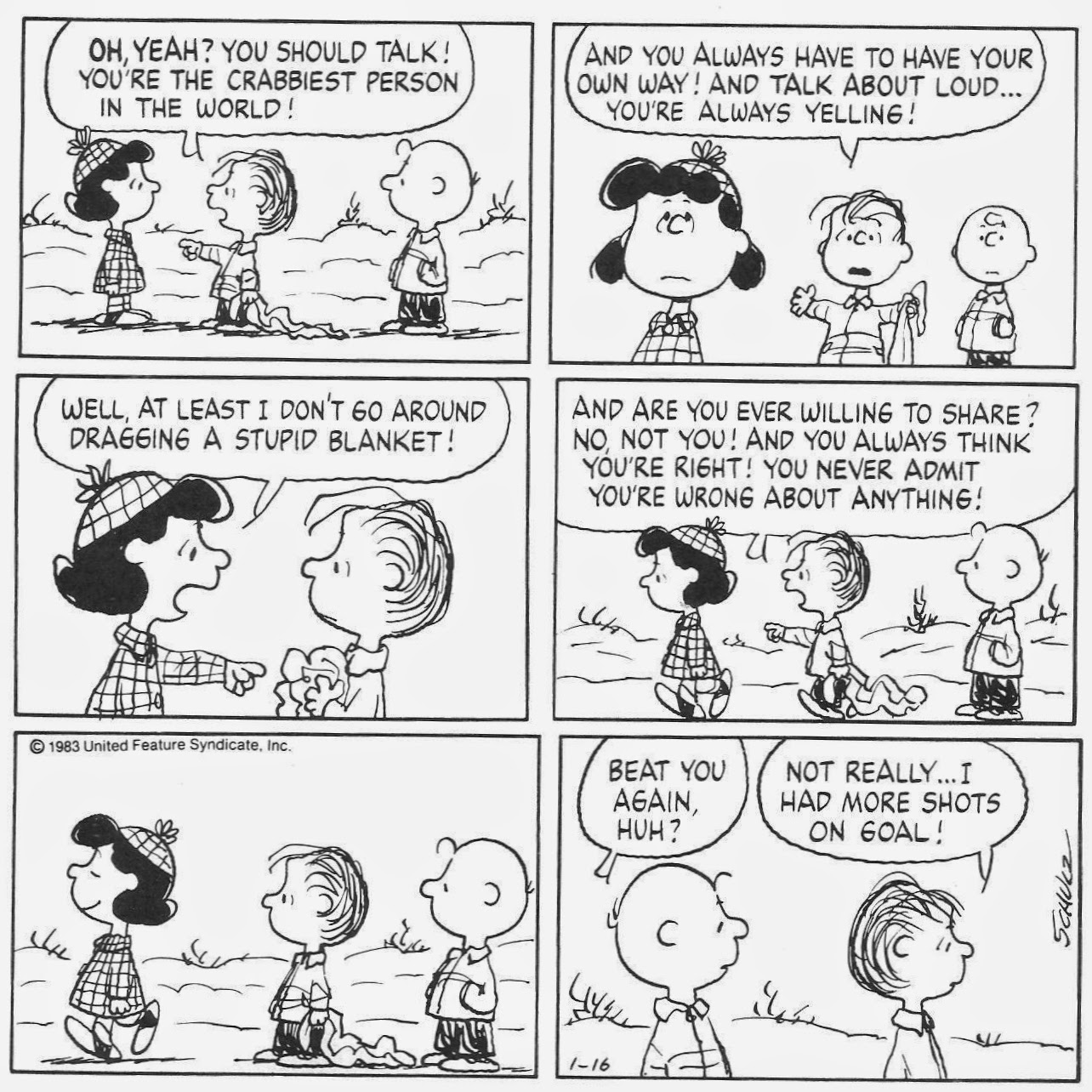 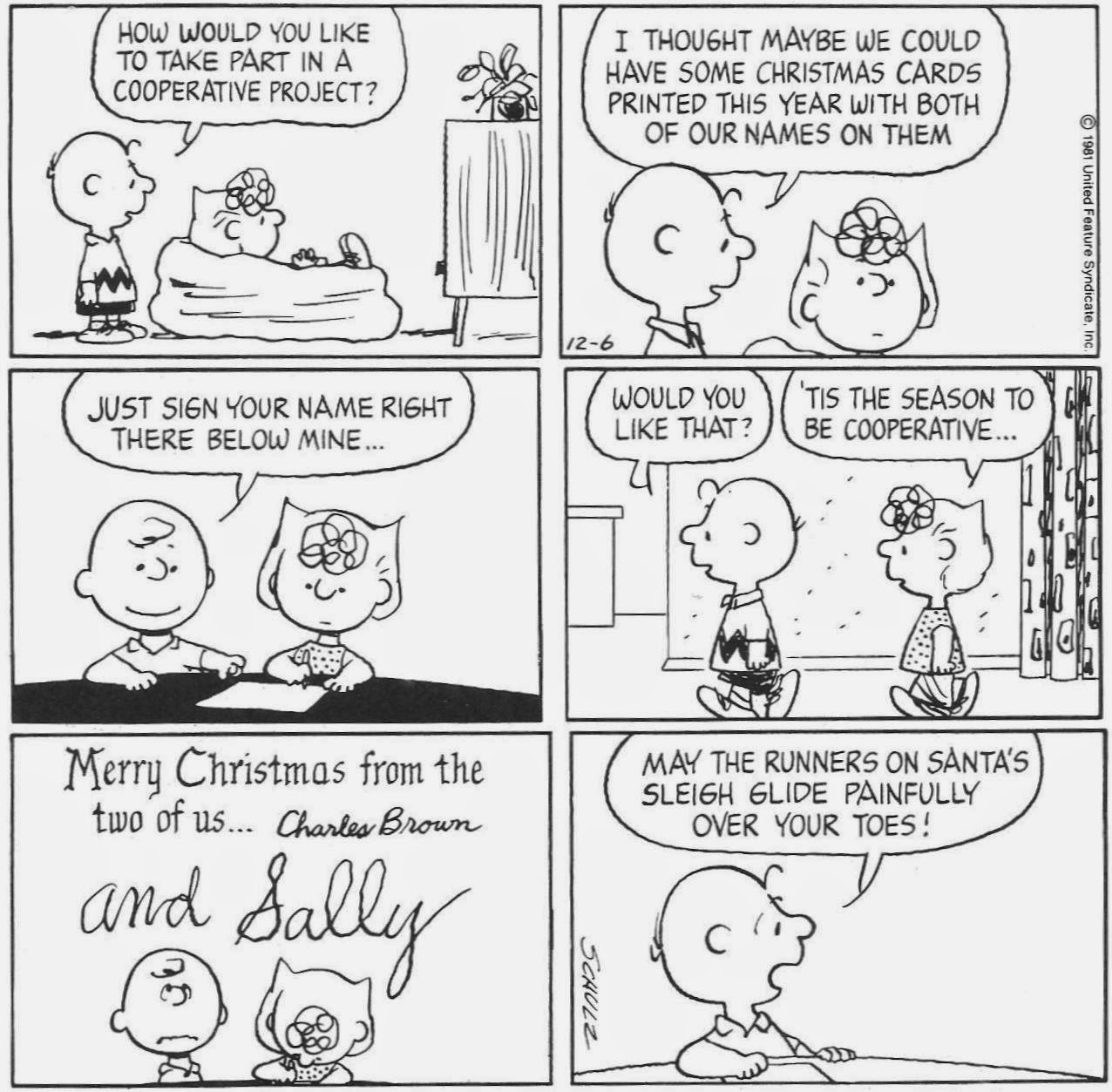 For this last one, Charlie Brown is pointing down exactly to the next panel.  These comics only make sense if seen in a strange zig-zag pattern that's at odds with the other comics in the book.

The modern-day equivalent to such reprinting mistakes would be having pages switched around or showing up multiple times in the same book, all of which I've seen in various publications, which for a long time was one of the main arguments against having trade paperbacks of comics, since they would be radically different from their "better" pamphlet format.  Things have considerably improved since then, but mistakes still abounded.

Domu was one of the earliest Mangas I ever saw in French, and I started off with the last third, which was quite a traumatic experience.  It was one of the scariest things I'd ever seen.  There was so much death and destruction involved.  I had absolutely no idea who all these people were, and why they were dying left and right.  At the time, I thought that Cho was a boy who'd aged overnight after facing off the assault from Etsuko's rampage. 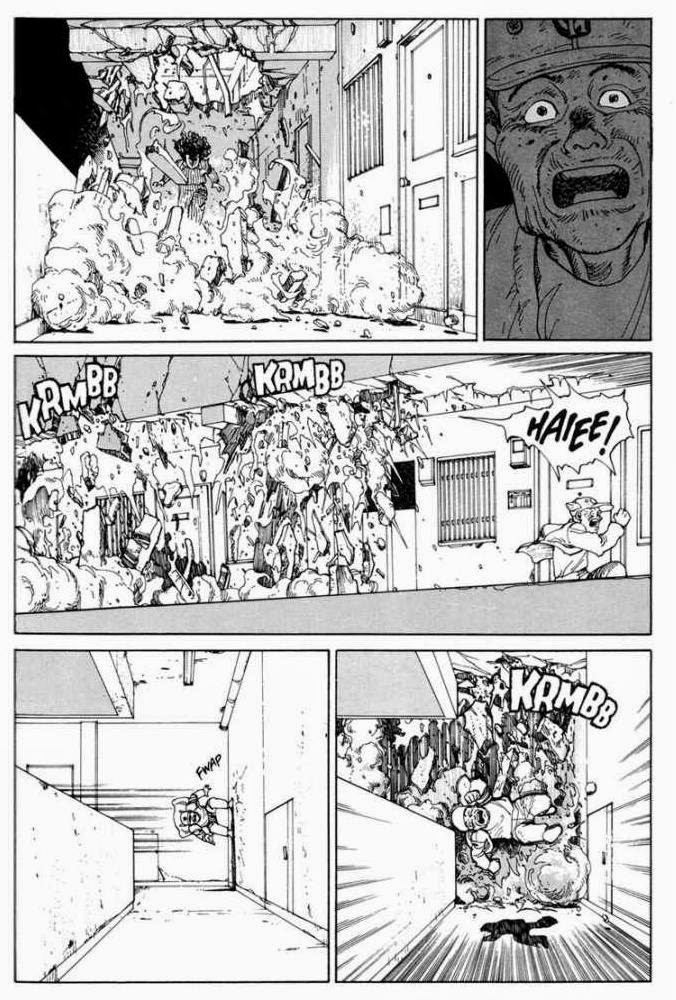 The Dark Horse English version helped clear things up, but there were a few pages that bothered me.  In the 3rd issue, the police interview with the press had the pages on opposite sides.  But more than that, I felt that the rearranging of some panels felt slightly off.

If you've read Telophase's essays on Manga page layout (and you should) you'll remember that there was a section on making the eye flow easily rather than forcing your vision to go all the way from left to right, and back again, but in a zig-zag pattern, that unlike the Peanuts comics above, was more intuitive.

Now, here's that same scene of destruction as above.  I couldn't find the same book I saw years ago, and am not going through the trouble of flipping the text, but see how much smoothly it handles. 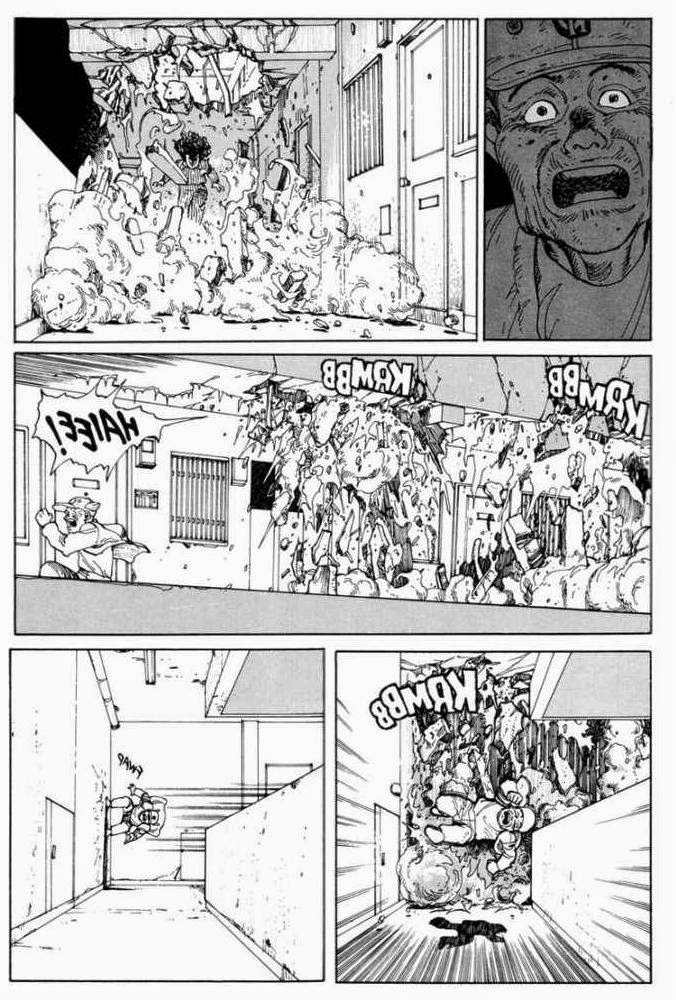 If that's not enough proof, check out this scene of collateral damage in the mostly silent anti-climax climax, where Etsuko is conducting a final psychic assault that's just barely glimpsed at. 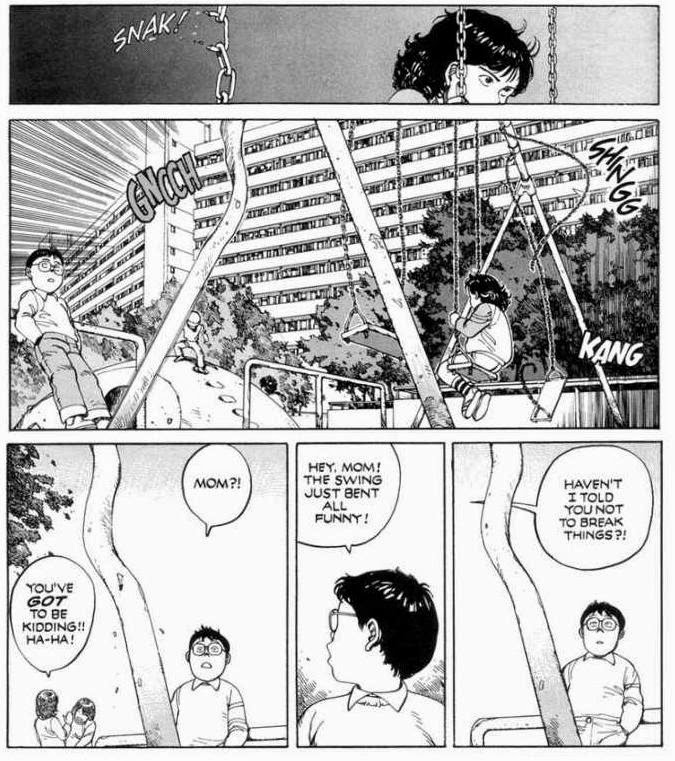 And the slightly modified version: 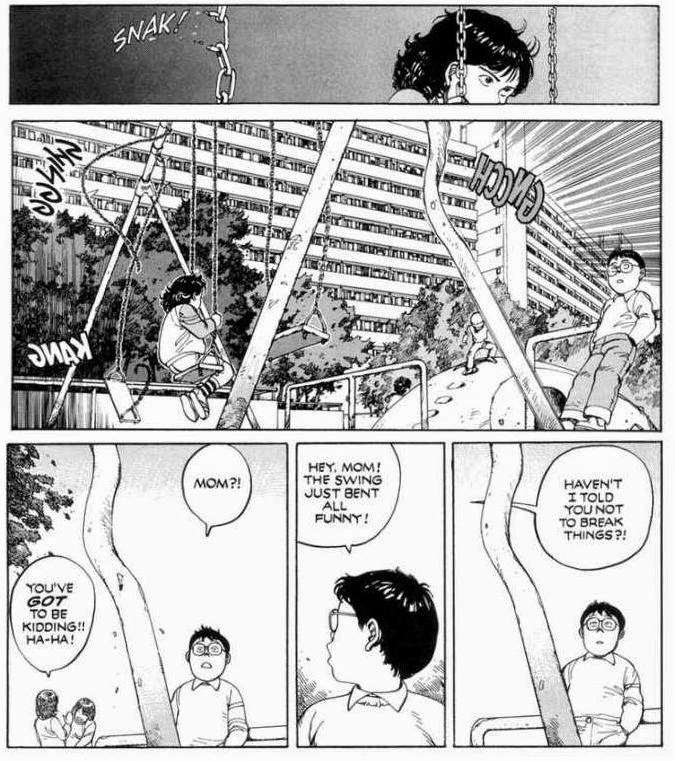 Not only does the position of the broken chain make more sense, the bent beam is also more consistent.  Somehow, the proofreader for Blade of the Immortal got their wires crossed and forgot to correct a flipped panel.

If I hadn't already known about these comics beforehand, I would've been more upset.  But when it comes to reprinting something that the rest of the world doesn't already know, the result can only lead to further confusion.

Krazy Kat is generally regarded as one of the finest (if inexplicable) comics, and the reprinting project was especially challenging, since there were so few reliable collections available.  So when the first strip of 1933 was presented, it left the impression that there was some hidden underlying message lost on readers not sophisticated or smart enough to figure out.  As a result, no one dared point out that there was something in the sequence of events that didn't make sense, lest they appear foolish, even if it would've allayed some general suspicion. 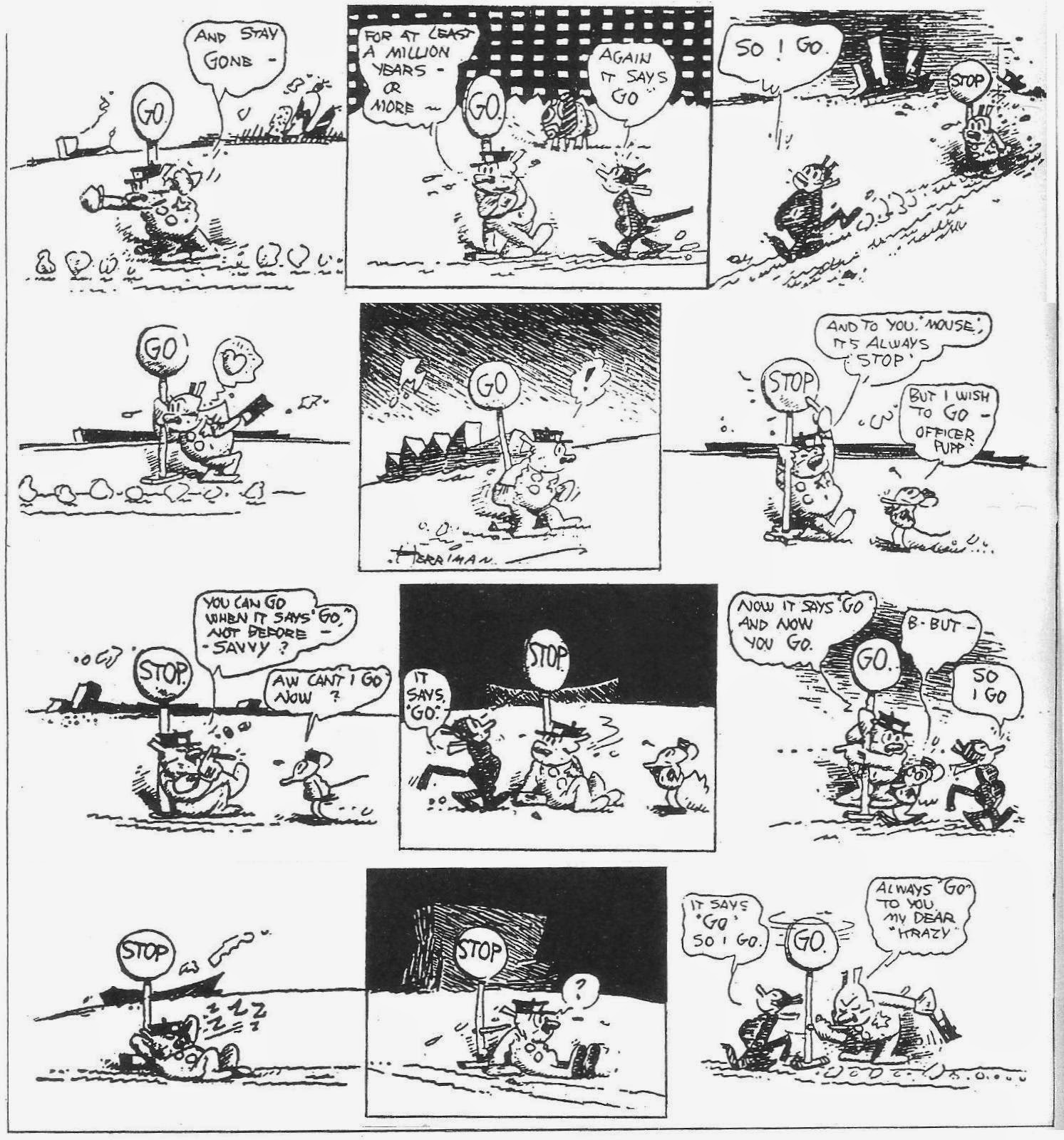 If it weren't for the generous contribution of a German Krazy Kat fan named Erich Brandmayr, the resulting comic would've gone completely unnoticed. 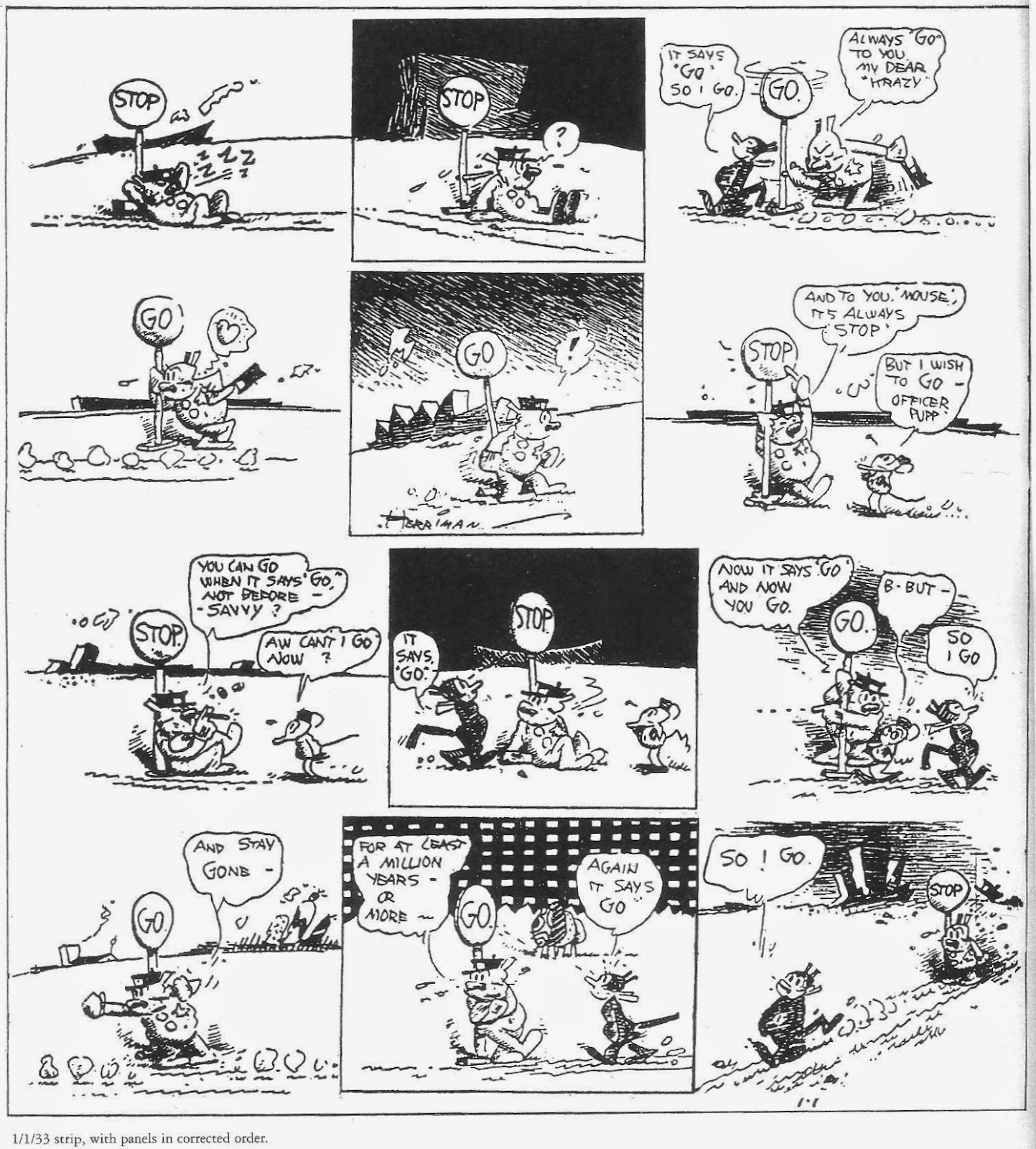 This wasn't Fantagraphics' only reprinting mistake.  The first album of Popeye the Sailor Man had
Even more annoyingly - the panels in question are numbered, so catching this mistake should've been obvious when putting it together. 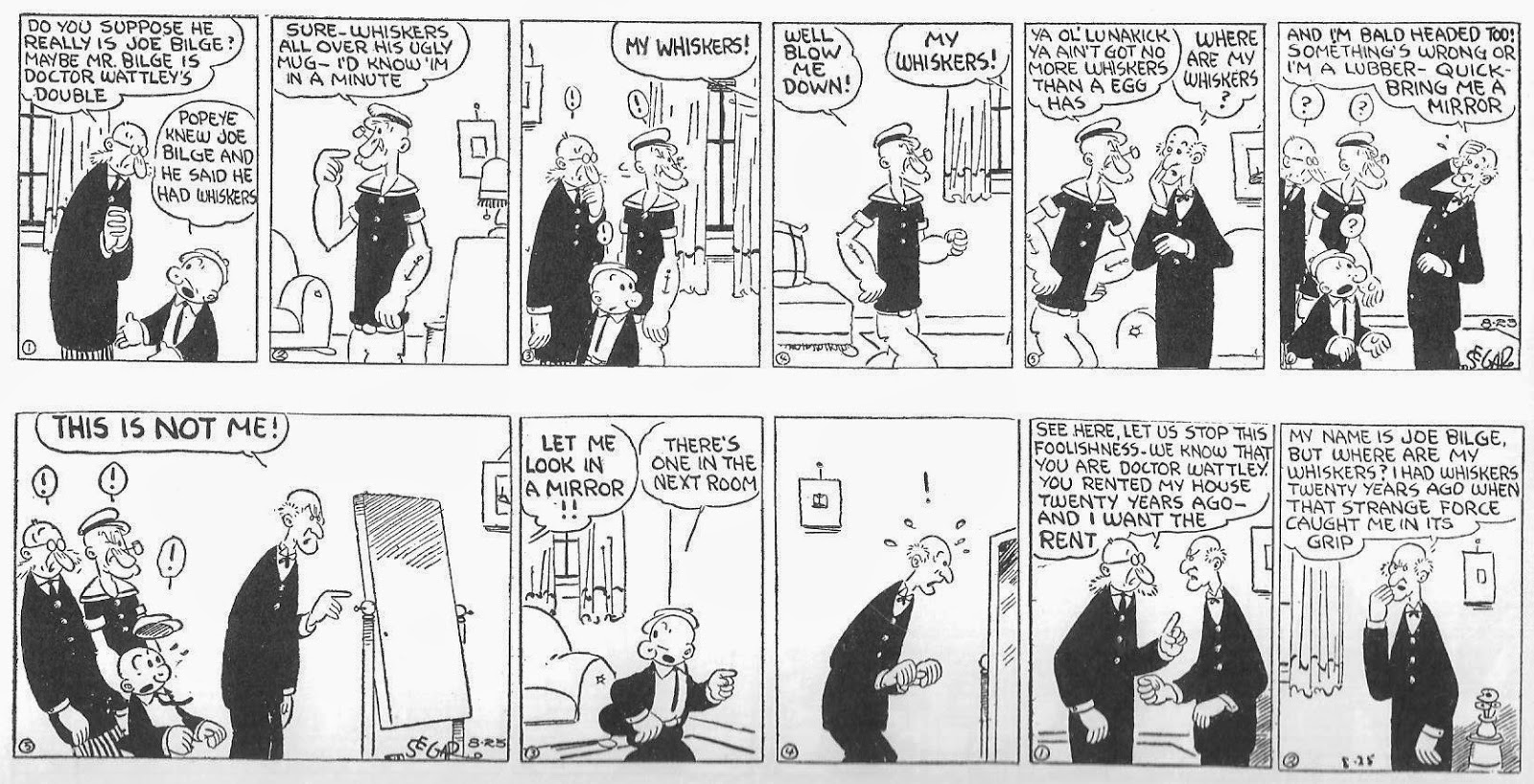 At first glance, the two strips in question seem to be perfectly natural, but the lack of recapping right from the start should've been a tip-off.  Since daily comics tended to refresh the reader's memory every day, reminding them of the events of last time.  When placed all together, the result is something that's 50% rehashing, 50% story, and 50% running jokes.

Cerebus and Akira produced serial stories that when their exploits were collected into telephone books,
their narratives flowed so smoothly without disruption, interruption or recapping - making it almost impossible to find the seams in the works.  A trait that still hasn't been matched with recent comics.  (But there's still time)

At the penultimate reveal in Minds, Cerebus' adversary, Cirin, sees an event in Cerebus' childhood that's of great personal importance and interest to her, 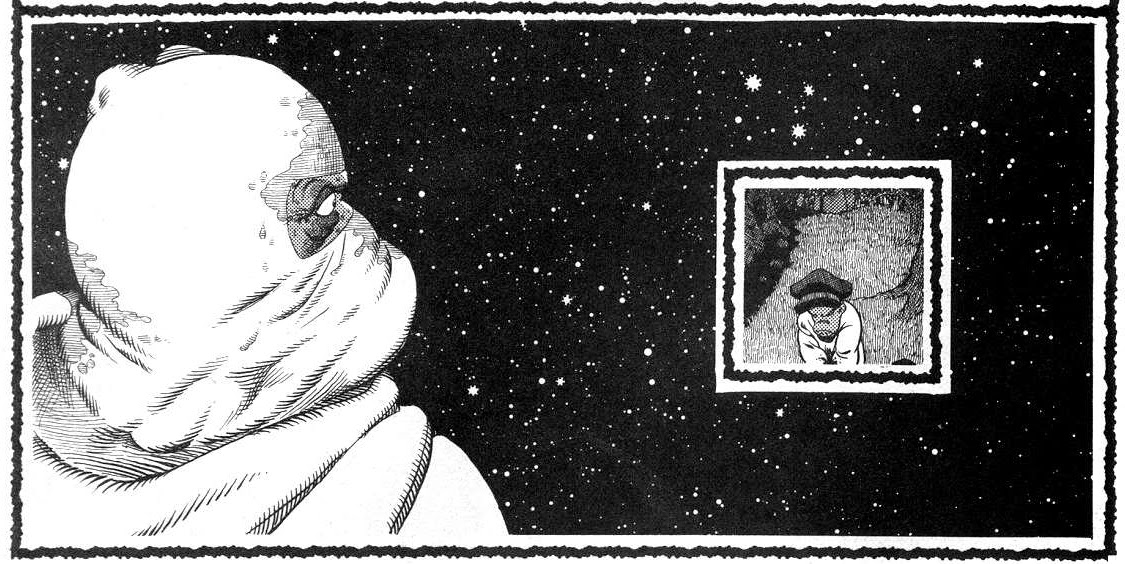 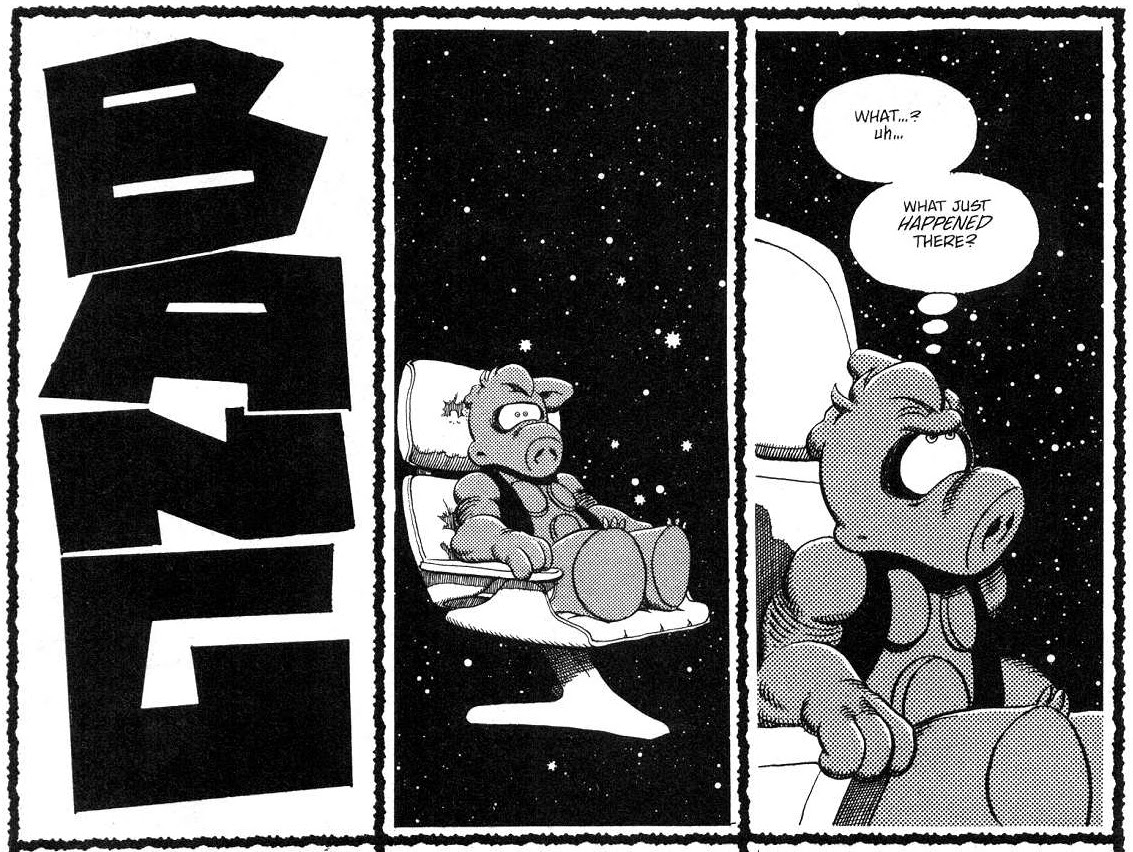 To make matters more infuriating, this interruption only makes sense when it shows up in context later on.  All the dramatic build-up that'd been growing then is gone because a copied page was put in the wrong place.  At first, I thought this was an isolated event, but I saw another book in a second-hand comic store, which had the exact same misprint.  I have no idea if this is an aberration or not, since I can't find any mention of it anywhere.  Doubtless, any new readers who came across this misleading passage must've been grossly confused.

This isn't solely limited to just Newspaper strips and comic books though.  MAD Magazine suffers from this same symptom.  Because the dimensions of the magazine don't conform to the typical size of a comic paperback, some panels wind being out of order.  While this is fine for thematic articles such as "A MAD look at..." where which panels you read don't matter, it plays havoc when certain articles are slap-dashed haphazardly. 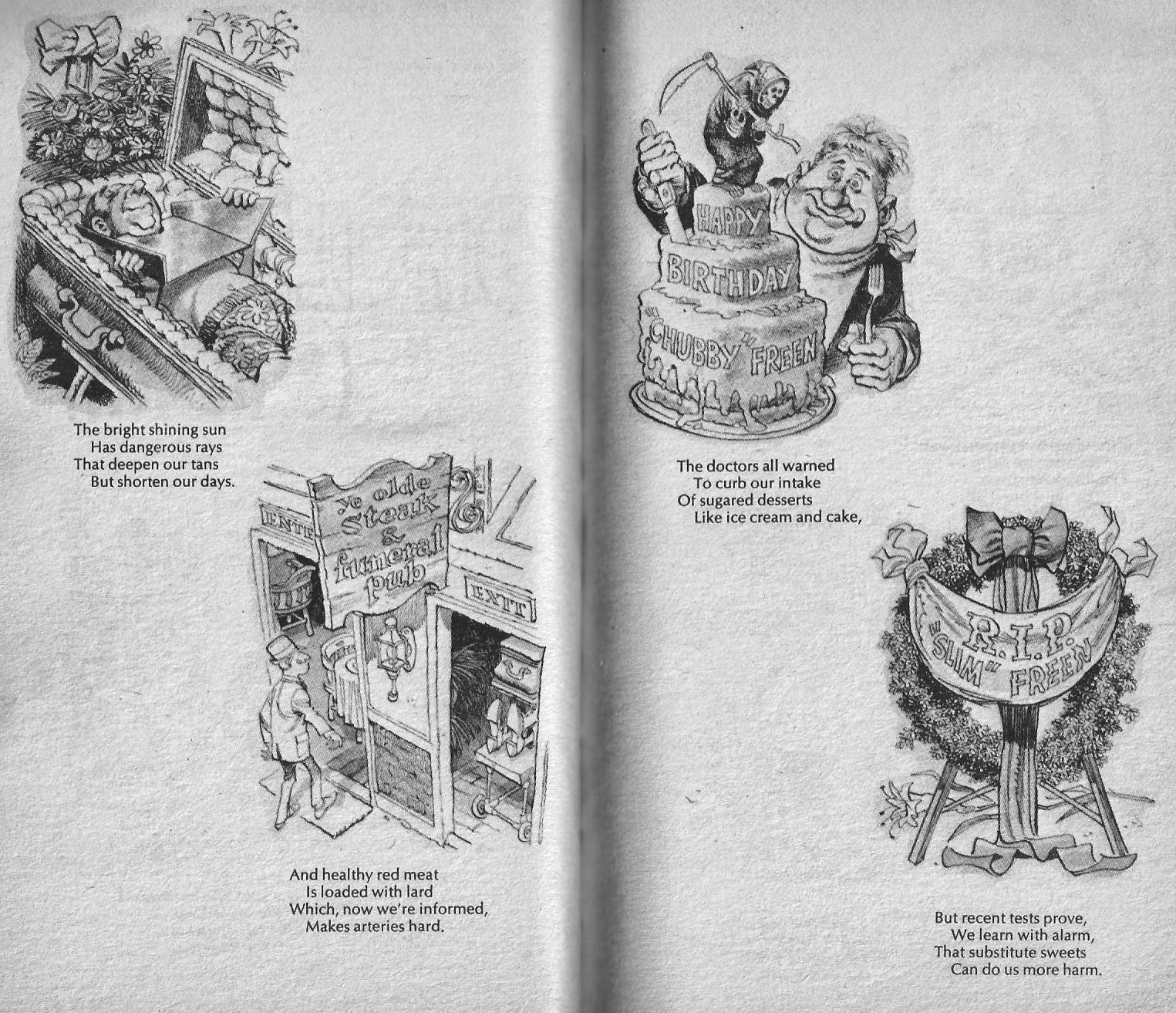 The article The Facts of Life (& Death) is ruined with the last two panels out of sequence: 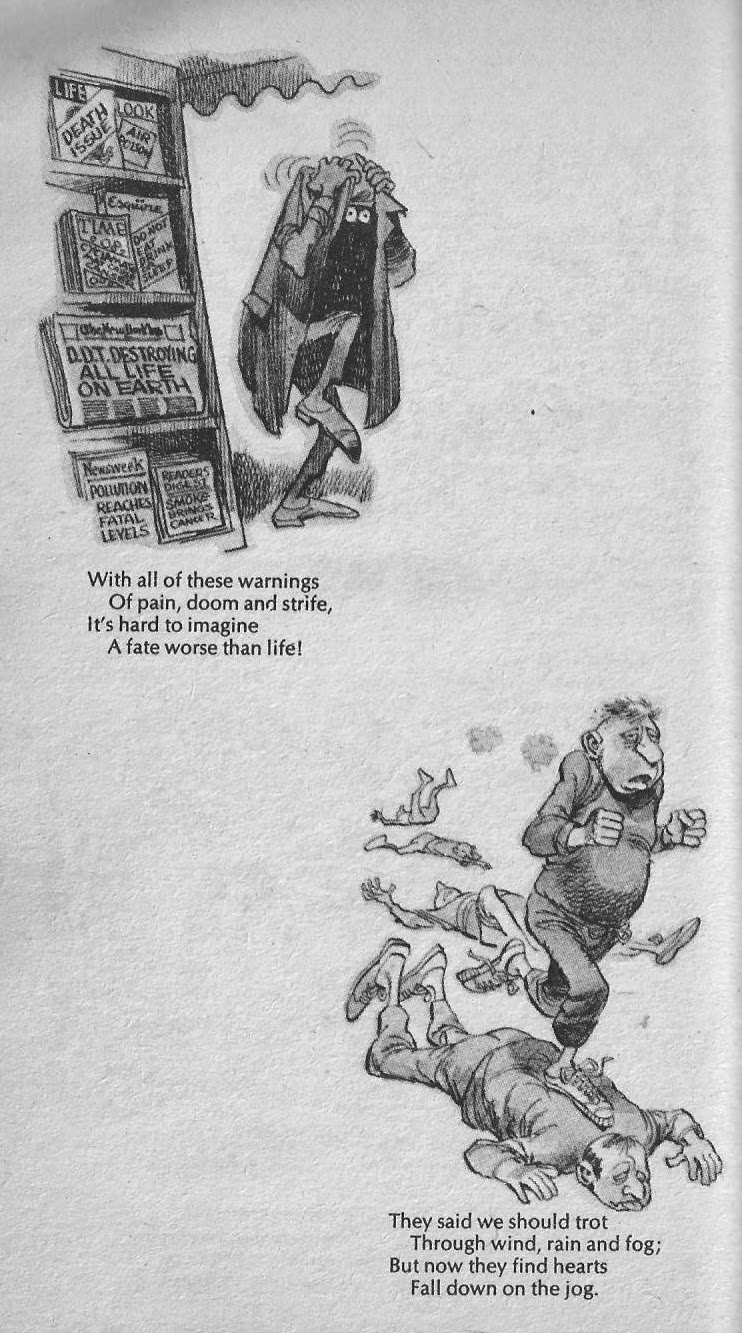 Of all the artists, none was treated more slipshod than the legendary Don Martin. 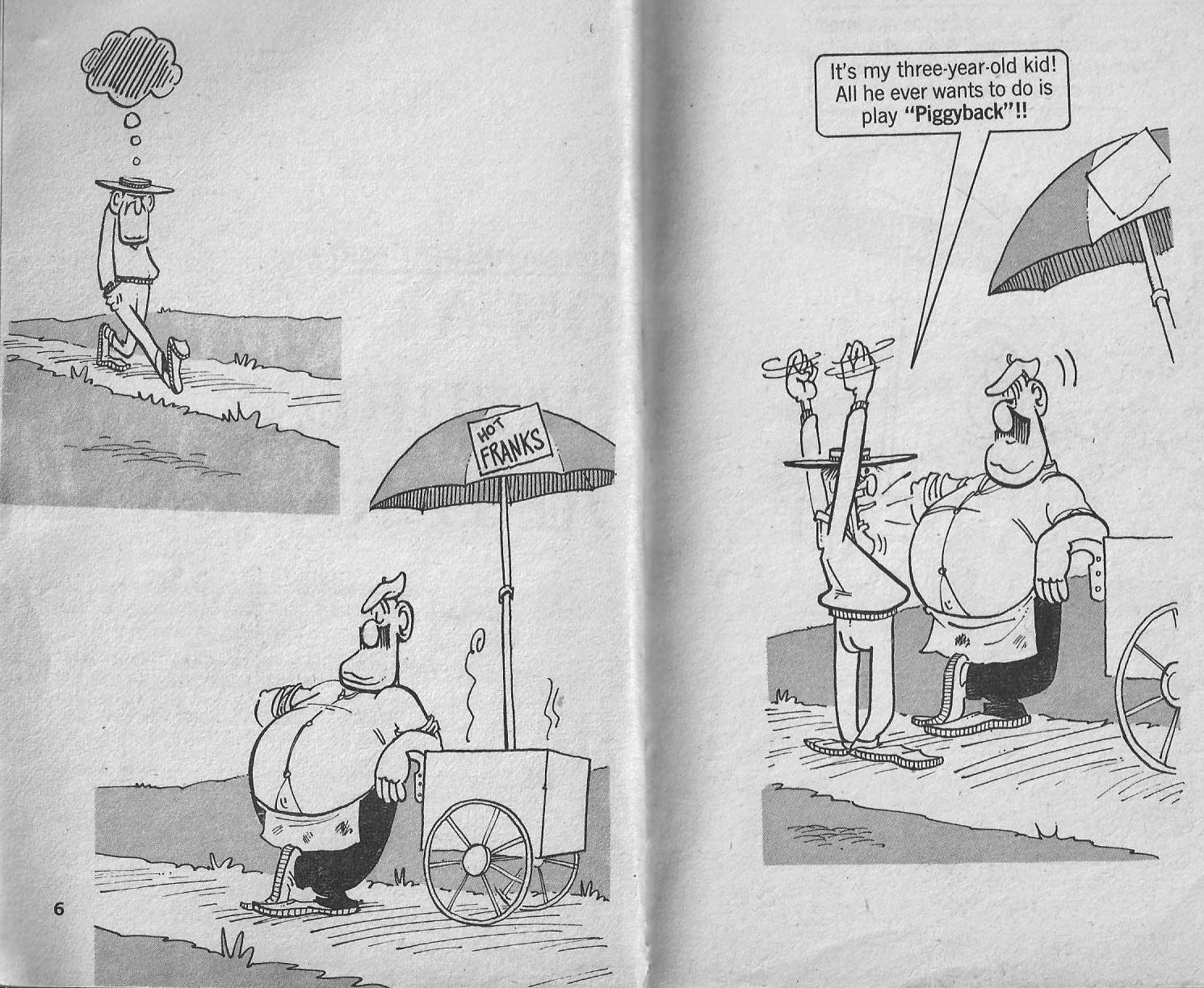 His stories would start out normally enough (or as normal as a Don Martin character gets), and then things start getting weird before the punchline. 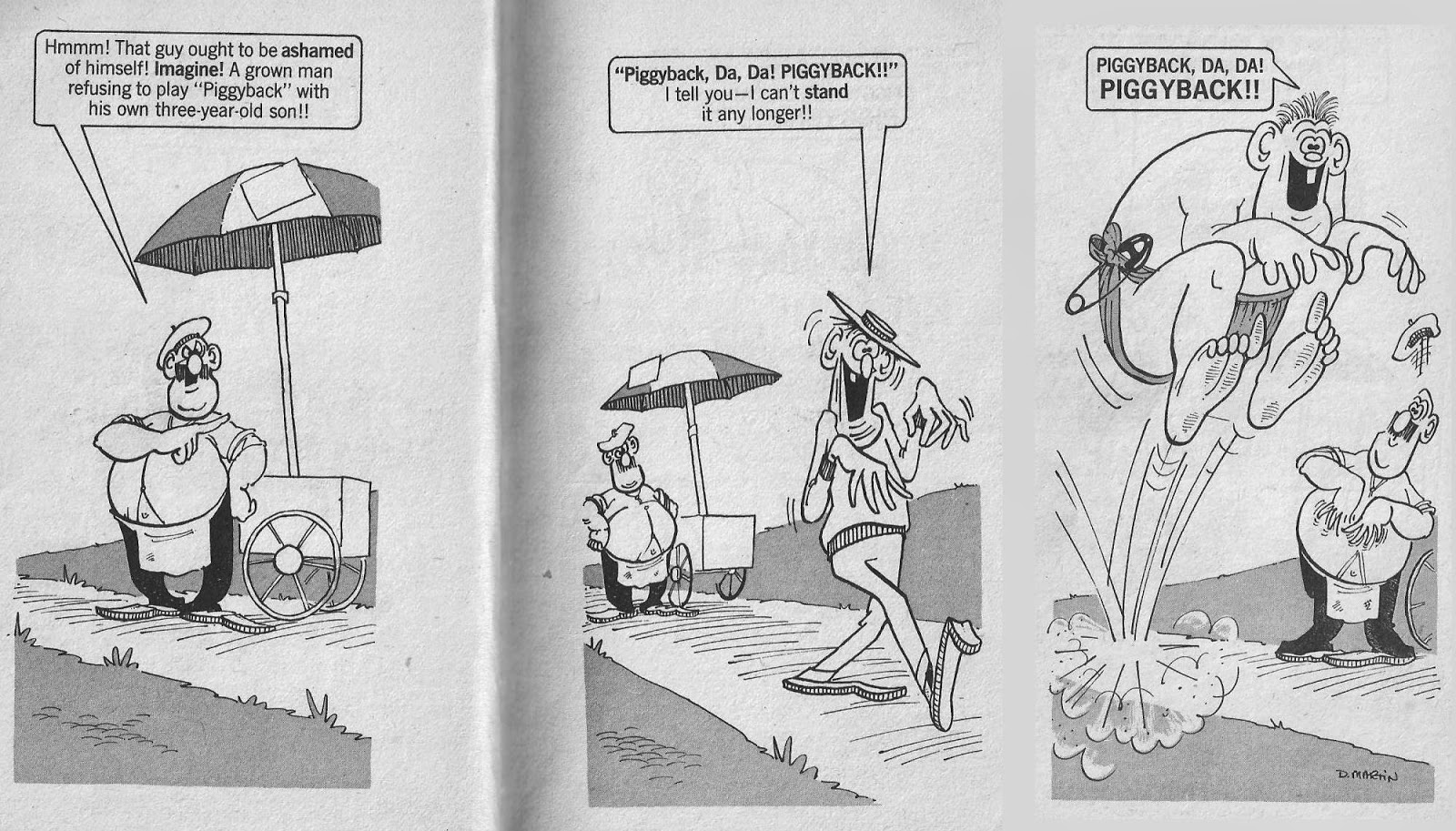 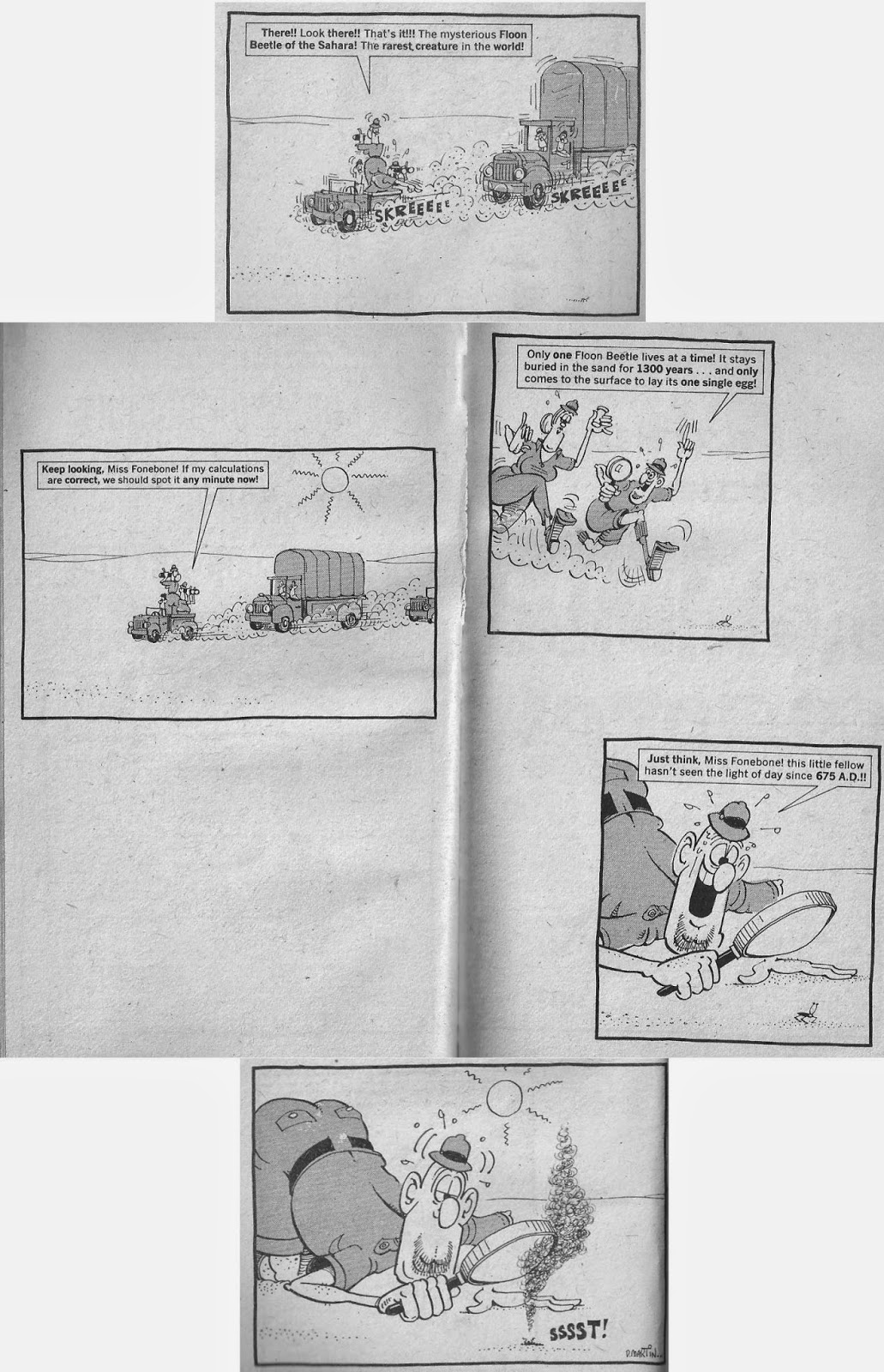 So far, the cut-and-pasters (I don't know what the proper technical term is) seem to have the most trouble in trying to tell when a Don Martin character is walking away. 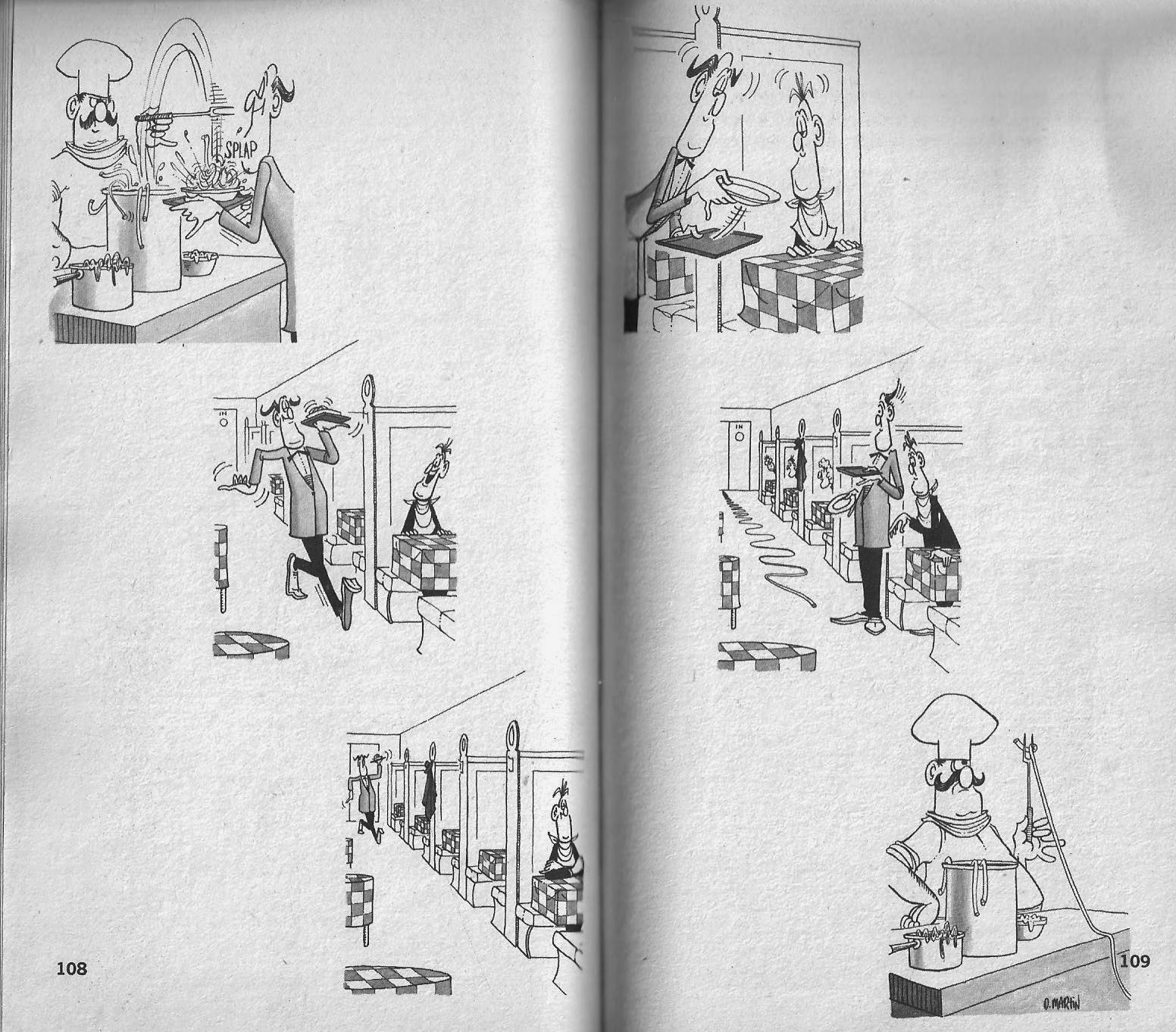 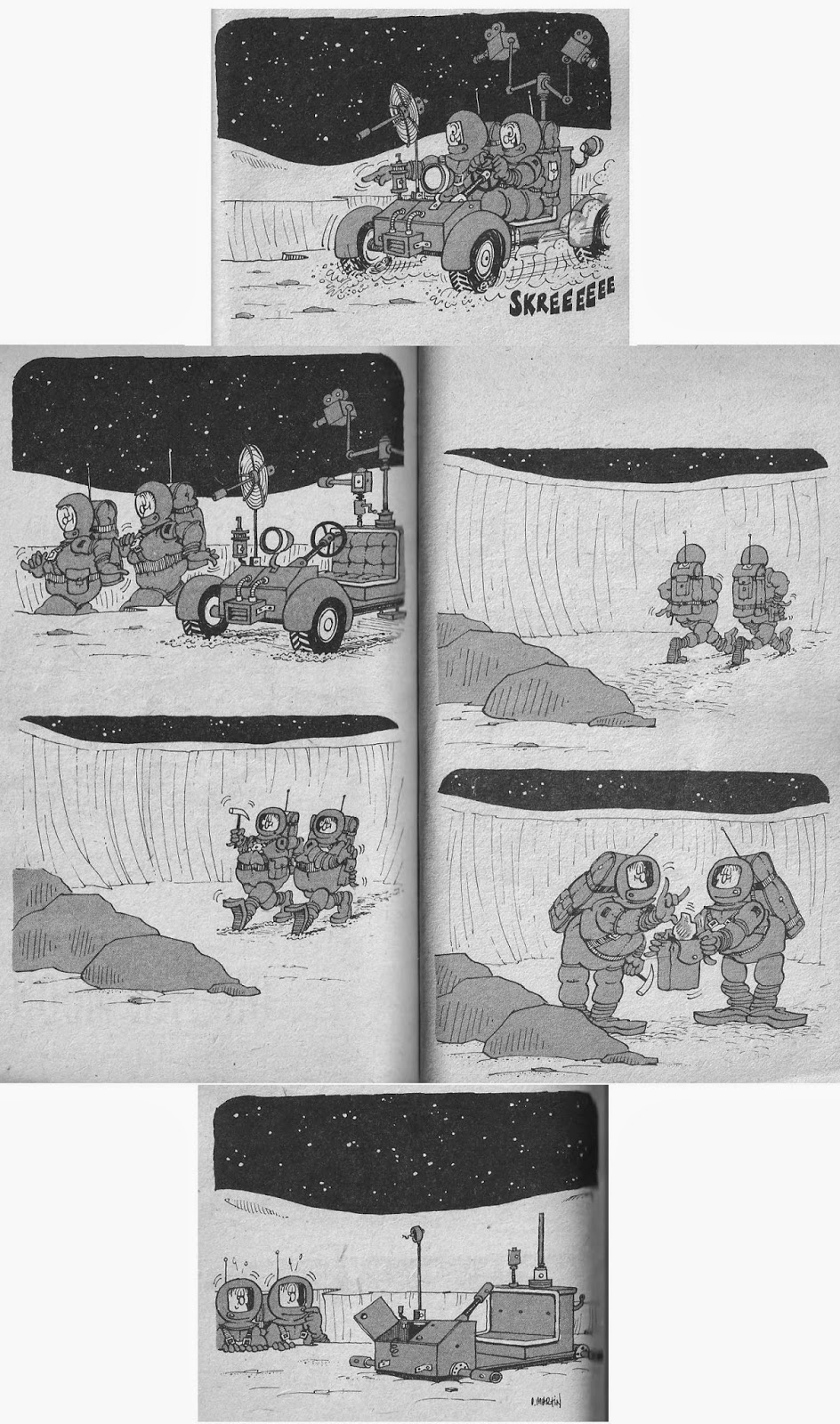 Somewhat fittingly, a Sesame Street parody, Reality Street in a state of reconstruction wound up with this situation, fixing what wasn't broken.  Anybody who's been forced to undergo construction on their street can surely relate. 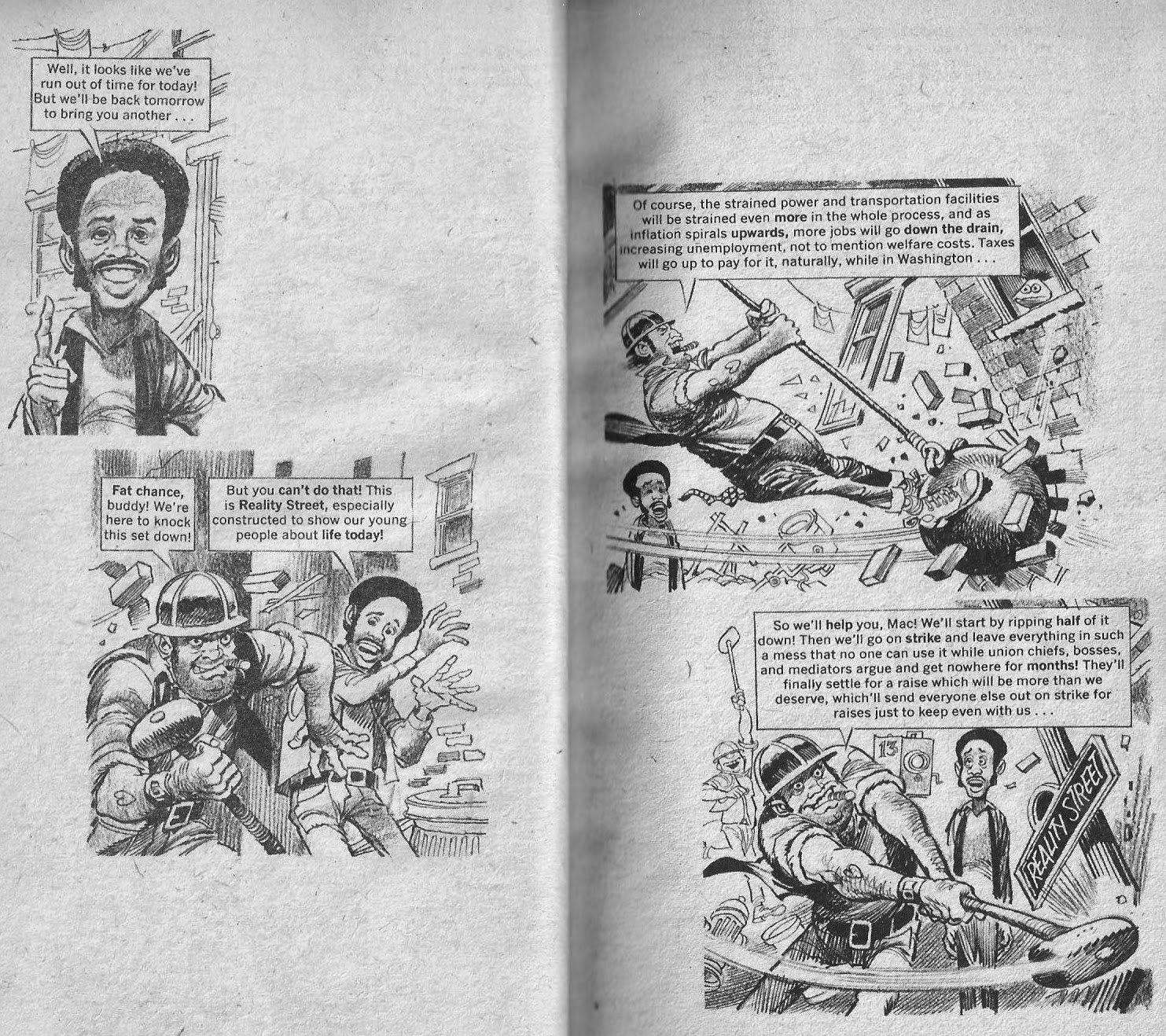 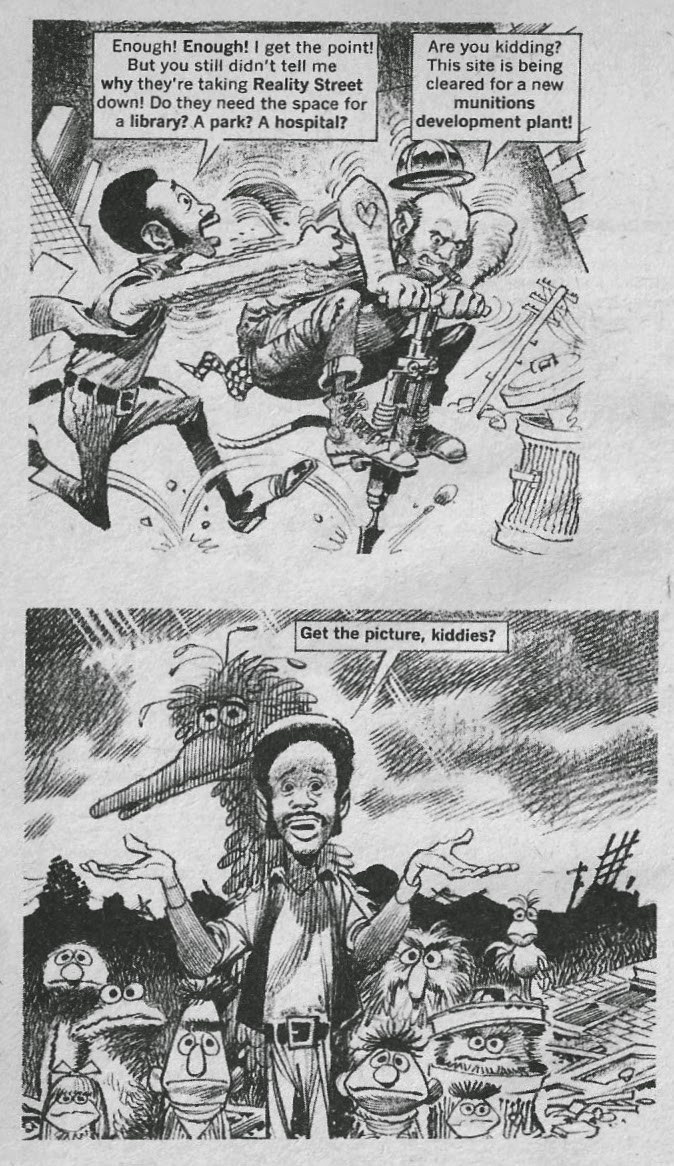 The one singular exception to all this was a Bloom County comic which was rerun from Berkeley Breathed's early days of B.O. (Before Opus).  Here, it looks like Milo is about to leave before Freida figures out the calculation, only to be prevented from doing so.  Ironically, making the penultimate panel the punchline wound up making it personally funnier than if it were left alone. 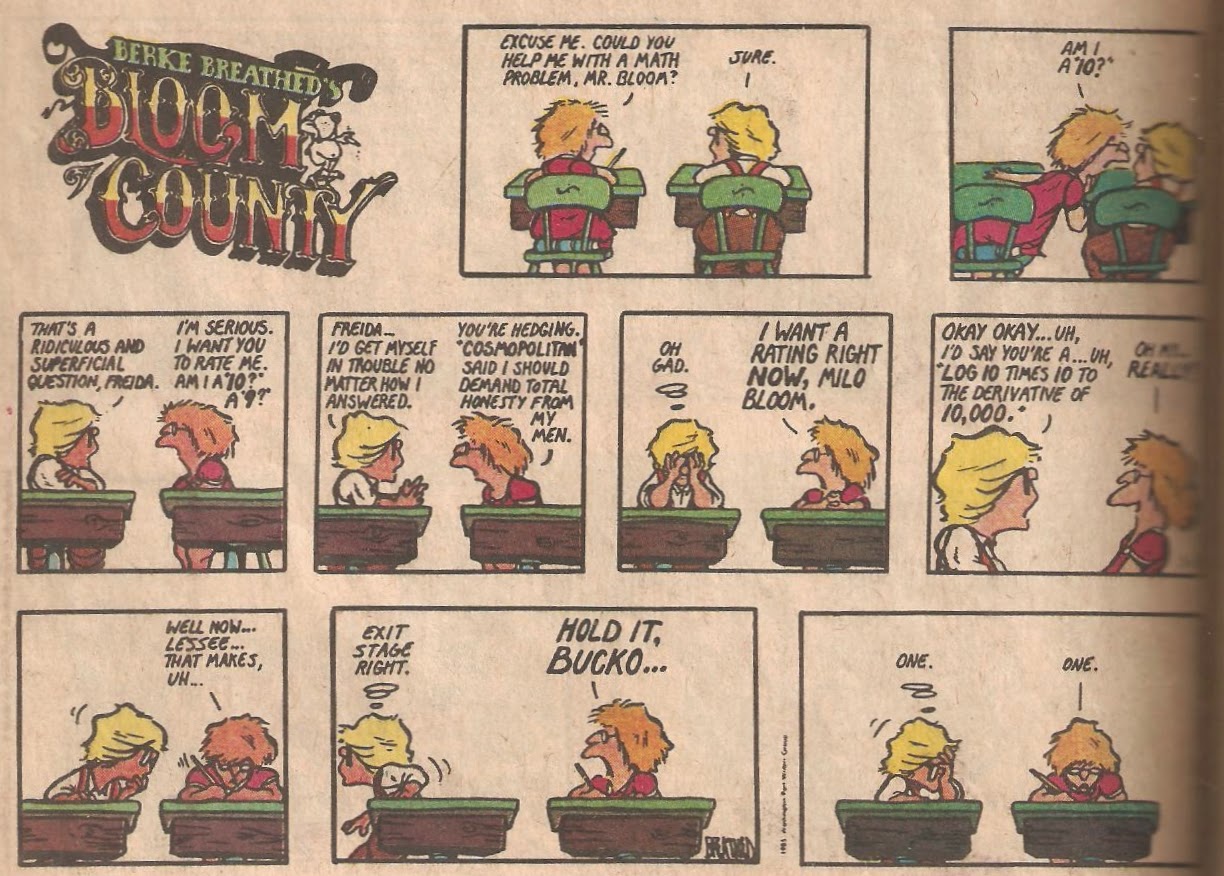