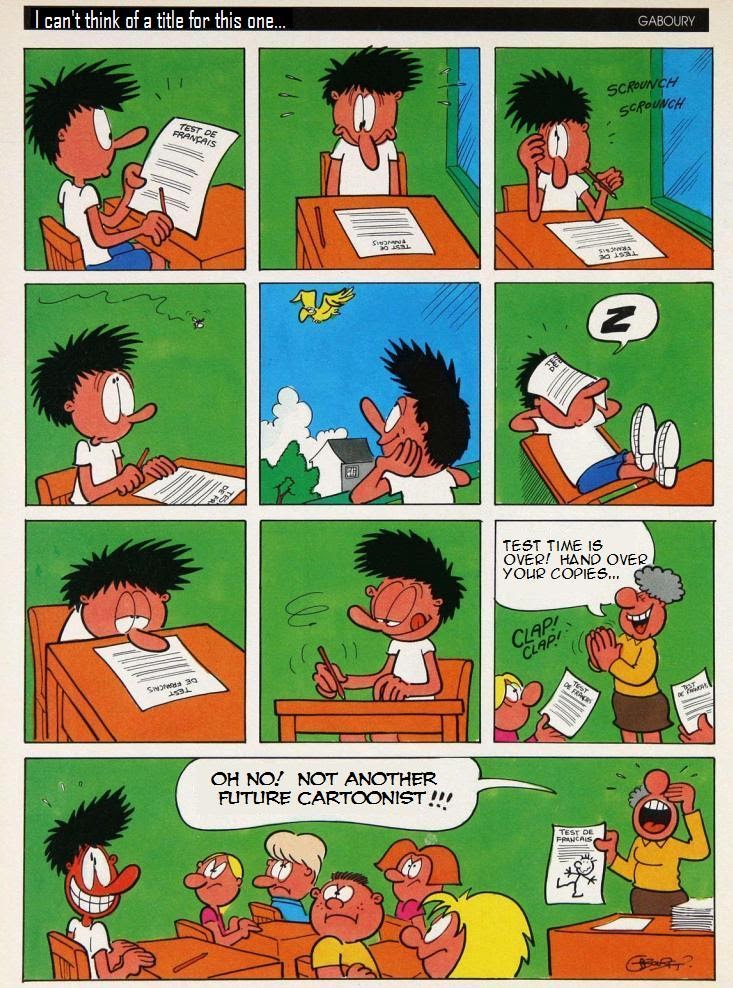 There are artists who strive their whole life in order to be recognized.  There are artists who dabble in doodling and after posting a few funny pictures online, wind up becoming instant social meme generators.  And then there are prolific cartoonists who make multiple contributions while lying under the radar of everybody in their home country.  A prolific creator of gag comics, Gaboury got his start in the pages of CROC, a French humour magazine in the vein of National Lampoon that was "Dangerously Droll".  Many cartoonists got their start by showing their talents in that magazine, who've moved on to new projects including Jacques Goldstyn (Débrouillards) Pierre Fournier and Réal Godbout (Red Ketchup, the upcoming adaption of Kafka's Amerika). 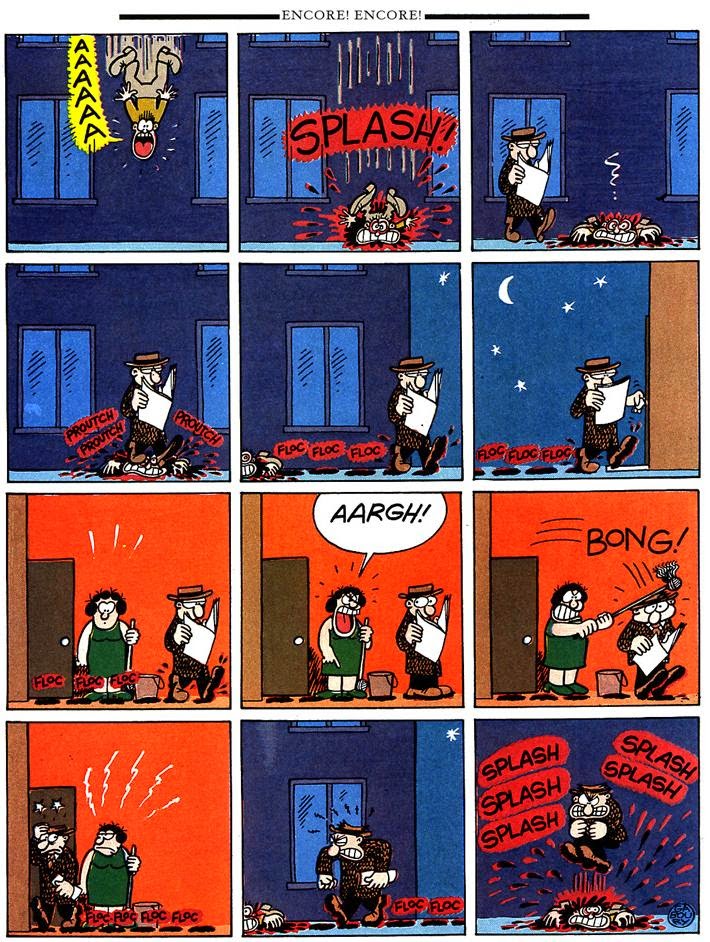 Gaboury has a consistent cartoony style that's a cross between Mordillo and Duck Edwing.  His first comic was used as inspiration for the cover of his first collection, La Vie c'est Mourant (Life is Deathly Funny), though an equally apt title would be How Dare you Die under my Feet.  Indeed, casual bloody violence is a reoccurring theme in his full-page works. 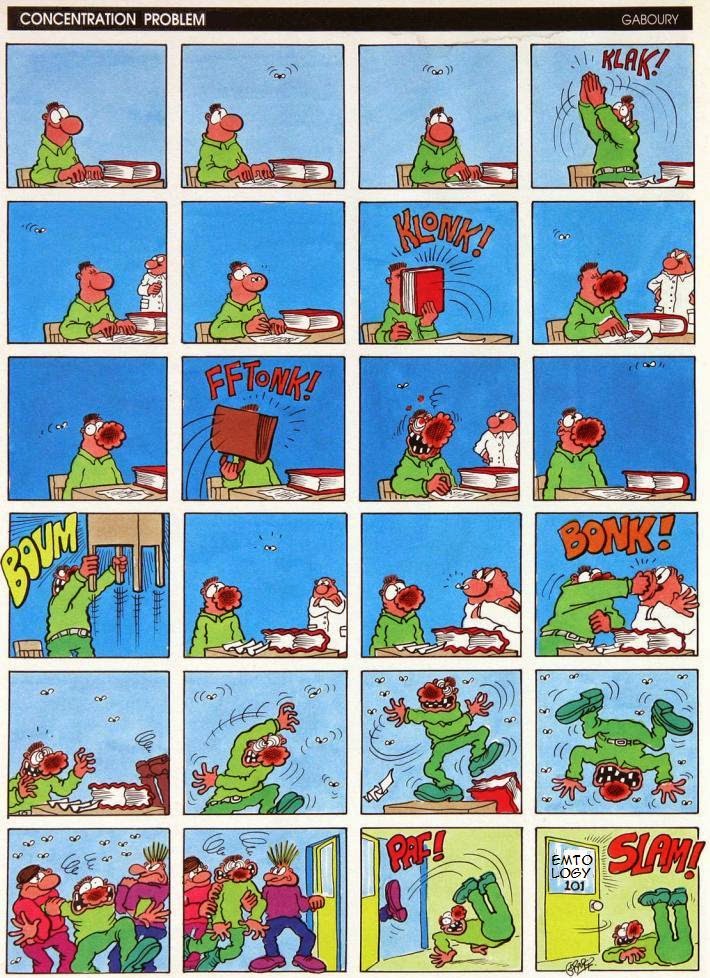 This is actually one of his tamer slapstick comics.  His comics generally follow one of several scenarios: 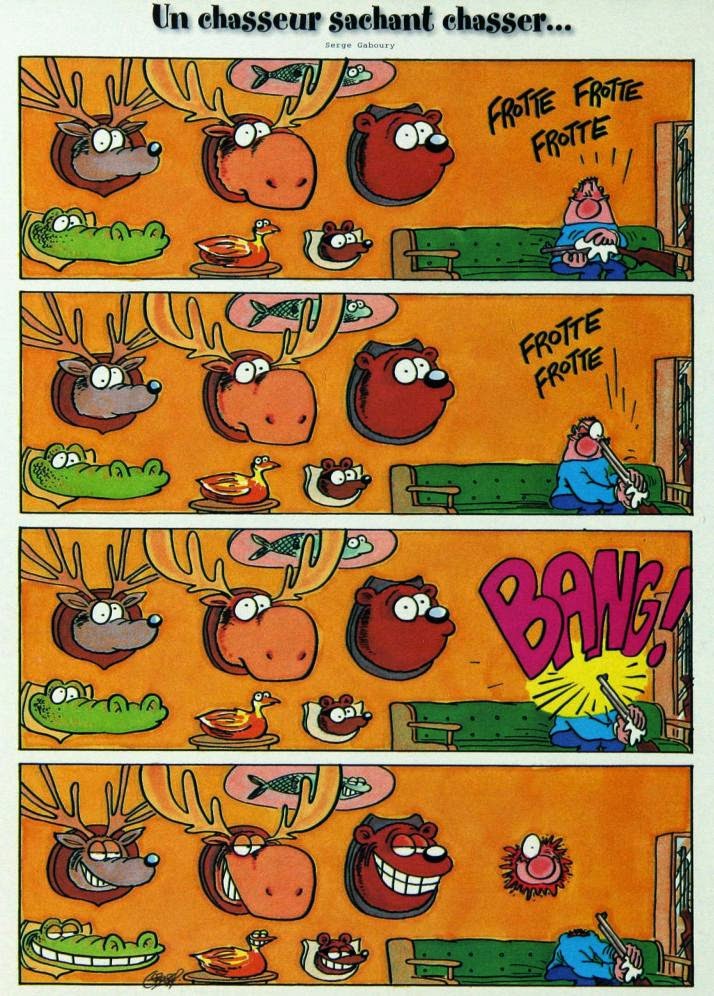 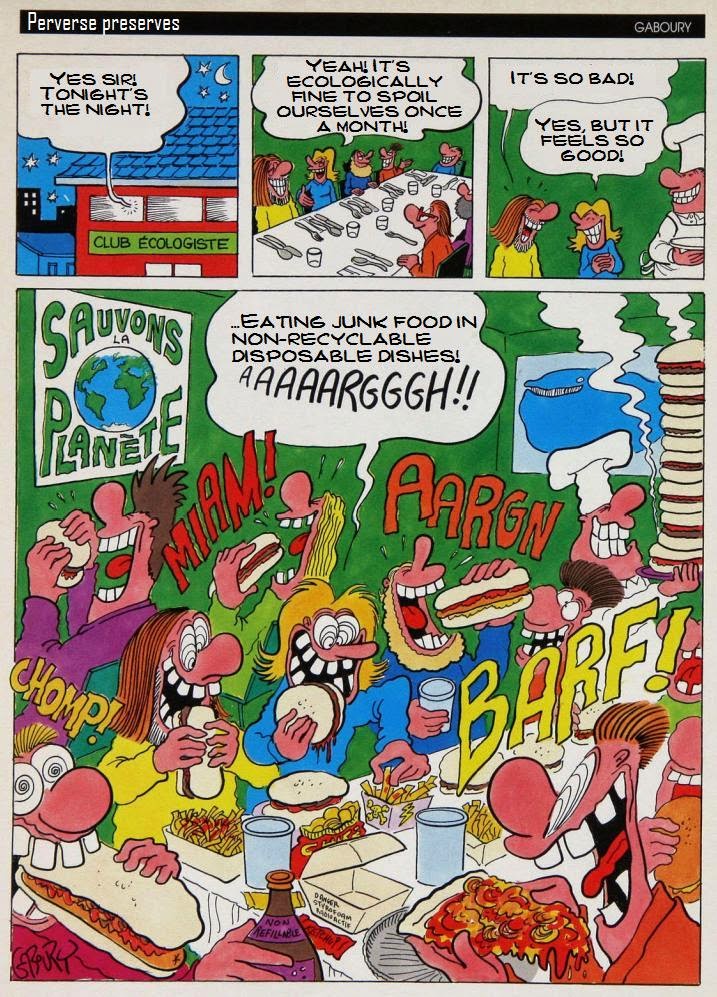 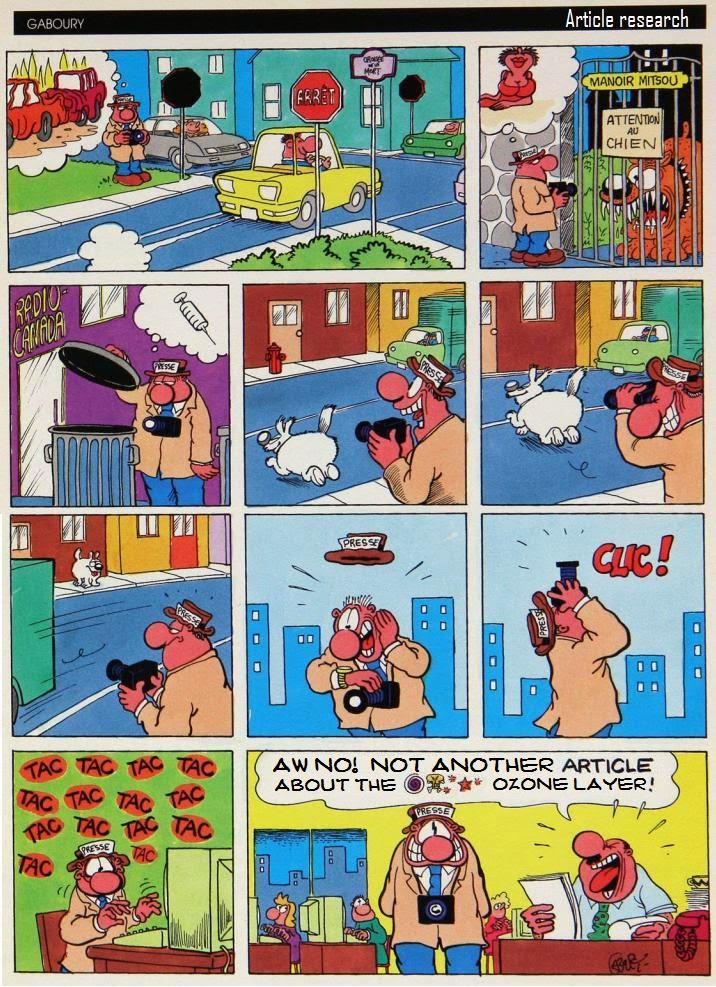 While these are his most dependent formats, he's also prone to drawing comics with multiple panels on a single page.  It's these remarkable feats of engineering that I most think of when thinking of the man, even though the former styles of gag comics are more likely. 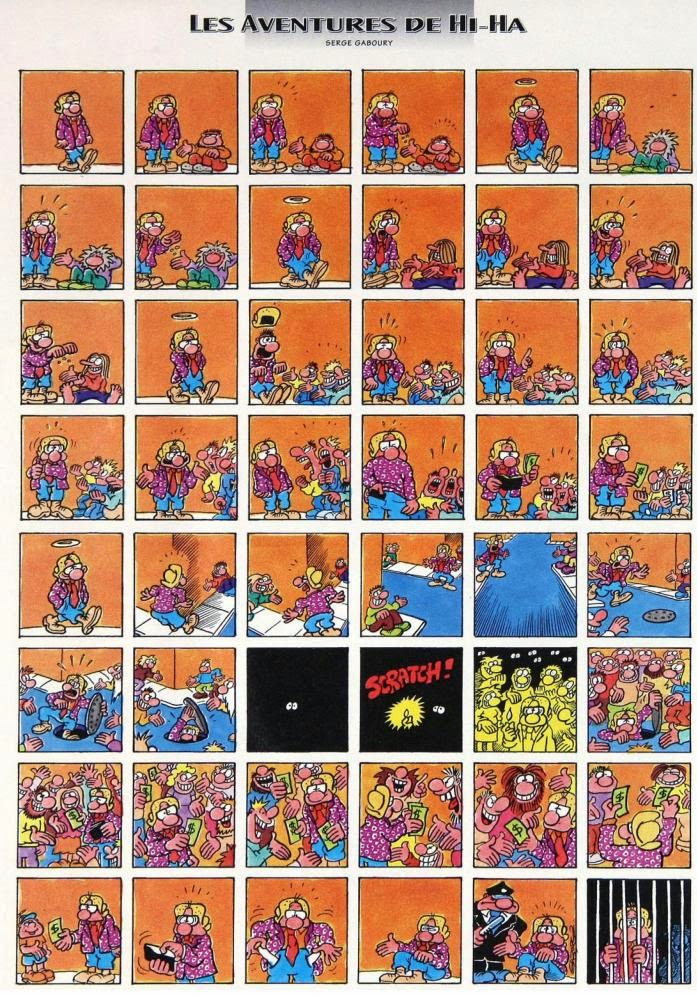 If you look closely, you can see a prisoner begging in the last panel. 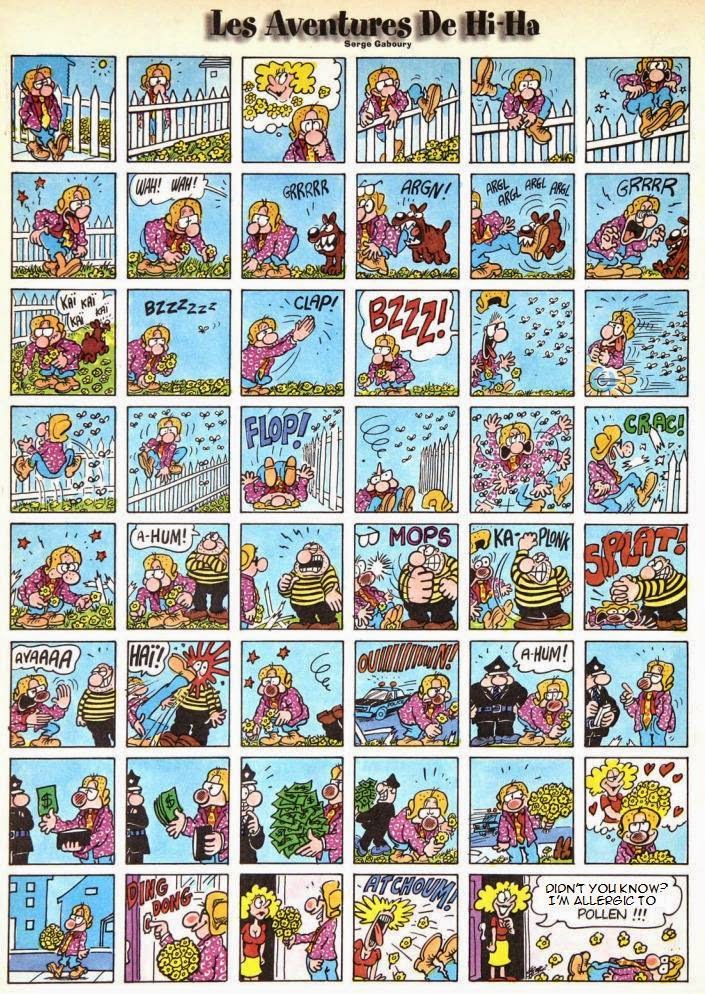 Even more remarkable is when he's able to implement dialogue in these comics, which would be challenging enough to conduct, even with silent panels alone. 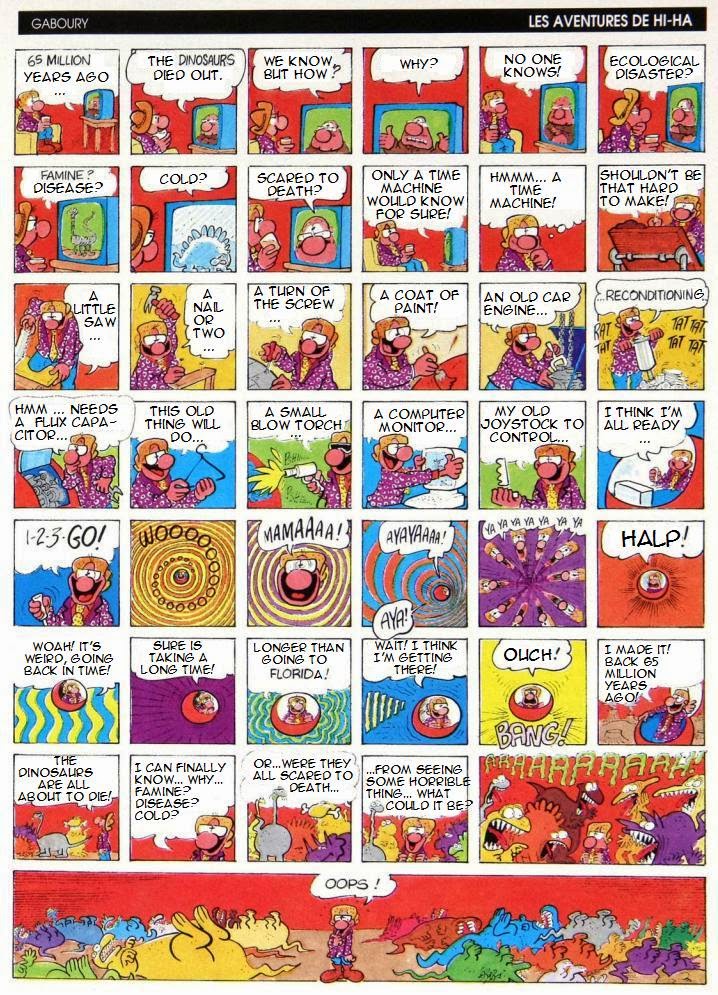 These examples feature Hi-Ha Tremblay, a kind of mascot for CROC Magazine, showing up somewhat late in the magazine's run, similar to Alfred E. Neuman, or Sylvester P. Smythe of Cracked fame.  The difference being that Hi-Ha is based on an actual comedian, Michel Barrette, down to his silly hat and expressions. 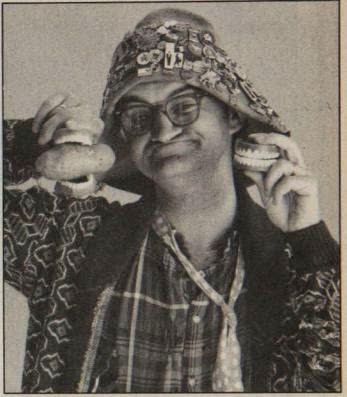 You can practically see the family resemblance.

Although Gaboury's work has shown up in multiple French magazines in Quebec, he's virtually unknown outside of his home province.  The ONLY work of his that's available in English is the collaboration with Brigitte Ostiguy, The Quebecois Book, a handy-dandy guide to Quebec.  Strangely enough, although it's faithful to its source material, there were some items that were in the English version that weren't in the French, and vice-versa, particularly the section about various bars, even though the last selection was already censored in the French book. 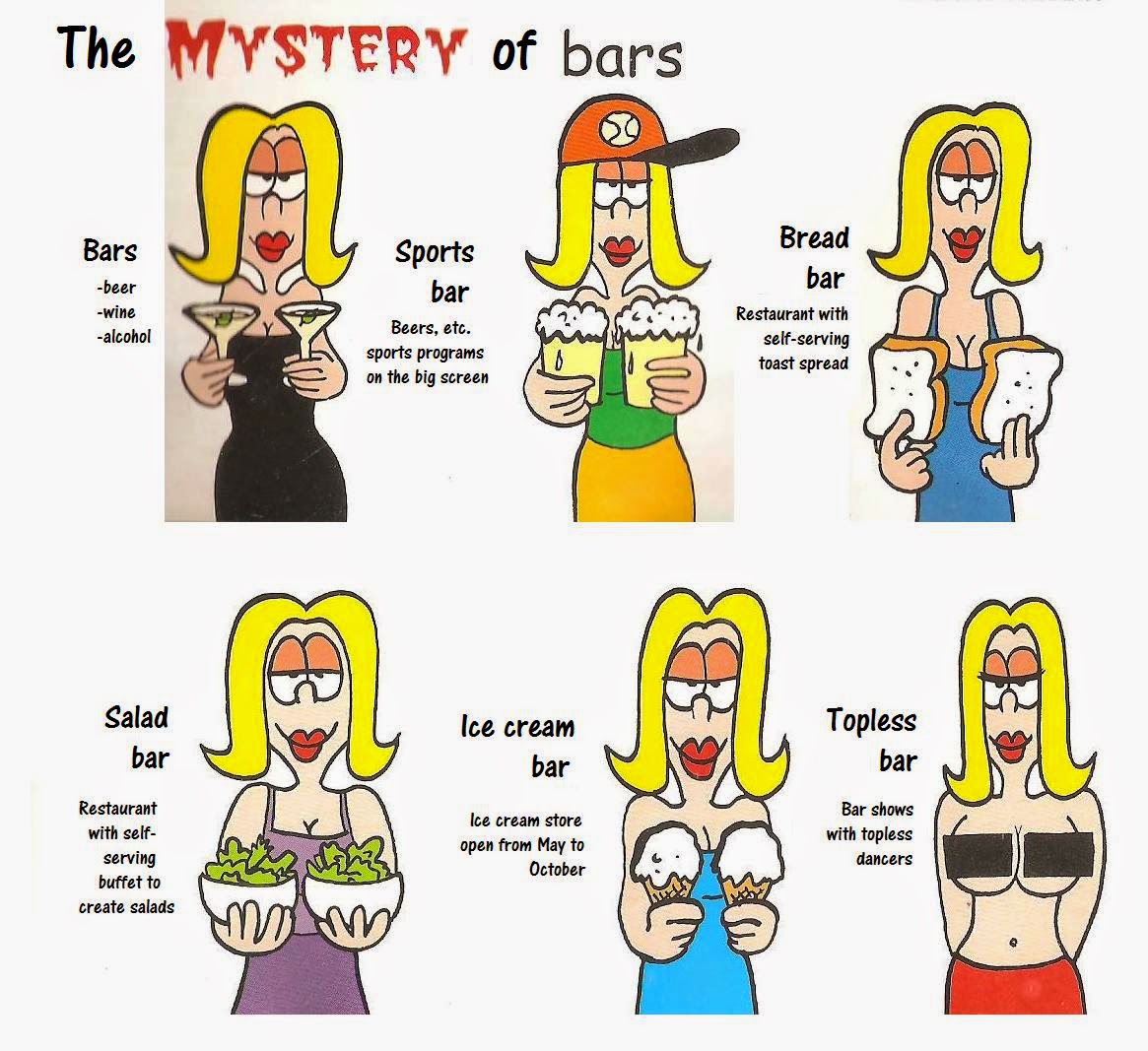 CROC may be gone, but its spiritual successor, Safarir Magazine is pretty much the French equivalent to MAD nowadays.  From the latest movie parodies to various reoccurring comics, it's very similar, and Gaboury does some pages that would bring back fond memories of some pages of MAD; particularly The Lighter Side of..., which hasn't quite had the same level of success with their replacements. 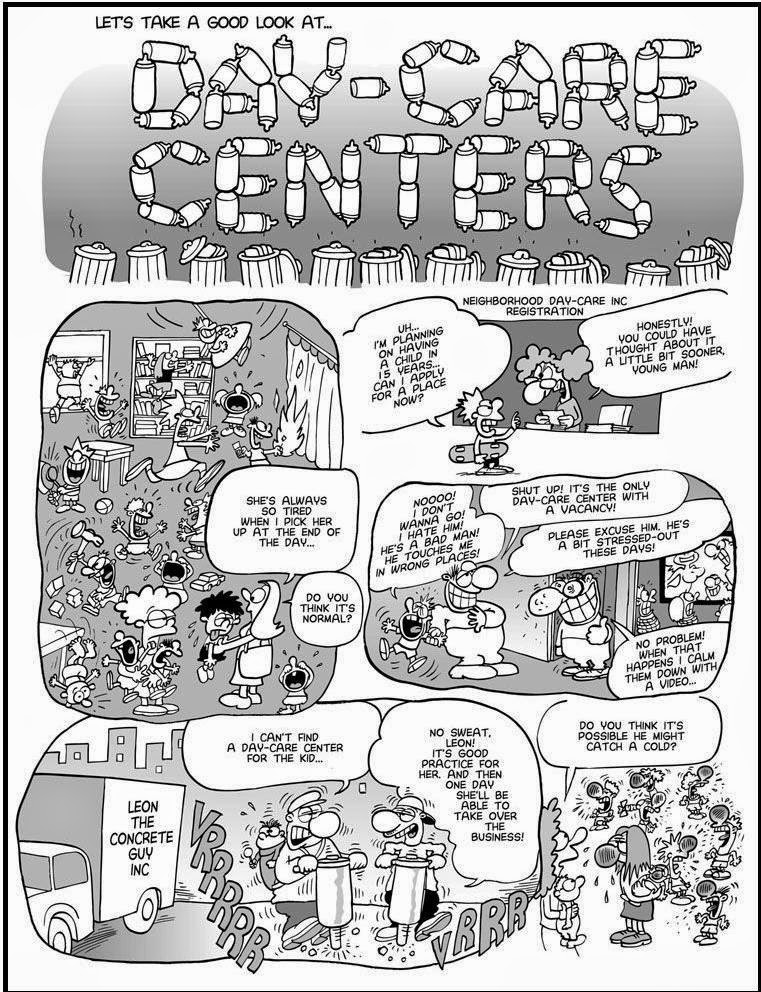 These samples weren't translated by yours truly, but available on Gaboury's English site, which has horrendous loading time, so I've helped spare the pain of waiting to allow you the chance to see his work firsthand. 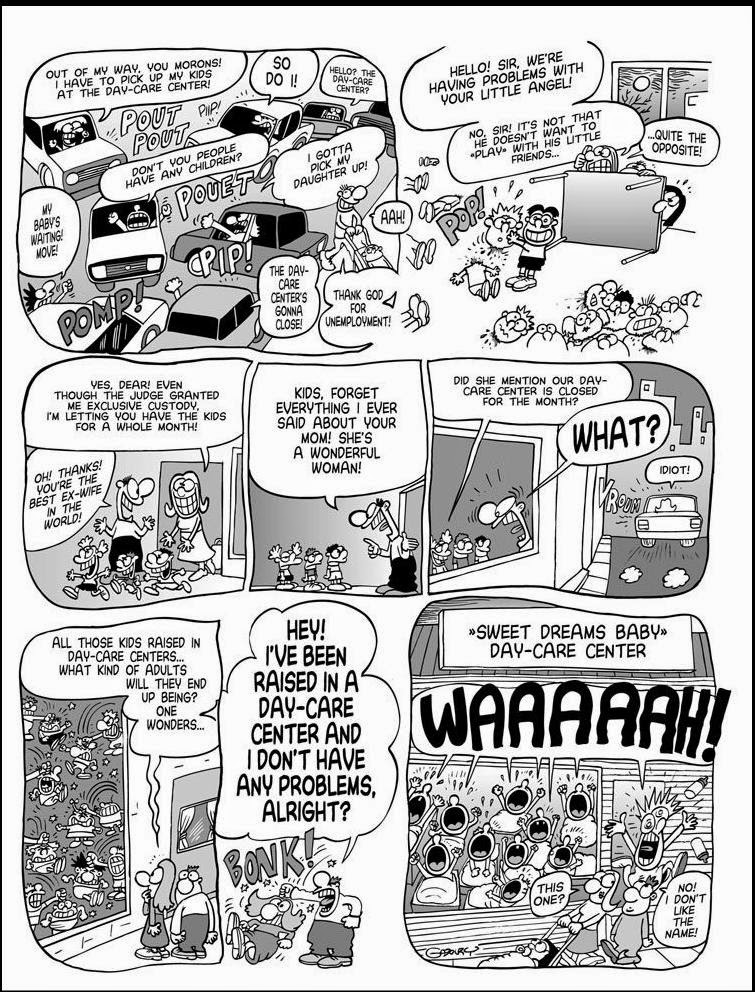 If anyone were to do a full compilation of all the work's Gaboury's done, they would be facing a momentous amount of material, much of it problematic.  Some were in colour, some in black and white, and trying to find a consistent colour scheme would have trouble right off the bat.  Secondly, despite his deceptive childish artwork, a fair amount of nudity, as well as casual violence permeates its pages.  Gaboury is not above taking pot shots against authority figures, and quite a few of his comics are aimed at the police. 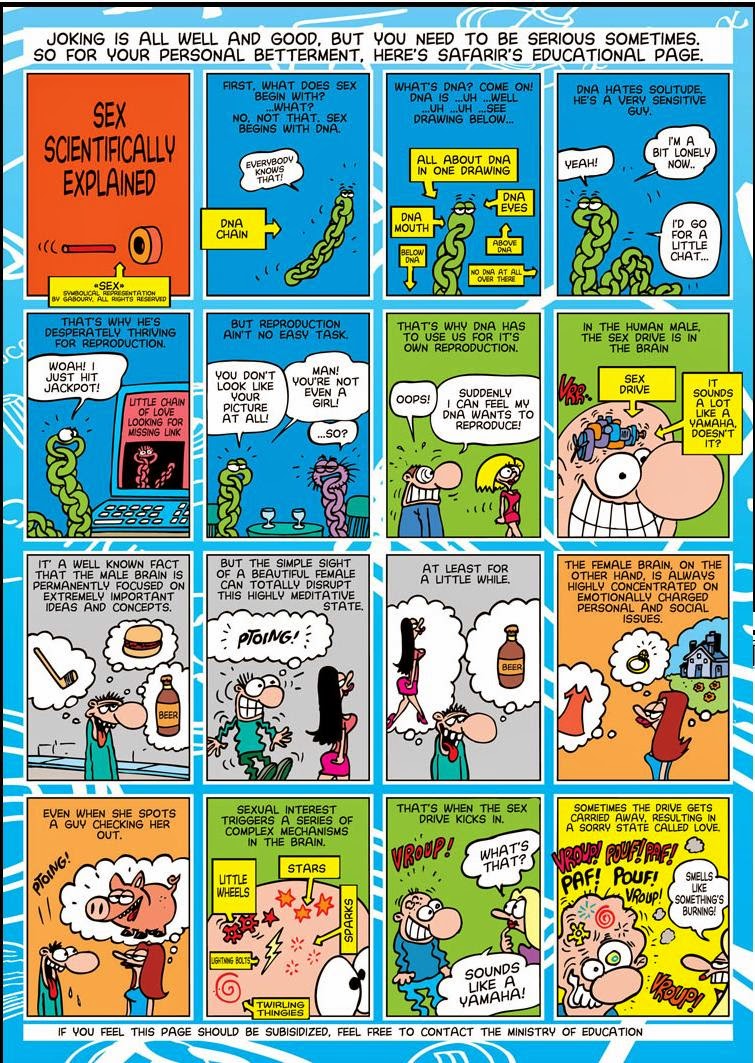 The main problem is finding a potential audience that would want to read his work.  Audiences aren't prone to trying out short-term comics they haven't seen, and there's a general sense of repetition that could grow tiresome when seen all at once.  The pessimism and dreariness of Gabory's early strips are most evident of this, showing the hypocrisy and short-sightedness of life.  And that's not accounting for his various works aimed at children, such as Glik & Gluk.  His more recent work is considerably more upbeat, considering his dark origins, but he hasn't forgotten that sense of black humour that made him a quasi-star. 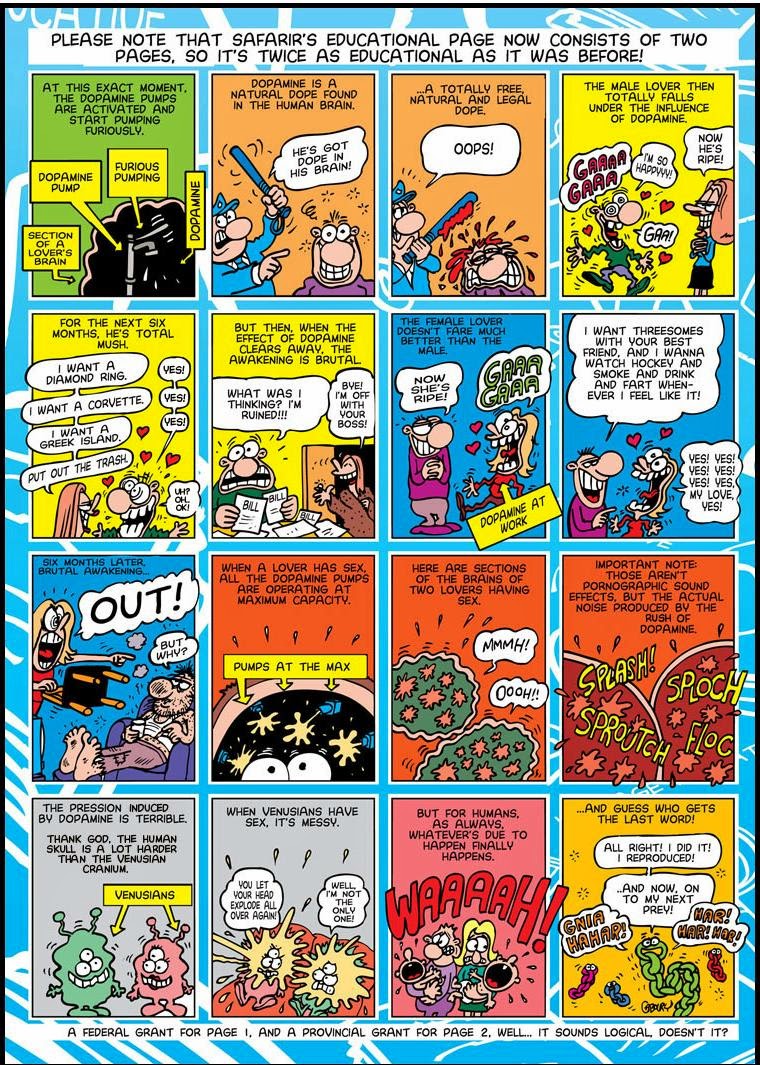 As such, he's more along the lines of comfort art - reliable and consistent with a strong work ethic.  A long list of his accomplishments can be found in his summary at the Joe Shuster Awards. 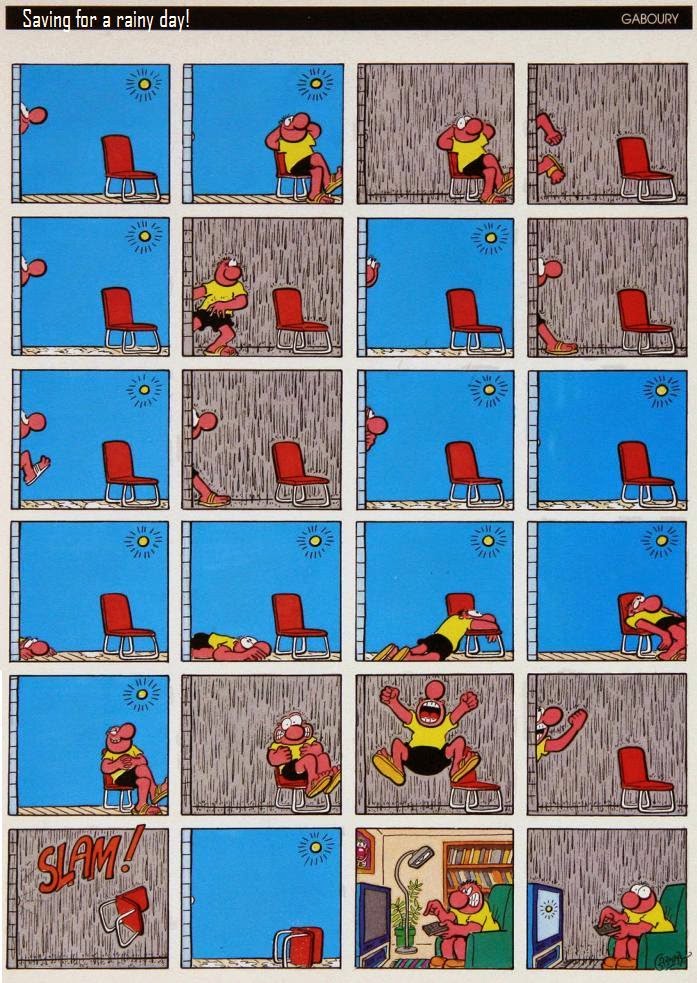