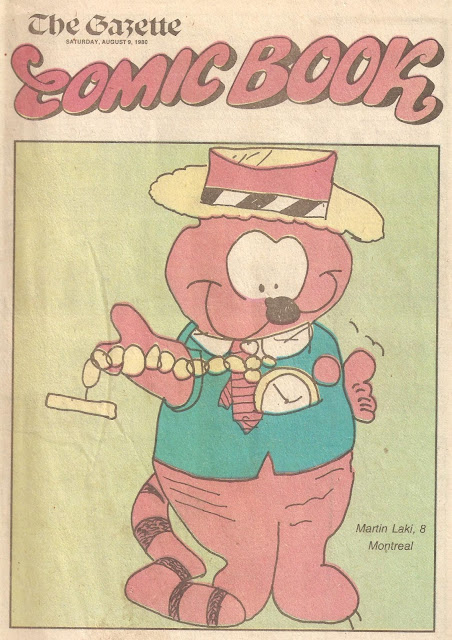 When you read various works by many creators, you begin to notice certain parallels and similarities in theme that have been built on the skeletons of multiple crafts built throughout the ages.  One of the joys in reading other works is backtracking and finding how and where other authors and artists have subtly influenced other writers and artists through their penmanship or prose.  Though sometimes, the influence can be so embedded with miniscule in-jokes that it can be lost to the ages unless specifically pointed otherwise. 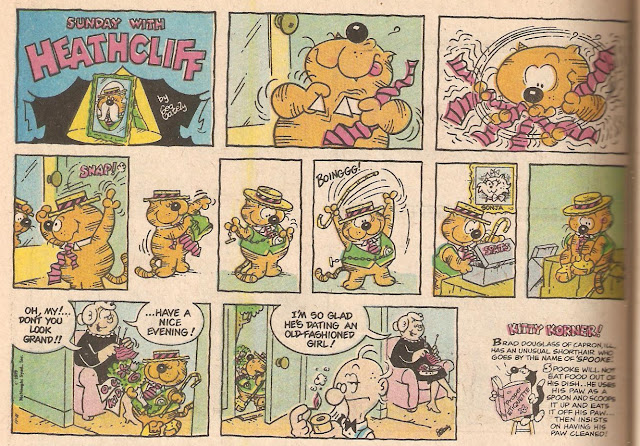 I've mentioned how I've enjoyed seeing other children's interpretation of Sunday Comic characters.  Though there's another realm that I haven't really covered - deliberate lifting their inspiration from specific panels themselves. 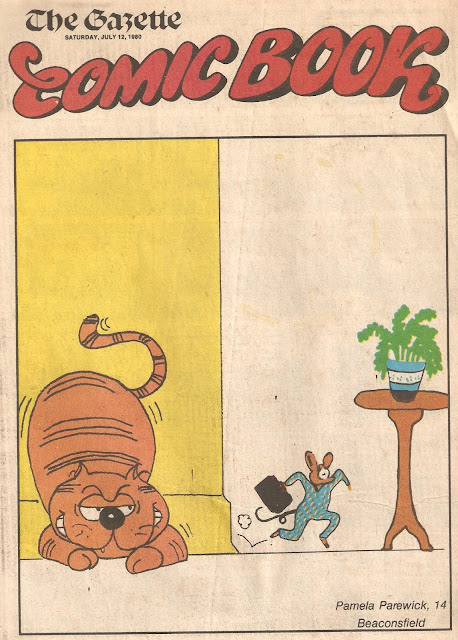 Keep in mind that this isn't direct plagiarism in itself - all amateur artwork starts from figuring out the underlying tricks to capturing the design of a beloved cartoon character, and applying those traits themselves.
Furthermore, sharing their artwork with the newspaper staff was devoid of any profit motive.  They just wanted a chance to maybe have one of their many submissions as the cover for the Comics Page.

In some instances, it can be overwhelmingly easy when a character uses poses that haven't been overused elsewhere.  Heathcliff for instance, doesn't normally wear an old-fashioned coat with a clock, so finding that isn't too difficult.  But finding a panel where he assumes a peculiar stance before lunging on a wary mouse is slightly trickier.  You're more likely to see panels where the cat is walking forwards with two legs at his side at a time. 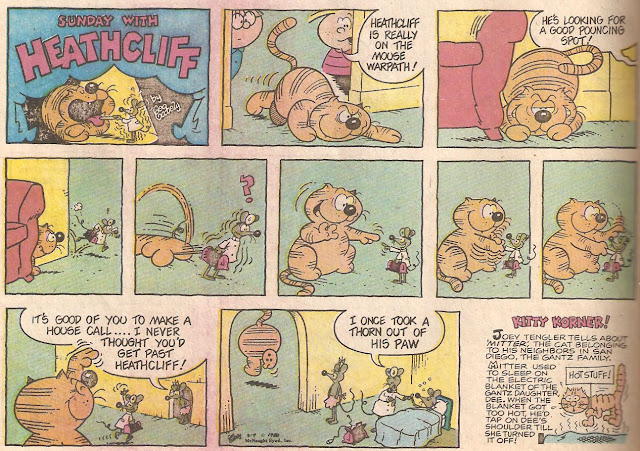 An experiment that removed Heathcliff in the same vein as Garfield Minus Garfield found that people were generally giving inane explanations to mundane events to random and passing strangers with no apparent buildup. 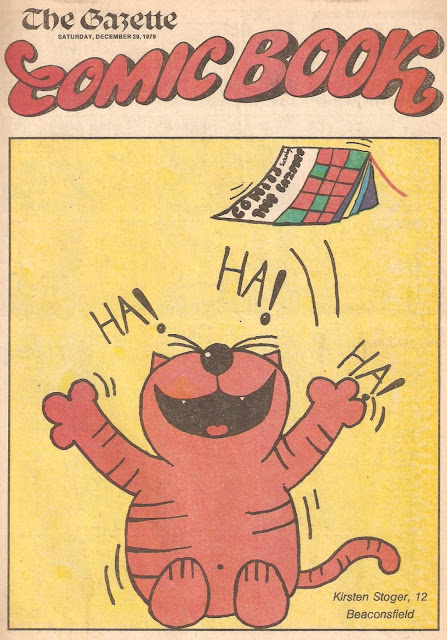 In other instances, it's simply substituting one pose with another potential interpretation.  Where in the above instance, we've got a full-body figure of the domineering fat cat, the inspiration had a different reason for his expression of sheer joy, that only showed half of his upper body. 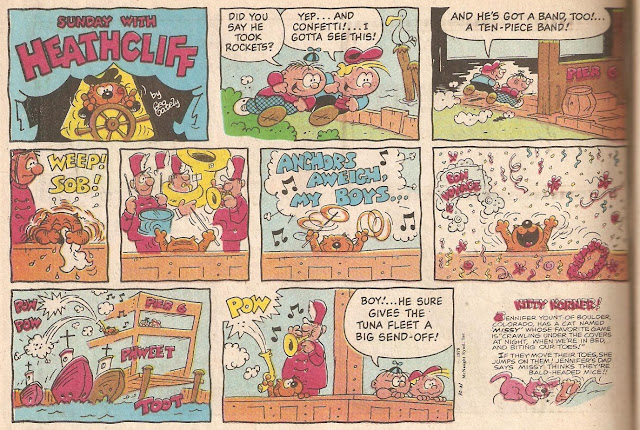 One thing that I didn't catch on account of having a few holes in my collection was that there was another example of a cover being inspired by another comic: 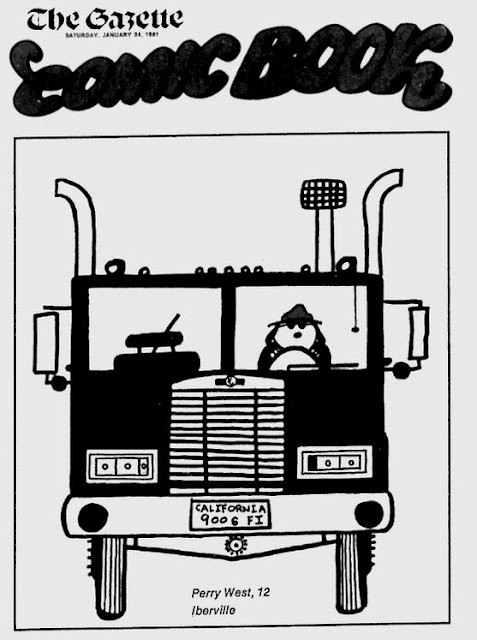 In this instance, it was an expanded version of a descriptive throwaway panel from Peanuts.  Note that we don't see the License plate, and that it's mocked up to more closely resemble an Optimus Prime trailer truck.  Without any colour, we're left guessing as to what it was originally coloured. 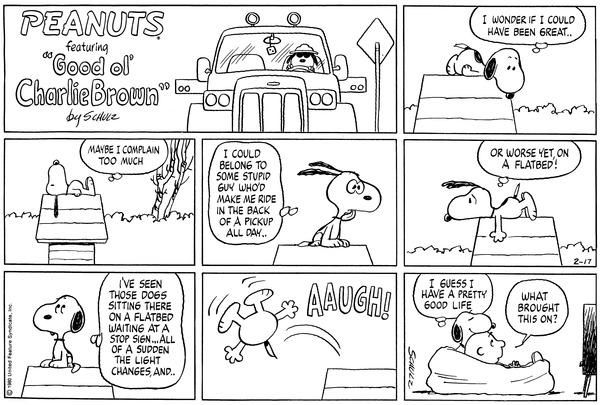 The time frame between a Sunday comic and a child's drawing of same could vary wildly.  The Peanuts example above first showed on February 17th, 1980 (on a Saturday), but the resulting cover didn't show up until January 24th, 1981, almost a year later. 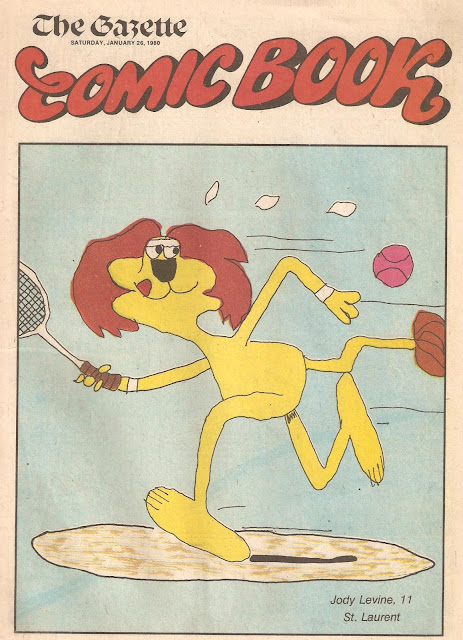 In comparison, this Animal Crackers comic first showed up on in mid-October, resulting in a similar cover a scant three months later. 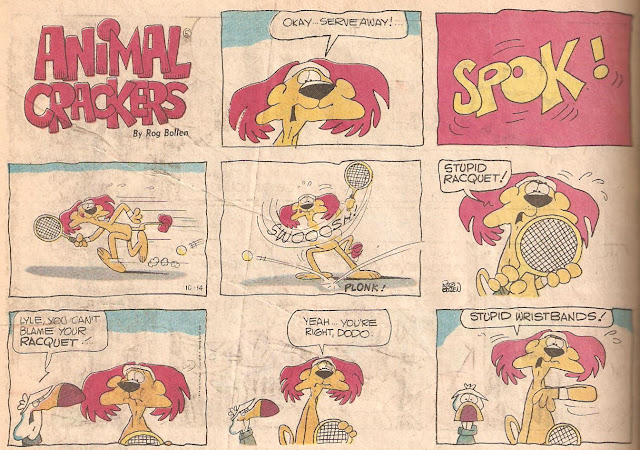 For years, I struggled trying to find the accompanying comic that inspired this cover.  I was convinced I'd seen this represented somewhere.  That maybe if I could only find the comic it represented, I could make a clear case.  The only clue I had was that it appeared before 1984.  I scoured numerous microfiche archives, plumbing their depths to find any hint of Sergeant Snorkel and Lieutenant Fuzz being positioned in such a way that Fuzz would've been mistakenly placed atop General Halftrack, due to a mistake of proportion. 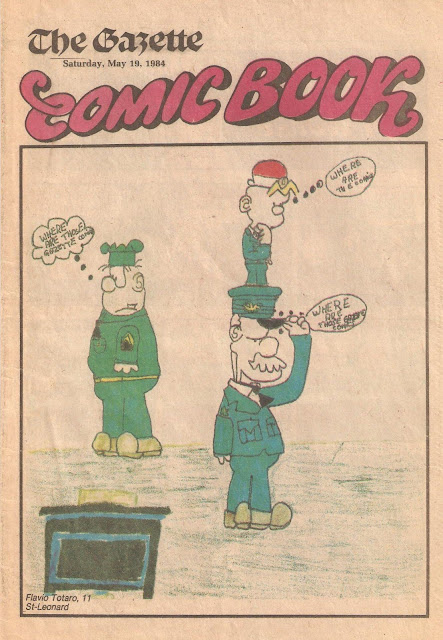 Out of desperation, I even considered going through the Daily strips as well.  But I was saved this hurdle when I decided to use the second-closest example I could think of, involving Sergeant Snorkel's squeaking chair.  And to my surprise - it was just the one I was thinking of.  The only reason it didn't immediately come to mind was because the characters in question had been split up in the panel in question, which "sounded" different.  That, and the Sergeant's head was slightly stretched out of proportion. 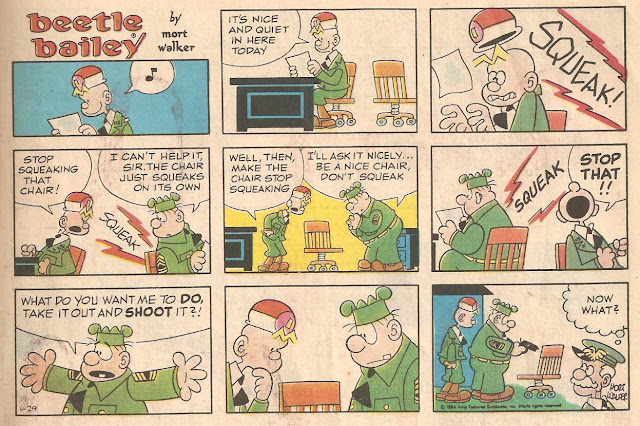 Of course, that's just basic copying artwork from a single panel.  The real joy comes when an experimental artist doesn't limit themselves to one or two samples, and draws from all of them at once. 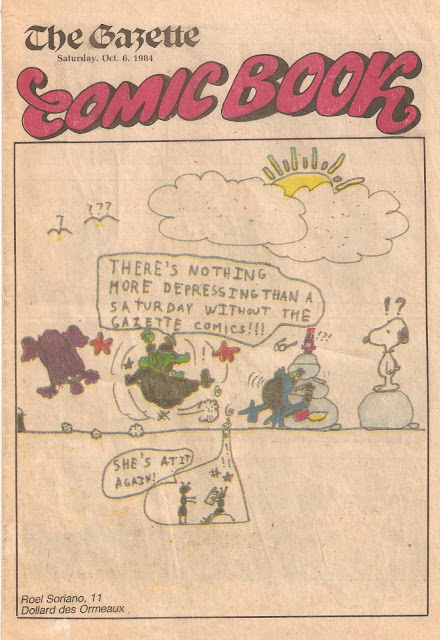 The more examples you implicitly plagiarize from, the more it'll become a "homage". 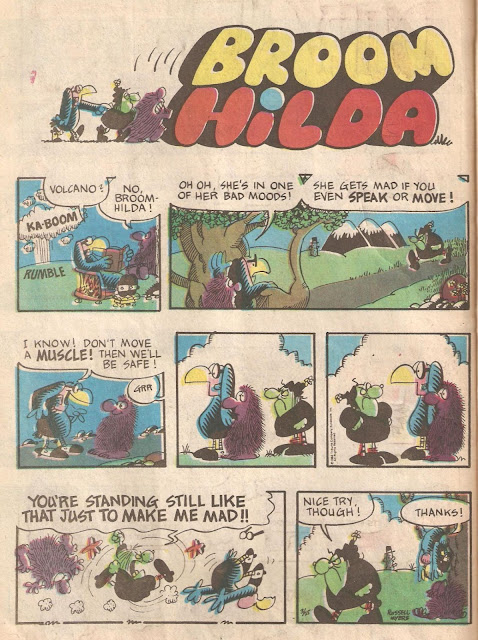 The best example of this would be this cover from Jean-René Huot, who used his prize winning cartoon as a Gazette entry.  You can read more from a enlarged close-up of the text near the bottom. 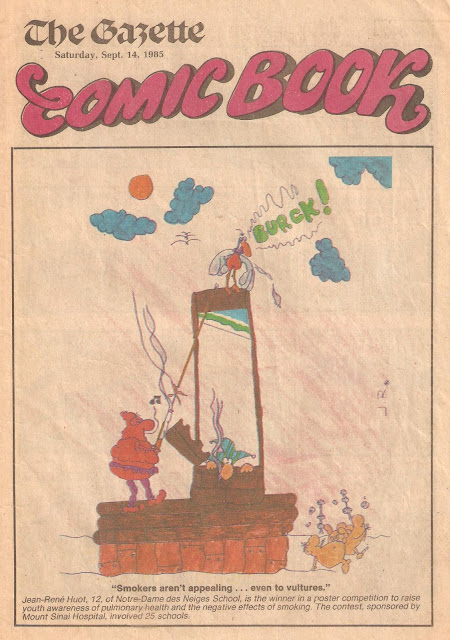 The character designs would be considered unknown to most people, but they're a deliberate riff of the infamous silent artist, Mordillo. 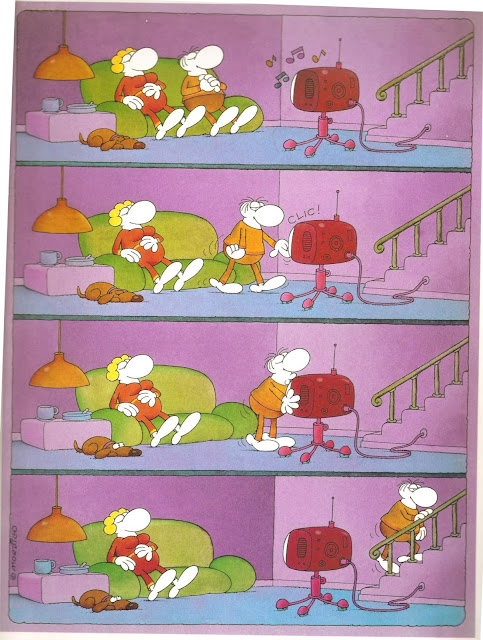 If Mordillo's art looks familiar, it's probably because it shares a remarkable similarity to Duck Edwing's chubby characters from the pages of MAD, mostly in a Medieval setting. 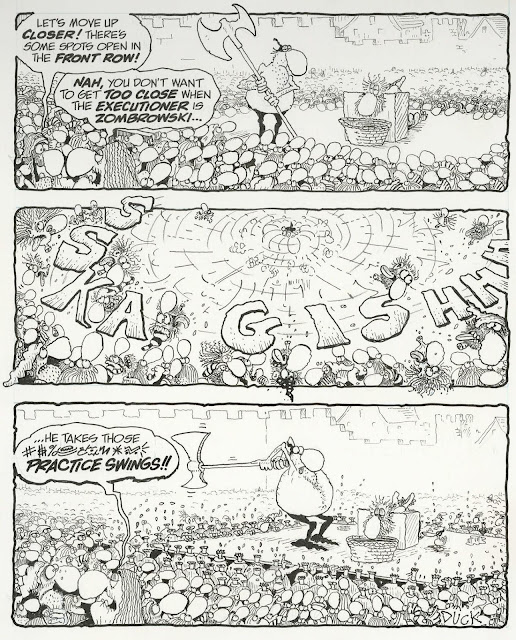 Though that wasn't the only instance of outside influence.  Here's the only MAD-inspired art to make its way onto the funny pages: 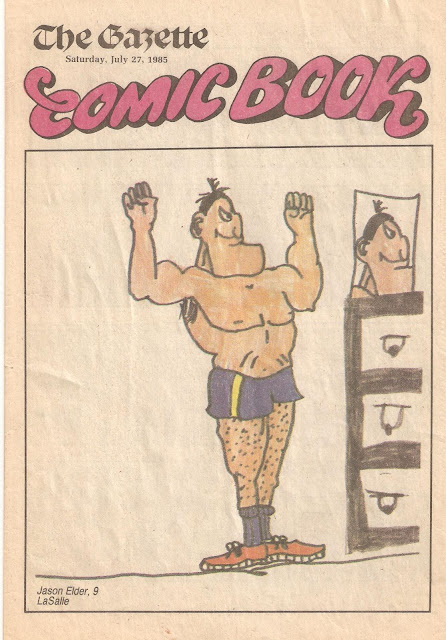 I like the cover above, even though it gets the mirror image from the original wrong, simply because I enjoy the symmetry involved.  The mirror is simplified to a single frame, but the basic outline of the dresser is still there. 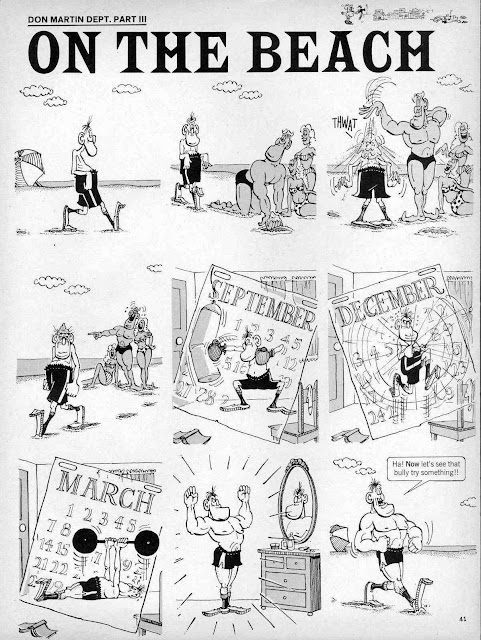 And here's the punch line, just to round things out: 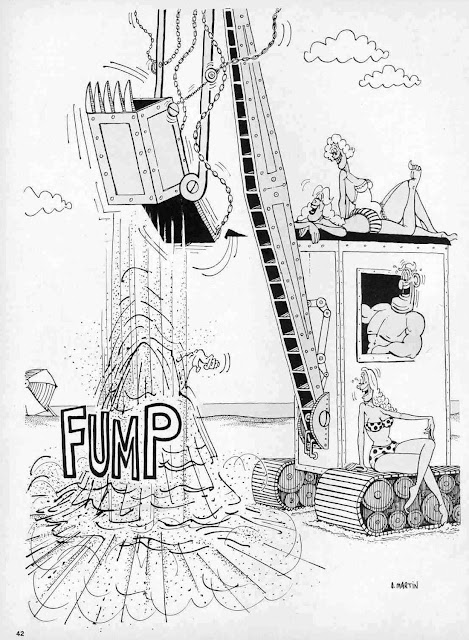 I'm running out of clever ways of essentially saying the same thing, so here's one more batch of conjoined comics and covers to add to the pile. 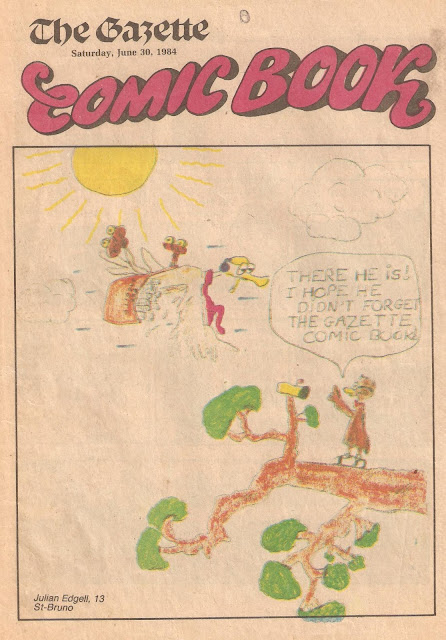 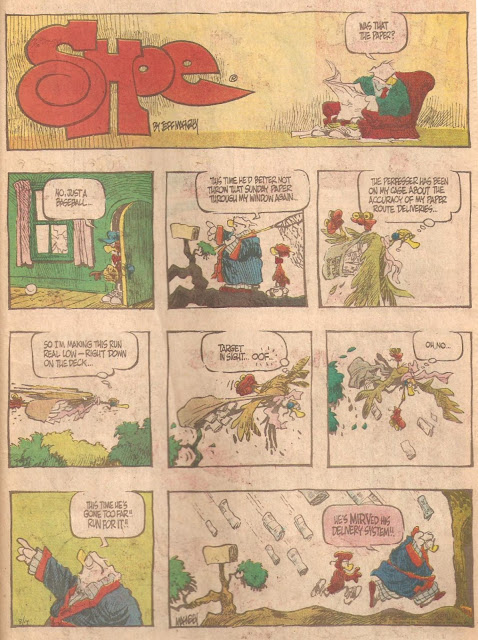