Keep in mind that this is a compilation of concepts I had that were never fully realized, so some samples will remain incomplete.

Before going on to my comic drafts, I figure I might as well point out some worthy Garfield parodies that were found online.  First up is Josh Burggraf's comic consisting of taking two separate comic panels and doing the artwork in between. 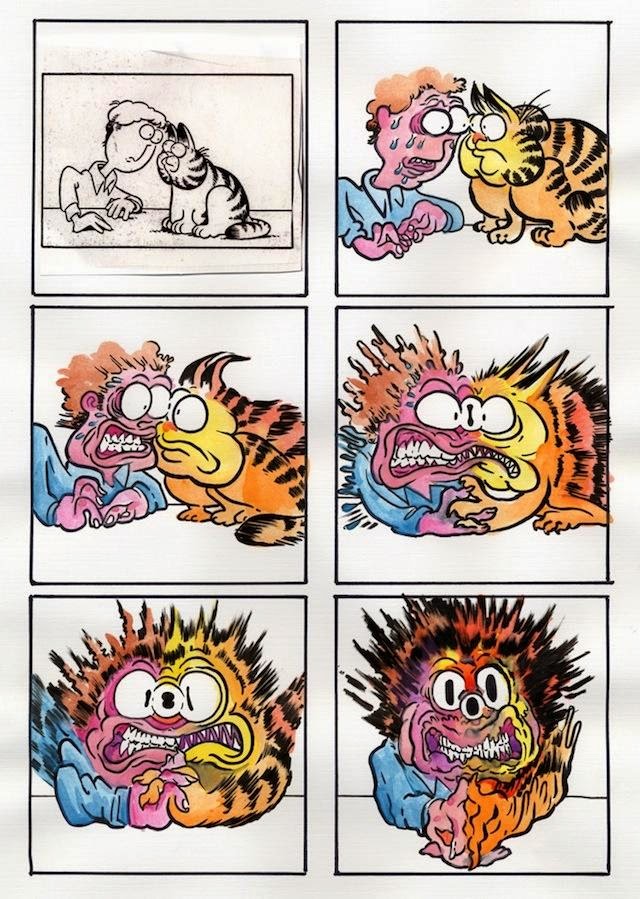 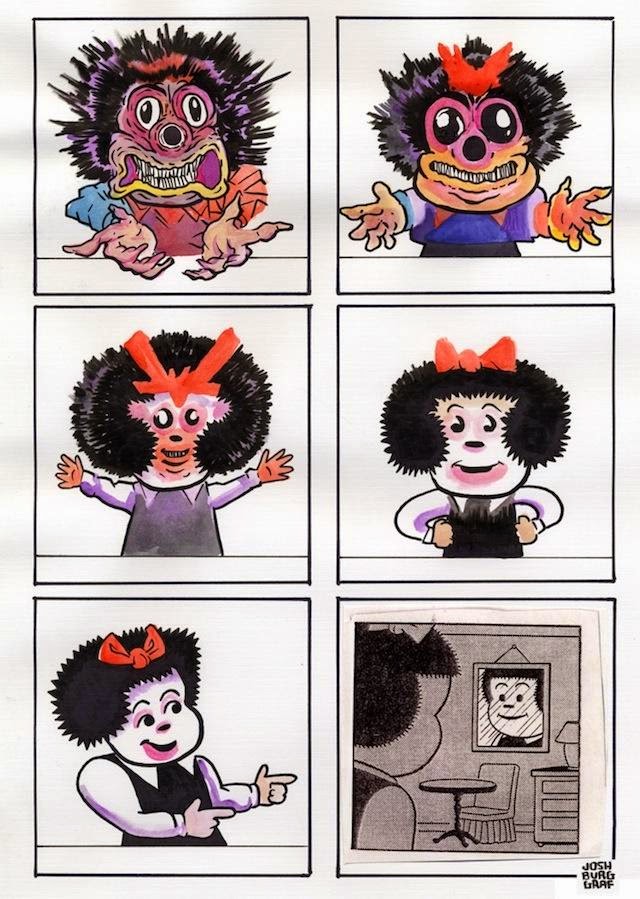 Somewhat appropriate, considering there was a Random Nancy generator before a Garfield one.

Or this comic that's a contender for the most disturbing Garfield since the legendary Halloween week. 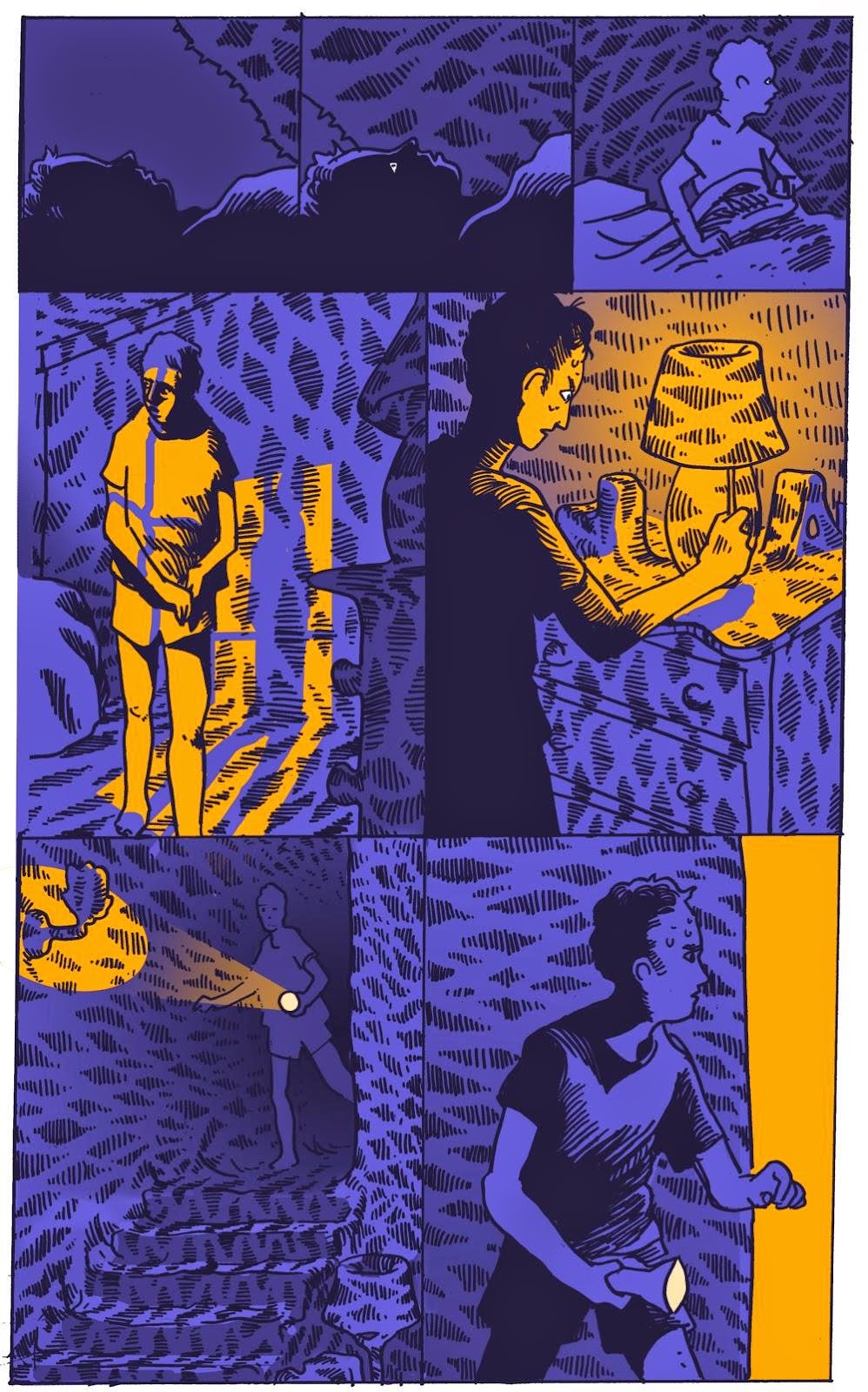 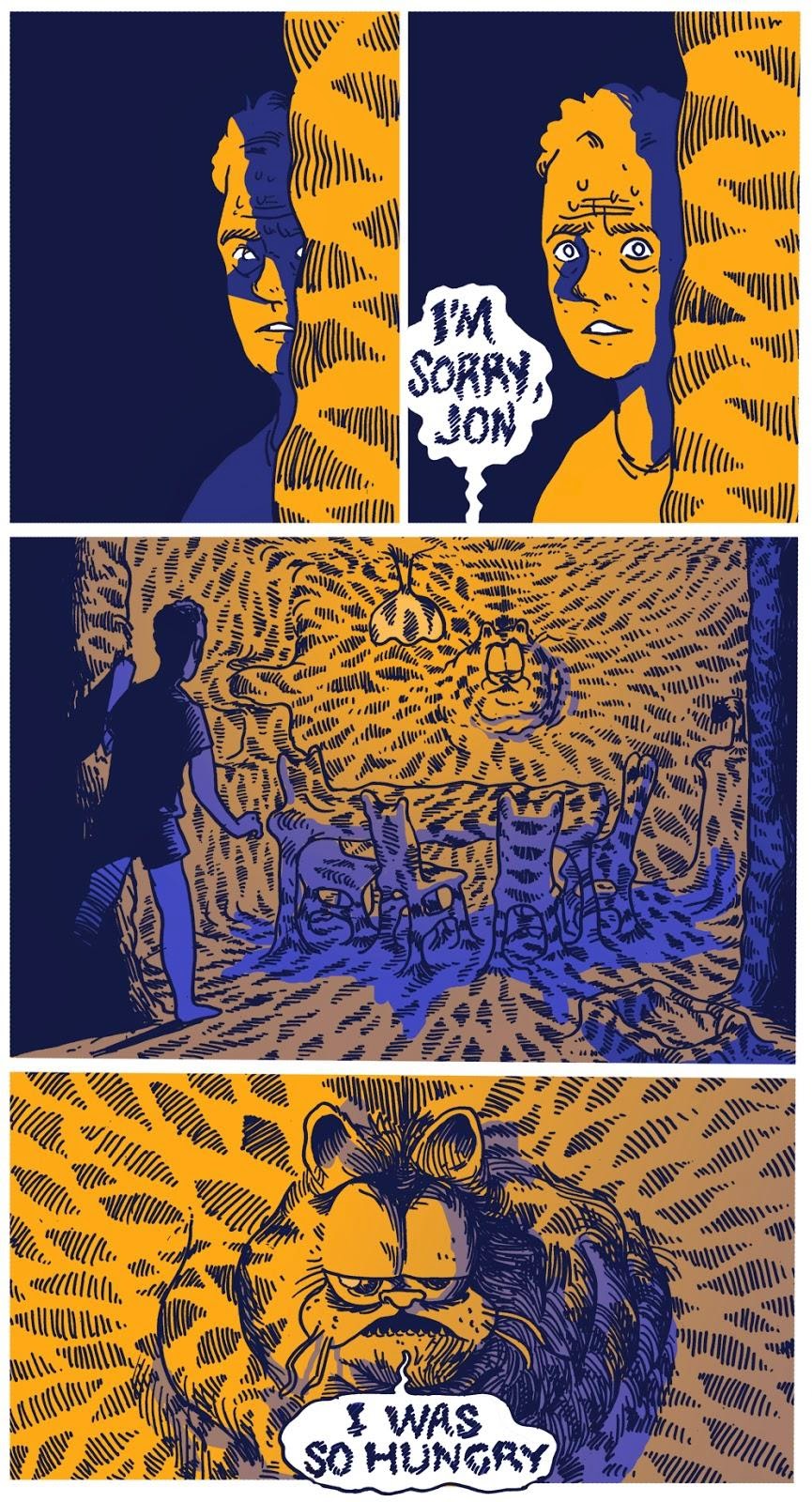 And then there's this oddity that I can't find the original address of, though I'm sure it was either the sixth or seventh comic in the archive. 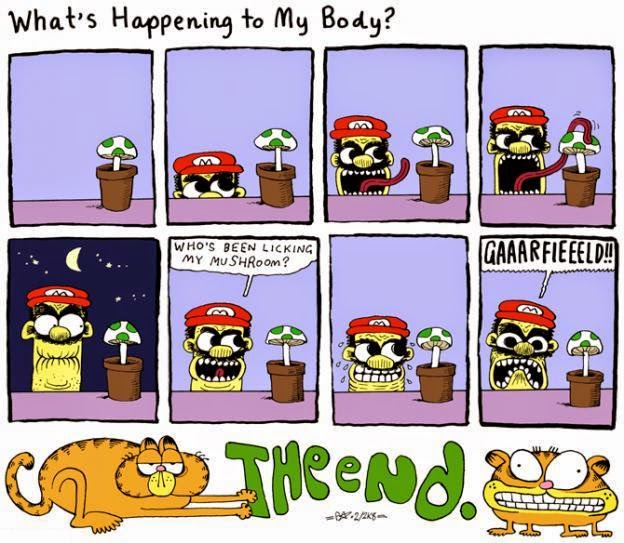 There are also two comics shown on the forums that I'm surprised haven't shown up on the archives yet.

One which will make more sense to Jojo aficionados. 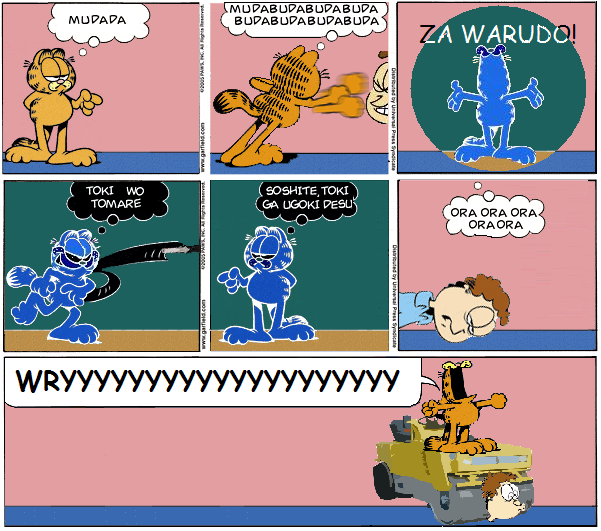 The other, which is a take on the recent Blender Face meme.

Maybe they're still in the queue, or they've just been forgotten.

These are some pages that came from comic magazines that were often in conjunction with other comic parodies.  It seemed somewhat of a shame to just include the Garfields without showing the other comics included on the page.  The sole exception to this was Electric Company Magazine, which was unusual enough on its own, and didn't require further explanation. 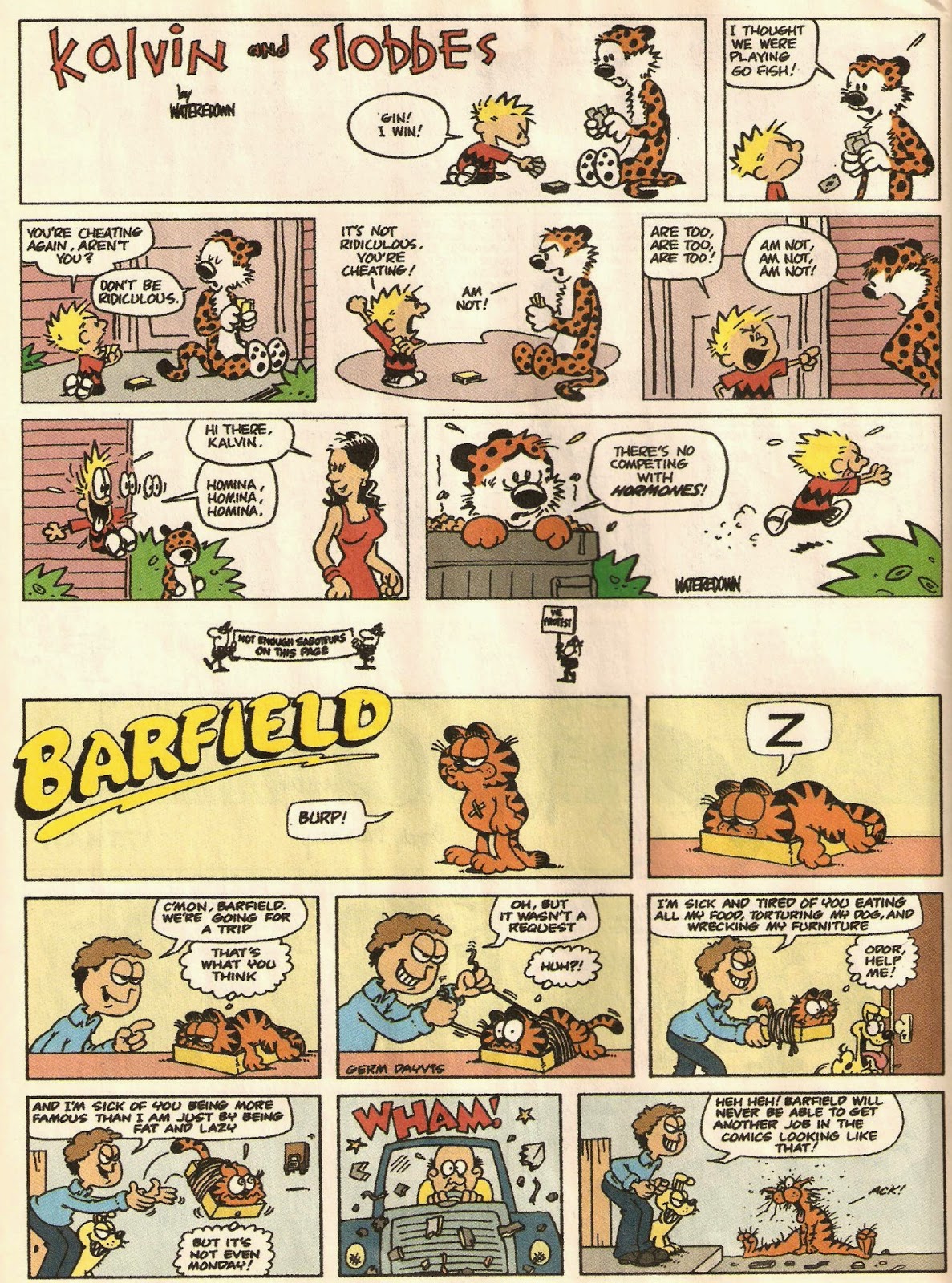 Cracked scripts were hardly the stuff of sophistication, and less than polished, their level of humour was closer to a children's demographic, which would have material that would normally be bypassed by MAD's more adult readership.  As a result, you were more likely to see cartoon parodies like YuckTales there.

The Quebec satire Magazine CROC was the French National Lampoon / MAD Magazine over there, and there would be instances of mean-spirited portrayals of famous cartoon characters, of which Garfield was part of.

However, simply submitting the Garfields alone would put him in situations that would be difficult to explain without removing the other comic parodies for context.  It also didn't seem right to exclude the other comics as well, since I would be effectively be removing their presence from a wider audience. 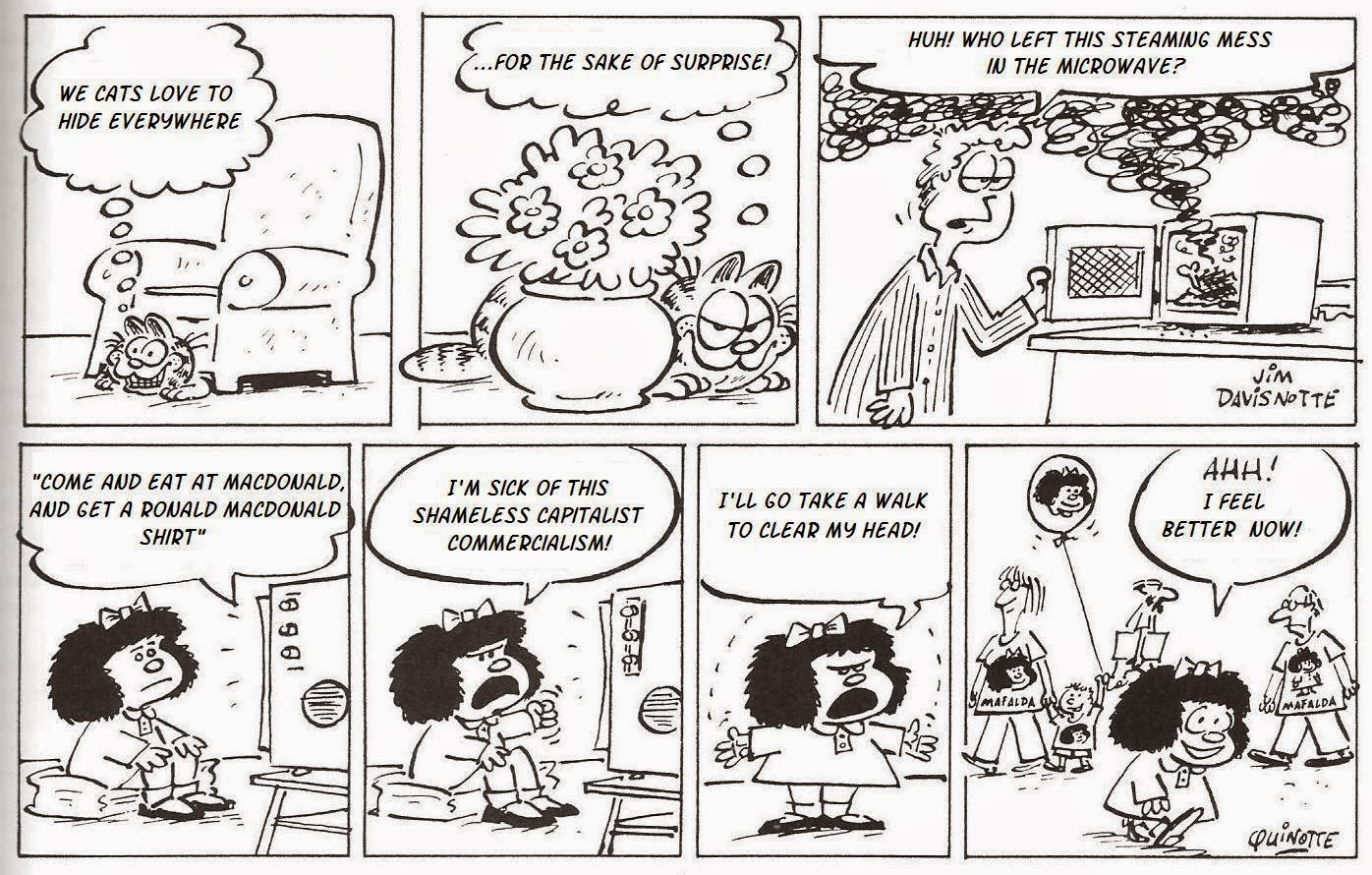 Just be warned - part of a satirical work means staying close to the source material, so if the humour doesn't come across as particularly funny, that means they've done their job properly. 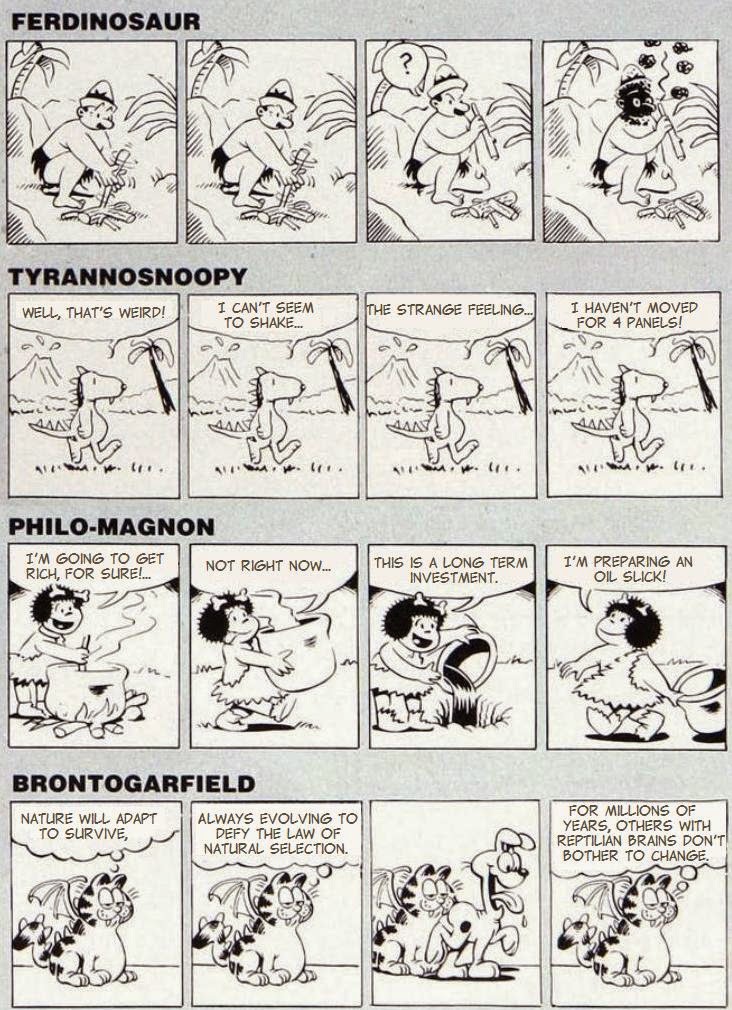 Steven Kellogg is one of my favorite Children's Book author / artists, creating imaginative and lushly drawn watercolour classics such as The Mysterious Tadpole, Can I Keep Him?, Much Bigger than Martin, and Ralph's Secret Weapon.  And that's not counting his retellings of American Folklore like Johnny Appleseed, Pecos Bill, Mike Fink and Sally Ann Thunder Ann Whirlwind Crockett, as well as alternate takes on Fairy Tales such as Chicken Little and I Know an Old Lady, always with amusing noisy details in the background.  His children showed a breadth of imagination long before Calvin made it an innovation on the Newspaper pages.  Not to mention beloved characters such as Jimmy's Boa, Pinkerton and Marvelosissimo the mathematical magician. 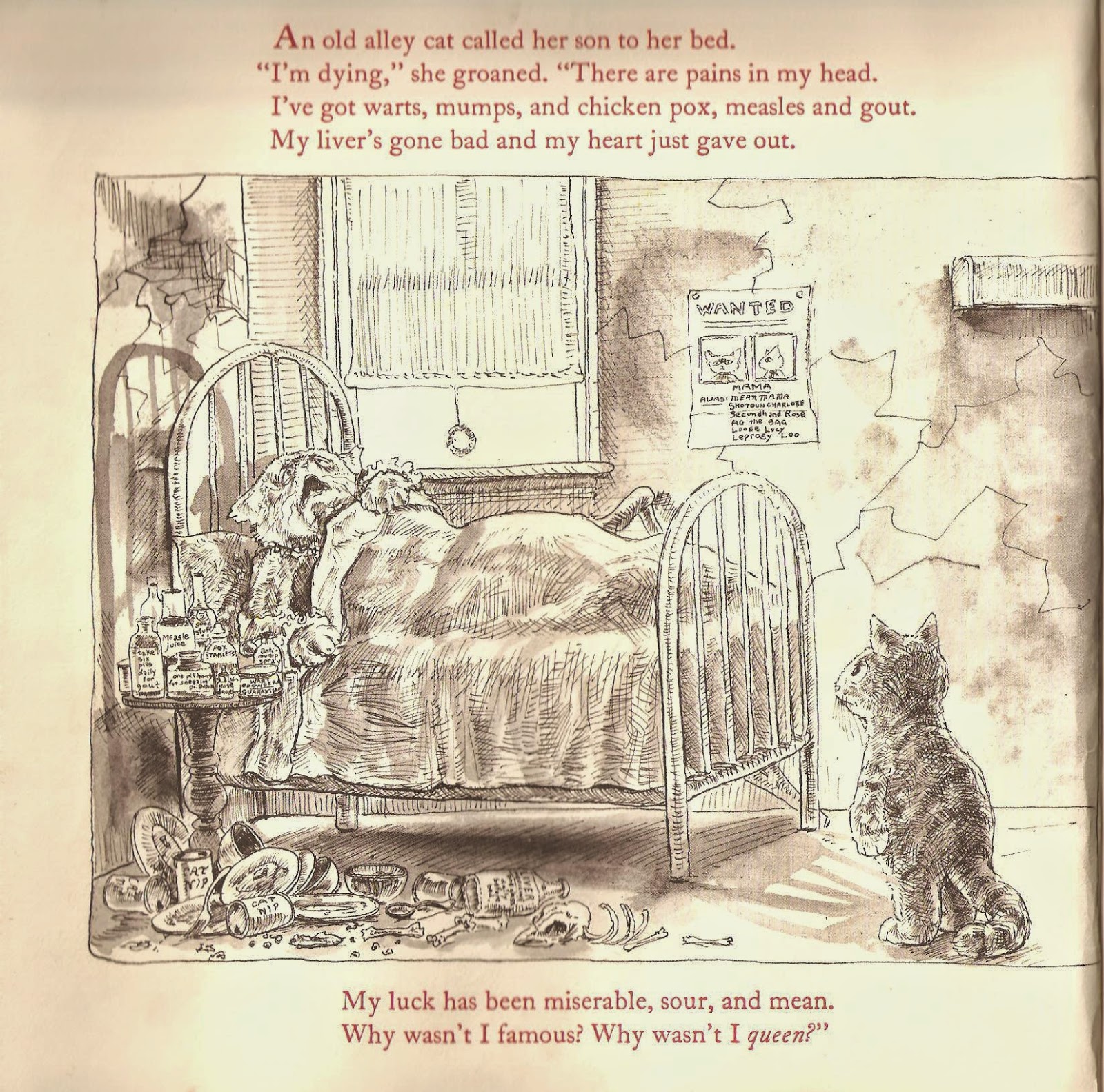 But I consider one of his earliest books, The Orchard Cat (along with Best Friends) to be his masterpiece.  Sadly, much of his older stuff is out of print, and would be completely unknown for today's young audience.  (It's not even available on his homepage!) 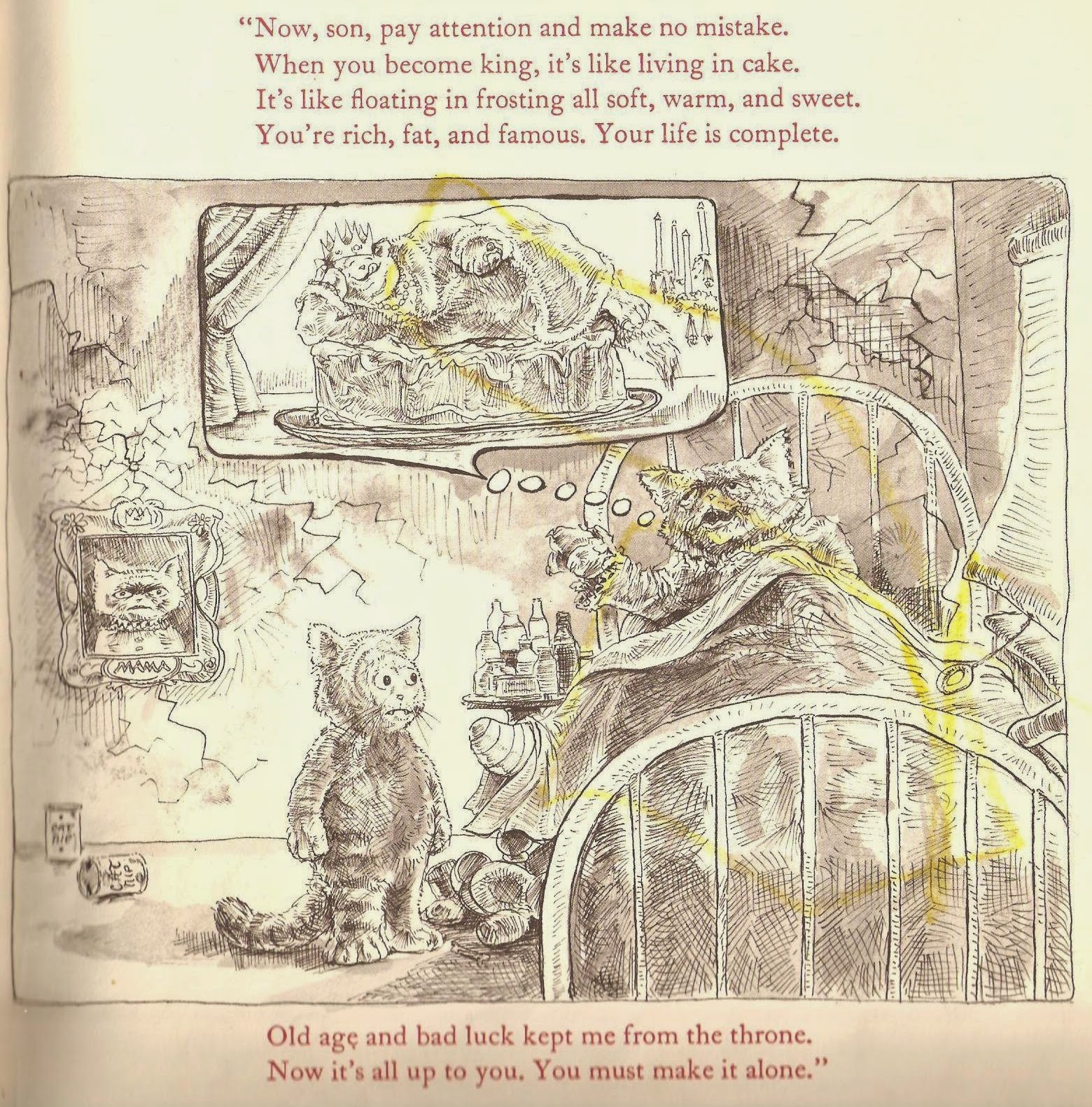 For those who haven't read it, The Orchard Cat is about a cat who is brought up believing that he has the right to rule over everyone, regardless of charisma or ability.  After pretty much bullying and terrorizing every creature in the woods (winning himself no one over to his side), he stubbornly continues off into his path. It isn't until after crashing a children's birthday party, and overindulging himself inside a chocolate cake that's larger than he can possibly swallow, that he's made sick to his stomach.  Once found, he's basically adopted by the birthday boy who says, "What you need, kitty, is someone who cares."  While recuperating, the cat begins to realize that being King isn't what he really wanted all along. 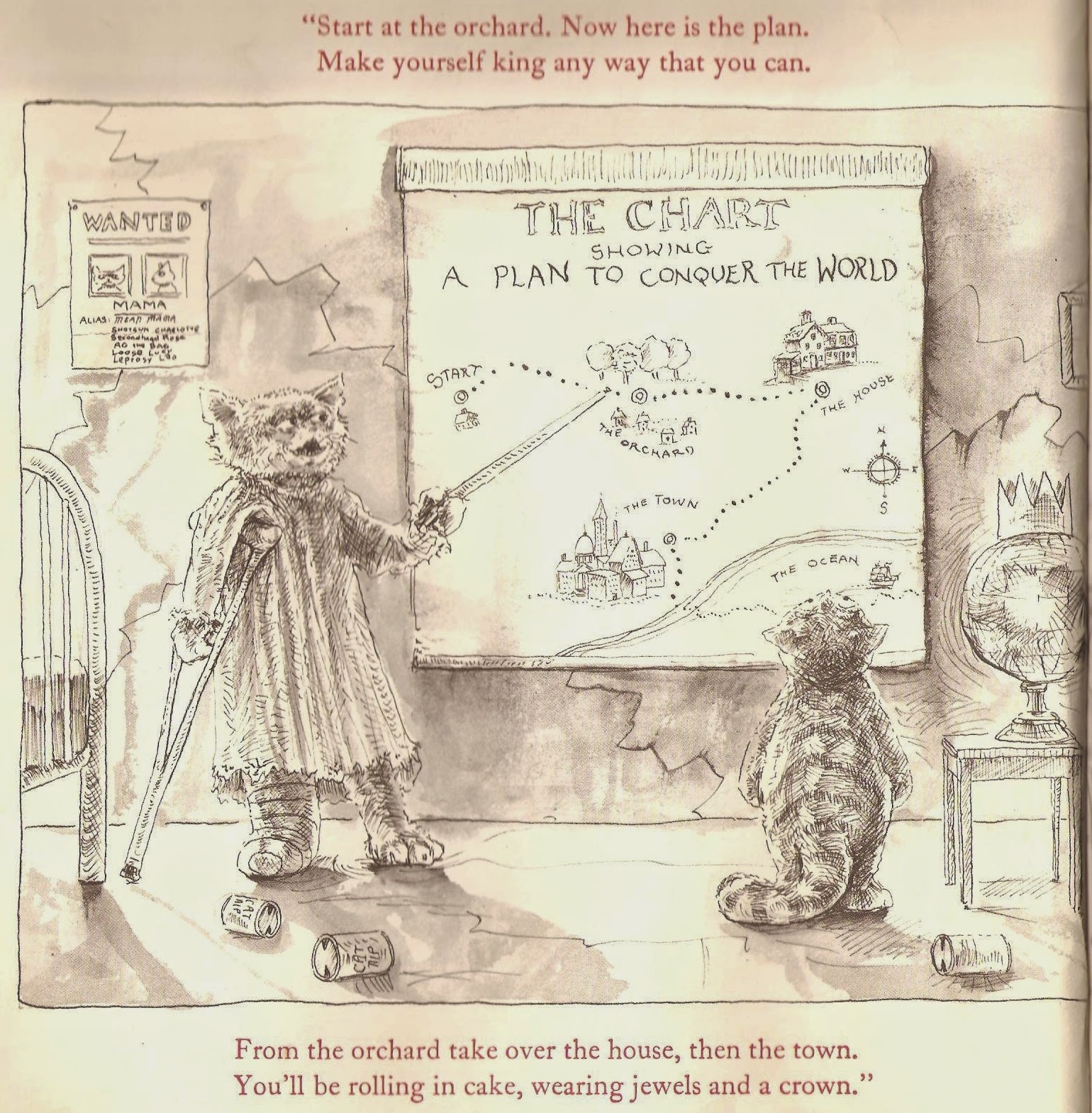 In addition, I had trouble finding multiple suitable frames of Garfield's mother for where the Cat's abusive mother relays her last words upon her son.  It also didn't seem right to turn his mother (who'd been nothing but considerate and affective to her son) into a Ma Barker figure. 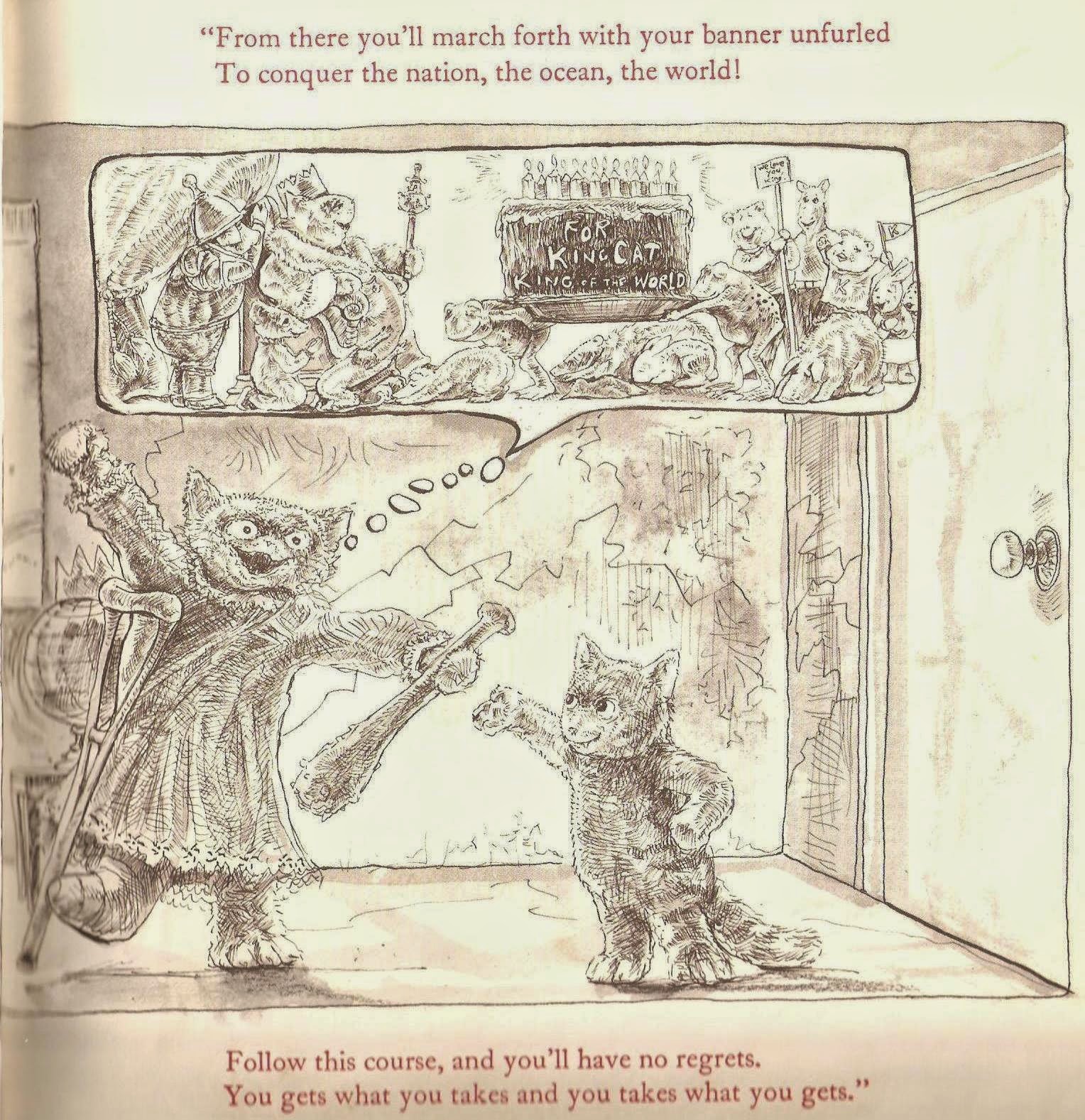 You can see from the sample below which comics I'd intended to use.  It shouldn't be that difficult to figure out which goes where.

Kliban is an artist who is best known for drawing distinctively grey tabby cats.  One particular comic happened to catch my eye, and I suitably combined it with the chorus from Millions of Cats.  While a suitable mash-up, I felt it wasn't close enough to an actual Garfield theme to warrant submission. 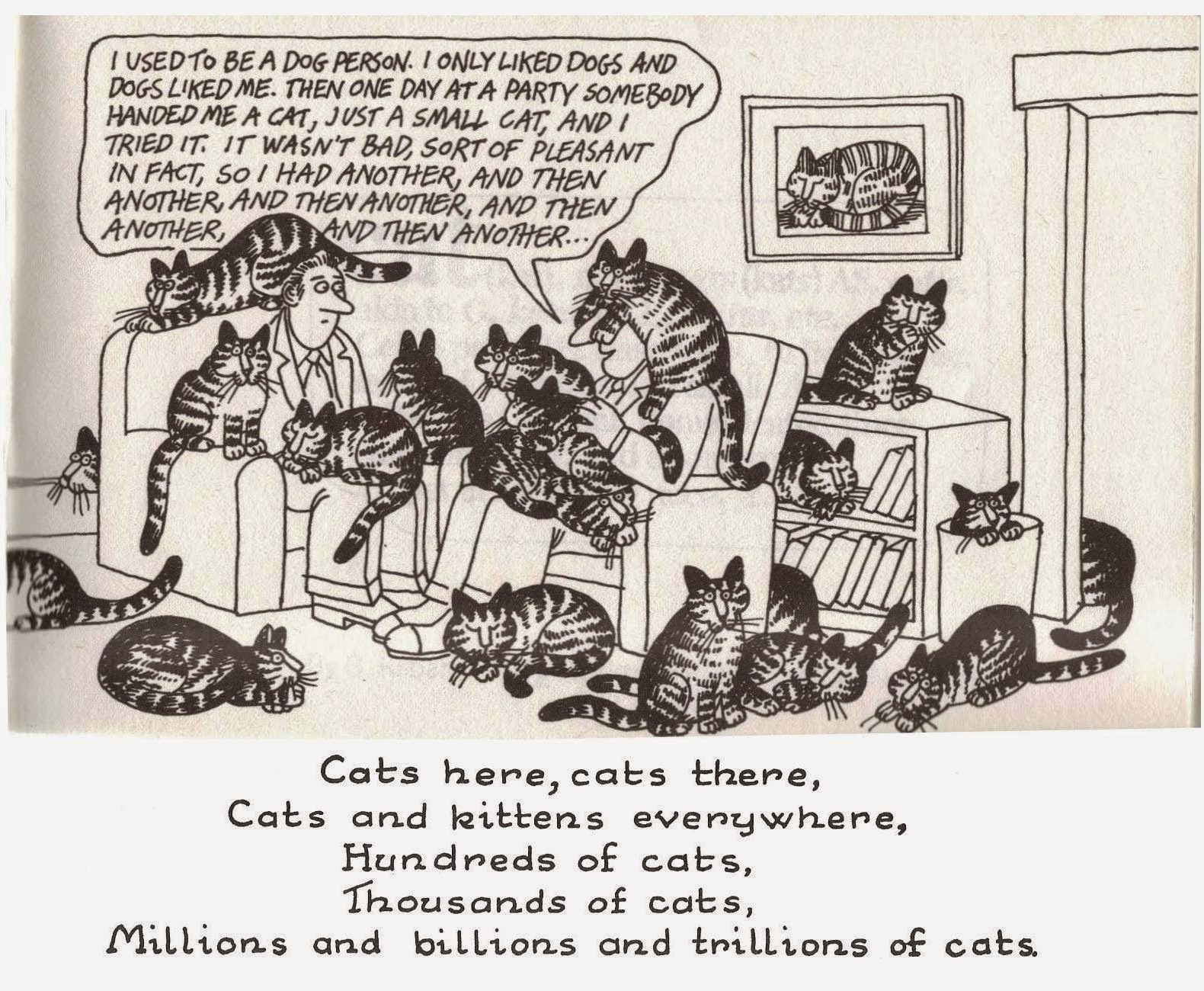 Aislin is best known for being a Canadian cartoonist who does scathing caricatures of Montreal politics in striped-down form.  Sometimes they're so condensed that its oftentimes difficult to know what's being referenced without historical notes on hand.  His crosshatching style and "dandruff" dots signature style is easily recognizable, and he has no trouble with imitating other cartoony styles if they serve his purposes.  He branched out in doing a children's book about a dog named Tootle, which starred a dog who wanted to be a human. 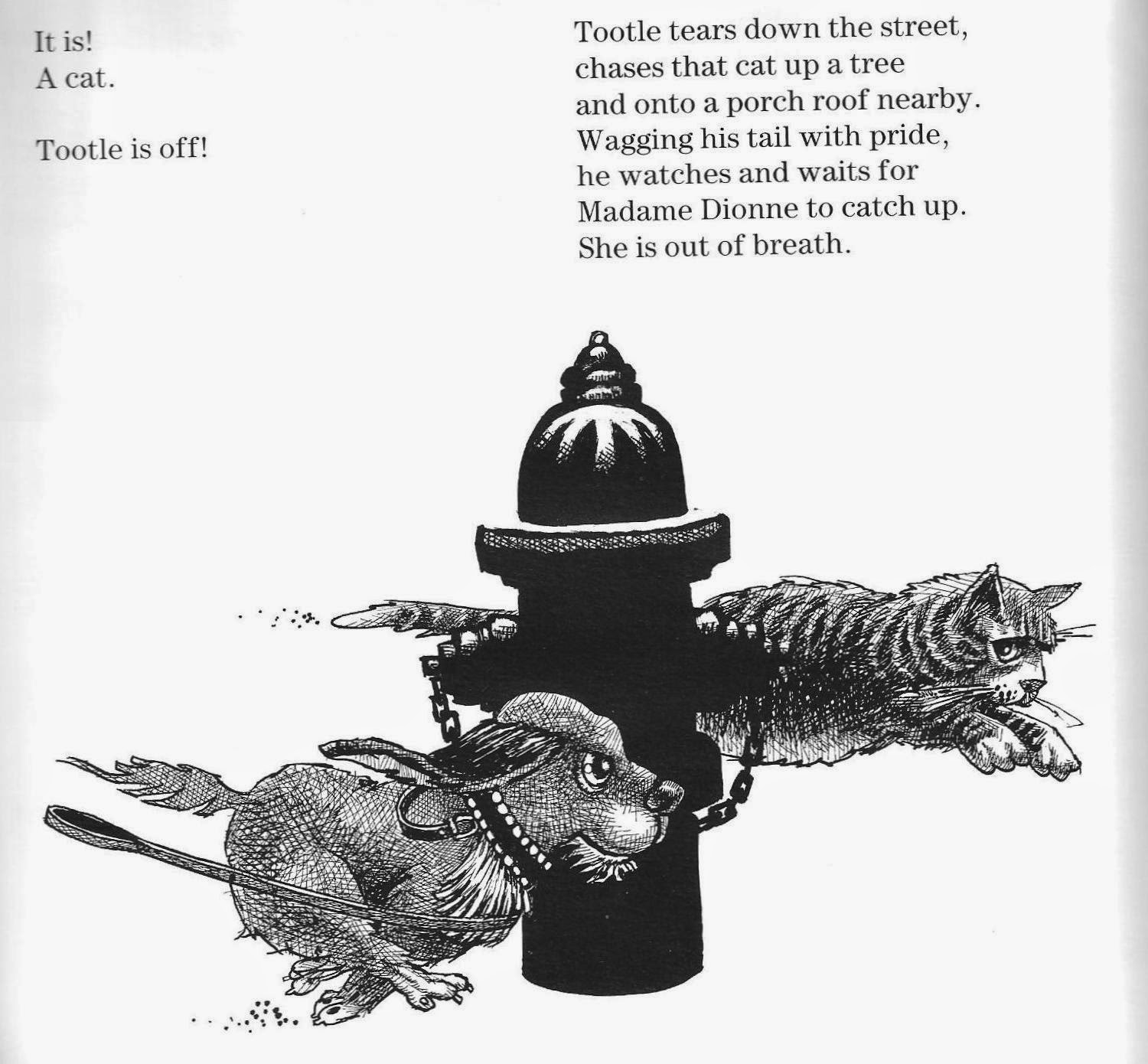 Sadly, just having a picture of a tabby cat isn't enough - I need to find inspiration or a connection to a Garfield strip, and there simply wasn't one I could find.  Not surprisingly, Garfield's popularity comes from avoiding anything remotely controversial, so it's no surprise why I had so much trouble.

That obsession in finding images of orange cats for reference material led me to borrowing a sub-par 3-D animated movie, Missing Lynx.  It's about an accident-prone Lynx and a gang of endangered species trying to escape from a poacher that's closer to Clayton than Percival McLeach in terms of intimidation.  Needless to say, I wasn't very inspired to find any suitable frames for parodying. 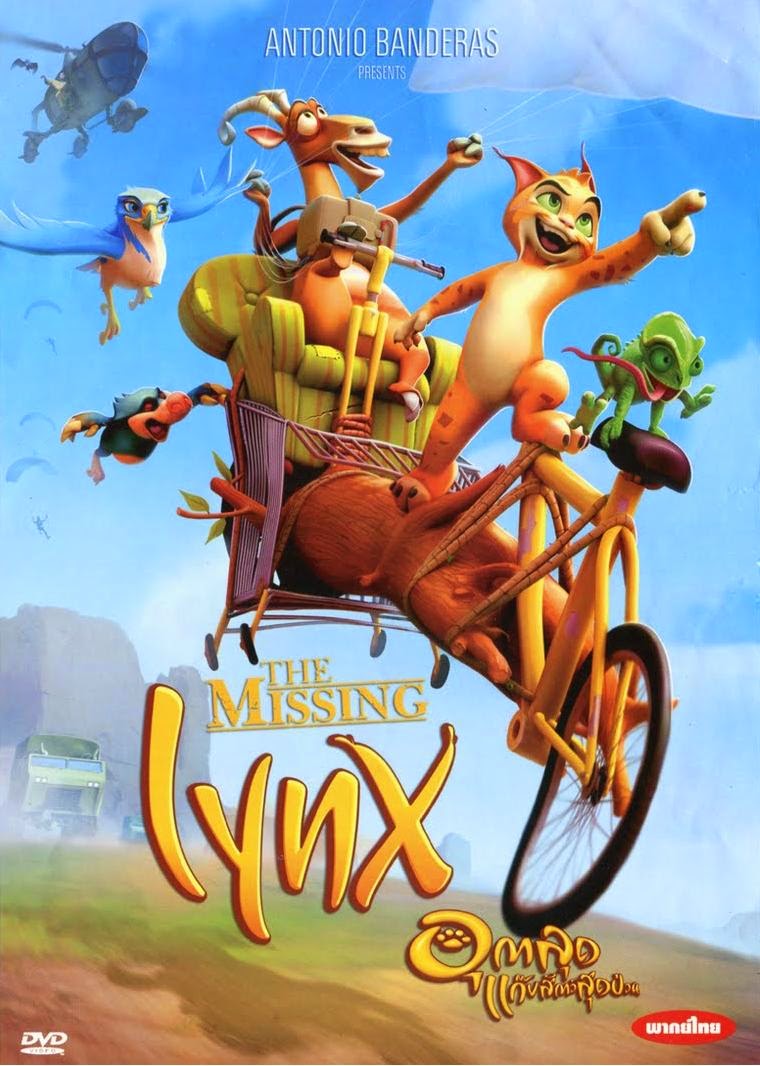 Other times, my reach exceeded my grasp.  There was a Krazy Kat that had a rather catchy Sunday comic with multiple rhyming stanzas.  However, I was simply intimidated by the amount of searching I'd have to do to find suitable frames for each line, as well as the amount of editing involved.  Furthermore, I was stumped on how to end it properly, considering that it cuts off near the end.  Although there already was a SROMG featuring a Krazy Kat, it was hardly enough to gain a rise in popularity, and my tribute would still be considered odd.  Maybe somebody else can pick up from where I left off. 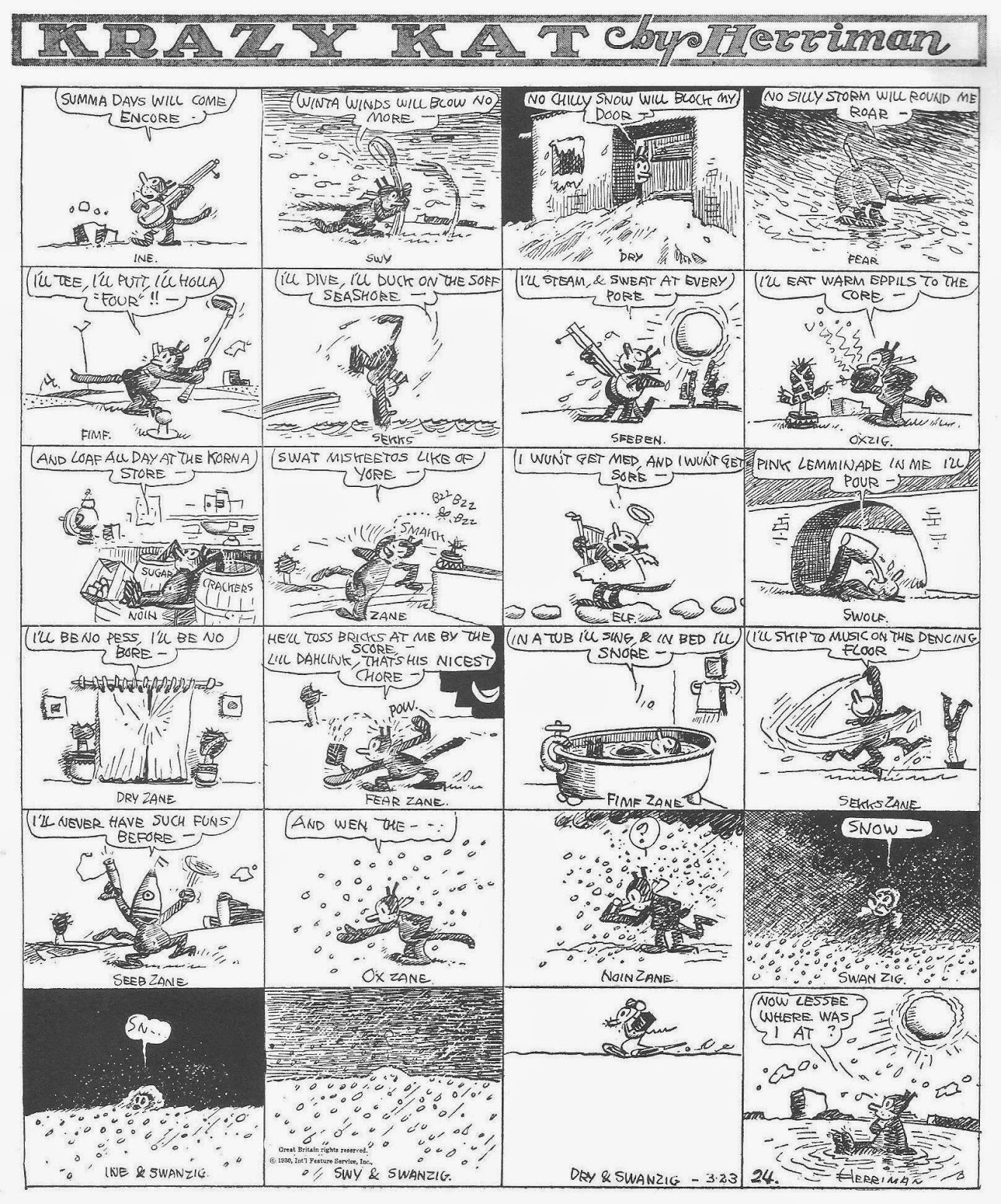 The Gazette Comics where I got my love of reading Sunday comics from would have their front cover graced by various drawings from multiple budding child artists.  The subject matter would be extremely varied, ranging from everyday childish scrawls to commercial toy products to animated characters, and yes, even sometimes some familiar cartoons ripped from the funny pages. 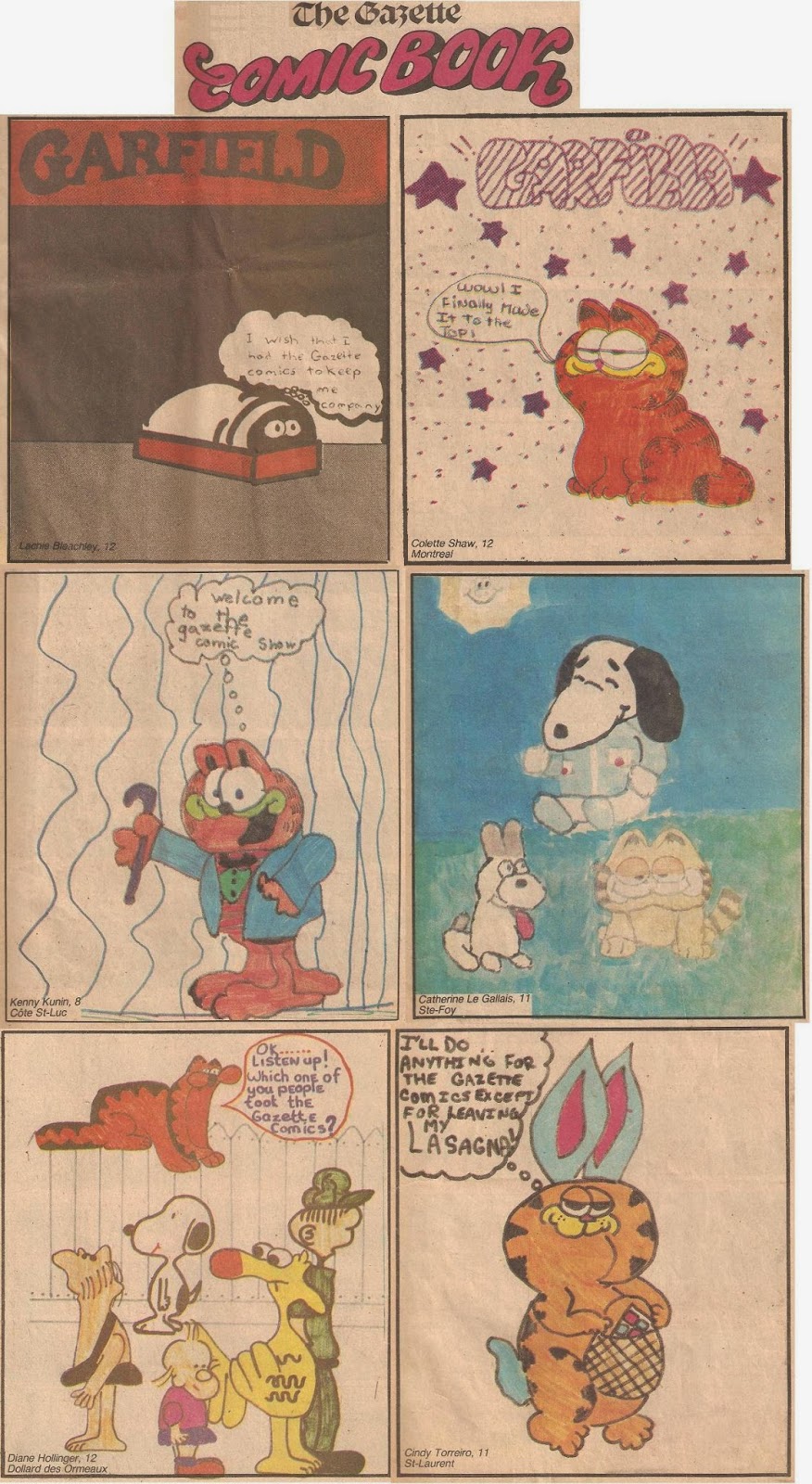 From this collection of covers, you can make out a kind of chronological story that goes as follows:

Garfield is intimidated about making an appearance at first without guidance.  Then he rapidly rises to the top of the ranks in popularity.  Within short time, he's hosting the appearance slot.  Soon, he's hobnobbing with some of the highest cartoon figures.  However, being associated with celebrity status isn't an equal opportunity market, and there are a few bad eggs in within the ranks.  Some cartoon characters (who shall remain nameless) have no scruples about playing pranks on the fat cat, much to their delight at tormenting whenever possible.  In order to get his beloved possessions back, Garfield is forced to undergo enduring embarrassing public initiation rituals, though there are certain limits he won't cross.

When I made the suggestion to do a compilation effort for Garfield's Judgement Day, I was hoping I would be able to attract other enthusiastic fans who wanted to create something along the lines of Batkira or Sailor Moon Animate.  However, the project proved to be too overwhelming, especially considering the number of new characters would outnumber any background characters in the strip.  Let me rephrase that - any REUSABLE background characters, since unless they're pretty girls, the men are pretty varied.  I suppose it's easier to remake a widely beloved franchise if the audience is already aware of every single frame, rather than recreating something from scratch with the barest bones of a plot available from a fairly obscure book.

One thing that occurred to me that was mentioned in the background was that various pets made complaints about the limited imagination of their names, being regulated to either Mittens or Spot.  I figured that this could be alluded to when Garfield first arrives at the theater during the storm.  While canvassing the crowd to see who'd made it, the scene could go something like this:

I made contact with one of the regular SROMG contributors who commented on a forum, and this was the sole result of all our work.  (Most of it mine)  The scene in question takes place when Garfield and the other animals gain the power of speech to warn their owners about the upcoming storm.  Jon is coming home from the grocery store and striking up another one-way conversation about what tantalizing treats he's just bought.

This last one is something of a personal regret.  Often while taking public transportation on the highways, I would see the outlines of three warehouses in the horizon.  They were named as follows: GARTERM, GARPORT and GARFIELD.  Yes, there actually was a building named Garfield. 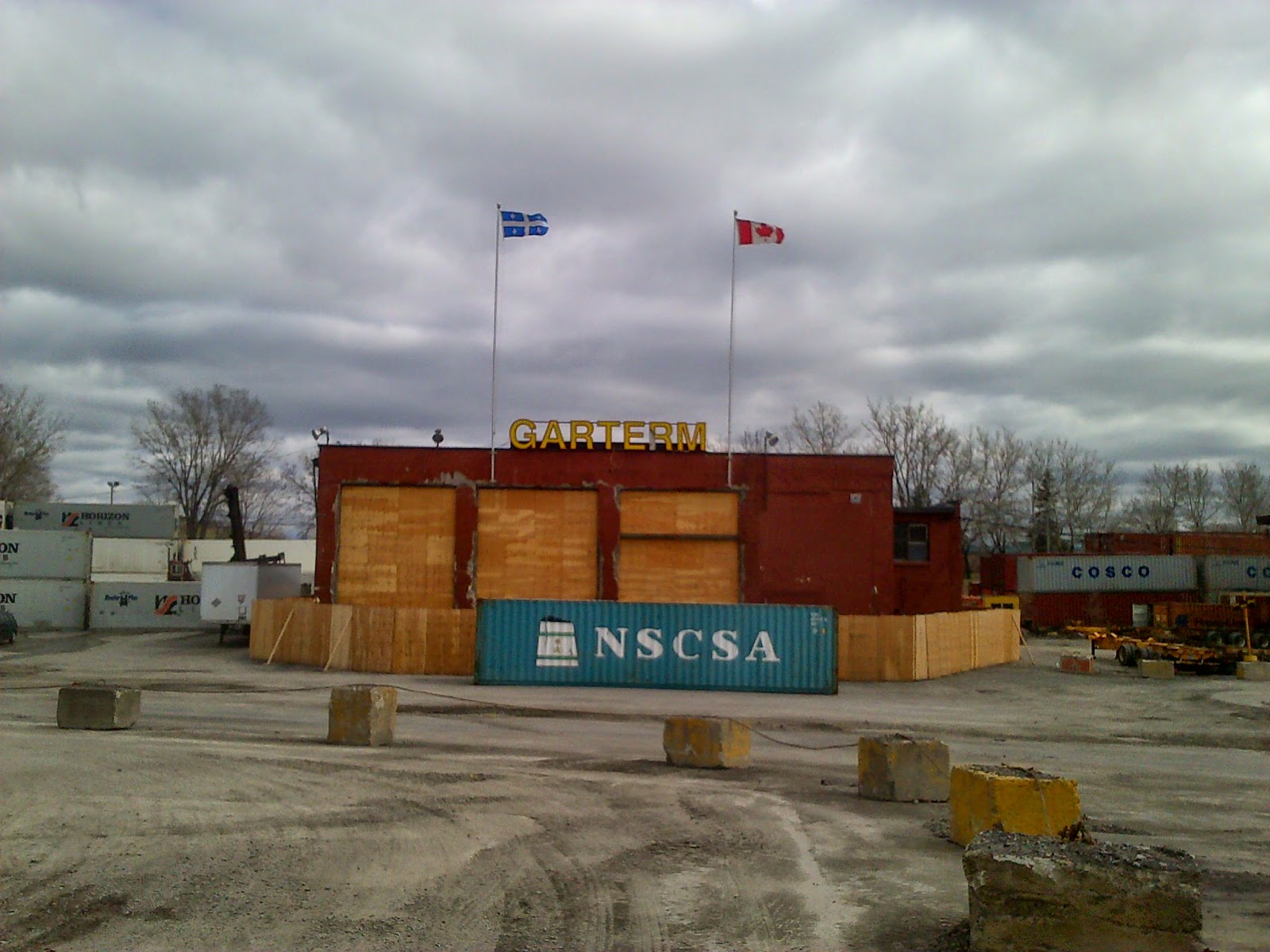 For a long time, I wanted to capture all three of their logos into one picture.  Unfortunately, by the time I had a camera and close-up access to the location, the Garfield warehouse had disappeared, leaving the remaining two warehouses standing. 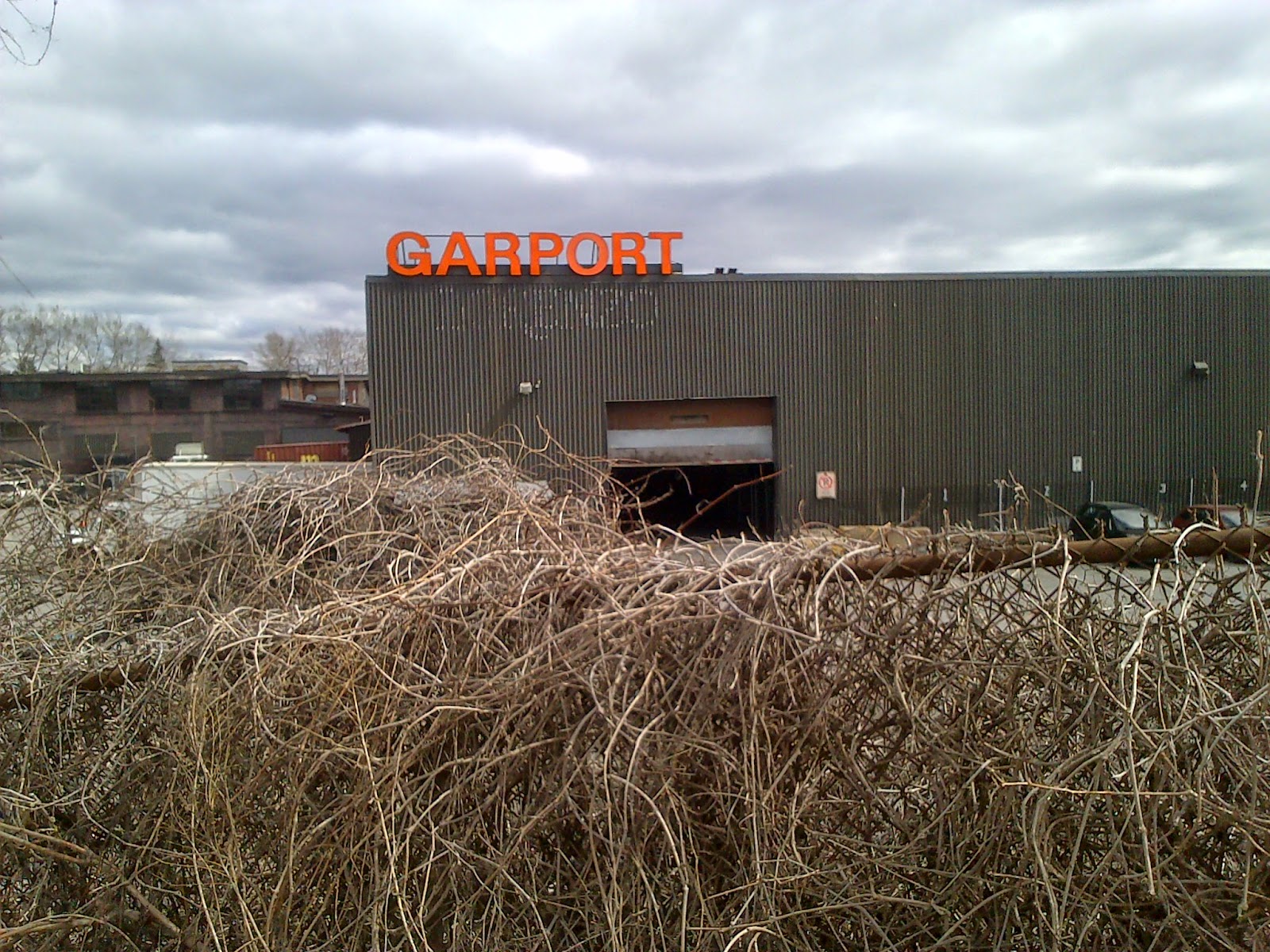 If there's anybody out there who has photographic proof of the land where Garfield once stood, I'd be grateful. 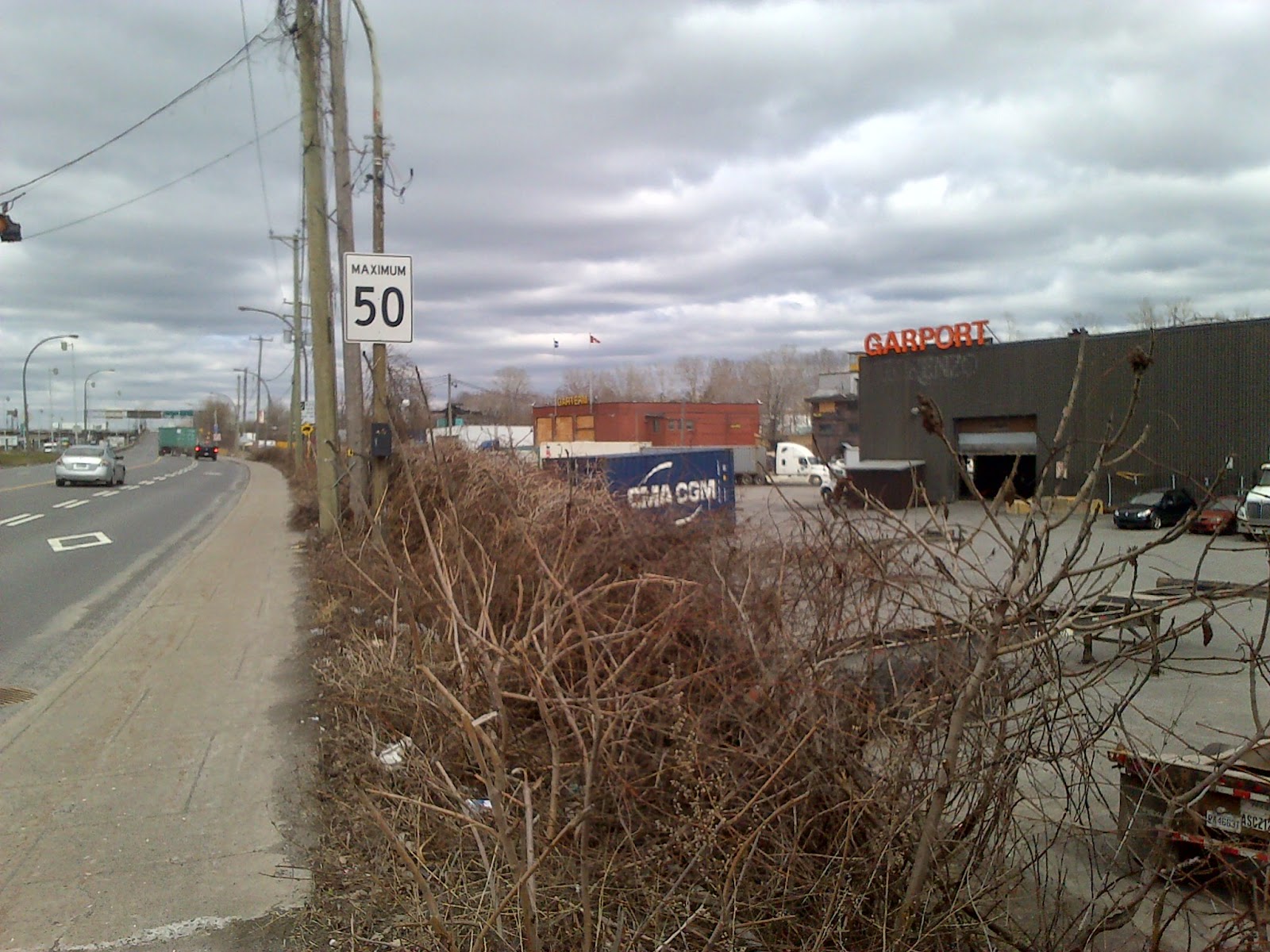