As I’m sure you’ve figured out by now, I’m a big fan of the Square Root of Minus Garfield [Sqrt(-G) for short] and become one of their most generous contributors. The only other ones to deliver multiple comics are Colin Foster, Henning Makholm, Michael Stangeland, NotTooStupid, and Quaternion.

Before Sqrt(-G), I was a big fan of the Garfield Randomizer, of which more history can be found here.

The Garfield Randomizer is a webpage that accesses the comprehensive online Garfield archives, fetching one panel at a time from different individual Garfield strips and presenting them mashed-up and reordered into surreal, dada creations. An instant online hit, screen-captures of the recontextualized comics began appearing on messageboards and blogs everywhere. Of course, it didn’t take long for syndicate lawyers to pounce.

Which is unfortunate, both for fans and for the syndicate’s ailing, unfunny property. The unanimous sentiment online was that for the first time in years, Garfield was funny again. As I mentioned in my recent revision to the Comic Strip Doctor column on Garfield, what makes the randomized strips hilarious is that they break down the rhythms and cadences that readers have come to predict. First panel set-ups become final panel non sequiturs, or a strip may have three punchlines with no setup. Each panel’s utility is boosted by its becoming a modular component.

One thing I noticed, frantically creating new strips for hours on end in a vicious giggling fit, was that there are a lot of really strange concepts buried in the Garfield archives. The comic seems like it should be funny. How could a comic that incorporated wildly bizarre juxtapositions not be funny?

Somehow, Garfield manages. And the secret, it turns out, is through overkill:

Since the Garfield Randomizer went briefly offline, there was an unfortunate crackdown on any sites with Randomized Garfields. The lone exception being the Garfield Generator, for some reason. There was a 4chan board of Randomized Garfields in the morning, and when I returned in the afternoon, the forum was gone. I've always regretted not saving more images from there when I had the chance.

So what is it about the Fat Cat that's so easy to parody, compared to other Newspaper comic strips? The answer may lie in the format itself. As Kleefeld put it:

...The structure of Garfield is generally two talking heads whose dialogue is largely not dependent of the illustrations. Thus, you can drop in any two characters standing next to each other and the gag still works. The strip's format, in some senses, isn't that far removed from the old EC comics in which the text simply explained what was happening in the pictures.

In the second place, the premise of Garfield is that Garfield doesn't actually talk out loud. So, although Garfield is responding and reacting to Jon's comments, Jon's dialogue is set up so that it's also not dependent on anything else. In effect, Jon is speaking a perpetual monologue and Garfield acts as a Greek chorus. For the purposes of these mashups, that means that the dialogue can easily be dropped in to comics with dramatic scene changes, since Jon's comments are, by design, NOT a response to Garfield's.

A lot of the other comic strips which also use the "two character banter" approach that's not reliant on actual character development or visual humor -- Blondie, Hi and Lois, Hagar the Horrible, etc. -- but Garfield's unique structure allows for a greater latitude for interpretation. You can see in the above examples that I was repeatedly able to assign dialogue to characters in other strips in a way that would not have been possible if the original required a back-and-forth set-up.

So it's actually easier to think up a Garfield comic than you think - all you need to do is find some combination adhering to the formula, and you're halfway home! Every time I send in a collection of my strips, I wind up thinking up more ideas for the next batch.

One of the ideas I got, which I expect increased traffic immensely was the Manga Garfield. The finished version is actually slightly different from how I originally wanted to end it. I'd planned to have the last panel of Garfield as the Ghost Cat from Ranma 1/2 yelling "FEED ME!!!" with "Jon's" hair standing up on end with his Golgo 13 expression. But I couldn't figure out how to airbrush Akane & her father out of the picture. Ironically enough, my lack of photoshop skills probably made for a better comic. 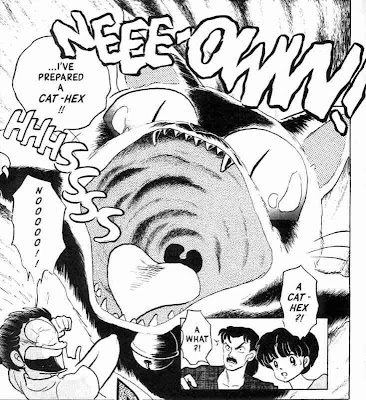 However, as massive as the amount of comics I’ve sent, it’s actually a fraction of the other Garfields I’ve done. I’ve compiled & collected literally hundreds of Randomized Garfields that could guarantee me as a member for life. I haven’t submitted those, because it would be unfair to the others who want to give their comic a try, and it’s more of a Math-based site than anything else. I feel slightly bad that I haven’t given anything equalling a mathematical formula. (Could you imagine Fermat’s Last Theorem as a Garfield comic?) Apart from sending one or two, just to get a feel for the site, the only “Randomized” Garfields I’ve sent are those where just one panel was changed.

Other than the Randomized Garfields, there were several Garfield I worked hard on, then decided not to send them in. Here, you’ll get the chance to see these strips, and my reasons why they were rejected.

After gathering together various strips with the characters wearing masks, it occured to me that despite the similarity in theme, it didn’t follow up to a particularly strong finish. Sometimes just finding similar elements isn’t enough to make a comic funny, and that’s where this failed.

For Better or for Garfield

This was based on an inspiration of one of Kleefeld’s mash-ups where he switched the dialogue of other comic strip characters around. As he put it:

Mash-Up Day is now a time-honored tradition here on Kleefeld on Comics when I can't think of anything comic-related to talk about. I take different comics and switch the text between them to see what I can come up with. (Believe it or not, it's actually sometimes easier for me to do that than come up with my own whatever to talk about.)

However, in doing these, he set a cardinal rule - he only switched the dialogue for a strip that appeared on the same day. Despite it working quite well, given Lynn’s shaky relationship with her ex-husband Rod, I felt it would be unfair to let the rule slide. Not to mention it was a strip that was rerun from 1979, further negating Kleefeld's rule.

This was originally going to be a revamp of the legendary Crumb comic character, with dialogue from the most “risique” Garfield comic. However, this proved to be incredibly difficult, and the above image shows why.

Like any of Crumb’s works, his drug-fuelled characters have a tendency to ramble on and on. It makes for amusing reading, but is hell trying to reuse. Not to mention Fritz is constantly talking to other animals and is rarely by himself.

However, I was able to use this idea for another underground comic. I won’t say which one, but you should find out in about 3 months or so. (Taste the suspense!) 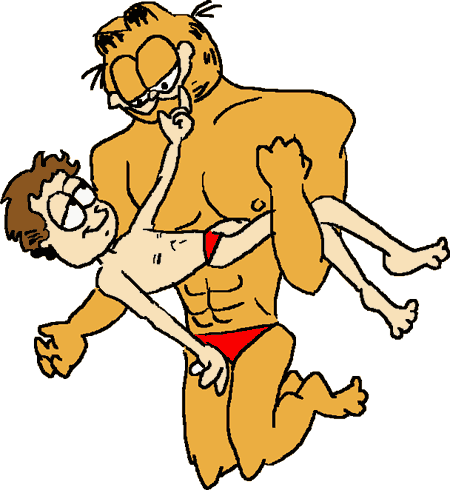 This wasn’t mine, but I found this image in a SomethingAwful forum, talking about FBOFW, of all things.

The contributor, Polyunsaturated Cats posted this picture with Garfield & Jon in their obvious Seme & Uke (Top & Bottom) roles. This brought up disturbing questions about bestiality & the like. Of course, this happened a month before Liz started dating Jon.

Once it has been seen, it cannot be unseen...

Actually, this WAS submitted, but the moderator declined to run it, for fairly obvious reasons. He said that I was the second ever rejected comic. (He hesitated to use the word “strip”...) This led me to wonder what the first rejected comic was.

I was working hard at this, when it occurred to me that I was working too hard at the set-up for what was a very obvious finishing line. And it was getting long enough already. Not included are the speeches about how Garfield would never conquer the world. He came very close, but that was as close as he ever got. While he was lazing around, Manga swept in and stole his popularity, and also emptied his Swiss bank accounts when he wasn't looking. (Just fit all that in between when Garfield sees Cerebus’ “true form” & the last two panels)

Also, like Fritz, Cerebus isn’t a particularly easy character to use. Unlike Garfield, you have to be VERY selective about which panels to use. He’s not by himself that much. In the end, it lost momentum due to sheer workload.

As much fun as it would've been to see the moderator try to type the wall of Biblical text, I also felt that another comic did this theme much better.

This is the biggie. Not quite as brutal as The Rise of Arsenal, but it’s pretty close.

This was one of the lost What’s Michael? strips, and I thought the tone was on par with Fletcher Hanks. I was working hard at finding the appropriate stock phrases reminiscent of Hanks’ comics, when it occured to me that this was no longer a Garfield comic. It was a Manga about a tabby cat, but apart from that, there were no Garfieldisms about it. But the idea was still good enough that I felt compelled to complete it.

Also, for those of you wondering about what was in the large blank spot where the teaser is, that space was originally left blank. At least this answers the question of who was that mysterious man who questioned the wisdom of cats dancing to hide their mistakes in the "first" What's Michael? comic.


Well, that's the last of my rejected comics, at least until the next batch of comics I decide aren't good enough for Sqrt(-G).

My true motivation for doing any Garfield mish-mash is not just to point out the similarities I’ve found, but also to indulge the imaginations of others. If one of my strips has done something to increase the brain cell activity of a reader, then I’ve done my job.

This is something I feel has been missing from Animated shows since the 80's. If there was one common element that Garfield & Friends, Muppet Babies, The Real Ghost Busters, Disney's Gummi Bears, and Tiny Toon Adventures had, it was the use of imagination. Nowadays, the closest we've got for that is Yu-Gi-Oh!, which is basically CalvinBall with cards. Think about it...
Posted by DeBT at 3:32 PM