Garfield at his Most Serious


As safe and stale as Garfield's been well reputed for, there's been a strange history of all kinds of weird and experimentative versions of the franchise cat venturing into unexplored territory.  From the infamous week of Halloween strips that was said to be influenced by Valse Triste, an animated musical interlude of a halucinating cat remembering life in a diplidated house...

...to the story Primal Self in His 9 Lives where he embraced feral memories long since forgotten... 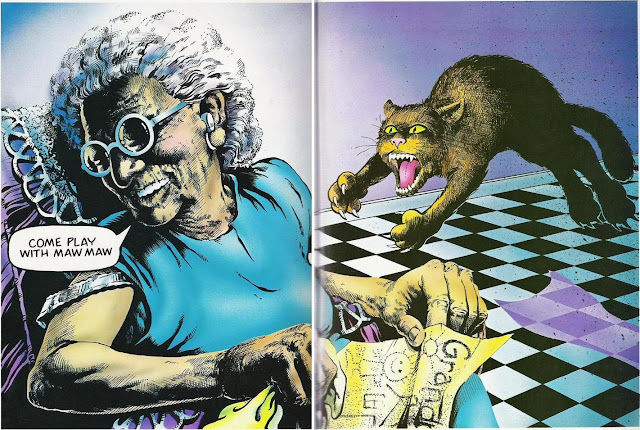 ...to the Unabridged Uncensored Unbelievable collection of rejected strips considered too hardcore for the main newspaper comic.  (Though they're nowhere disgusting as the collection of Rejected Garfields from the Trash Bin) 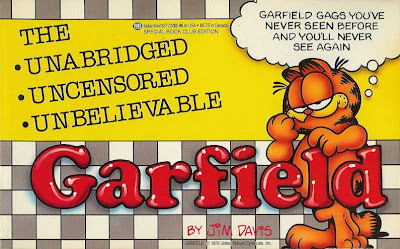 But so far, none of these attempts have matched the heights reached in the first decade when Garfield was at his creative peak: the abandoned proposed Garfield movie; Judgement Day. 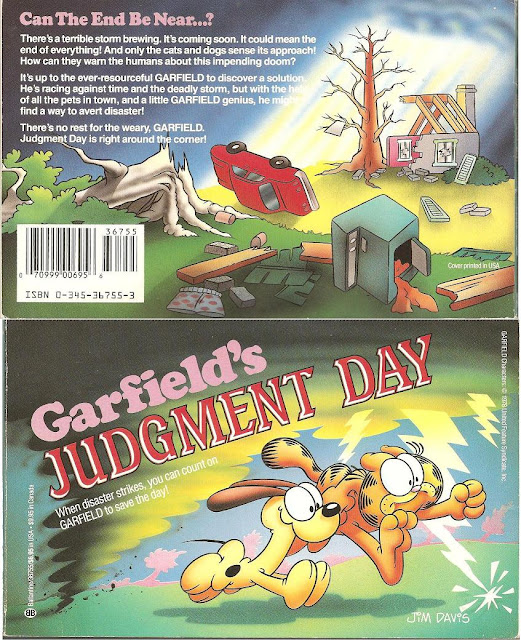 Lest anyone think that this is an aberration, keep in mind that all of the previous traumatizing comics that were described earlier were all written by the same man, Garfield's creator Jim Davis.

One of the things that I was worried about when my tape broke during my copying process was that I wouldn't be able to acquire the lyrics to the abandoned project that was previewed on Garfield's 10th Birthday special, which gave various clips of the upcoming Garfield & Friends.  (That, and a certain Domino's Noid commercial)  For anyone who doesn't want to wait for the relevant clip to show up (around the 40 minute mark), here's the lyrics as performed by Lou Rawls and Desiree:

No beds to make
No bills to pay
Yeah, every day's
A holiday

(Chorus)
We got it good,
and that ain't bad

(Rapid tempo)
We don't waste no energy chewin' the fat
We got it made,
Why deal with that?
No homework due
No dates to keep
We wake up slow
We eat, we sleep

No worry of security
Youth or maturity
We do as we please.
No headache, no tension, uh-oh,
Except the occasional fleas.

Presumably, shortly after this song of idyllic life, we get a shot of tension of an upcoming disaster that only animals can detect with their 6th sense.  Part of the problem I had with Judgement Day is that after two pages of familiar setup with Garfield waking Jon up and creating a mess in the kitchen, we're suddenly introduced to twin toy terrier dogs in a large Italian family of five children and a crotchy old man being abusive to his faithful dog.  These transitions didn't come easy for someone not used to an expanded unexplored universe in the rather limited Garfield world.  Not to mention that except for a select few scenes, the overall tone is more dramatic, suspenseful and nervewracking than actually funny. 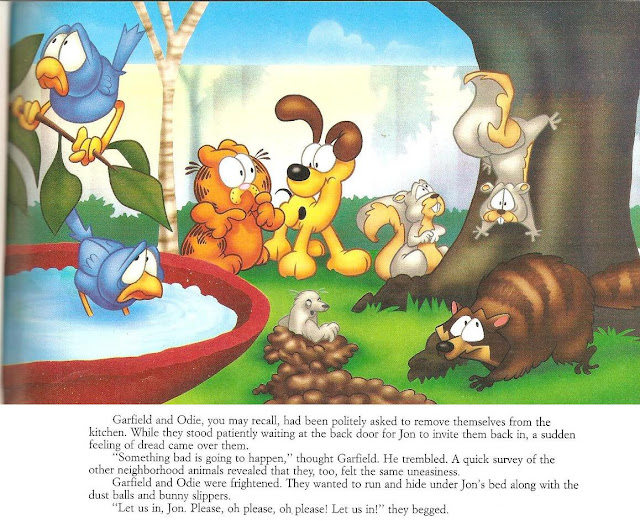 While these extra characters gave the story a larger scale not restricted to just Garfield and his surrounding neighbors, it still came out of left field.  The basic plot for Judgement Day is nothing less than a disaster movie where all the pets are aware of a catastrophic storm of biblical proportions that threatens to level the whole town.  Faced with this impending danger, it's brought up that the most suitable way to warn their owners is to break a long-standing taboo and actually talk to them like a human being.  Garfield is alone in this proposal until his girlfriend Arlene speaks in favor of his move, and from there, the floodgates are opened and all the animals are animatedly talking.  (Probably what would lead to another musical number)  In retrospect, I'd much rather that the Garfield strip focused just as much attention to Arlene's relationship with Garfield as Jon's sudden romantic success with Liz.  Arlene is the only animal not afraid to give Garfield some gruff feedback for merciless teasing and outright rudeness. 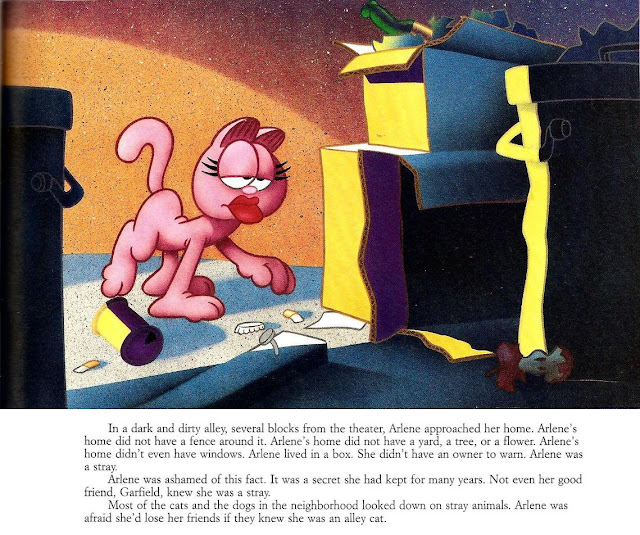 As informative as Arlene's stray status is, it's difficult to imagine how she would've revealed this private part of her life without resorting to a musical number or internal monologue.  One alternative could be a montage of her being around other pets looking down on strays and reluctantly agreeing with their assertment.  It would be tricky but doable.

A certain minor subplot that's mentioned is a common complaint that all the dogs who have dots on their bodies, save for Odie, were named Spot.  (Ironically enough, Odie was originally going to be named "Spot", until Mort Walker pointed out the common name was used in another strip)  If this event were going to be expanded on, it would be in the theater where all the residents are huddling for the storm to blow over.  One last thing that deserves mention is the closest tribute to Lorenzo Music, Garfield's main voice for the specials and TV show.  Of the trio of punk dogs who don't think much of anything but upsetting garbage cans, one of the dogs just happens to be named Lorenzo. 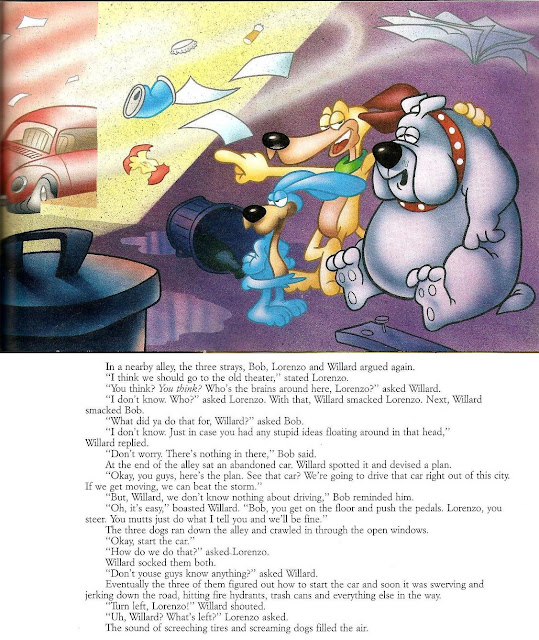 Obviously, funding for this project is no longer feasible, even though the voices have been recorded.  But there's nothing to prevent fans from making their own comic version of what they'd imagine the film would look like.  At the time, I thought it would be a great accomplishment if Garfield fans worldwide pooled their efforts into creating a comic version of Judgement Day that wouldn't be unlike the compilation of Star Wars tributes.  But the more I thought about it, the more I realized that my idea would be (literally) akin to herding cats.  There's so many different creative paths and interpretations that could completely derail the comic.
What would be needed is someone with a specific controlling directive force that would make such an ambitious vision a reality.