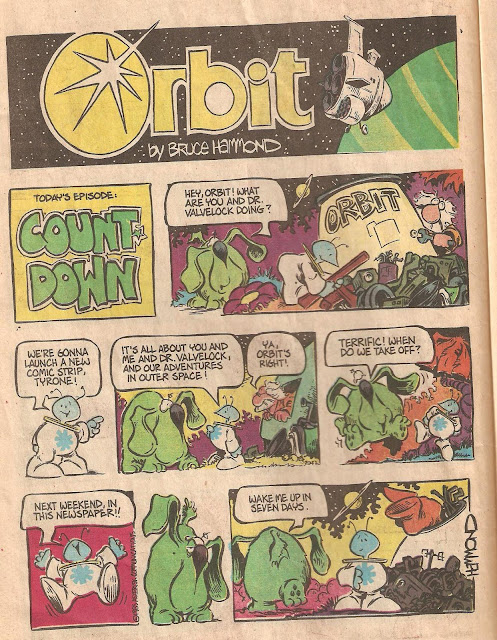 Earlier this week, I got a proposal from a commentor who offered to scan his personal collection of Orbit dailies that he'd clipped out in his childhood. I suggested that he post his weekday comics on his site, and I post the Sunday comics on my site. He readily agreed, and has just recently founded his Orbit Project here. 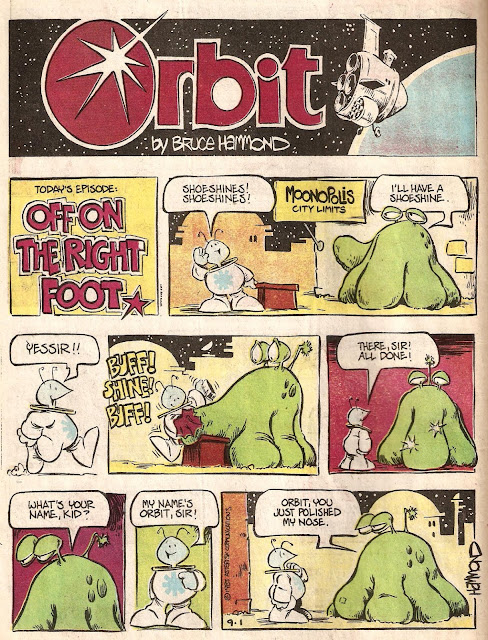 This is a joint operation between two modest Orbit fans who're hoping to increase the size of our current collections. This is the kind of thing I'd been reaching and hoping for - to contact and communicate with other newspaper comic fans who have fond memories of the comics they read in their childhood, and collaborate together to create a more comprehensive collection. If there are any Orbit fans out there who'd like to contribute, be our guest. 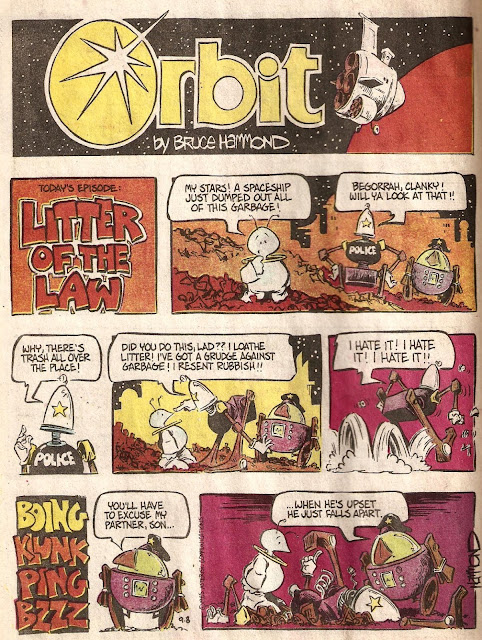 Now if there could only be something similarly done to Graves Inc... 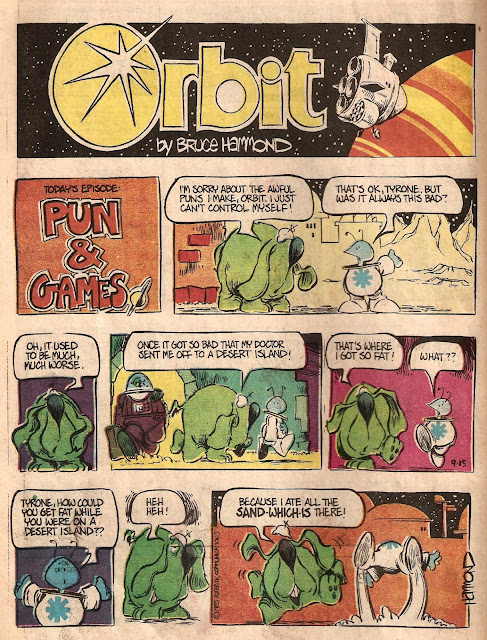 As of now, there's only a select few comics on the main page, along with some fan art, a promotional contest ad, and three comics found via an online newspaper microfiche archive with the highlighted search results paintbucketed out. If we could figure out how to access their backlog, we could exponentially expand our collection further, since the Sunday comic continues off from where my last Orbit comic ran out.

EDIT - there are now the first two months of dailies on the site now. The dailies really help fill in some of the holes from the Sunday comics. 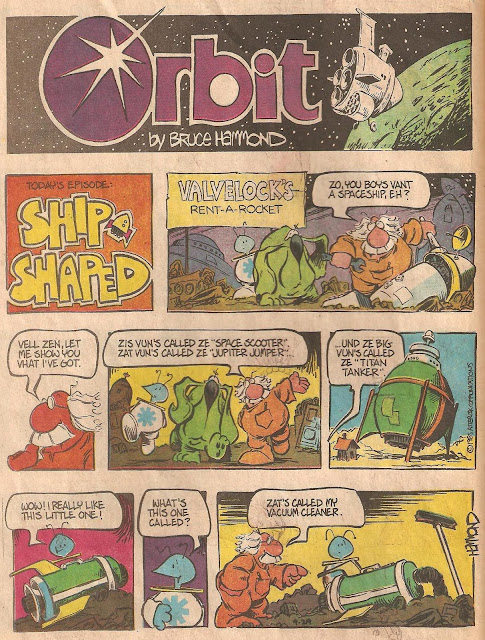 I'll be posting a few more scans that haven't been seen, along with the ones that have already been posted before so they'll appear in chronological order. But I'd like to pace out the remaining Orbit comics in conjunction with my other perceived future topics so this site doesn't remain Orbit-centered. On the plus side, once I run out of Orbits, there's still plenty of Duffy comics by the same cartoonist that I haven't shown yet. I'm sure you can guess what I'm aiming at for here... 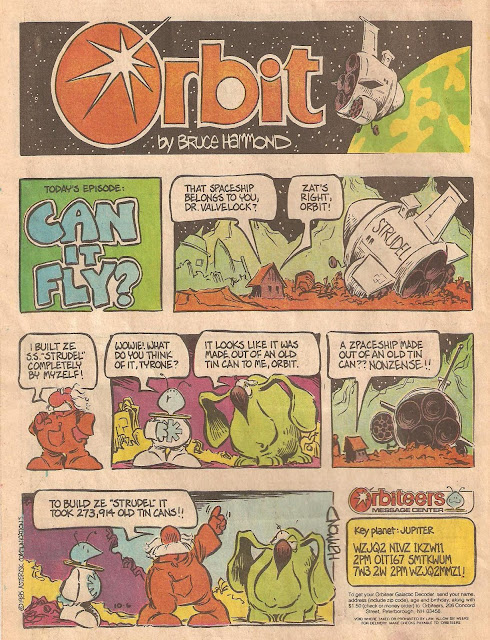 The deteriorating condition of Dr. Valvelock's ship would become a reoccurring theme, very similar to Spaceman Spiff's constant crashing down upon alien planets. It could be said that it might be safer for Chakotay to pilot the ship himself. 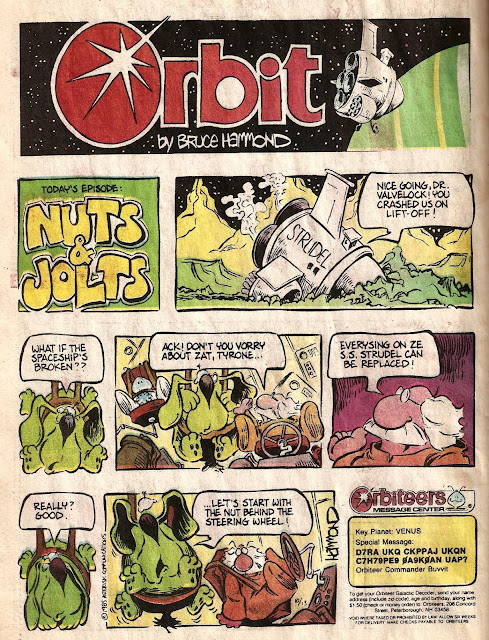 Another feature I liked about Orbit were the various aliens that would appear briefly. 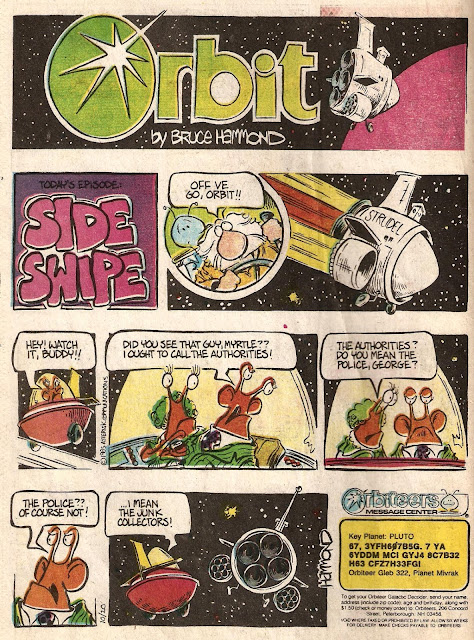 This is one of the rare Orbit comics I have where the throwaway title panel isn't included. One the one hand, the use of extra space helps focus on the above and below panels, making it more dramatic than usual. On the other hand, I have absolutely no idea as to what it could've been named. Pretty much every Sunday Orbit comic had a condensed two-three word summary that would perfectly tie in and fit whatever was going on. Any takers? 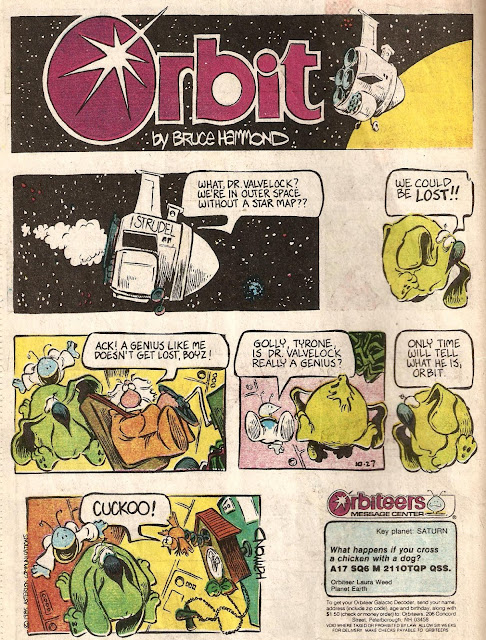 For all the visual imagination shown, it should be pointed out that Orbit was very much a children's comic, as these two strips show. 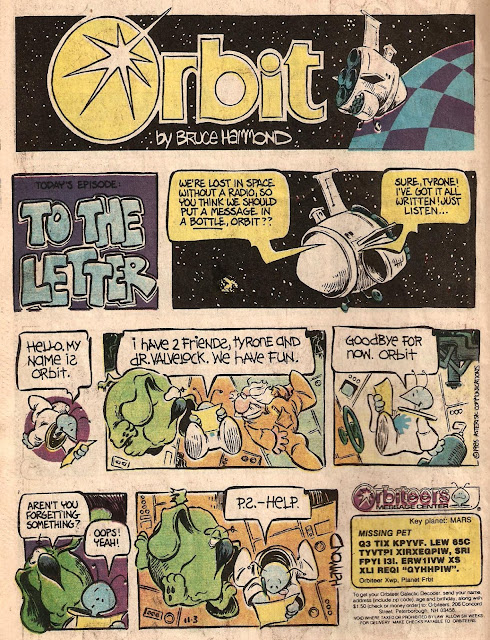 If there are any potential undiscovered Orbit fans out there who'd like to contribute, feel free to do so. And if you're one of the few who's looked back on this strip with rose-coloured glasses, don't feel ashamed. We've all had our little interests with childish things that we've later outgrown. Even now, you're probably wondering why today's children enjoy the stuff they watch and read when yesterday's stuff was clearly better. 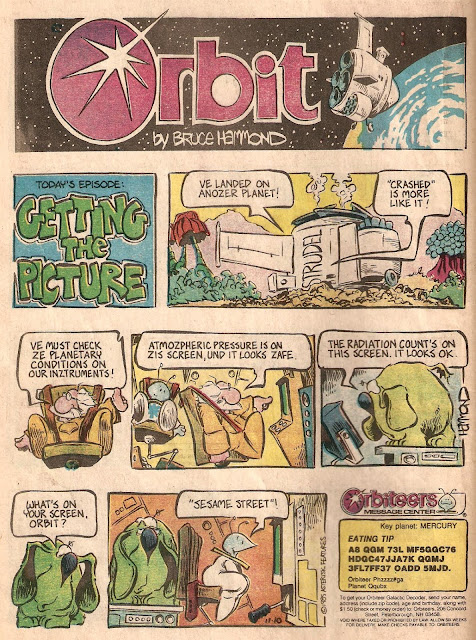 Okay, I have to admit a certain fondness to 80's Saturday Morning Cartoons, such as Gargoyles, The Real Ghostbusters, Beetlejuice, Garfield & Friends, Alf Tales, Gummi Bears, Muppet Babies, Tiny Toon Adventures and all kinds of weird shows that would never get past the production board today. It's children's lack of knowledge of these legendary shows that makes us lament for the "good old days". Things would be simplified if they were rerun on cable channels, but who has the time and money, as well as the rights?

Go out there and find some Orbit comics and send them here! Contact garsspace at rocketmail dot com for more details.
Posted by DeBT at 5:24 PM