Haven't we seen this Before?

It's no great secret that comics have a tendency to repeat themselves the longer they're in syndication. There's only so many new ideas that can be pumped out before the well gets dry and the creator falls back on old concepts that were introduced way back then. Chances are that if the audience hasn't obsessively followed the strip since the beginning and commited every comic to memory, they won't remember. (Especially if they're showing new comics to a new generation) In some instances, they'll retell an earlier joke by using fewer panels or dialogue. In others, they'll expand on an idea that was originally a small concept. Some Legacy strips go even further and reuse entire panels entirely, by replacing the text with new dialogue. Who can forget BC's letters across the ocean to a more advanced civilization? 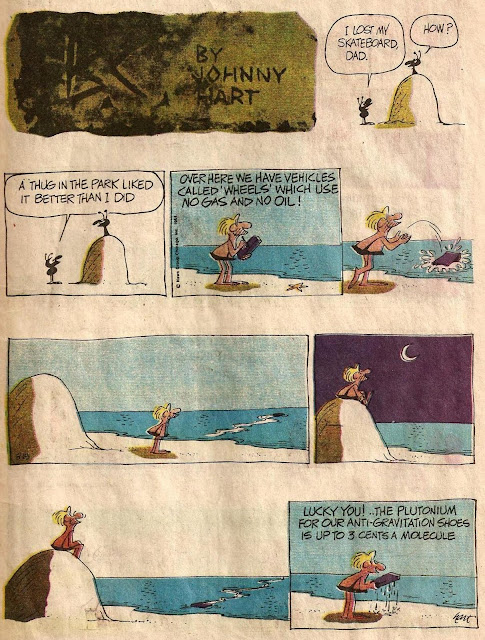 With the exceptions of a few variations, every strip with this theme was basically the same. However, BC wasn't the only strip to do this. Hagar used a different concept by reusing a past Sunday comic by rearranging the panels to tell another joke. 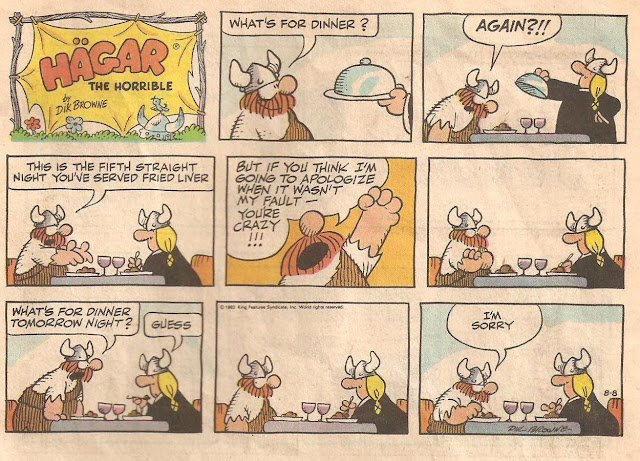 However, when it comes to reused Sunday comics, The Wizard of ID takes the prize. 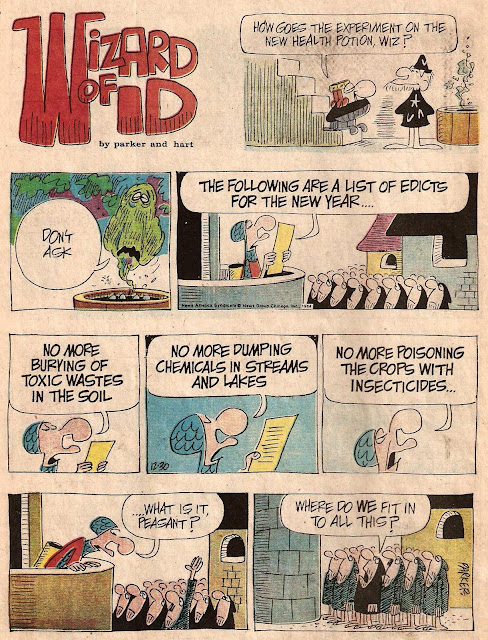 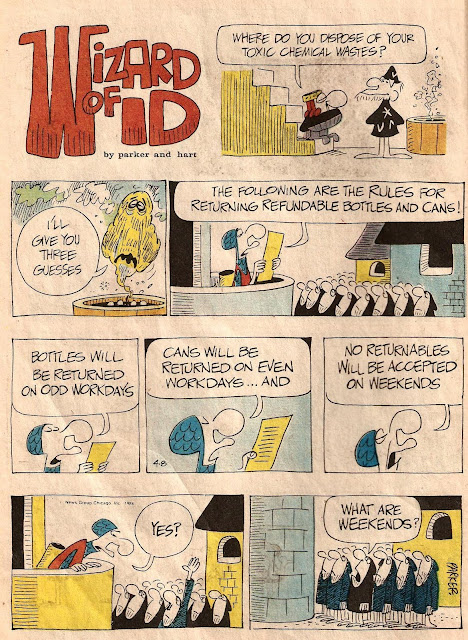 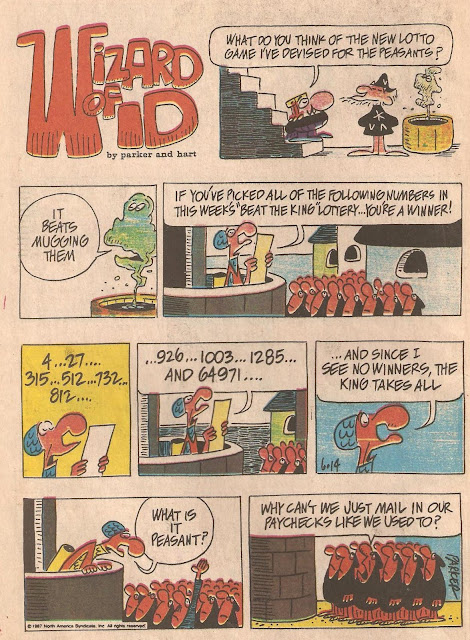 Sharp-eyed observers will notice that the throwaway panels in the 2nd and 3rd comics above are exactly the same. It's understandable to use the same poses over and over if the character designs are consistent throughout. It makes it easier to reuse old panels rather than redraw new ones when you've got old comics that'll do the job properly. But is it really that difficult to think up new dialogue? Since these kind of comics can be reduced to "fill in the blanks" strips, its just a matter of imagination, and creators in a rut aren't likely to show bouts of spontanity and creativity. Except sometimes... 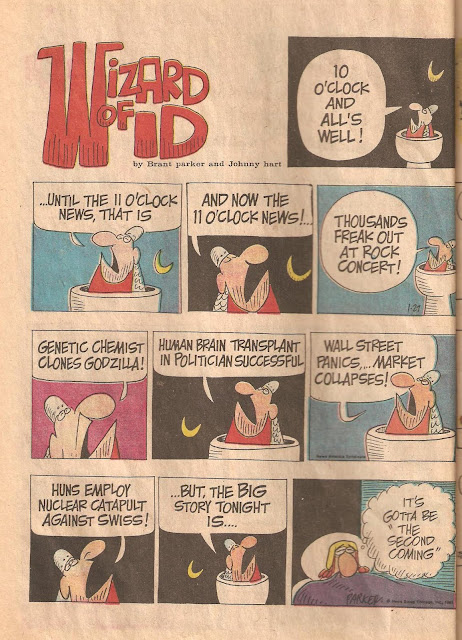 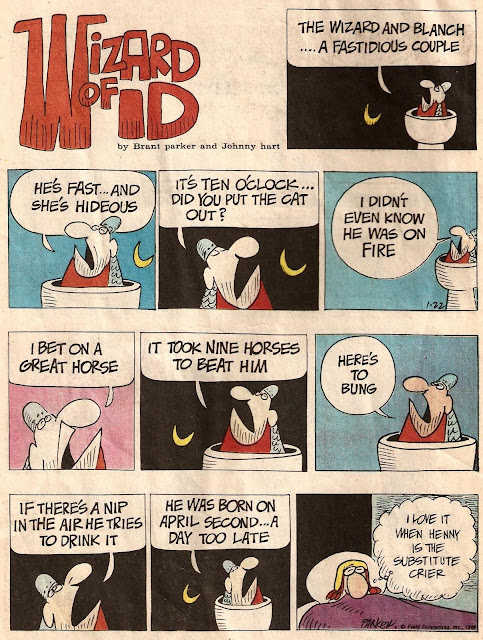 Then again, maybe I shouldn't be so harsh on Brant Parker for resorting to easy shortcuts. Children love repetition whenever they can catch it (they ask for the same story before bed hundreds of times) and it gave me the incentive to make comparisons with similar strips and see the differences. 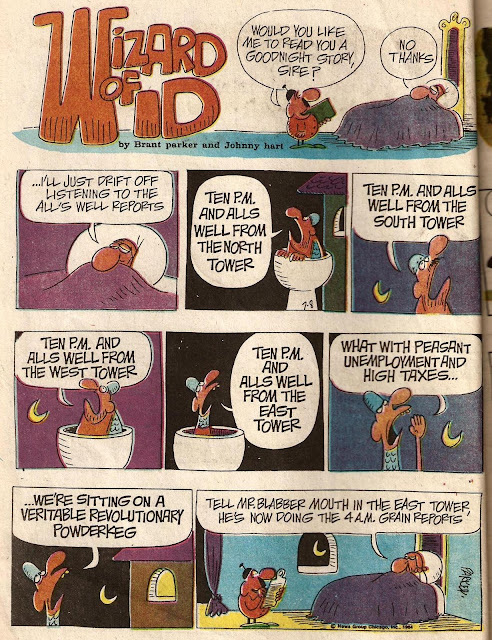 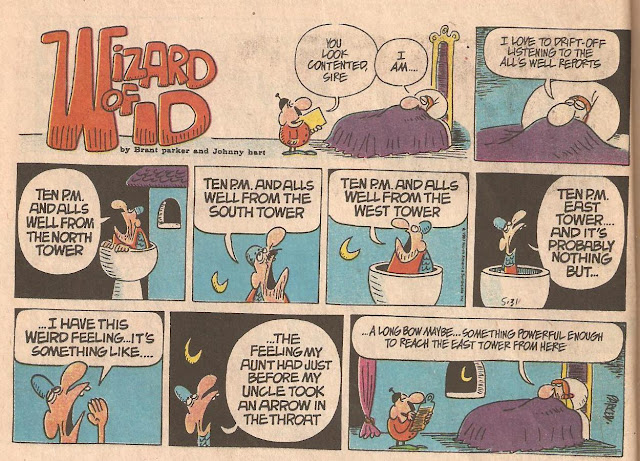 Amazing as it sounds, this isn't even half of the similar Wizard of Id comics that I've found. Unless anybody objects, I'll be be posting more instances of self-plagiarization for the rest of the month.
Posted by DeBT at 9:26 AM