It's that time of year again, when the Gregorian Calendar is down to its last page, and we're faced with the prospect of having to get another replacement with cutsey cartoon characters, hunky supermodels or fuzzy animals gracing the months to come. Much like how Canadians are always caught flatfooted everytime it starts to snow in winter. We like to give ourselves a certain mind-blindness to the obvious, even as Global Warming has somehow convinced us that maybe this winter won’t be as bad as the last. And then the first flakes of snow starts to fall, and everybody’s caught in a traffic jam because we all decided to wait until the last minute to put on the snow chains of our cars, since we were confident of our driving ability to navigate through ice-covered roads. Right on cue, when we hit the tiniest lack of traction, we develop sea-legs, causing a traffic jam that goes on for miles.

Oh, and doing Christmas shopping too.

Likewise, the end of the year is also a time to get focused on our year-end cleaning up the house, to make room for all the relatives who’re going to show up for the New Years Party. One of Murphy’s Laws is “Any horizontal surface is soon pilled up”, and nowhere is that proven more often than our house. If there isn’t any platform that’s not the floor, chances are it’ll be swamped with newspapers, books, hastily written down notes and/or food. After 11 ½ months of procrastination, we’ve got to get some serious cleaning up done to fool people into thinking that we’re not slobs when nobody’s looking. 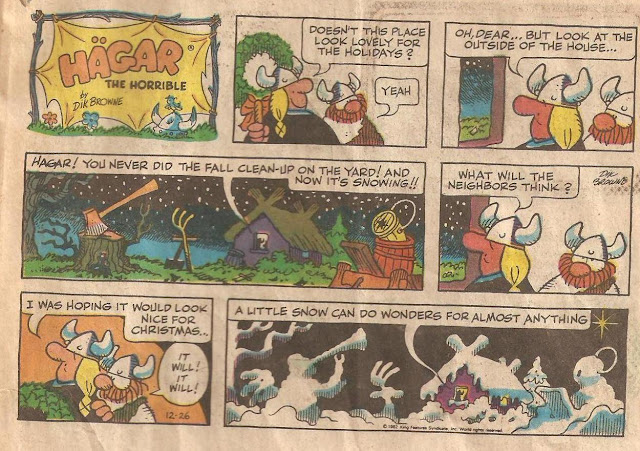 On the free time side, we're given the option to wallow in nostagia for a time when Christmas Specials reveal their heads for anybody who forgot them within the span of 11 months. Many of which were created decades ago, and haven't been up to snuff to the most recent attempts at producing quality holiday shows. Just compare the absymal 3D Scrooge movie to the woefully underappreciated and almost forgotten faithful adaption of a Christmas Carol. While Richard Williams gave the film its distinctive look, Chuck Jones was the executive producer, which is made even more impressive since it isn't animated in his house style of the Grinch or his WB shorts that made him famous. The fact that it has some disturbing scenes and runs for 25 minutes could explain why it isn't a Christmas staple after all these years. The length would cut into the remaining time needed for advertising, and isn't that what Christmas's all about?

Of all the comics I've talked about here, Duffy's the one that's gathered the most posthumous comments without any prompting on my own. So it seemed appropriate that I share one more relevant comic featuring him. I might do some more scans about him if interest continues to build up. 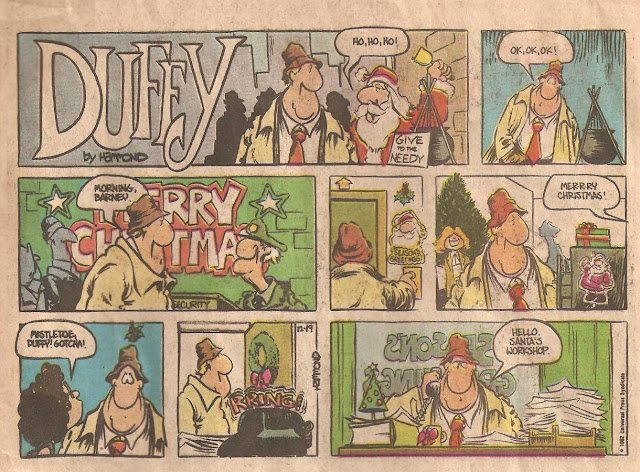