Despite my previous concerns, it seems the latest For Better or for Worse omnibus collection will be reprinting the new-ruins that's been showing up alongside the earlier strips. 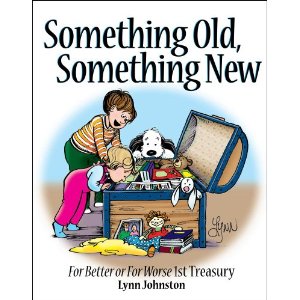 This is slightly distressing for me, because although it seems to gather the majority of the legendary Newspaper strip, it also lumps together Lynn's creative output when she was just starting out with her creative downfall at the end of the strip's declining years. I'm frankly amazed that there are people out there who simply can't tell the difference between a strip 30 years ago, and Lynn aping her style back then, 30 years later. There's all kinds of visual clues that are missing, such as the stiffness of her characters, multiple panels, and the extensive use of words.

Not to mention there were Sunday comics that were obvious retreads of earlier jokes, only horribly misunderstood. Can you understand what's happening in this strip?? 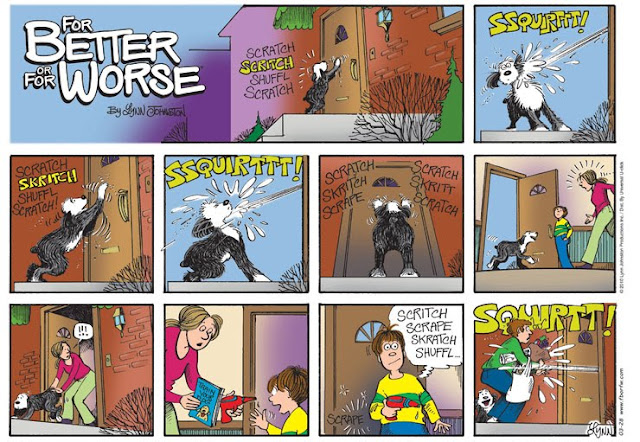 There are several reasons this doesn't work:

1. How did Elly open and close the door & squirt Farley without the dog running in the instant the door opened a crack?
2. How did Michael open the door if Elly was "Palov training" Farley in the first place?
3. If John was scratching the door, why is he further away than he should be?
4. Why would Michael squirt at his father without further prompting?

More expressions of incomprehension from forworse is better expressed:

I had to spend far too long reading this strip to understand what was going on. Farley scratches the door and gets sprayed. Then we see Mike opening the door, so I assumed that Mike had been spraying him with a water pistol. Elly rushes over to the door, so obviously she hadn't been nearby, reinforcing the suggestion that Mike was at fault, as does the following panel where she seems to be lecturing Mike ("!!!"). Then she handed him the water pistol and book and lost me completely and I had to start the strip again. Who had been squirting Farley in the first place? Mike was near the door, Elly came running...was there a lengthy lapse of time between the second time Farley was squirted and when he scratched the door and Mike answered? Why does John scratch at the door? Is it because he still doesn't have his keys back from the car wash? Why can't he use the doorbell? Why did Mike open the door and squirt John? Wouldn't he have recognized his father when he opened the door? Did Elly (or whoever) open the door to squirt Farley or just squirt through the letter box? Surely a dog would have been quick enough to get past her and into the house if she opened the door. Why has Mike back-combed his hair so much in panel 8? Why? Why? Why?

Aprilp_Katje put another reason why the comic didn't work:

You know what else bugs me about today's strip? Lynn is lifting this whole motif from when Edgar was a young dog. He kept scratching to be let in, and Elly et al. were trying to teach him to bark to be let in. In fact, they put Farley out with him, hoping that he'd teach Edgar to bark (but Farley promptly fell asleep). John ended up putting carpets on the doors to protect them from the scratching. Then Edgar figured out how to use the doorbell, and John installed one on the inside, so that Edgar could use it to let them know when he wants to be let out. Shortly after that, he figured out how to bark to ask to be let in and out. Lynn can't even keep straight which dogs have which quirks.

The biggest reason for failure is that it was based on a better strip that Lynn had obviously forgotten:

As HowtheDuck put it, the collection seems to be a way to even out the amount of work she'd done, from a 28 1/2 year output to an even 30 year number. In other words, the latest strips were not to "fill in the creative blanks" as Lynn put it, but rather to "fill in the years". Instead of answering any questions, we got abortive storylines such as Deanna's sudden disappearance and reappearance, and Lawrence's insistence of using a particular bathroom (a shout-out to Christopher only wanting to use his own potty).

Thankfully, she seems to no longer be doing new comic strips, and will only be doing the covers for the book collections from now on. The newer strips were becoming such a visual cancer on my eyes they were literally painful for me to read. It was a testament to how far Lynn Johnson had fallen, and should've quit 10 years ago when she still had something to look back on.
Posted by DeBT at 1:37 PM