It's not unusual for cartoon characters, once they grow popular to stop doing their bad habits so as not to influence younger children.  Like so many others, Broom Hilda had a tendency to drink beer and smoke cigars in her early strips.  But sometimes it takes time for other bad habits to completely fade away, especially if they're in the realm of visual slapstick.  One of the things that seems to have been phased out recently is that she was capable of crash landings that would make Launchpad McQuack proud. 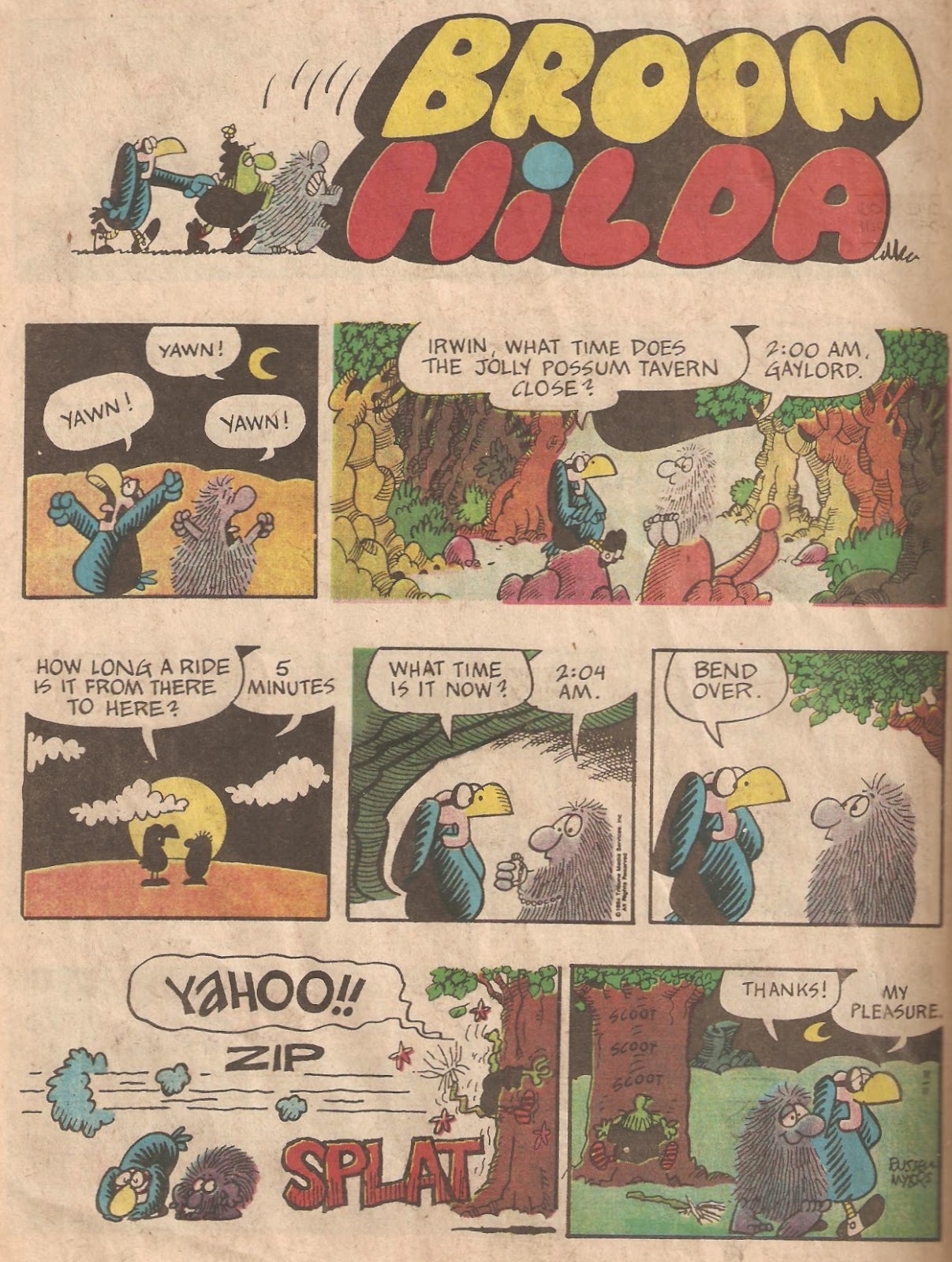 Even though she no longer drinks beer onscreen, that's possibly a facade.  It's subtle, but the basic gist that the reason Broom Hilda keeps crashing is because she always does a lot of drinking (partying) before flying home.  There's simply no other way to interpret it. 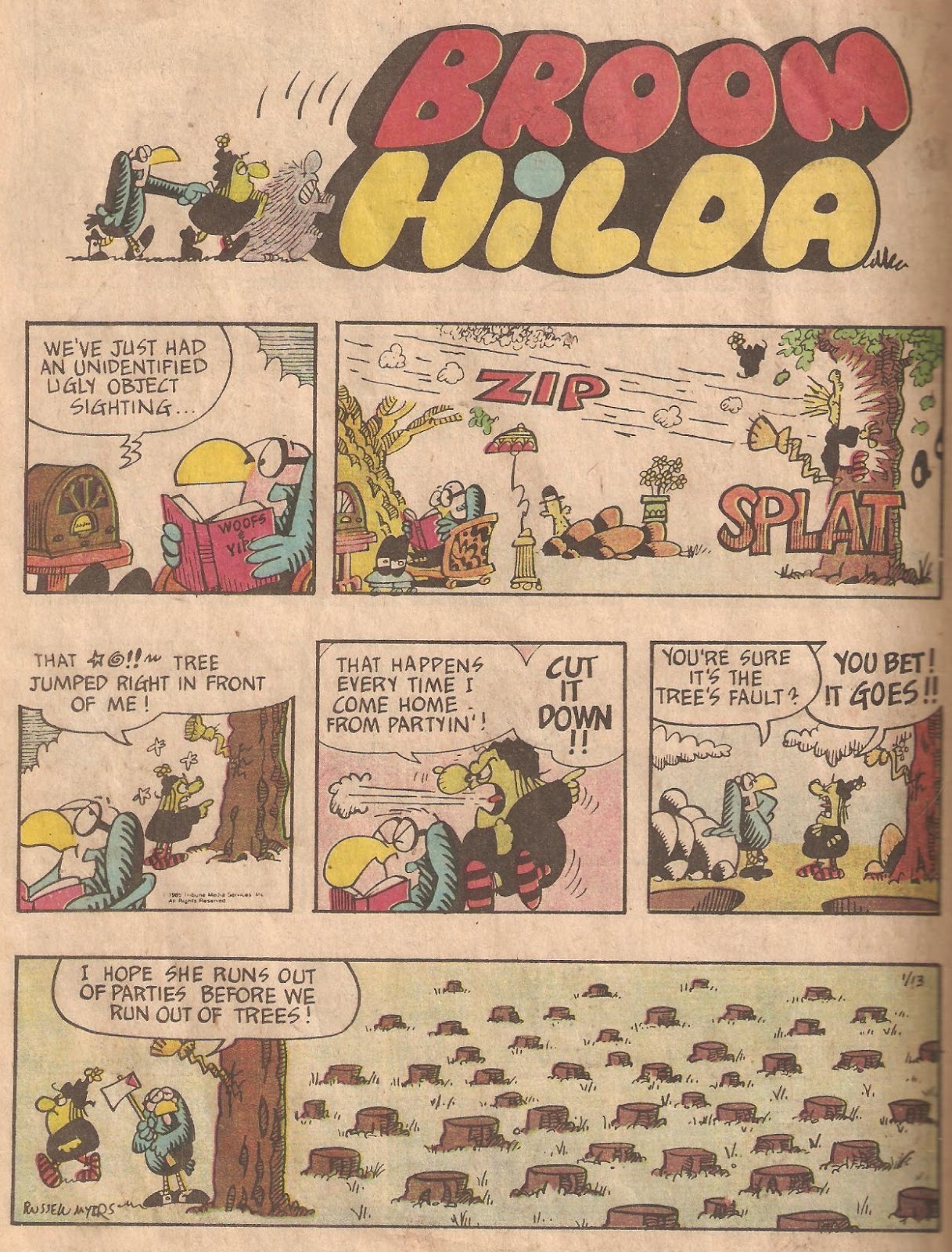 Also, like any drunk, the problem is always somebody else's fault, never their own. 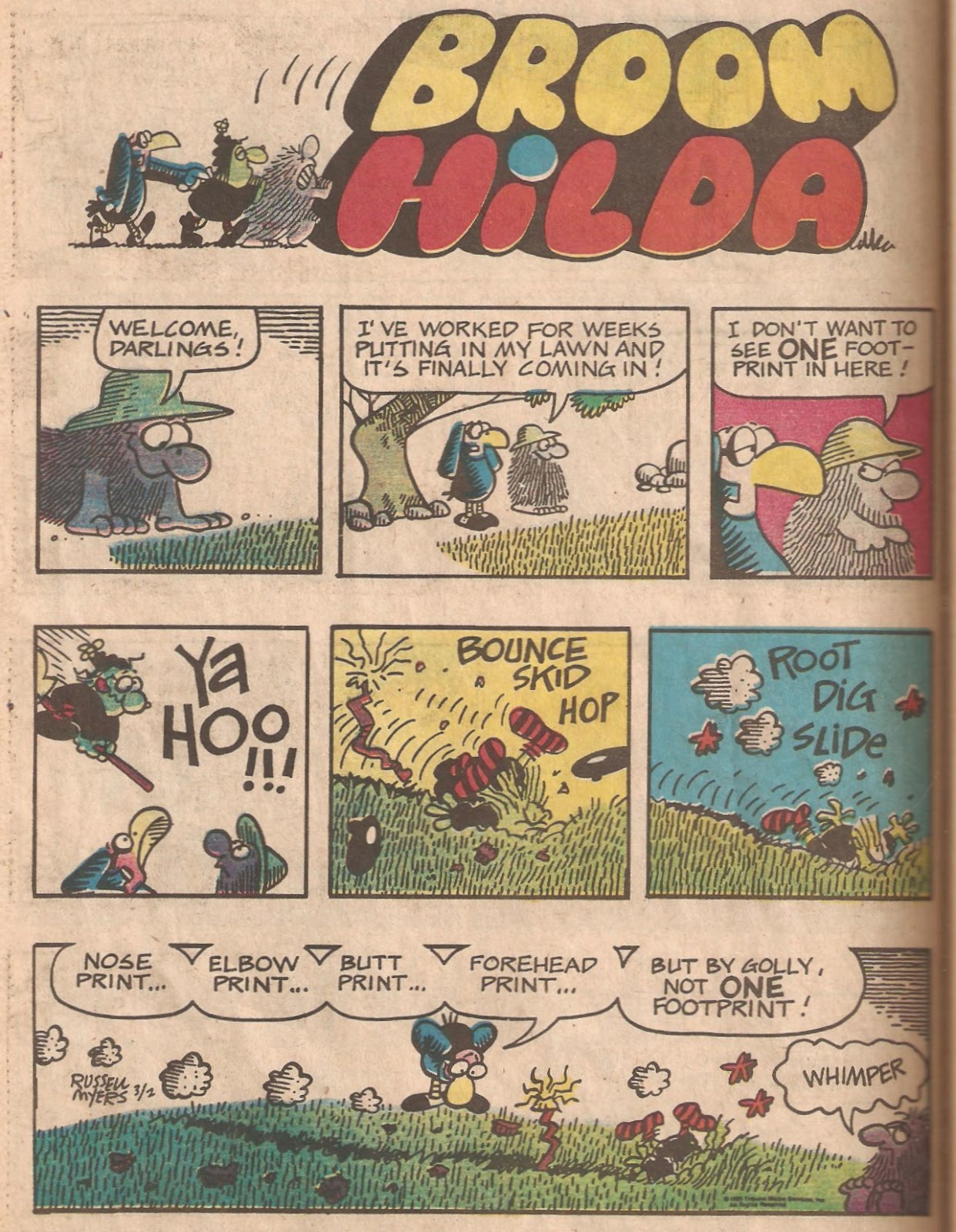 Douglas Addams described flying as aiming at the ground and missing.  In this Broom Hilda fails spectacularly. 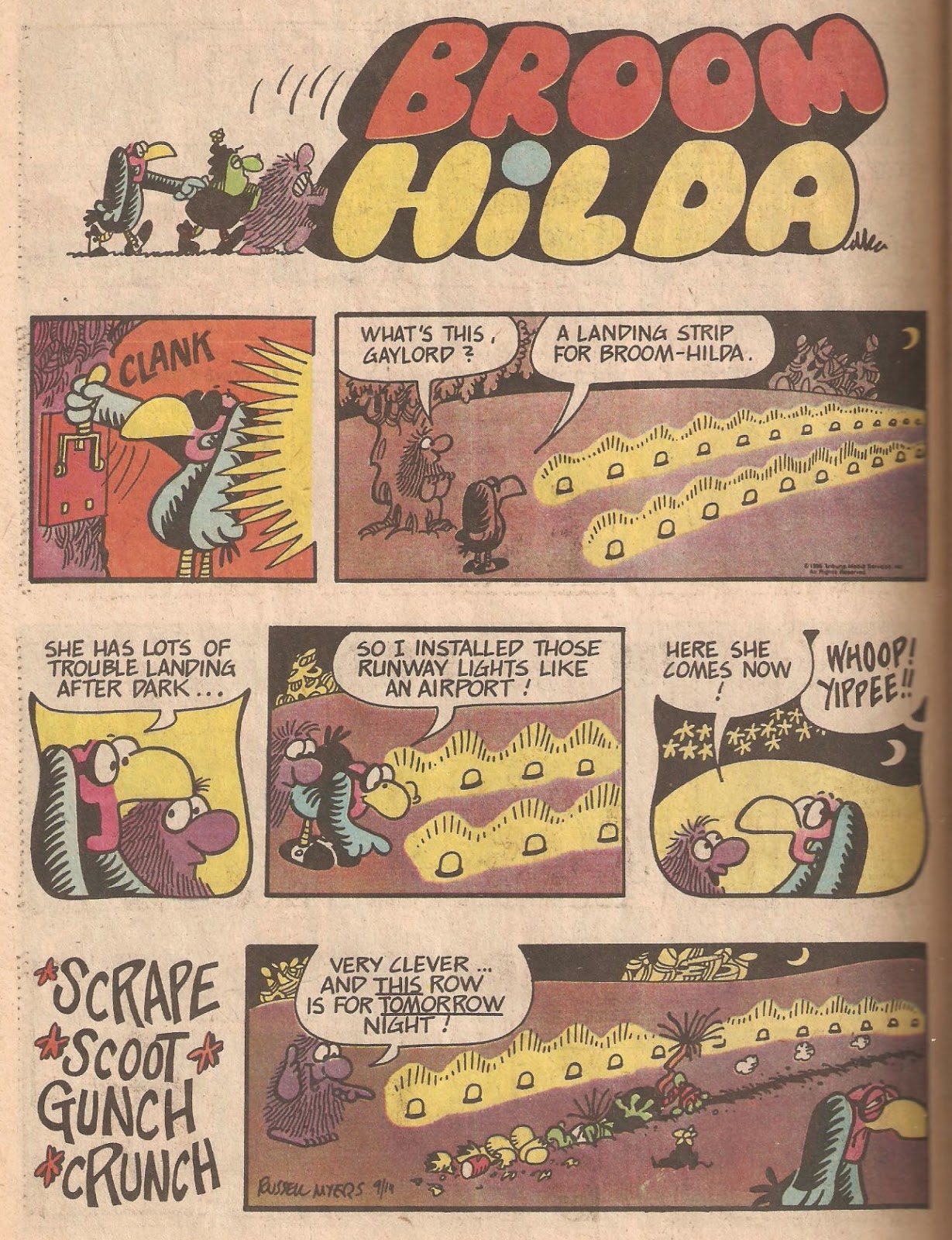 Even her friends attempt at intervention (not actually standing up to her and convincing her she's got a problem - they don't want to be zapped into oblivion) don't amount to much. 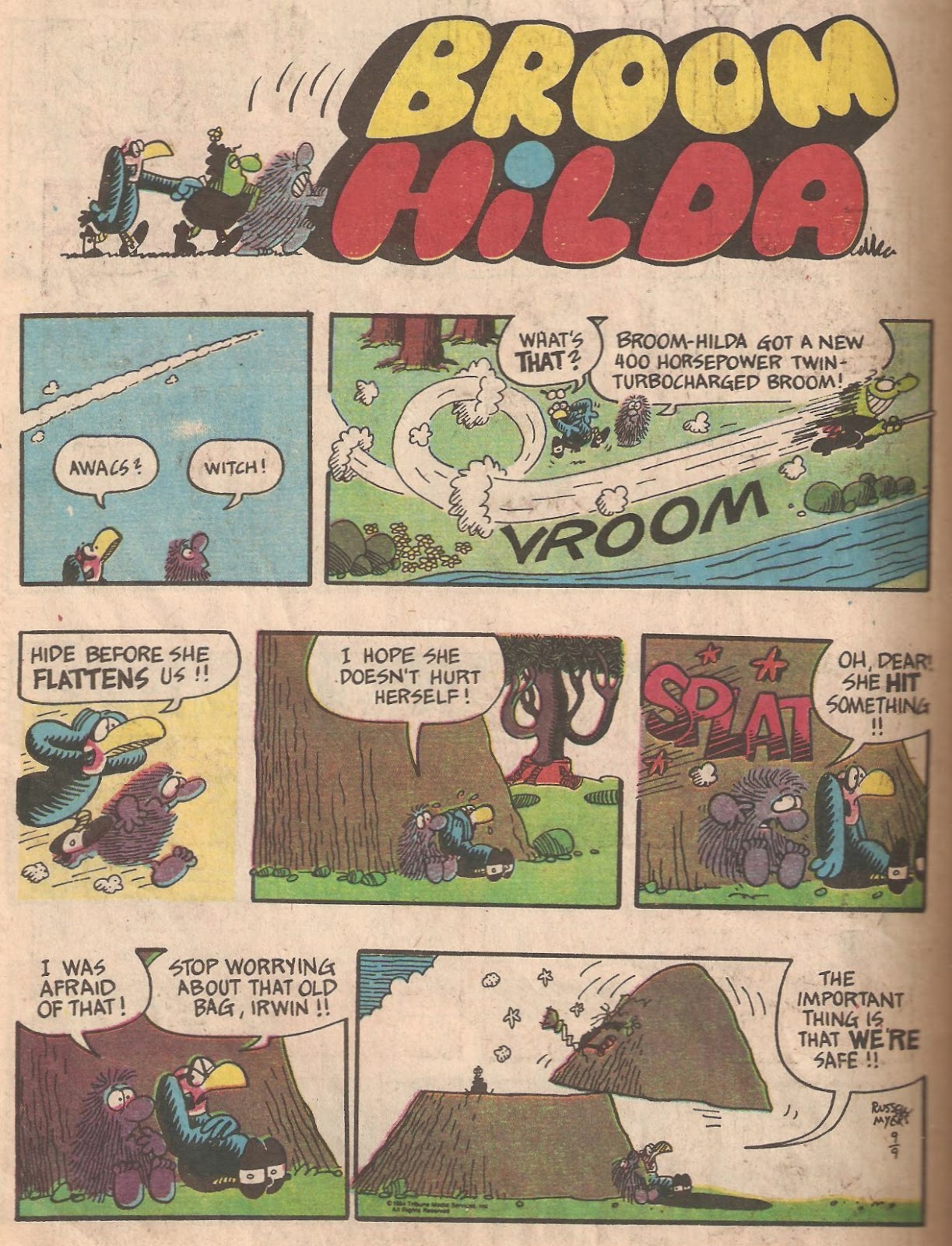 You'd think that a broomstick rider with a high record of drunken crashing into mountaintops would be hesitant to ride along with her, but that doesn't turn out to be the case. 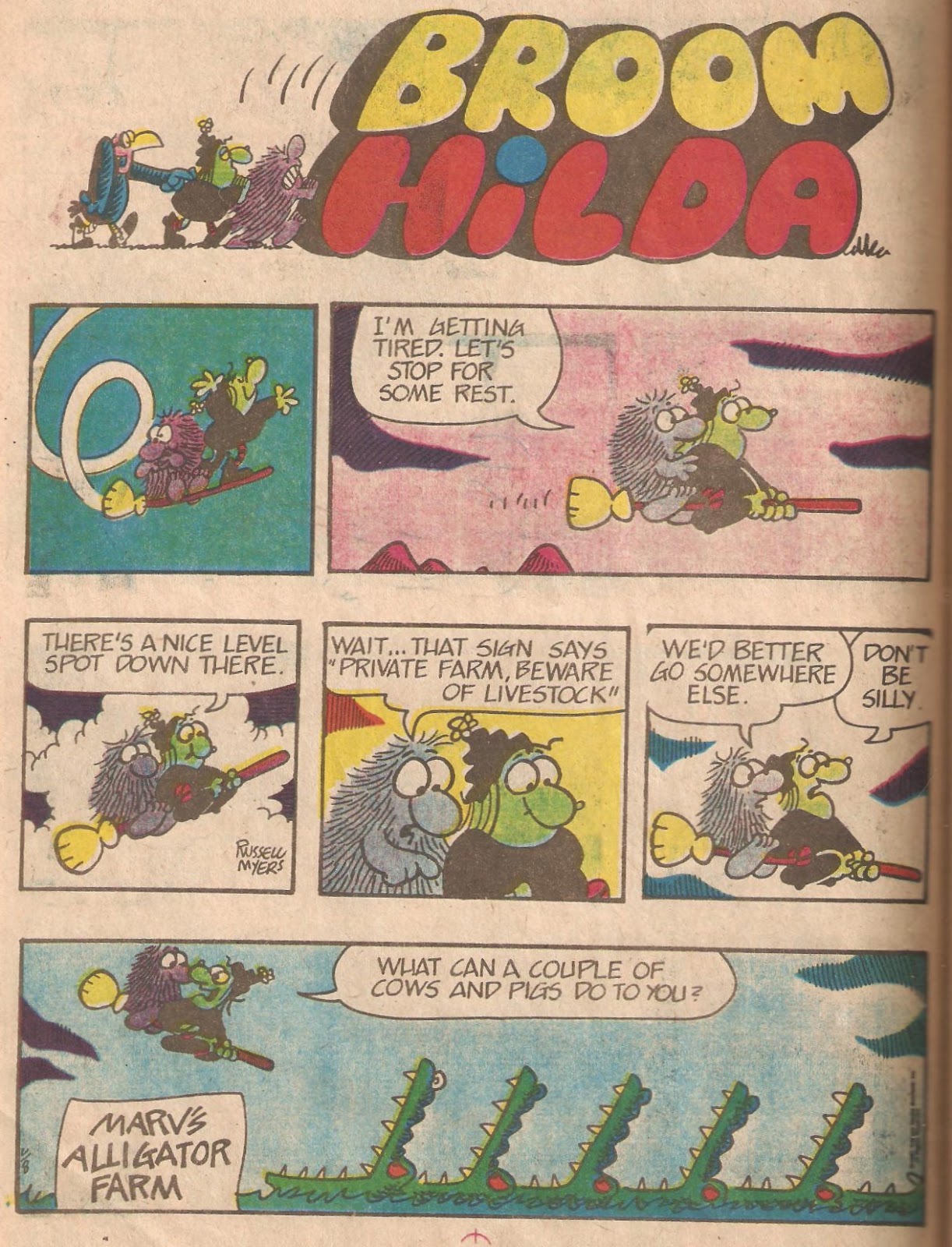 Even when she doesn't wind up crashing upon impact (we've never actually seen her land, so like recent sightings of Bigfoot, we'll have to take their existence of safe landings as pure hearsay) they still wind up in unfavorable outcomes. 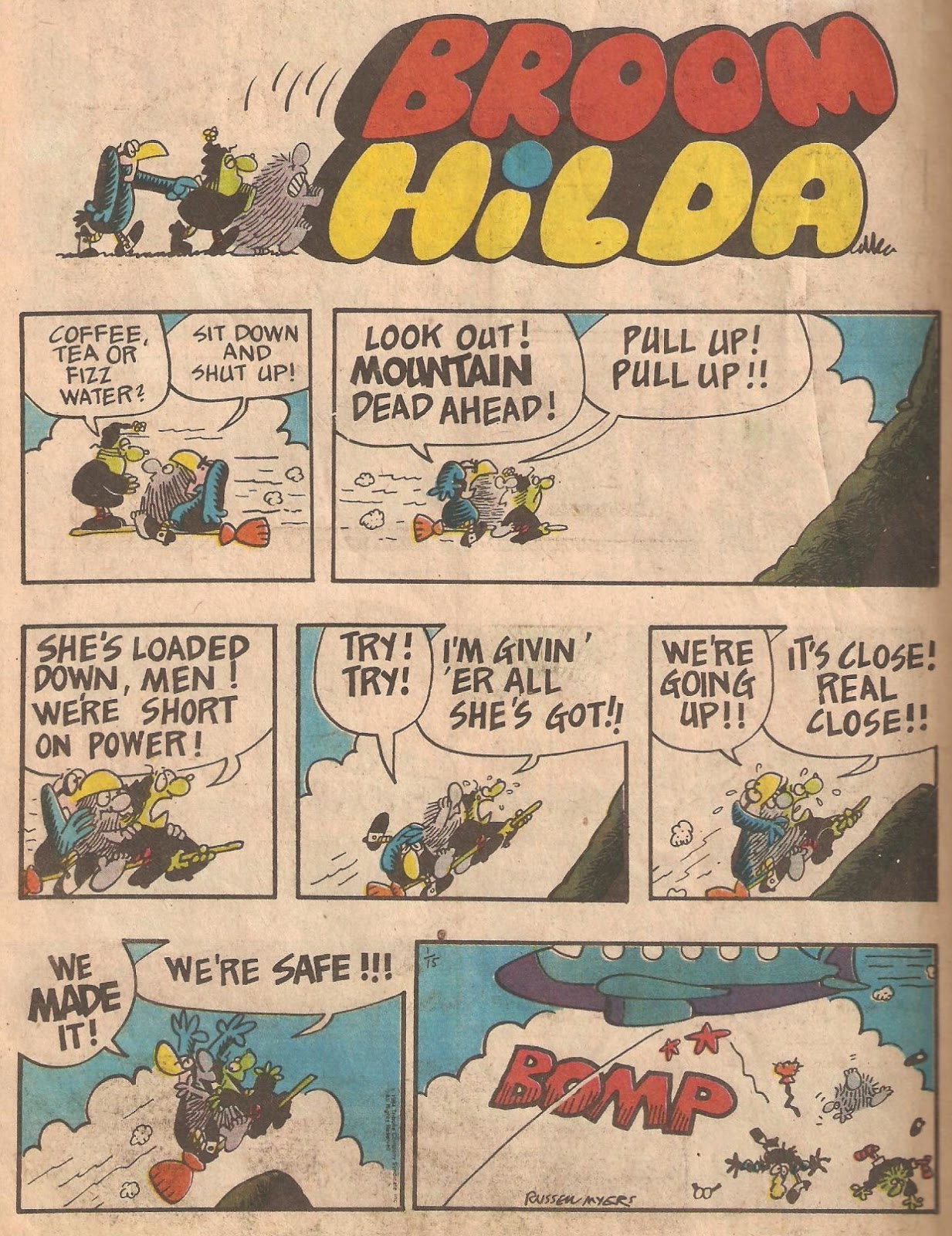 The curious thing is that despite Gaylord being a bird, and Broomie a witch, there are instances where either are shown to be riding airplanes.  But this could be another instance of writer-selective amnesia, since episodic strips like these don't demand total consistency, which I'll point out later.

When she's not using her face as an airbag, smashing her broomstick to toothpicks, she's falling off her transportation household cleaner. 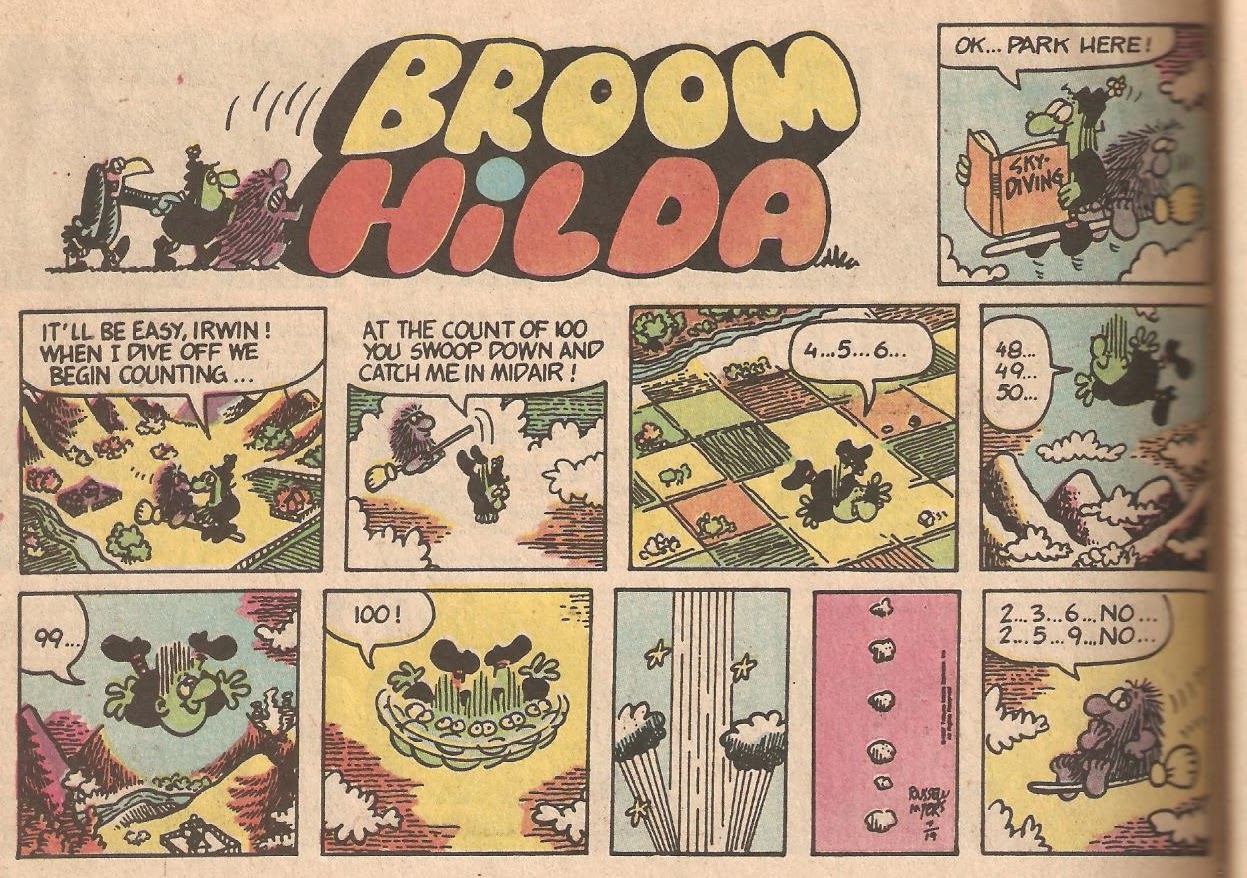 The above is an aberration, since she doesn't often engage in daredevil tactics without a reliable safety net that knows how to count.  Most often, it comes from not having a firm grip on her handle, or being too careless, which could be chalked up to either drunkenness or old age.  Take your pick. 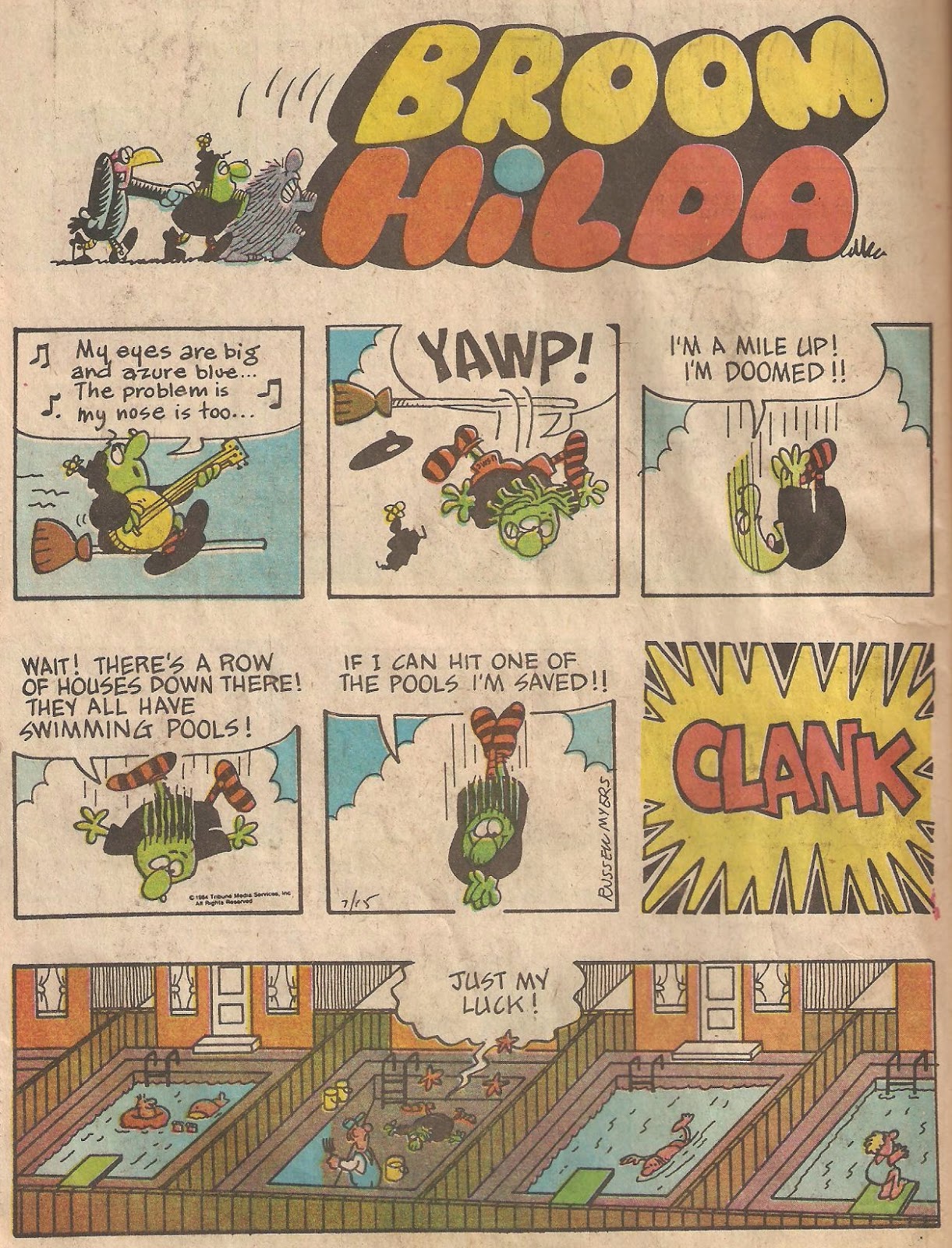 As can be seen here, Broom Hilda has no resistance for aiming at a pool full of water, which makes the next installment more perplexing: 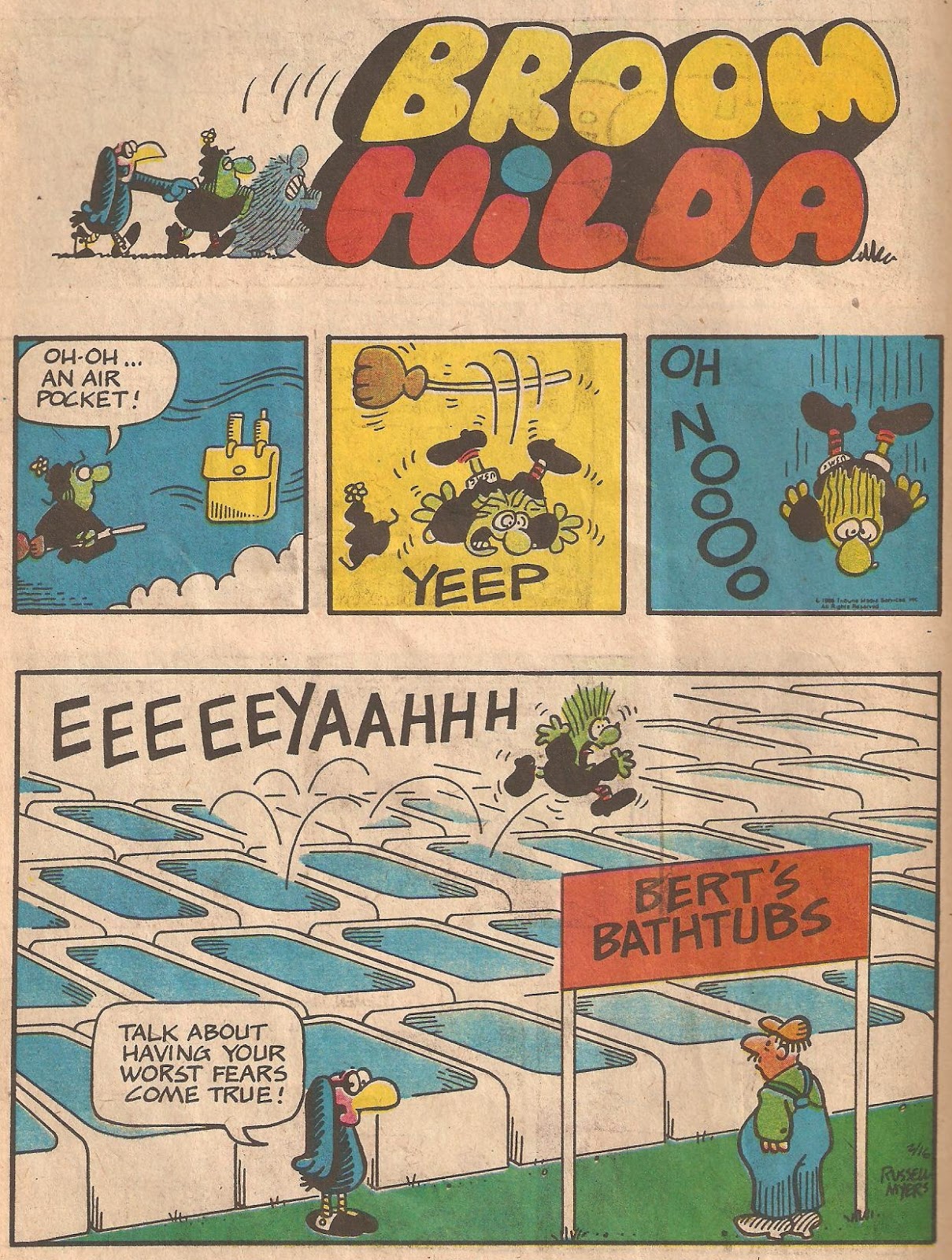 When I first read this, I had no idea why Broom Hilda was so terrified because there were instances where she took baths without much fuss, so this is something of a CIDU for me.  However, this may be down to personal preference, since Broom Hilda has certain standards of her own: 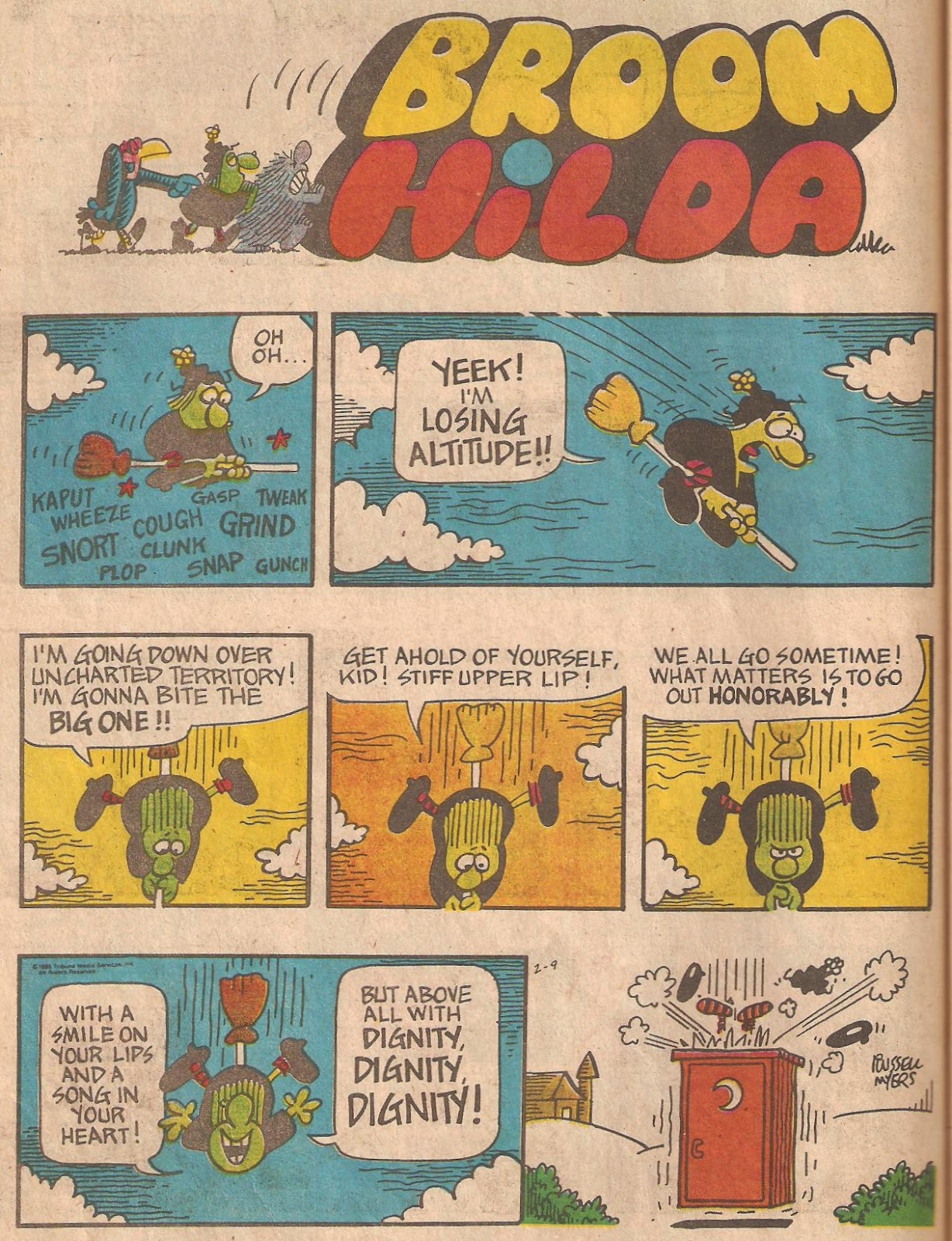 Of all the soft places to land, this one is probably the worst.  Though in other instances, she's been comparatively lucky:  Comparatively being the key word. 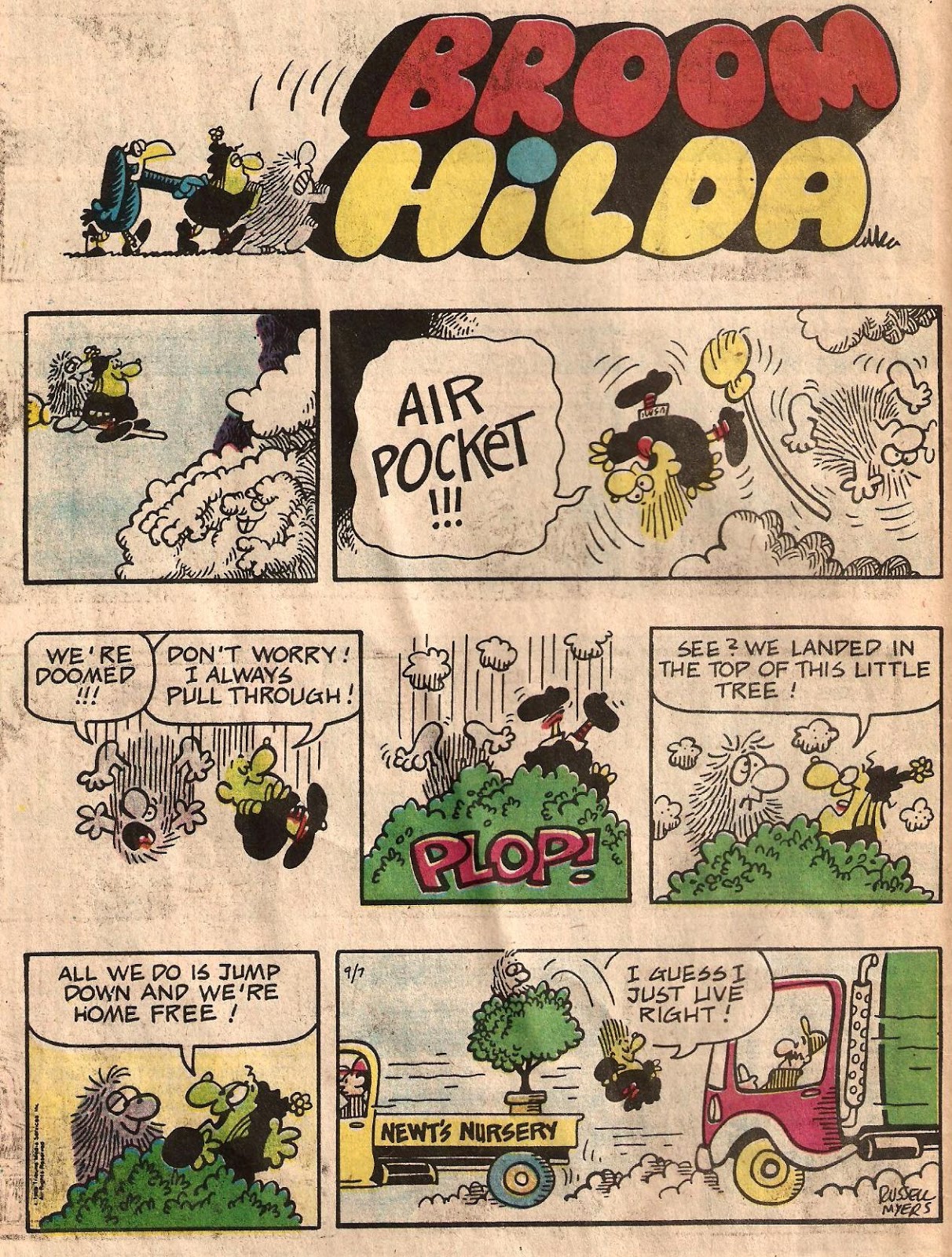 On the rare occasions where she manages to succeed at a soft landing, these incidents rarely turn out to be fortunes of fate, resulting in delayed reaction disasters in the making. 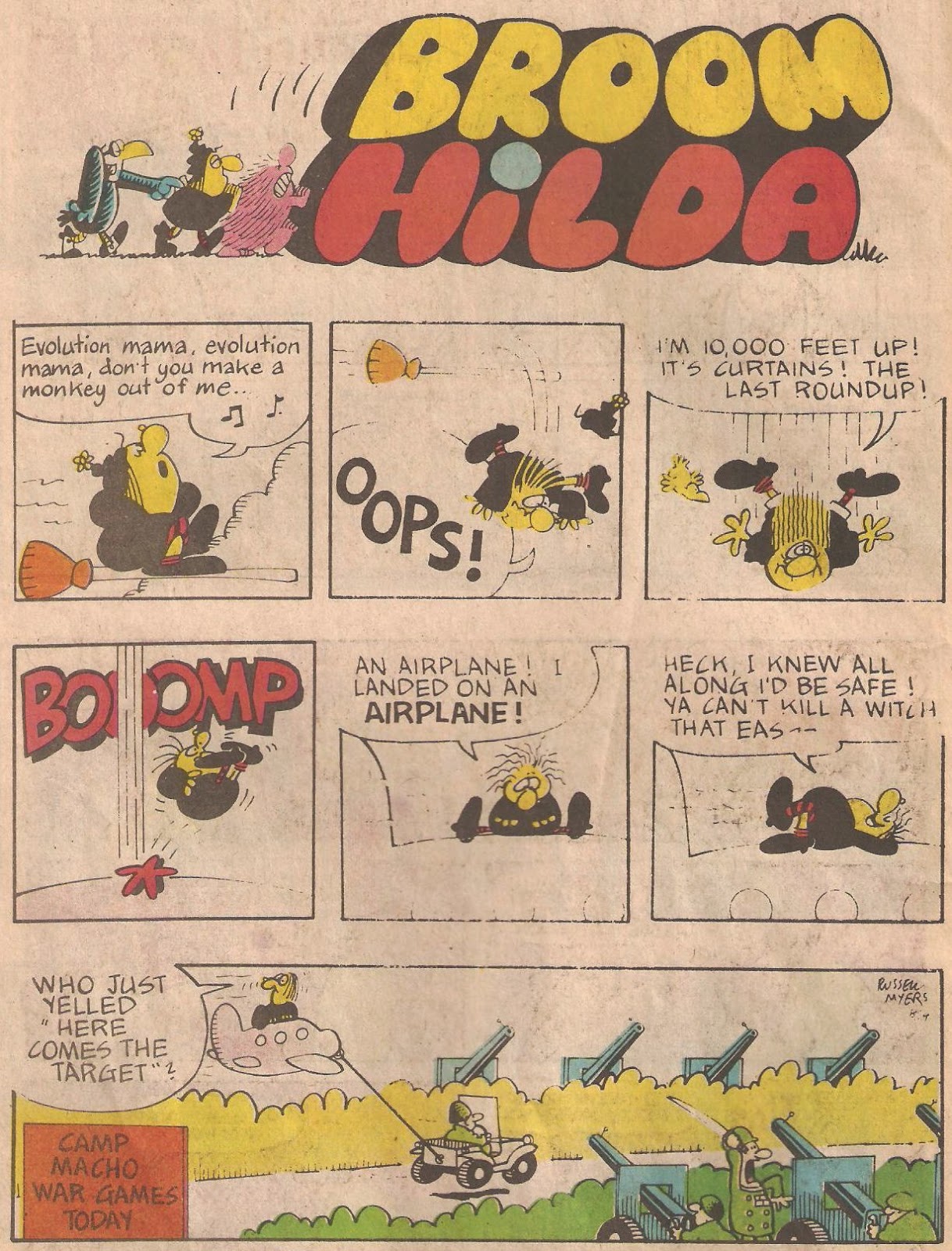 In real life, falling from such a height would rarely turn out to a happy ending.  So on this parting note, here's a favorable outcome for such a dangerous method of going as the Old Crow flies. 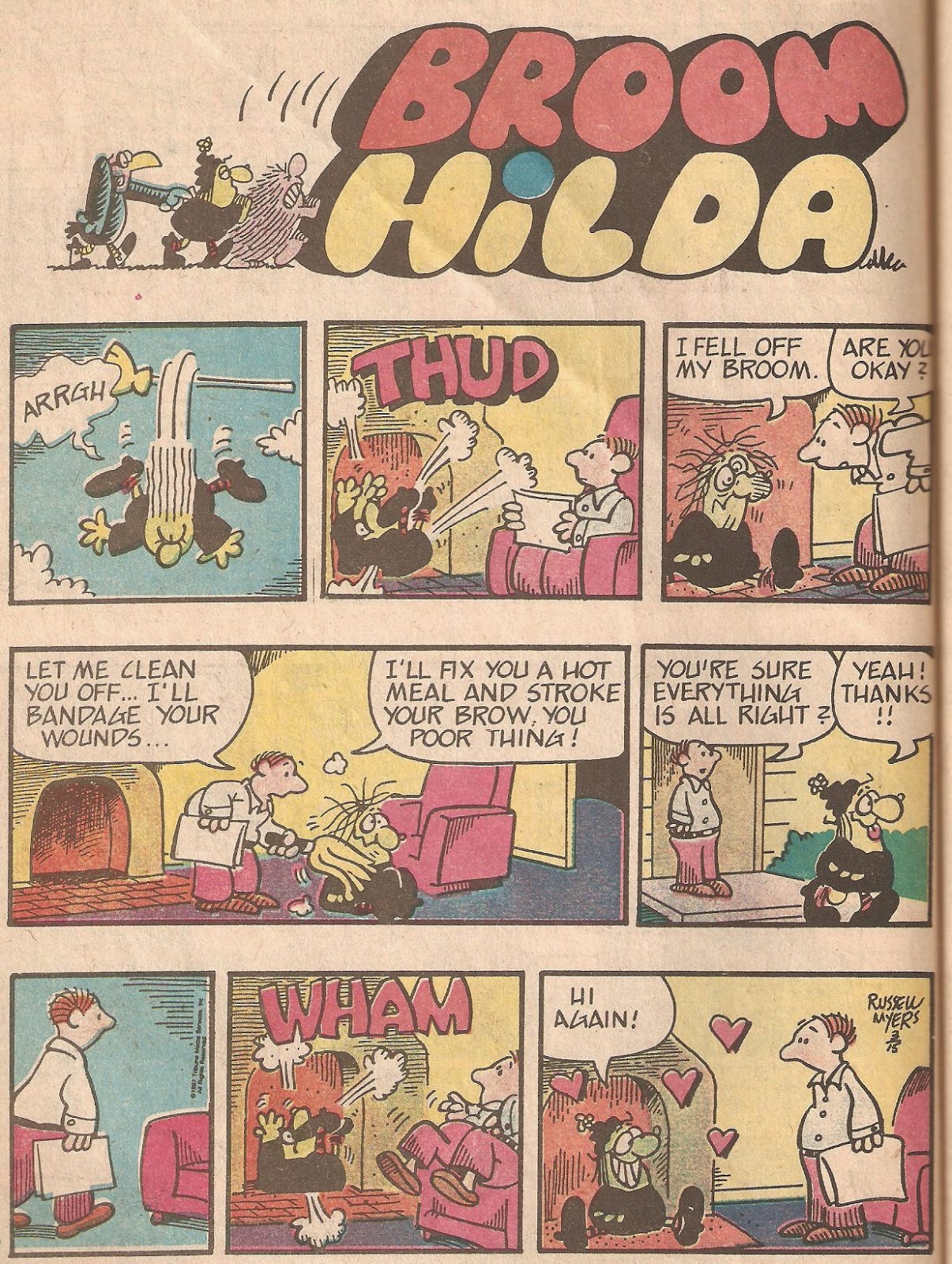 Well, happy for one side.  No good deed goes unpunished.