Charley’s War is the best War comic you’re not reading right now. Not to be confused with Charlie’s War (different spelling), Charlie Wilson's War (different war) or Foyle’s War (different medium). This Charley is Charley Bourne who’s an idealistic (if dim) kid who wants to enlist in the army to help support the war effort. The army, wanting new volunteers accept Bourne’s admission, even though he lists his age as 16, but writes his date of birth as 1900. (The war started in 1914)

From the moment he steps out of training, he’s thrust into a hellish experience that’s nothing like he ever expected.

The early issues started out with dual narratives, with Charley experiencing the war, and toning it down in his letters to his parents in cursive. Eventually, the things happening began to outpace his ability to write home, which was a good thing, since the letters slowed down the rapid-fire pace. 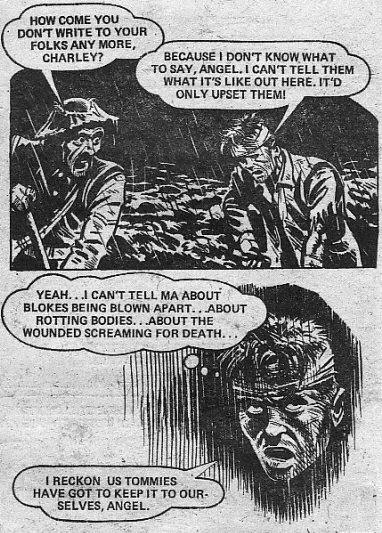 There were several things that postponed my knowledge about this comic. 1. It ran in a British magazine. 2. It was published in a war comic magazine. 3. The artwork was mainly in black and white. 4. When serialized, it only posted a few pages from last week’s release. Comic creators may talk about how difficult it is to do 16 pages for a Manga chapter on a weekly basis, but I’ll posit that it’s far harder to do a continuing storyline 3-4 pages at a time.

One thing that I liked was that they sung old war songs that were immortalized by Peanuts characters. Thanks to this, I was finally able to find out what the missing lyrics were. 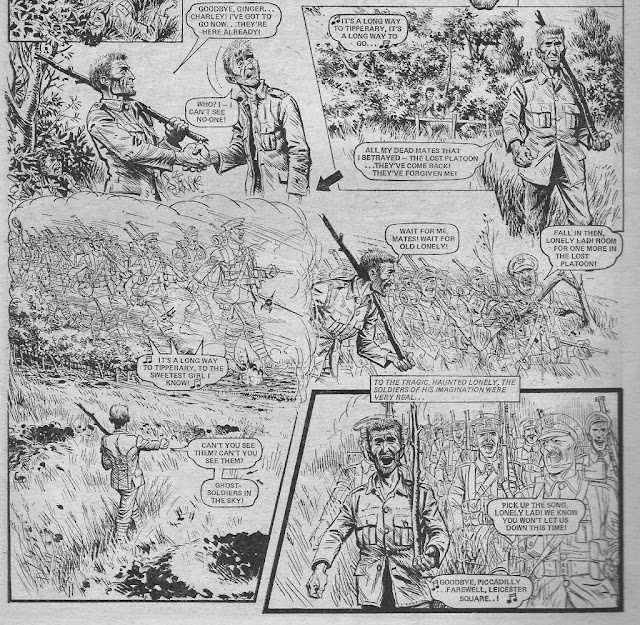 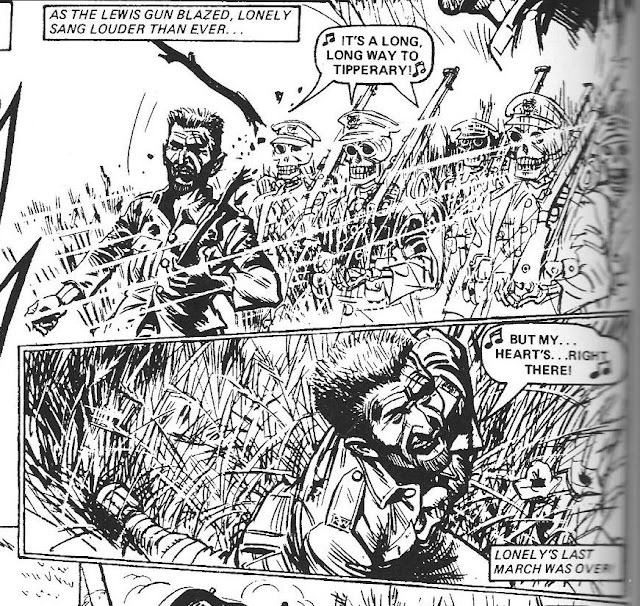 In grade school, I was very annoyed with having to memorize the lyrics to Flander’s Fields. Even now, the first five stanzas are still stuck in my head. It wasn’t until I read this War comic that I began to understand what the lyrics meant. This is required reading for anyone who doesn’t know the significance of the poppies that’re sold around this time every year. There’s plenty of comics detailing the horrors of World War II, but there’s almost nothing known about The Great War (also known as The War to end All Wars) 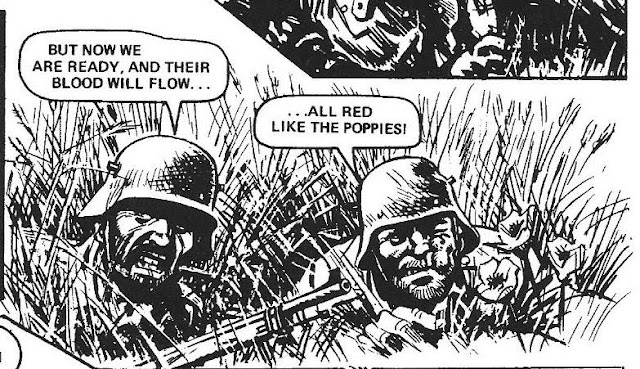 The ironic thing is that it was published in Battle Magazine, which was well known for its patriotic war stories. Charley’s War was different in that it wasn’t done in the style of boy’s stories, which was the norm, but was done in an anti-war vent. In that sense, it was completely different from the other comics in the magazine. (I’ve never actually seen a pro-war comic or movie, so I have no idea what they’re like)

The amount of research and detail that Pat Mills and John Colquhoun were able to accomplish on a deadline schedule is astounding. Not to mention the amount of trivia that would be considered unbelievable:

Germans using their men as wheelbarrows to shoot machine guns. 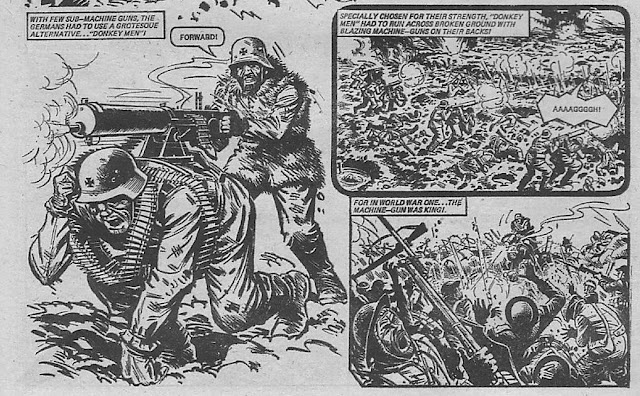 Using champagne to cool down a machine gun. 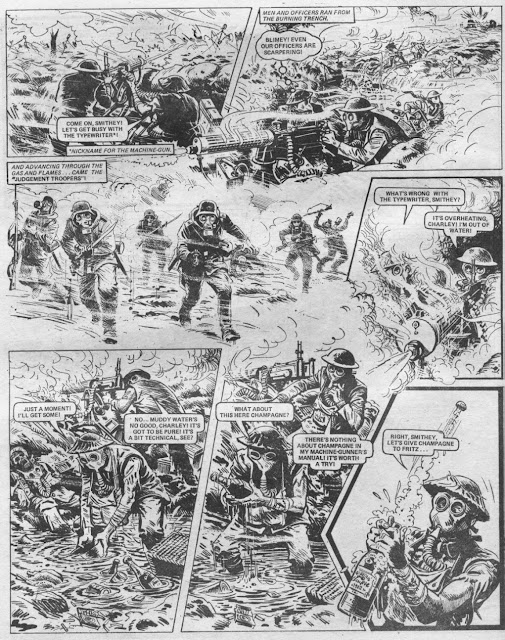 Shooting through your own plane to hit an enemy flying in your blind spot. 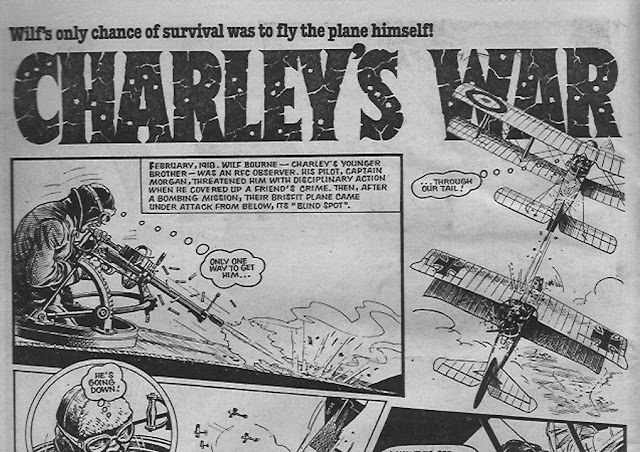 British Officers treating war like some kind of game. 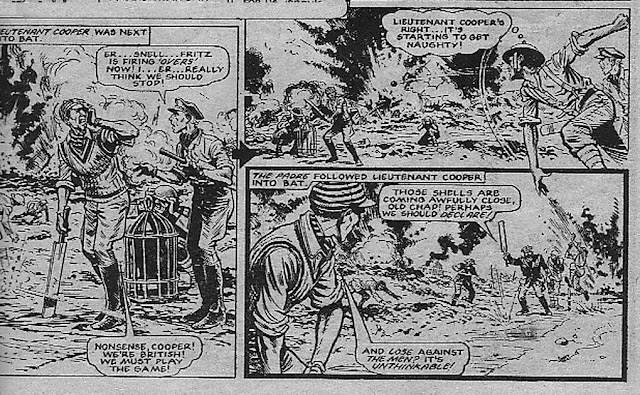 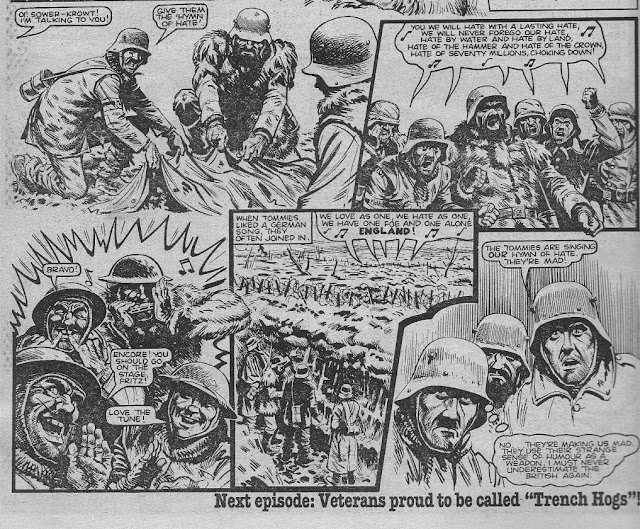 All these and more were events that actually happened during wartime. When Charley’s War was serialized, there were letters of complaint that such things were inconceivable. In fact, the only unbelievable element is that for all the brutality that goes on during the war, there’s practically no swearing. It never gets much raunchier than a “blimey!” around there, despite the brutality of the battlefield. Considering that this was serialized for young boys, this kind of censorship was understandable. 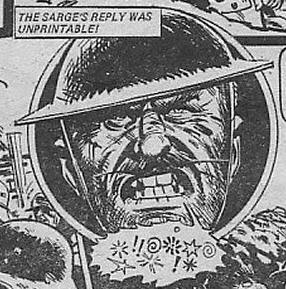 As Pat mentioned in his notes, WWI was the major inspiration for SteamPunk stories. Many of the early inventions such as tanks, gas masks and flamethrowers were due to creative innovations during wartime. Fans of the 15th volume of Full Metal Alchemist would surely identify with this comic. 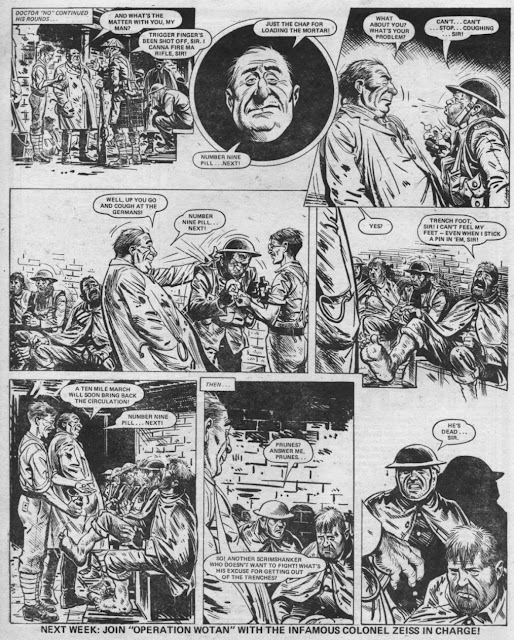 Charlie’s War was also notable for having plenty of side characters that were rotated out once they’d gotten killed or wounded in action. Some of the more memorable characters who managed to survive long enough include:

Weeper, a grinning fellow who was constantly crying from the aftereffects of a gas attack.
Smith 70, one of the numbered Smiths who was a technician who had the phrasing tic of, “it’s a bit technical, know what I mean?”
Officer Snell, a snobbish man who was more concerned with appearances and authority than actually winning the war.
Blue, a veteran war deserter who looked and acted like Jack Nicholson. 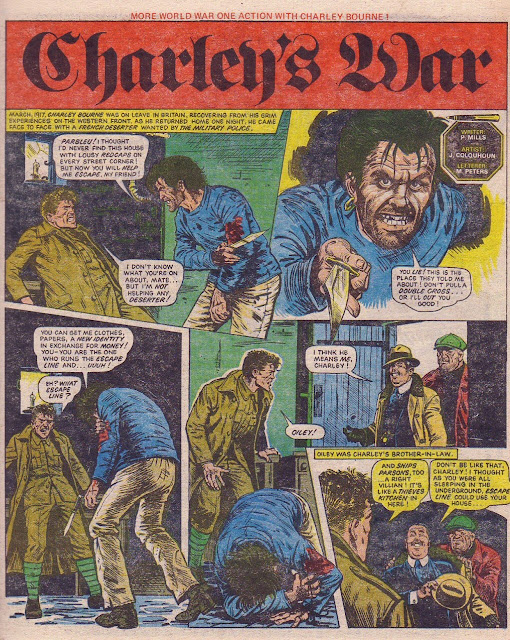 Of all the interesting characters that’re peppered throughout the various war stories, general notice should be paid for the most intriguing side character, Sergeant Bill Tozer. He displayed a certain sadistic glee over torturing his men... 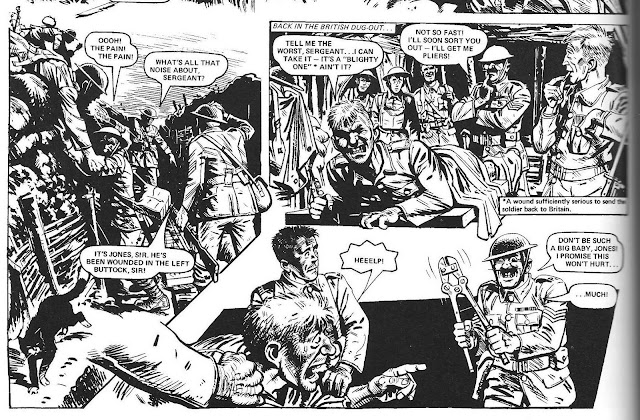 ...while also knowing when to look the other way. He’s the kind of man who you wouldn’t want as a friend, but when the chips were down, he’d look out for you better than anybody higher up the ladder of authority.

Another thing that makes this so memorable is how Charley’s family was involved. They weren’t just chuffed off to the side - they had their own roles. His father was a policeman, his mother worked in a munition factory, his wheeling-dealing cousin Oiley dealt with the black market, and his brother Wilf wanted to join the war despite Charley’s warnings not to make the same mistake he did. There was also cousin Jack’s naval battle in what Pat said was his least successful storyline. It might not have been a big hit back home, but I was riveted to my seat while reading the duel between two ships doing everything they could to sink the other. 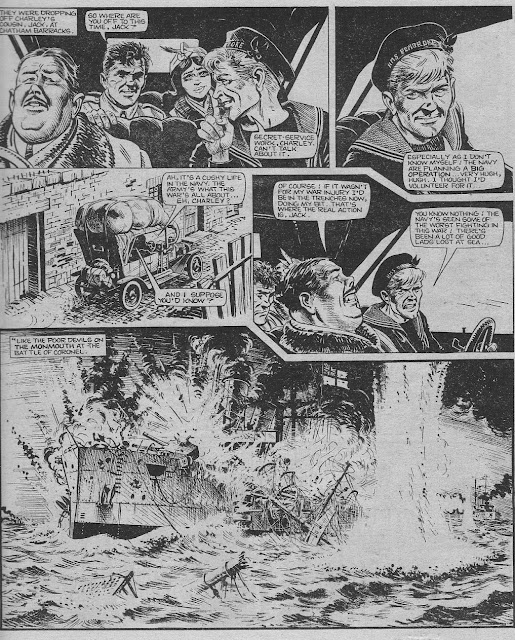 Sadly, lack of funding for Pat Mill’s research led him to abort his planned storylines and was continued past The Great War to WWII where Charley’s son wanted to enlist himself. The writing was done by Scott Goodall in a tone similar to boy’s adventure stories. Despite still being drawn by Colquhoun, it was cancelled after just a year. It’s still unknown whether the WWII stories will be reprinted, since Pat Mills said his ending point would be this panel after the first war was over. 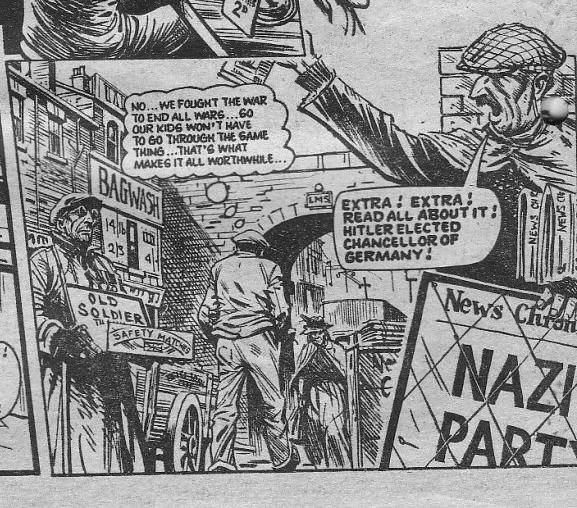 Charley’s War is currently being reprinted by Titan Books. Only six volumes have been released so far. When I found out that they were going to be released at the pace of one book a year, I couldn’t wait and downloaded a torrent of the entire series. If you’re planning to do so, I should warn you that scans for the Battle of the Somme are rather small and inferior compared to the higher quality version of the reprints. While reading those, you might wonder what the fuss is all about. If you want to enjoy the full experience, request an interlibrary loan or purchase the books yourself. You won’t regret it. 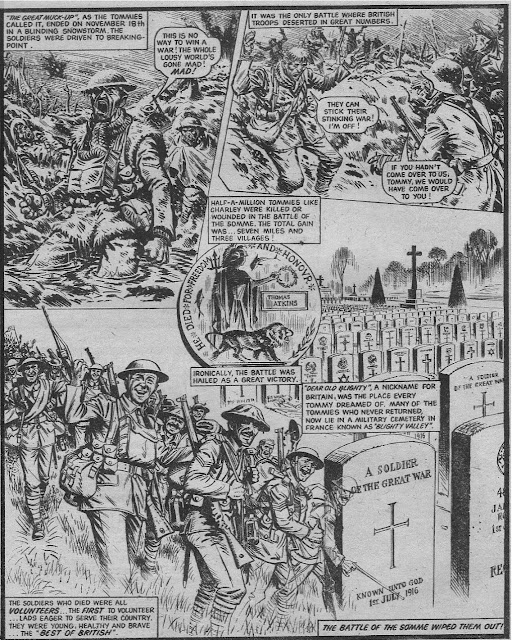 If there is one fault I have with the Titan Books reprint (other than the slow release dates) it would be that the volume endings for the first three books end in awful cliffhangers that don’t stop until the 4th volume. For those only interested in the Battle of the Somme (the first and longest story), go with the first three books.
Posted by DeBT at 2:38 AM