It was just recently announced that the long-running comic Cathy would be finally stopping after 34 years in the business. That’s a long time for any comic to be in the funny pages, and as per their reputation, they have a tendency to become stale. 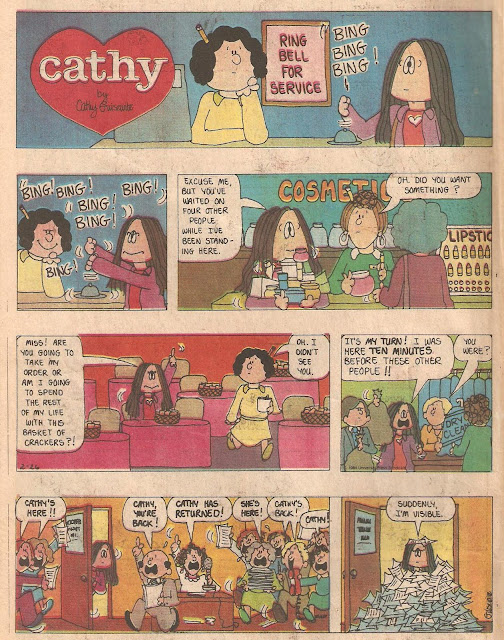 Very few strips can manage to remain relevant past their sell-by date, and Cathy certainly fell into the stereotypical trap of Women, with her constant portrayals of shopping, pigging out, dieting, bad dates, overbearing Mothers, and workplace problems.

Still, I’m relieved to see the creator finally decide to put their legacy strip out to pasture, even if it’s 20 years too late. The fact that a successor hasn’t been named to take up the comic is a relief after having to deal with the driftwood of other legacy strips that’ve threatened to take over the rest of the comics page. I have no desire to read any B.C. strips after Johnny Hart passed away, especially since his relatives’ attempts to imitate his genius are terrible. Since it’s incredibly difficult to get rid of any long-running favorite strips, Guisewite’s move is a welcome change of pace. 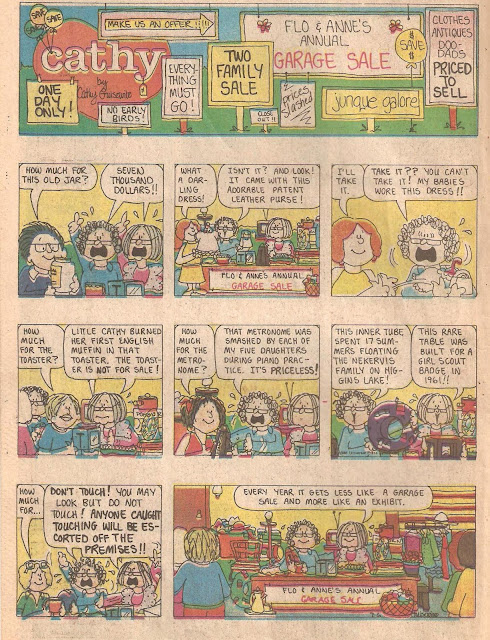 (For the sake of simplicity, I’ll be referring to the cartoonist by her last name. Naming the strip after herself was something she always regretted)

In fact, it’d be extremely difficult to find a suitable replacement, since almost all of the themes in the strips were autobiographical to a certain degree. As simplistic as her drawings were, the early Cathy versions were Even Rougher. 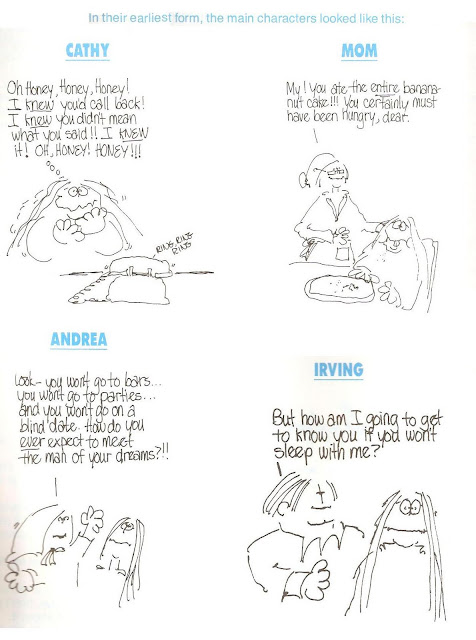 If these early strips hadn’t become obscure, Guisewite could’ve been accused of hiring a ghost artist in the same way that Gary Trudeau of Doonesbury was when his artwork improved after his sabbatical.

When I was still reading comics for the pictures, I always enjoyed converting Cathy’s facial expressions to sound. The triangle smile would be an “eeYoooh”, the grin, an “gih” and the yelling, “Aaah”. The sound of a closed mouth would be different depending on the shape of the mouth, while the puckered lip (in the shape of a heart) would be an almost inaudible “tuh”. Thus, a typical strip would sound like: 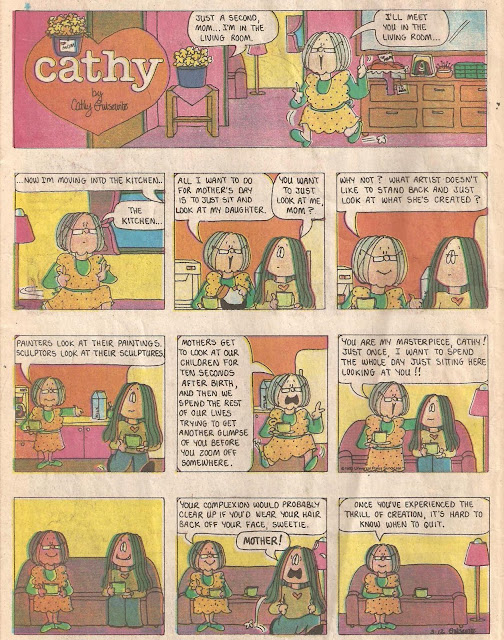 eeYoooh, tooh, eeYoooh tuh twmm Aaah eeYoooh, gih Aaah tht. (This is a rough estimation - I have a hard time converting my internal sounds, since there’s no audible equivalence)

Cathy was a very informative look into the mind of a woman, which was an eye-opener. It certainly opened me up to several ideas that would’ve never considered otherwise. 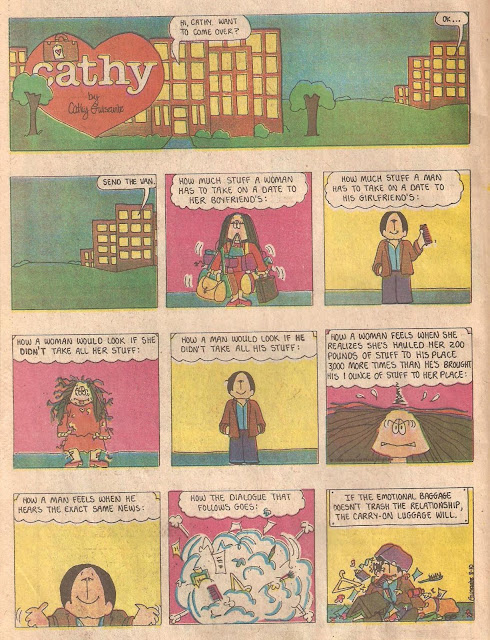 Just as PlatyPusComix liked Bloom County for its rambling speeches, so too did I enjoy Cathy for its extended verbal monologues. Below is one of my favorite strips which never fails to make me laugh. (Pay attention to the menu the waiter is carrying) 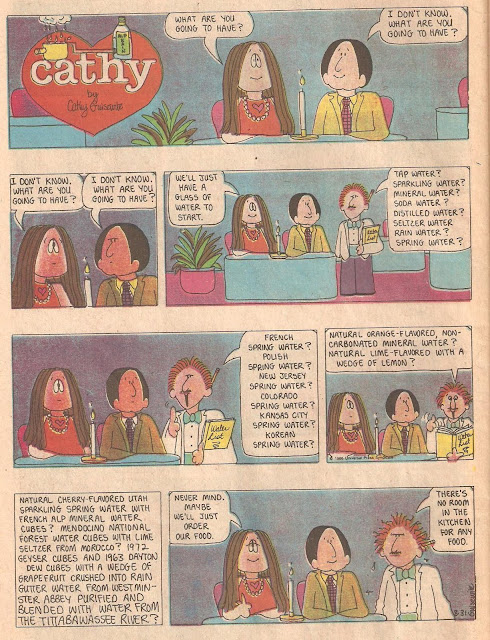 When Guisewite was asked about the strip’s ending, the answer sounded very much like a typical Cathy strip:

Can you offer any insight as to how the strip might end?

CG: The strip will end with me weeping at my drawing board, mascara and anti-aging serum dripping all over the blank page… one hand clutching a pen, one clutching a spoon… on the speakerphone with my incredible parents, snapping at them for calling with their loving support right when I’m so busy being hysterical… frantically rethinking my whole decision… …Oh. You mean how will it end in the paper? If I had the sort of brain capable of planning two weeks ahead I never would have been able to create this strip for the last 34 years.

There were very few strips involving Cathy’s Dad, when her Mom played a much bigger role in her life. Whenever I think of her Father, I think of these strips: 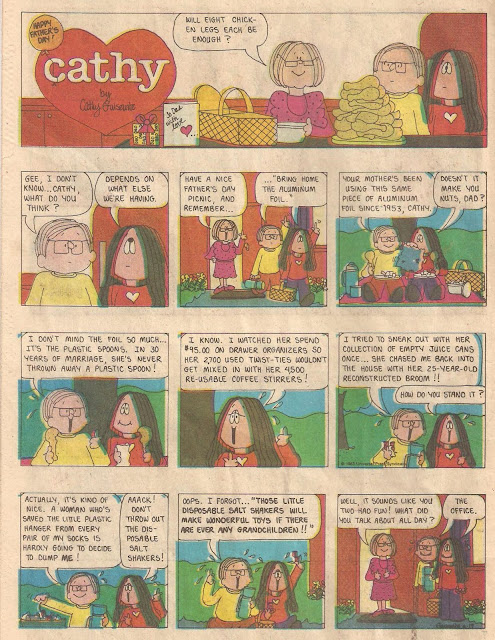 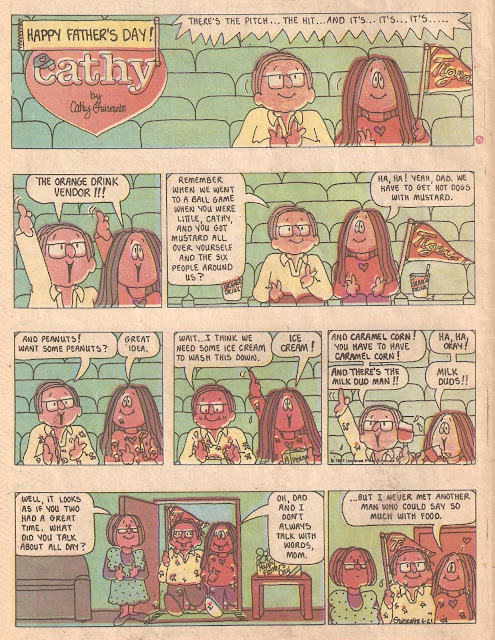 Although Cathy was always drawn without a nose, there were rare examples when she would be seen in profile that her nose would suddenly appear. 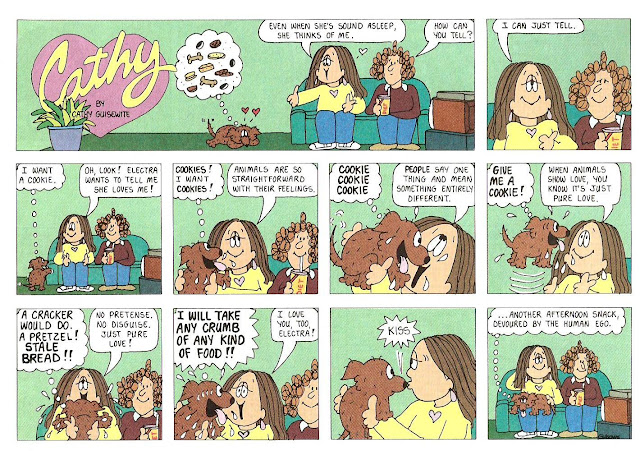 The cast was relatively small and stayed that way, though the changes that occurred were glacial, they happened. Andrea, Cathy’s feminist best friend got married to Luke, who she met online and later had two children, Gus & Zenith. Charlene the secretary also got married to Simon, one of Cathy’s ex-boyfriends. (And no, he wasn’t evil)

For the longest time, it looked like Cathy would remain a spinster until she finally married Irving in a year-long storyline that was collected into a single book with some extras of their history. I felt that when Cathy (finally!) married Irving, that was the best time to stop reading the strip. Guisewite said the reason she did so was because she could no longer identify with the single working woman, since she was married, and had less material to work from. A wise move - if your well’s running dry, it’s better to move to fertile ground. It’s certainly more relatable than the abysmal Elizabeth / Anthony (ugh) wedding in FBOFW.

Of all the secondary characters, my personal favorite was always the Saleswoman. The saleslady was a great character, since she could be helpful, annoying, exasperating and just as brash as the main character. She’s the definitive Lucy archetype if Lucy ever branched out from abusing Charlie Brown to mocking the entire sales world. Why go after one wishy-washy kid when your potential victims can simply walk up to you? 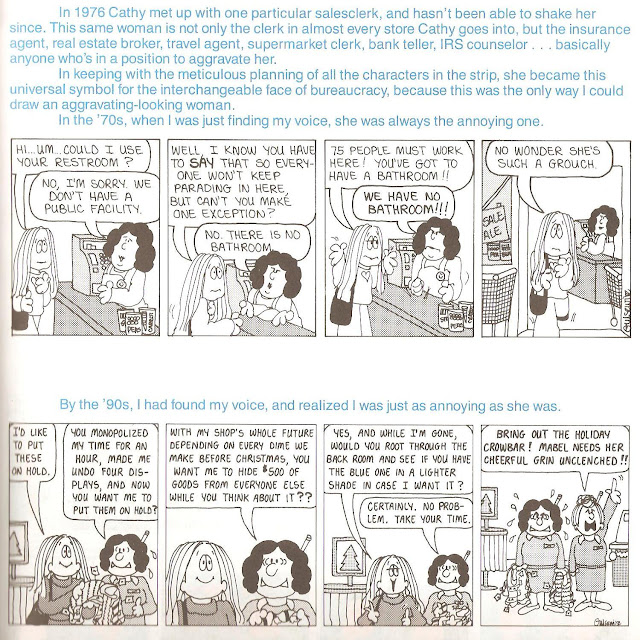 There was a time after dating multiple horrible men that Cathy seemed to find a man who was the perfect match for her - Alex. He was warm, caring and compassionate. In fact, he was TOO perfect. Cathy enjoyed going out with him for awhile, but then for reasons I can’t remember, the romance faded. At the time, I thought for sure that Cathy would end up with him in the end. It wasn’t until I saw the forced relationship with Elizabeth and Anthony that I preferred her other suitors, such as Warren who was a perfect pastiche of Irving. He might’ve been a cheating jerk, but there was more emotionally charged and memorable episodes involved with him than there ever were with Anthony. I began to root for this guy even though he was disgusting, simply because he elected such strong feelings in me. This might be why women tend to prefer Bad Boys as opposed to “Nice Guys”. 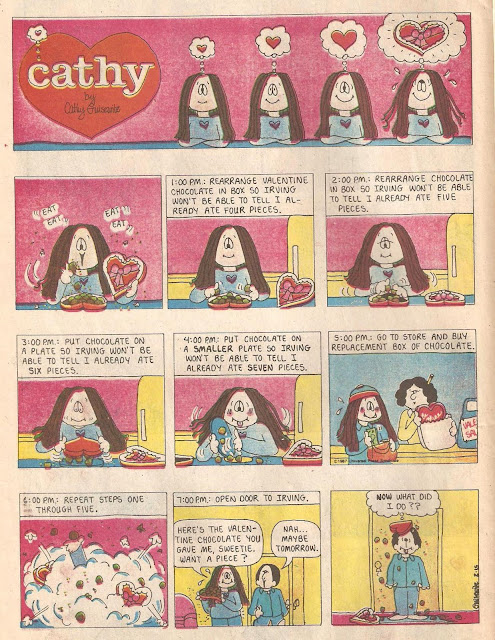 The interesting thing about Irving is that, even though he could’ve been the definitive Straw Man, there were several strips where he made good points from his point of view. He was more clueless than deliberately harmful, though his Male Chauvinism tended to shine through. As exasperating as Irving could be against Cathy, they played off their strengths and weaknesses so well it was impossible for anybody else to come between them. 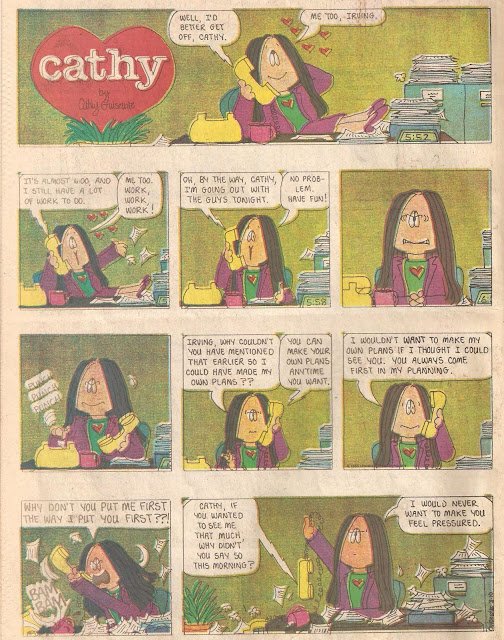 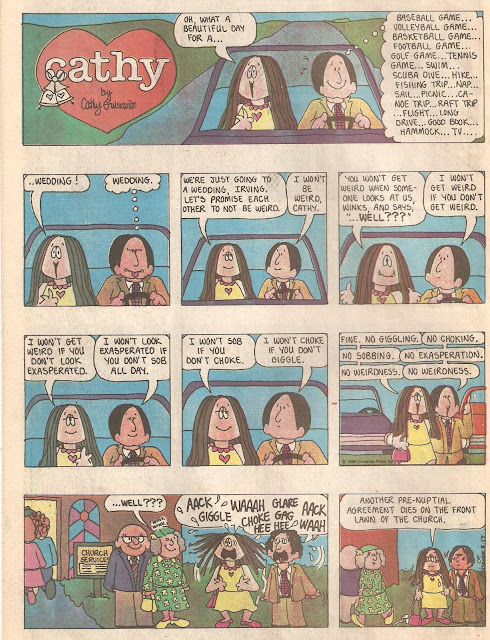 Because the artstyle remained virtually unchanged throughout its run, it’s extremely difficult to refer to any point later in the strip’s life when it didn’t focus mainly on the stereotypes of Women. The only way to tell the age of the strip was with Irving’s hairstyle, which changed multiple times throughout its life, before settling back into basic black. Cathy was never better than when it explored other realms of woman’s issues, such as the time Cathy’s boss Mr. Pinkley almost seduced Cathy in her apartment and later tried to cover it up. 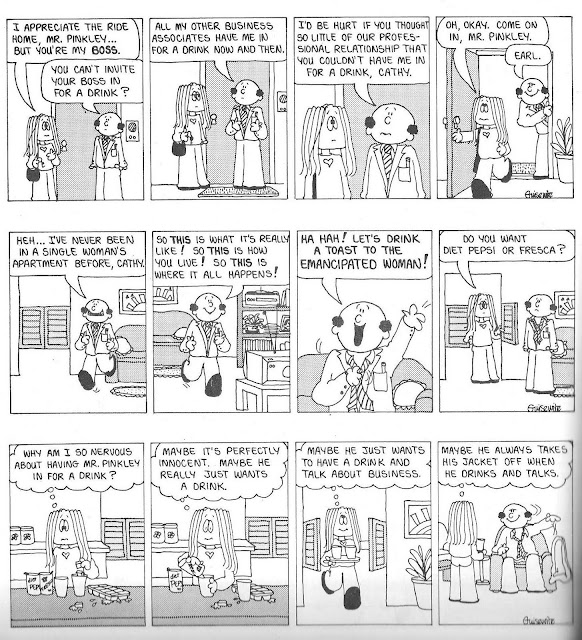 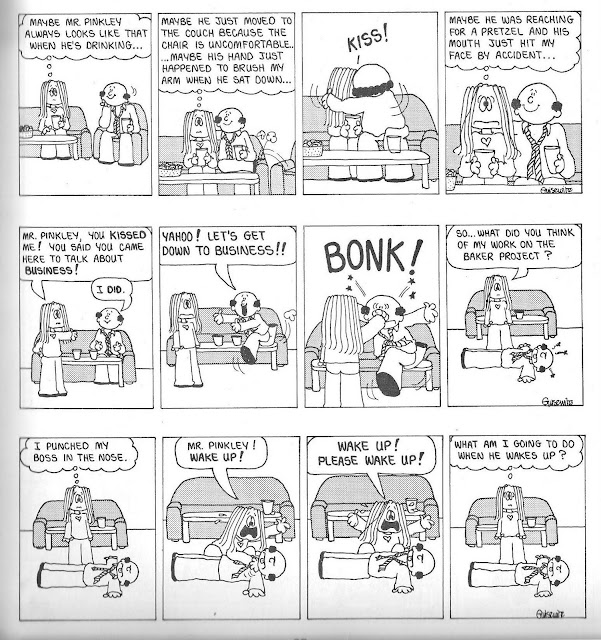 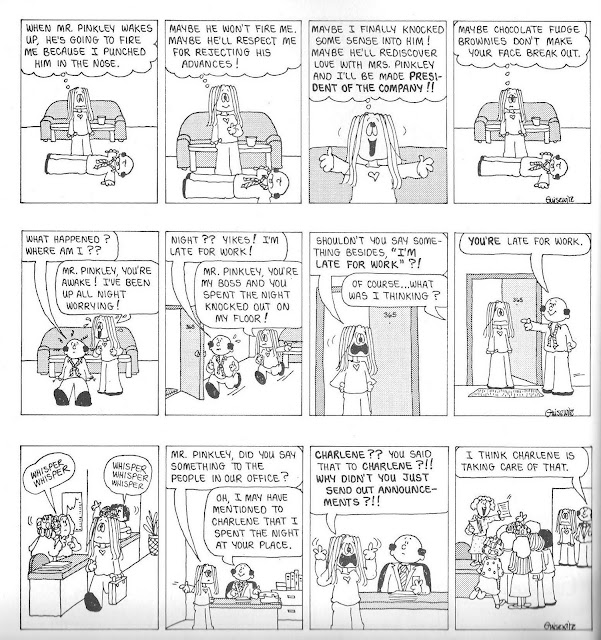 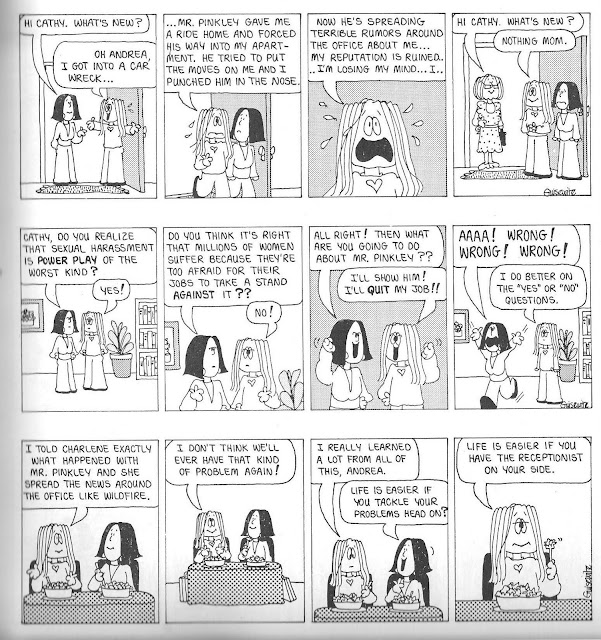 The most controversial issue was when Andrea, who’d always been a firm advocate for woman’s rights ran into trouble when her maternity leave didn’t mean she’d get her job back after Zenith was born.

I’m sadly ignorant of anything significant that might’ve happened to Cathy in the interval between when my paper stopped carrying her strip and before she got married. The only storyline I remember in passing was when Irving was hired to replace her job position. What made it worse was that it’d been a long time since she’d last seen her boyfriend, and was utterly appalled that he was qualified. The fireworks that confrontation generated must’ve been worth seeing - especially if he was given a higher pay rate than her.

I’m sure there’ll be plenty of fans worldwide who’ll miss the strip once it expires on Oct. 3. However, they should remember that there’s still over 30 books of memories to gleam from. Not to mention that now that Guisewite’s now retired, there’s nothing to stop her from doing omnibus collections of her earlier works if the demand’s high enough. 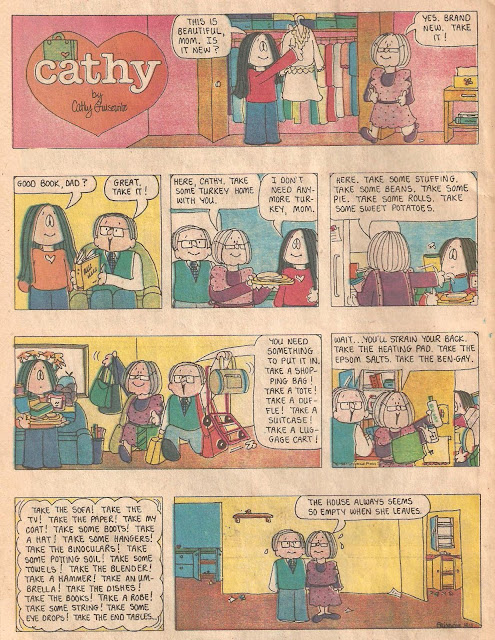