You Had me at Hello!

Long-time readers might vaguely recall a Canadian comic PSA about using the Telephone that had anthropomorphic representations of Operator, and 911.  At the time, I noted that there was also a colouring book, but figured that had long since been regulated to the Recycling Bin of history. 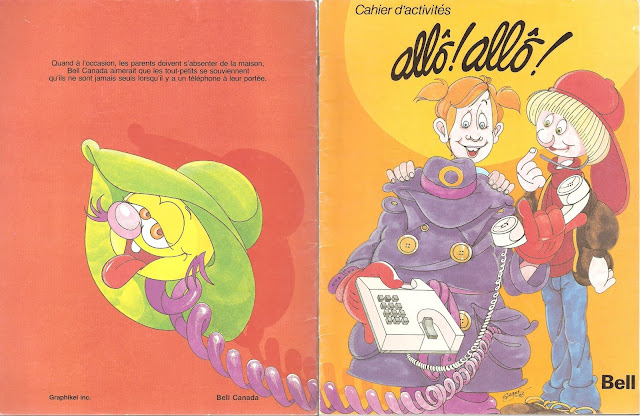 Well, as chance would have it, earlier this year, there was a Library booksale that not only dumped some of their long-kept books with little borrowing history, but also accepted submissions from people who wanted to dump material they'd read once, and never wanted to look at again, giving others the chance to share the pain, and free up room in their living spaces.
This booksale actively ran several days, and I decided to come back, even after I'd picked up several library titles worth keeping, because they rotated their stock, and there was the chance that new material might come through.  By the slimmest of chances, I came across a bunch of colouring books with this little hidden gem among them, and practically gasped upon seeing what nobody else (but me) would've appreciated.
What I most recalled was that while reading (that is, looking at the pictures), I would have the Disney Sunday Movie intro running through my head.  Not the music, but the opening camera angles.  That is, it would start out with the first page, zooming in on Special Agent 0 (Disney name), then going overhead 911's head (Epcot), then rotate past Phona and Telly (Mickey Satellite) whose names make more sense in the original French.

I only once saw an English version of this in a second-hand bookstore years ago, but only flipped through it, and didn't bother to buy it, now that I understood what little was said.  By the same token, I passed up a PSA of Smurfs brushing teeth because it too was in French, and I wanted to find the English one.
I thought back to Mike Sterling's list of Comic Shop Customer Types: The Unreasonable Mint Hound:

Customer: “I’m looking for a copy of Tales from the Uncanny Valley #2. I’ve been looking for that thing for years... I can’t believe how rare that comic is. I’ve encountered dealers who’ve never even seen an issue of this series. According to my sources, there may only be about 20 to 25 copies of that particular issue left in the world.”
Clerk: “Oh, hey, we have one. It’s in Very Fine Mint for $25.00.”
Customer: “No thanks, I’d rather get one in better condition.”
Also, since the comments were wiped when he revamped his site, here's what I saved:


So, given how rare the chances were of ever coming across another unblemished copy was, I thought THIS time I'm not passing this up.  You probably can't tell, due to the black and white scans, but some pages were done in crayon.  And some easy puzzles have already been solved, spoiling it for the rest of us.  You can probably easily bypass this by erasing the clues, but why bother?
The only thing missing from this colouring book are the Pineapple mascots.  I'm sure that until I mentioned them just now, you completely forgot they even existed.
This next bit is probably the most outdated reference, yes even older than the usage of a telephone booth.  At least those still have cultural relevance - colour-coded sections in the Yellow Pages are practically an unknown now that any contact information is available online.
And just for completist sake, here's the serial information, just in case anybody still wants to order this.  I'm unsure if there's any complaints about violating copyrights, since they had the chance to reprint this, and I just shared the book in full. 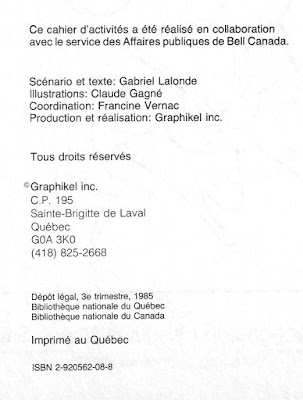