One of the most difficult things to do is to try to describe something you've experienced as a child that you have no references for today, especially if what was one widespread and common are no longer available. Even more if there are no Pop culture references or other people's memories of it occurring in the first place. And this is only further compounded by how unusual these childhood things were in the first place.  It would be like trying to describe the fan appeal of the toy line in the 80's (He-Man, Transformers, G.I. Joe) to a culture that had only the vaguest knowledge of such episodic formulaic shows that weren't Sentai series.  Trying to describe the appeal of such things becomes incredibly difficult.

To make matters doubly difficult, there were all kinds of red herrings that sidetracked my search results, ranging from TV shows to hit songs to books and even a movie, none of which were what I was looking for.  Compounding the difficulty was that I knew what the drawings looked like, but had no idea who drew it, let alone where it came from in the first place.   It was only through extreme luck that I managed to find a copy of the very comic I'd been looking for hidden away in some library archives that I was able to satisfy my itch that'd been gnawing at my curiosity for years.  In a way, there's a kind of poetic justice in making a comic about phones available via a cell phone camera. 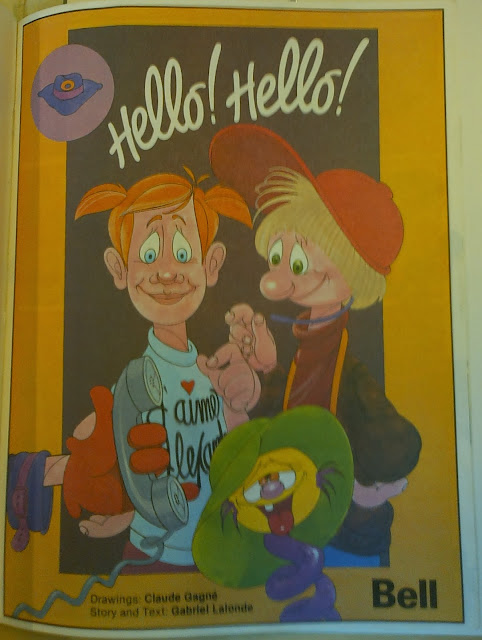 Hello! Hello! was part of a promotional package by Bell Canada originally printed in French in 1986 and then translated into English a year later.  There was another comic titled The Adventures of Binkley and Doinkel, which despite its lengthy history, I'm only familiar with the 3rd (best and last) comic of the series, which I'm still looking for.  Such PSAs were ubiquitous to the extent that there was even a colouring book of this (which I don't have anymore) and saw no need to keep it around, since I was confident in finding more about it later.  Turns out that while there are anthropomorphic representations of all things from household appliances to children's toys to world countries, more obscure references such as phone numbers are trickier to find. 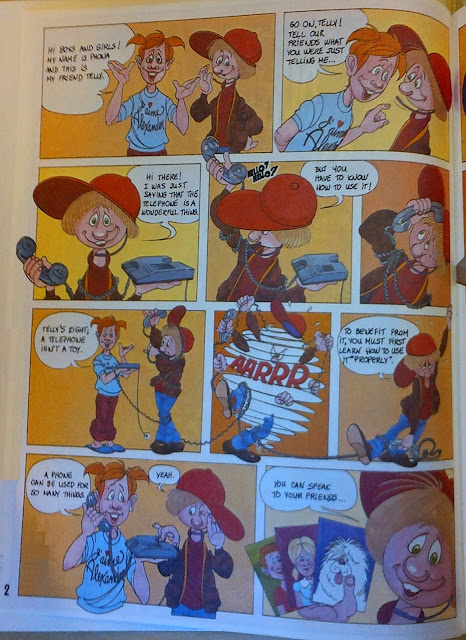 Looking at the art now, the characters have particularly rubbery faces.  Phona in particular doesn't conform to any particular typically female traits, save for some pigtails on her head.  As an introductory document to phone usage which would be considered intuitive to anyone today, there are some surprising details that seem prescient today.  For starters, Telly seems to be wearing around his head what looks like a Bluetooth headphone even though the closet comparison would be an airport microphone around that time.  Even more surprising is the notion that phones could communicate with computers, back when the notion of dial-up internet connection would be considered something of a novelty only accessible to people with enough money to afford such things.  Clearly this package was way ahead of its time. 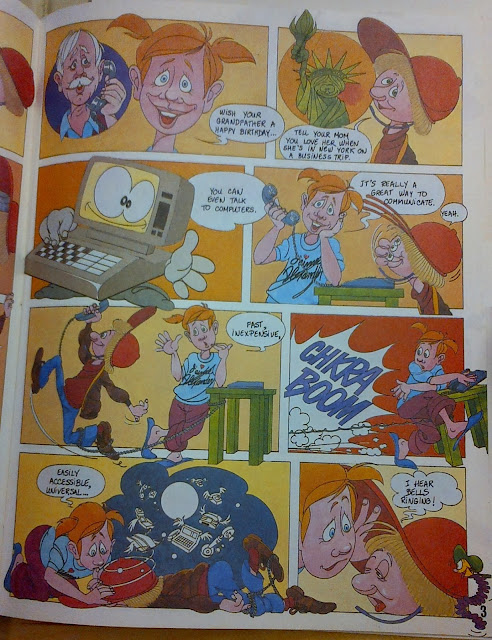 And then, in the midst of the introductory material, we're suddenly interrupted by the presence of a living slinky with a dopey expression.  For some reason, I always thought the guy in the trenchcoat's power was to create a miniature raincloud over his head.  We'll be seeing these guys again later. 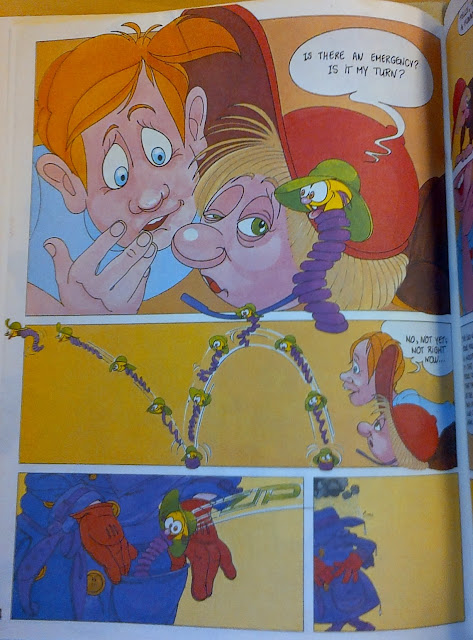 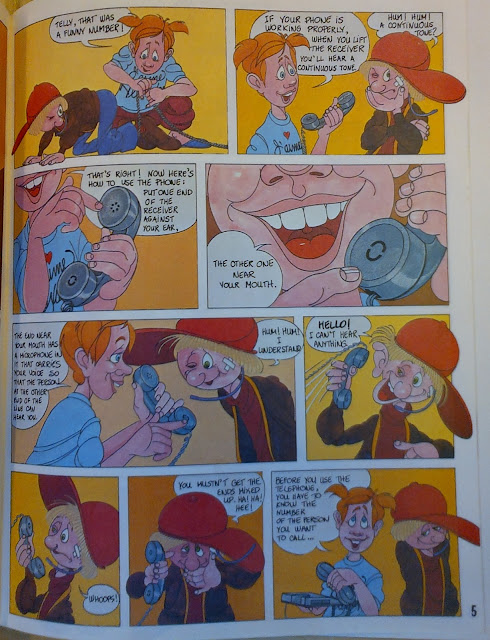 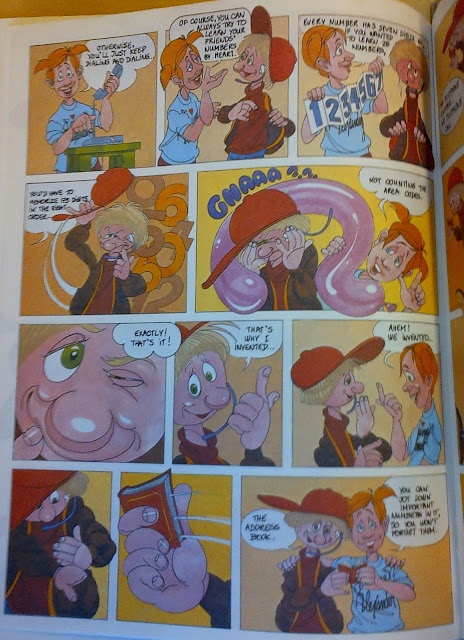 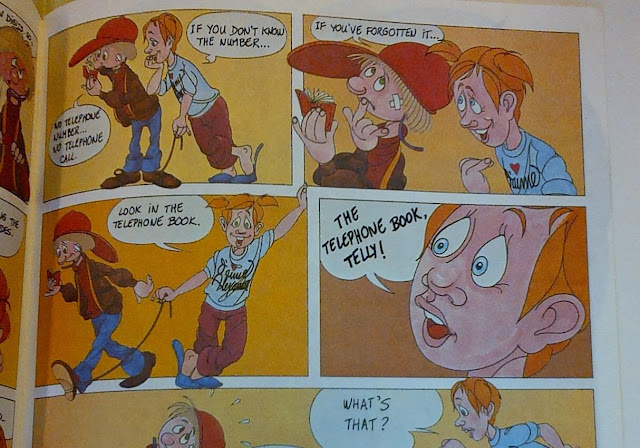 Now, I'm going to have to interrupt the middle of this page here, otherwise the next part won't make much sense.  As I mentioned before, this comic was originally printed in French, which is why Phona's "I Love Alexander" T-shirt remains untouched throughout.  Retouching art and text can only go so far.  With that in mind, what happens next is well... I'll let you see for yourself. 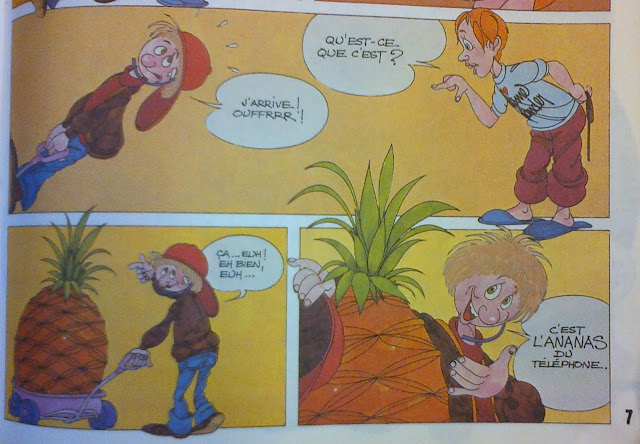 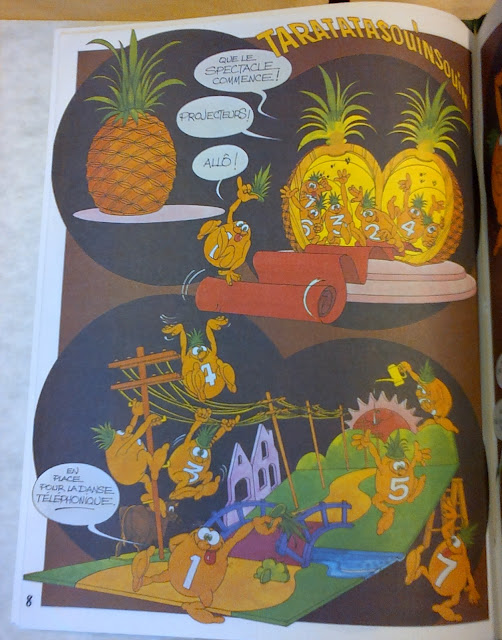 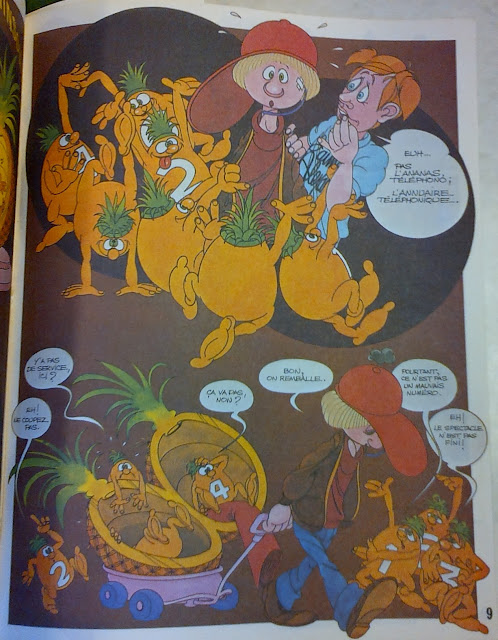 So obviously, due to a misunderstanding between l'ananas telephono (pineapple telephone) and l'annauaire telephonique (telephone directory), we're treated to this delightful display of visual nonsense.  However, wordplay is trickier to convey in other languages.  It would be extremely difficult to find a verbal pun that could have a similar meaning between pineapples and telephones.  So the obvious solution after the cut was this: 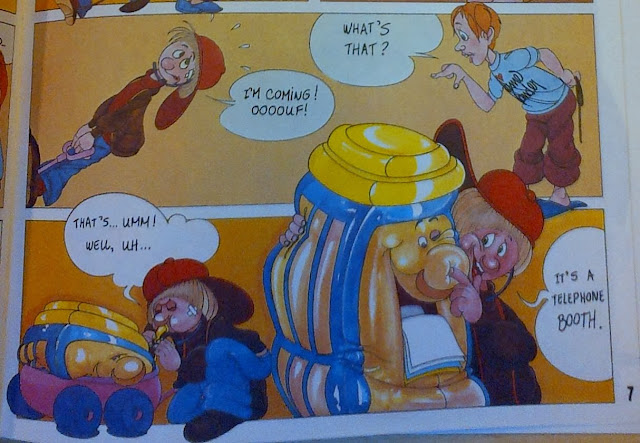 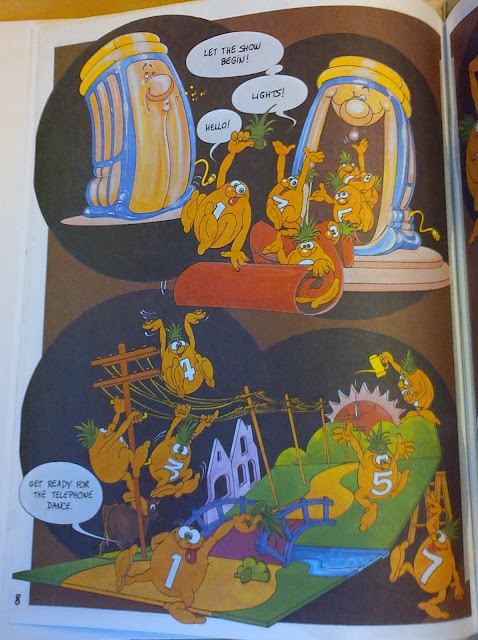 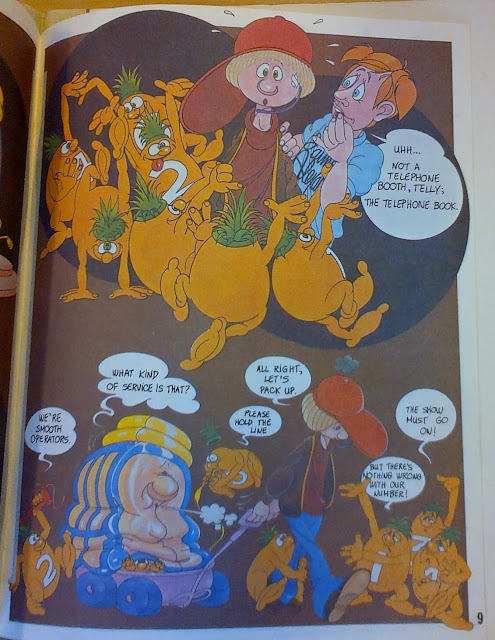 Not many people would go out of their way to redraw a page that was already done, but Claude Gagne managed to do it.  Of course, this doesn't explain why a chorus of numbered pineapples tumble out of the phone booth for no reason at all.  Now do you see why I showed you the French version first? 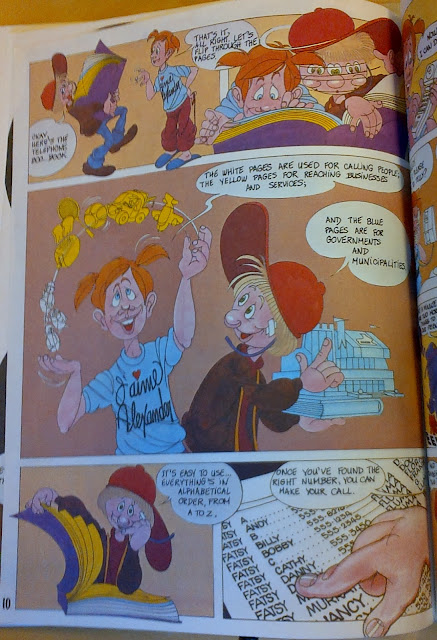 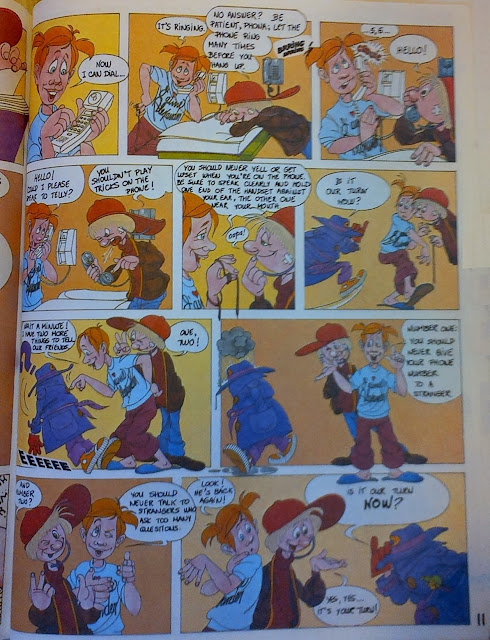 We're finally back to the iconic representations of the numbers seen earlier, though this was slightly confusing, since Operator and 911 seem to serve the same functions.  Nowadays, you're more likely to use 911 than Operator for anything declared an emergency.  Even though it's only one digit (with one button press for 911 being possible on speed dial), its more closely associated with finding numbers of certain people than anything else. 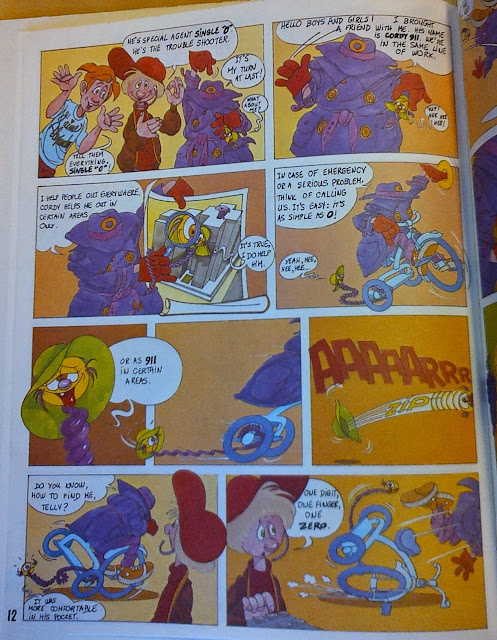 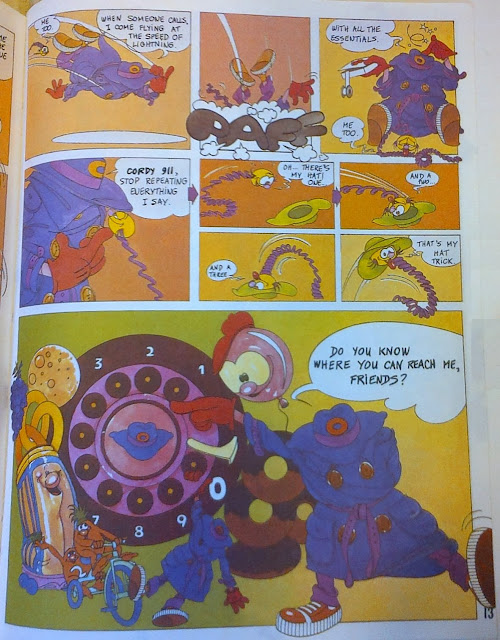 The only change on this page from the French edition is the usage of a pineapple being wheeled around.  Of the two, which would you prefer - an expressive phone booth or a static piece of prickly fruit?  I'll leave that redundant question hanging. 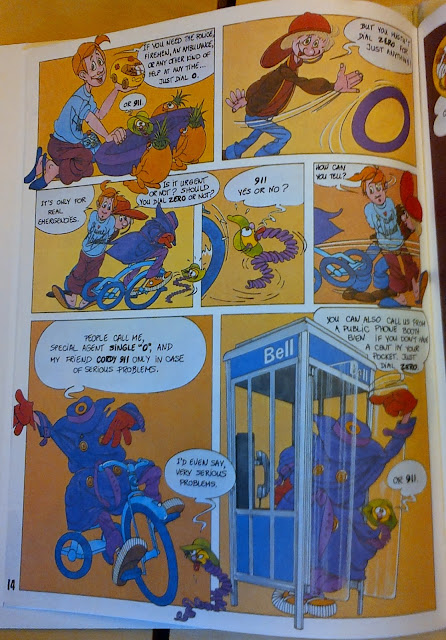 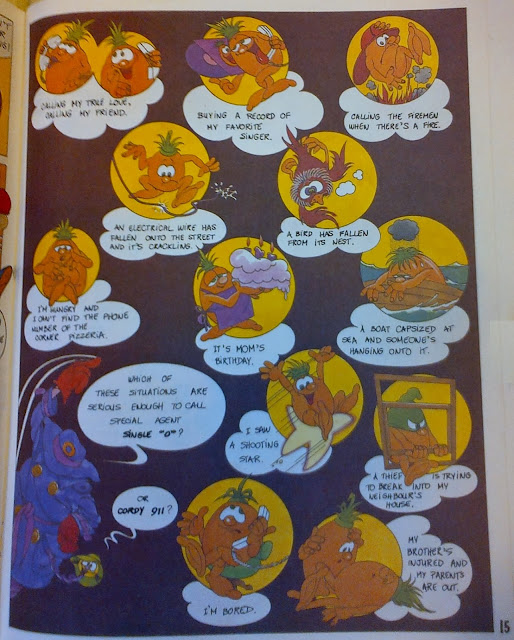 And here we have the reason why the pineapples couldn't be simply edited out.  They were too large a part of the examples to be removed entirely.  What I particularly like about this page is that there's no answers to look up.  It asks you to use your common sense and figure out these scenarios yourself.  If you can't, you're probably not responsible enough to be handed the reins (or wireless cord) of a phone. 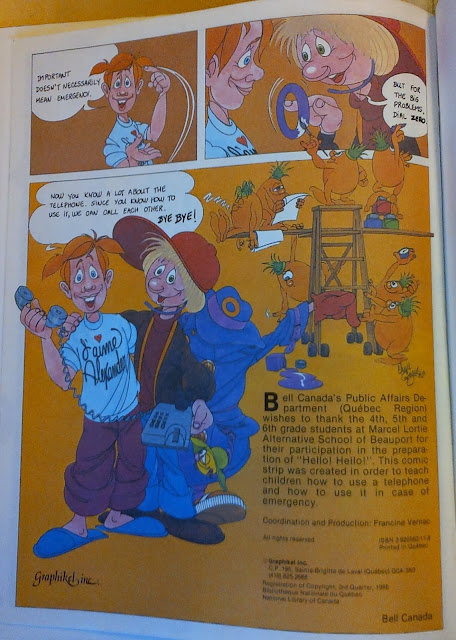 And that's the last anyone ever saw any further use of these cartoon figures.  It's kind of a shame.  Its the little touches that really help sell it.  From Phona's casual playing with Telly's shoelaces to Telly's inner turmoil expressed in the form of a warped balloon to the casual background events happening onscreen.  It all manages to come together, and I hoped there would be more of this kind of informative pamphlets.  One wonders what modern representations of other 3-digit emergency numbers such as 411 (information), 611 (troubleshooting) and 711 (Deaf communication) would be portrayed as. 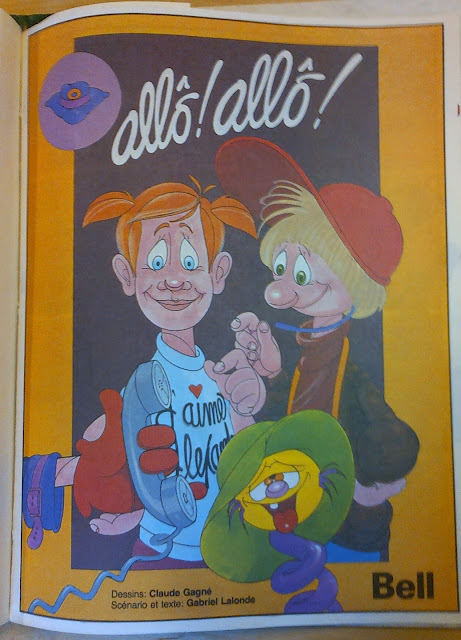