Recently, there was a twitter that pointed out the uncanny valley that exists in the brief moment where Simpsons characters turn their heads to the other side: 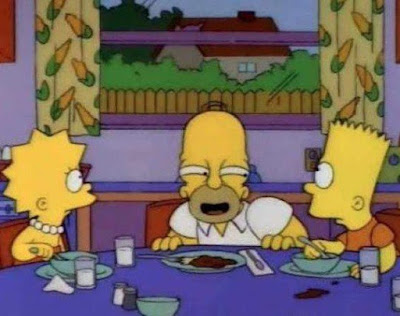 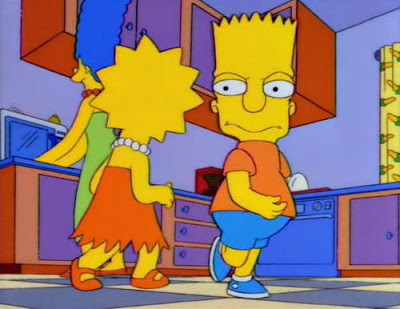 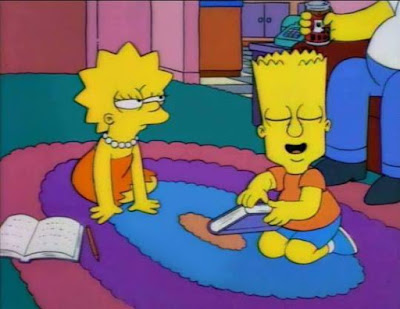 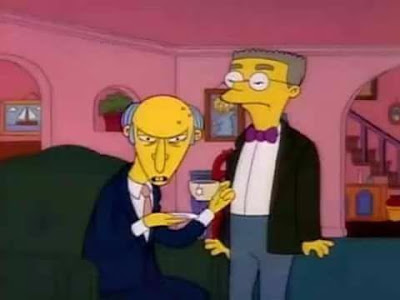 For some reason, it usually happens during that most embarrassing moment of blinking while taking photos for your driver's license or yearbook. 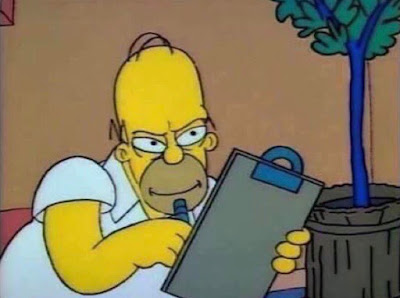 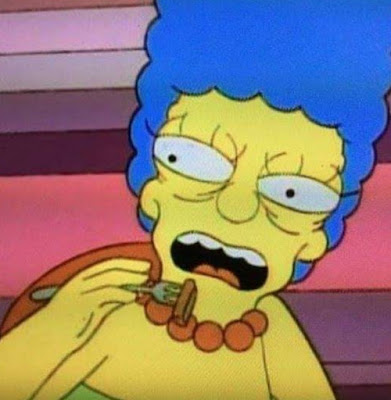 There are some exceptions, when it's intended for the camera to linger on their face, such as Dr. Hibbert asking if anybody could figure out who shot Mr. Burns.  (Can you?)  Personally, I'm a bigger fan of the more visible animation mistake where their mouths would be facing away, resulting in wonky faces looking in two directions at once. 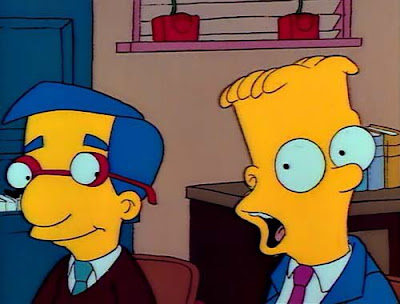 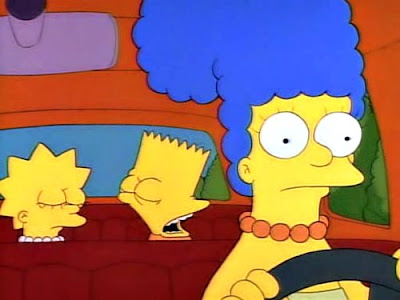 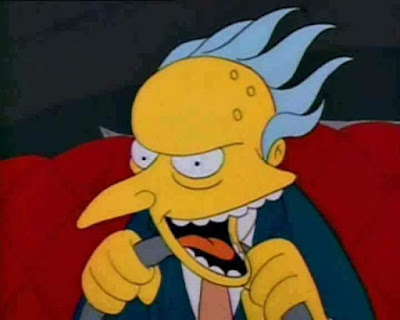 As it turns out, the Simpsons is hardly original in this field.  Pretty much every cartoon character is plagued with limited facial design that isn't fully developed beyond the minimalist easy-to-copy sketch image that falls apart under scrutiny. 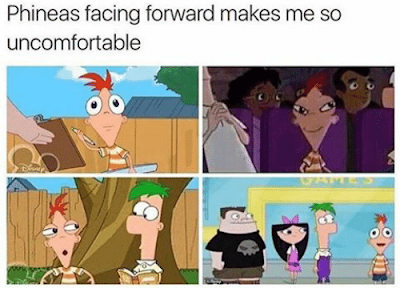 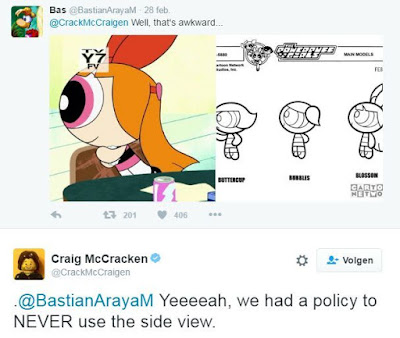 This is reminiscent of the unusual proportions of Akagi, who looked perfectly normal head on, but had an awkward jutting chin, just like everybody else in the Fukumotoverse.  There's a reason why the most virulent defenders of adhering to artist's production keep showing their characters at a three-quarters view, not only because it's easier to keep their looks consistent, but also to avoid uncanny mistakes that'll result when the animation sheets fail to consider the inbetween moment when they fall outside that norm, since their whole model falls apart if you stare too long.  There's the old joke of actors telling the camera to "capture their good side", which approximately works here. 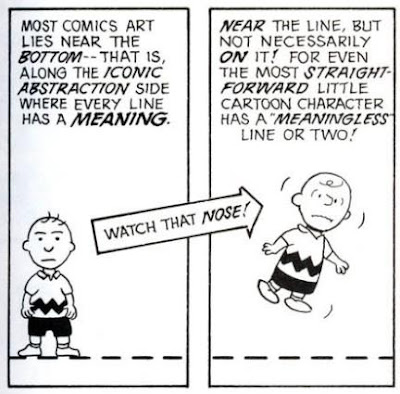 This could explain why there was so much resistance to 3-D animation, not only because it was a new field that threatened the old production model, and reduced the chance for those amusing stretch-and-squash animation blurs, but also because it increased the chance of emphasizing problems of the cartoon characters approaching a level closer to reality that was never intended.  I'm reminded of Boulet's 24 hour comic showing the technological problems of having Popeye face the camera full on.  They don't actually show up until halfway through, but they're all gold.

Eventually, a 3-D cartoon of Popeye AND Peanuts was successfully rendered, bypassing the lumpy design of Popeye's face by de-emphasizing the bulge of his jawline.  It's not only iconic cartoon characters who fall prey to this, but Manga characters have certain unusual properties that don't directly apply elsewhere. 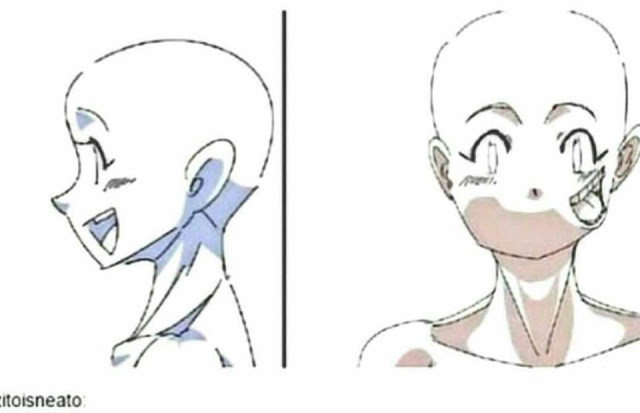 Ironically enough, the one character who exemplifies the sideways Manga Mouth naturally would be Cerebus the Aardvark, who's quite capable of speaking out of both sides of his mouth.  Here's an instance of him eating normally, which involves chewing sideways. 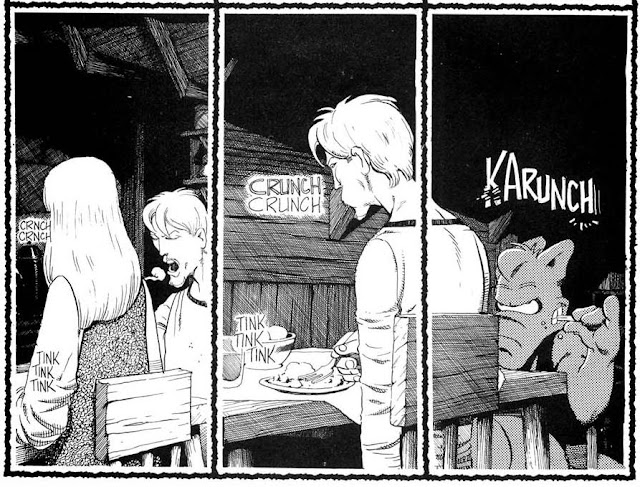 And here he is again, in a rare moment of silence in the otherwise wordy epic at the climax of Church & State II.  There's no open line separating the boundary underneath that hefty snout of his. 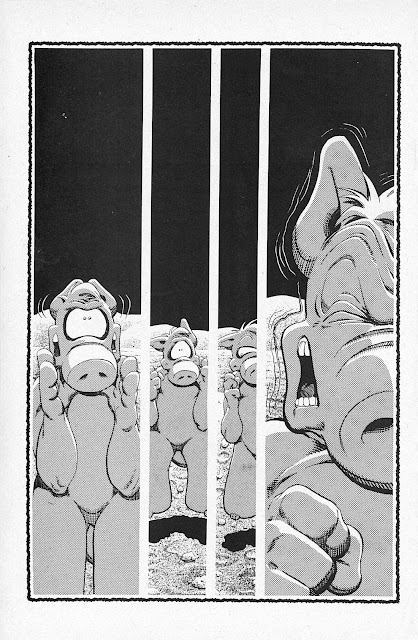 Given the lazy shortcut that WebArtists and budding cartoonists adhere to in looking for the next doodle that'll make their big hit, this is a problem that's not going to go away anytime soon.  The alternative would be to create a comprehensive model sheet that'd capture every possible facial muscle and perspective as seen from any angle, which would cut down on their creativity, and who has the time?  How often does Lackadaisy update anyways?  (Okay, every page is an artistic masterpiece, but still)
Posted by DeBT at 8:32 PM