One of the problems with exploring age-old properties is that oftentimes they display problematic morals values dissonance that doesn't play right with a world that's mostly moved on.  It can be the unfairly racist caricatures of background characters.  It can be the usage of unfortunate obscure slang that had different meaning back then.  And it can be the portrayal of relations regarding women. 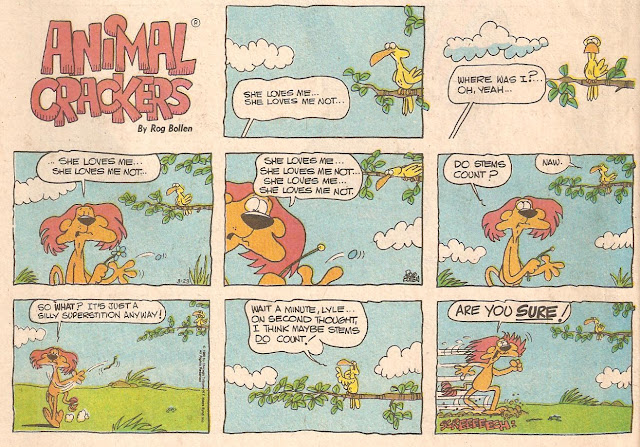 In this age of #MeToo of women calling out their sexual abuse at the hands of men in positions of power that they were helpless to refuse, such Woody Allen types are no longer in vogue.  Particularly the persistent type that feels entitled to have the object of their desire accept their unwanted advances, having been spoiled by the likes of Steve Urkel who expect their crushes to fall all over their rightful obsessions. 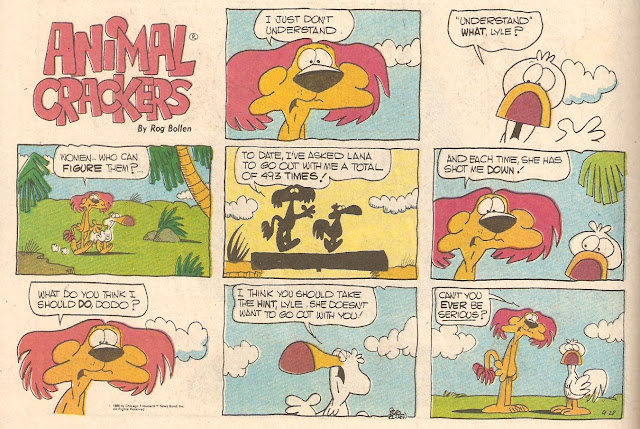 When Animal Crackers started out, it wasn't exactly breaking new ground, but playing on the same tried and true conventions of typical Newspaper comics that would define what little quality it had. 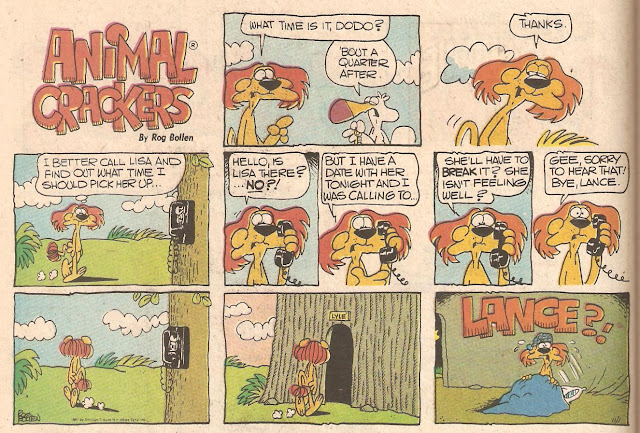 Basically furthering the notion that women were little more than the ultimate trophy prize to reward them for all their struggle they'd work so hard for.  Also supporting the myth that these women lusting after these jerky athletes are only looking at the surface, and not appreciating the obvious future catch of these unappreciated nerds with their sensitivity underneath.  Nevermind the sheer hypocrisy of their ignoring anyone who'd like them for what they are.  "I deserve the hot one!" 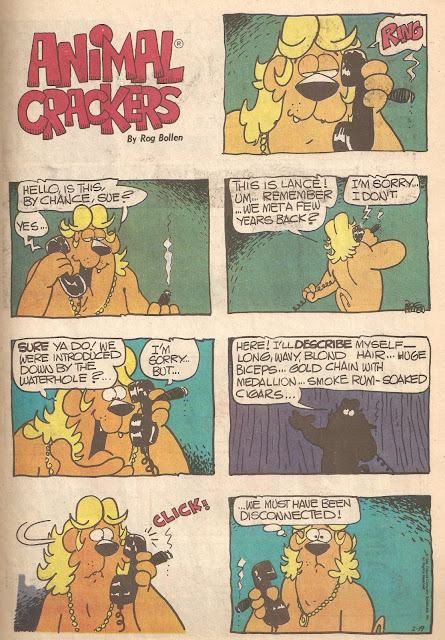 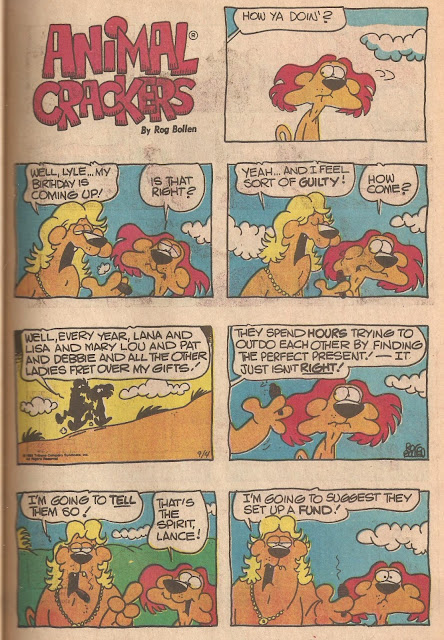 Clearly, this could be avoided by just listening to the women in the first place instead of unsuccessfully mindreading what their thoughts and needs are through reductionist media.  But that takes effort, and who has the time? 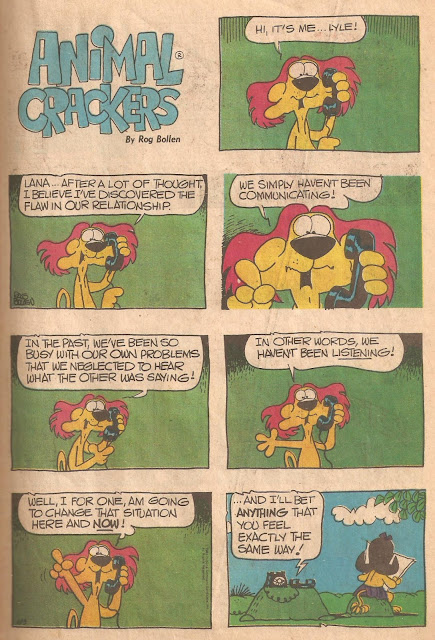 This is the first appearance of Lyle's rival, Lance L. Lion, who's just three letters removed from being as egotistical as J. Jonah Jameson, and one letter too long for being a Superman background character.

The dominance of a Lion over his tribe is constantly threatened by the younger generation, so the elder will wean out the competition by indiscreetly murdering the babies of the last parent who was in charge.  Nowadays, we are a more civilized nation, but I'm sure we can all agree that Lance could've used some natural selection of his own.

Most cartoon characters have the dint of having some sort of appeal, but Lance has no redeeming qualities.  He's a one-note character, and not even a good one.

He puts down Lyle at every opportunity, emasculating him at every turn.  He shows no respect for women, save that they're available for easy dates.  He's constantly smoking cigars and wears gold chains.

If you recall, the tally for the number of times Lyle unsuccessfully asked Lana out was a mere 493 times.  However, this appeared in 1981, while the former Sunday comic strip appeared in 1983, so the number actually went down for anybody paying attention.

Right off on being told that his competition is horning in on his inaction, Lyle starts tailing the couple clear out in the open.  Stealth check failed.

Normally, in these situations, the male is easily too intimidated in the presence of a Maniac Pixie Girl who can be overwhelming and overbearing.  However, Lyle sees no problem in getting free and easy praise where he normally found none.

Considering how affectionate Lisa is towards Lyle, there's no reason for him to ever want to go back, so why would he ever want to go out with Lana ever again?  He's probably doing it out of the kindness of his heart, so she won't wonder what happened to him.

If Lyle's intent was to make Lana jealous, then mission accomplished.

So what does a spurned girl do?  Engage in passive-aggressive gossip and become insufferable to the environment around them.  That's what all women do, right?

And deny that anything is wrong with them.

"I demand that Lyle ask me out three more times!  My OCD demands it!"

After enough self-pitying from the rather unsympathetic Lana, we finally get some screentime with Lyle and his new hottie.

... for about one day before shifting attention elsewhere.

Our first hint that there might be trouble in paradise.  Even though Lyle is perfectly content, Lance simply can't help digging his grubby paws in every openly willing female available.  And then the scene suddenly shifts back to Lana, as if her moping hadn't been played out enough already.

Strangely enough, there's a whole three weeks before the story decides to come back to Lance finding a sudden interest in Lyle's new girlfriend.  The above strip was in August 29, and the bottom is September 18.

Surprisingly enough, throughout all this, even though this is Lyle's big moment, we hardly ever see much interaction between him and Lisa.  Well, we'd better rectify that situation right now!

In case it's not entirely clear above, Lyle's arm is stiff from putting his arm over Lisa's back/shoulder for such a long time, hence the 'stars' of pain in the last panel.

And then the two spotlight stealers wind up meeting each other from clear across the blank expanse.  It's not even done with the intent of making his ex-unGirlfriend jealous - they just happen to be in the same vicinity.  That's the problem with having a Maniac Pixie Girlfriend - they're particularly fickle and prone to listening to their compulsive instincts.  One possible interpretation is that Lana did this on purpose, but here expression says otherwise, as if she's realizing she may have made a horrible horrible mistake.

So things revert back to the ol' status quo, just as intended all along.  This is the longest Animal Crackers storyline ever, and it's mainly regulated to keeping sex symbols in their rightful state.  Some comics simply aren't worth the paper they were printed on.