Just a few things that needed additions to some of my previous posts.  First up, I mentioned that there was a missing Mr. Boffo comic regarding the Homeless tribute.

Turns out there was also a Marmaduke I missed as well. 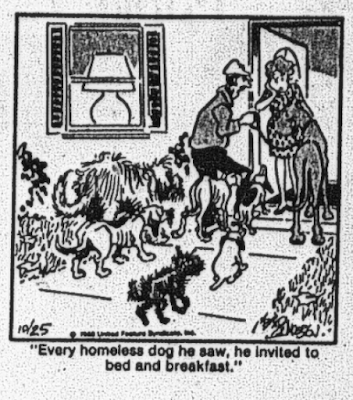 Next up, is another minor mistake in a page that I just noticed.  It's one thing when the author is unable to make his intentions clear to the artist, but it's another thing entirely when the artist is in charge of the story.  Such is the case when it comes to the glorious trainwreck that is Neal Adams' Batman Odyssey. 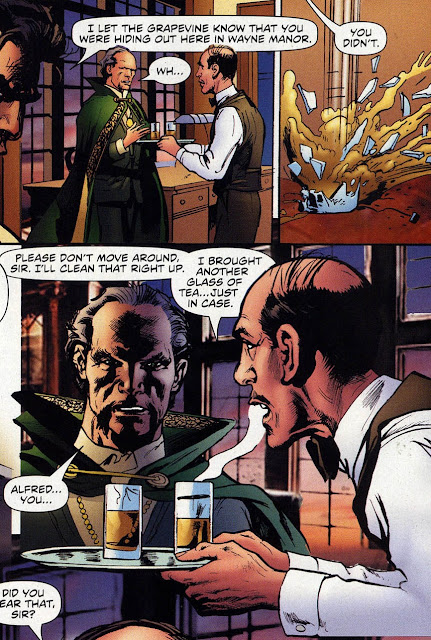 Can you see the problem here?  If not, I'll spell it out for you.  Ra's Al Ghul drops a drink on the floor, bottom first, yet in the very next panel, there's two glasses of tea still on Alfred's plate.  Alfred may be the world's best butler (next to Richie Rich's Cadbury) but I very much doubt he managed to whisk up a spare glass without leaving his position.

Next up are some more comics showing thinner versions of normally fat characters.

Somehow, the idea of a thin rendition of Broom Hilda is considered too disturbing to consider.

Now, for the biggie - another similarity found between For Better or For Worse and Cerebus.

When examining upcoming old strips, it was pointed out in a recent comment on the FoobiJournal that Martha had similar handwriting to Michael:

No wonder Martha had concerns about being intimidated by writing a letter to Michael when he was on the farm, since their cursive was practically identical.  Later, when Janet, one of Martha's friends wrote some correspondence acting as arbitrator, it occurred to Lynn that she should differentiate the handwriting between the two.

Later, when Michael writes from University, Elly seems to take full advantage of cramming in as much writing as possible, believing that the worth of a letter comes from how much effort you put in them, and not what you say.

Later, April would carry on this proud tradition, despite the advent of technology and email, allowing for faster communication.  But that would detract attention away from Lynn's limited life experience.

A close survey of Elly's handwriting showed some unsurprising similarities as well.

Especially when compared to Lynn Johnson's own very revealing handwriting:

All of this is to showcase a page from Cerebus in Church & State where Bran Mac Muffin (Cerebus' most devoted follower) pointed out that in the realm of miracles: "A discarded letter written by a young girl in the Lower City, a listing of my baggage from the carriage driver who brought me here, a listing of room charges from the desk clerk..." 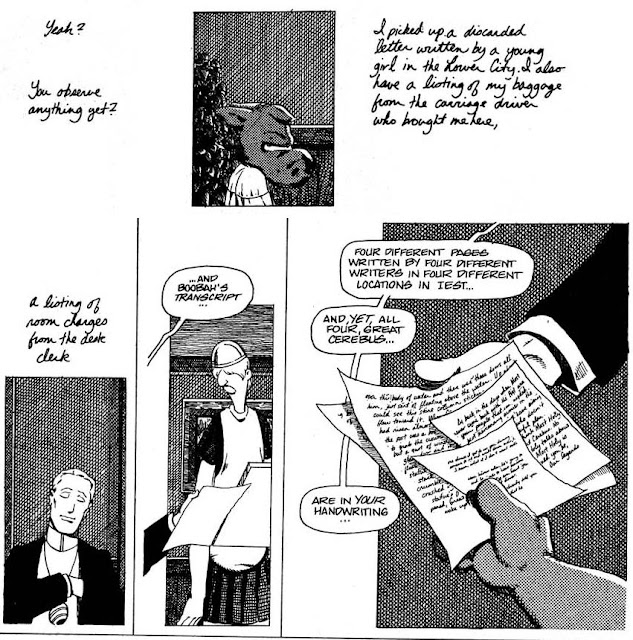 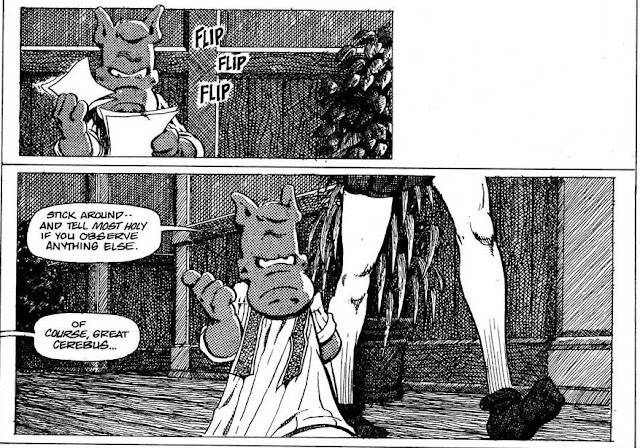 Naturally, Cerebus calmly takes it all in stride.

Back when Dave Sim was still reasonably sane, and was in the process of mastering his lettering later on, he figured that this convoluted way of overcoming his early limitations was the best way to combat his fans obsessive nature of over-analyzing every piece of nuance from his work in progress by beating them to the punch. Incidentally, this quasi-4th-wall breaking scenario is never brought up again, though it's hinted and alluded to in the definitive identity-revealing volume MINDS.
Posted by DeBT at 8:59 PM