This week, during the For Better or For Worse rerun, we got a comic that wasn't included in their collection:

On the FoobJournal, it was speculated that this comic might've been aimed at Lynn Johnson's kids.  Oftentimes, the only way for the family members to get an idea of what was bugging their mother was to read the strips in advance, otherwise, they'd be hit by the themes six weeks after the fact.  In this instance, this moralistic message of "Appreciate what you have, since others have it worse" was actually another collaborative approach with Cartoonists to devote attention to the Homeless problem.  This happened on October 25, 1988, a year after the last Famine effort failed to attract larger numbers.

As usual, we'll start with the better-known works, and work our way through obscurer titles. 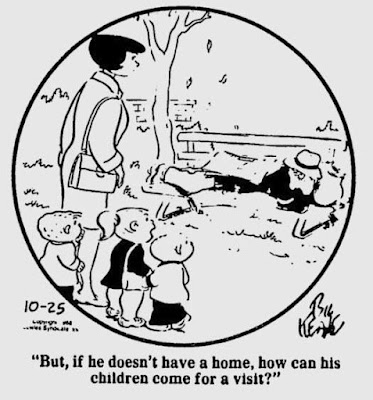 Its sad to think that the above comic still remains relevant, back when politicians were less corrupt and more competent than the are now.

Of the multiple comics shown so far, only Doonesbury managed to keep a running cast of actual Homeless people, Alice and Elmont.  The former was physically similar to elderly politician Lacey Davenport that a later storyline was done having the then-Alzheimer suffering Republican mistaking the homeless lady for her sister, indulging in a brief Prince & Pauper role switching.  I only bring this up, because of another character who shares some physical similarities.

Most serial stories didn't bother to shoehorn the Homeless factor in, but the few that did, did so in a way that didn't fully detract from their story arc.  The most notable being Tom Batiuk's Crankshaft and Funky Winkerbean.

Some comics put their spin on the issue through their cynical worldview.

Jeff Martin's Mr. Boffo has had countless examples of Homeless people comics, so I didn't feel compelled to save the one I saw in Microfiche, but found one of his other comics, reproduced below.  Someday, I may go back and fine the missing Boffo comic.

Even wild animals who roam the woods & countryside had a word or two to say about the subject. 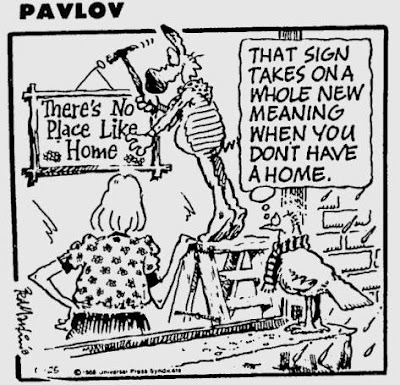 Henry just basically puts a band-aid on the problem - by making a birdhouse, since people are more likely to support dumb animals than actual human beings. 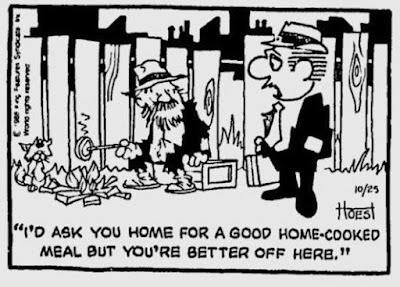 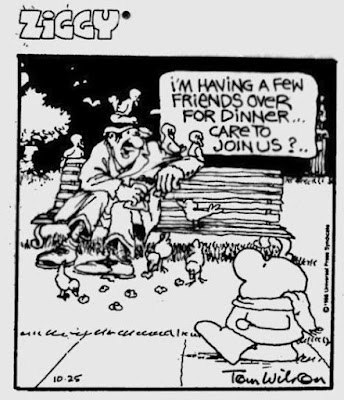 Fun fact - this Sally Forth comic actually came a day earlier on Monday, but I included it, since it thematically fits.