Sally Forth's art tends to be rather static, with the characters reusing their poses with side-eye looks and smug smirks.  So, on November 12, 1991 when it suddenly changed into a more dynamic art style, people were confused, myself included.

Since this was around the same time that Calvin & Hobbes was going into reruns, I thought that Greg Howard had taken a brief vacation, and was rerunning old strips in his absence.  The truth was much more mundane - he'd taken on another artist, Craig MacIntosh, to assist him, while he focused on the writing, splitting the job between the two of them.  Hence, where "Howard and Mac" appears in the margins, when it was just Howard's signature.

Sadly, it seems that not everybody was enamoured with the new art style, and wanted a return to the stiffer posing they were all used to, which I consider a shame, since I found the looser art to be more dynamic.  Even if Hilary was presented more as a child than a teenager, due to her sudden stunted height.

Even though the experiment officially ended on November 30th, the Sunday comics didn't get the abort memo, and resumed their regular schedule for three weeks from December 1st.  As a tryst for exploring new territory, it was a welcome change. 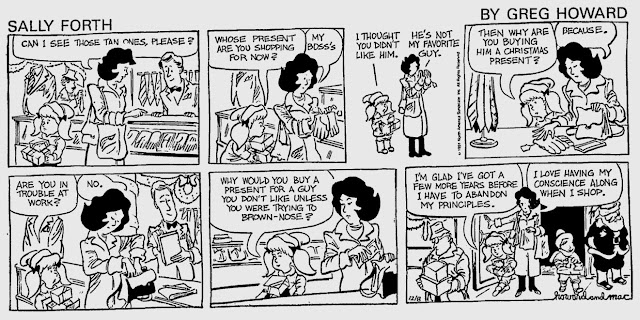