One of the things that bugged me when reading daily comics was the rare occasions where a printing mistake would happen.  This wasn't the garden type variety where a caption would be switched with another, resulting in some dadaesque results, such as what happened with Dennis & The Far Side.
If a Newspaper comic happened to make a mistake, you couldn't go to another source to find out what really happened, since they were oftentimes the only place you could find them.  (Which oftentimes, was the appeal of Newspapers in the first place - offering comics the competition didn't)

Back in the olden days of Dinosaurs when Encyclopedias were bound in book form (Yet weren't called Thesaurus, since that name was already taken), the Internet as we know it hadn't been fully fleshed out for it's potential in porn, so if you missed a comic in the Newspaper, the only way you could find out was if the paper was generous enough to print an explanation the very next day, if enough complaints happened to reach their headquarters.  More often than not, papers weren't as generous with explaining any potentially confusing comics, unless they'd been given advance warning for excluding certain potentially controversial comics, such as Lawrence's Gay Reveal, or Doonesbury's multiple political subjects. 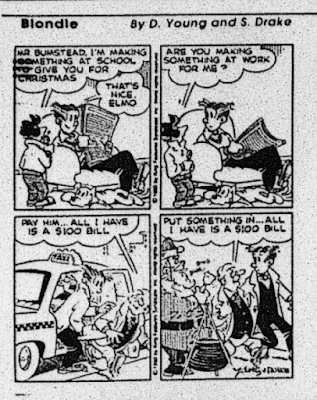 At first glance, halfway through the comic, the scene shifts away from Dagwood talking to Elmo, to suddenly getting out of a Taxicab with his Boss.  The explanation is these are actually the setup to two different comics accidentally combined together without any comprehension, rhyme or reason.  It was basically Randomized Garfield before Randomized Garfield existed.  To make matters further annoying, the latter strip was printed in full the very next day, but gave no resolution to the previous strip.  I didn't get to find out what the punchline was until over twenty years later.  You're luckier - you can just compare and contrast with the full comics below. 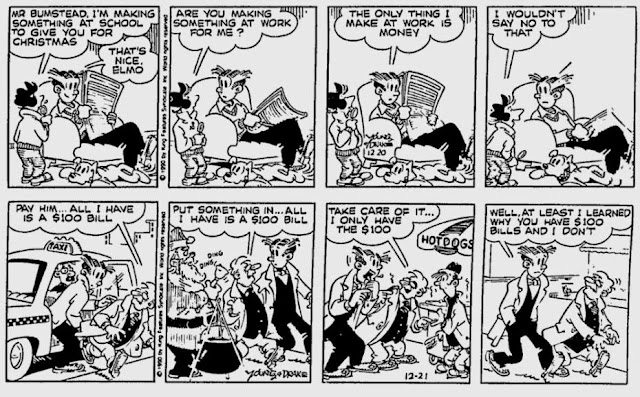 Another Blondie mistake can be seen below: 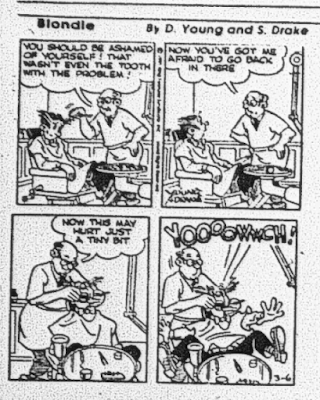 At first glance, Dagwood screaming seems to be the punchline, with what looks like to be a rather weak setup.  But if you rearrange the above and below panels around, the sequence will make more sense.

Of course, panel mixups in Newspaper comics is nothing new.  But there's also the aspect of misplacing entire comics entirely.  To give an example of this, here's a cutaway view for January 1, 1990 and the surrounding comics. 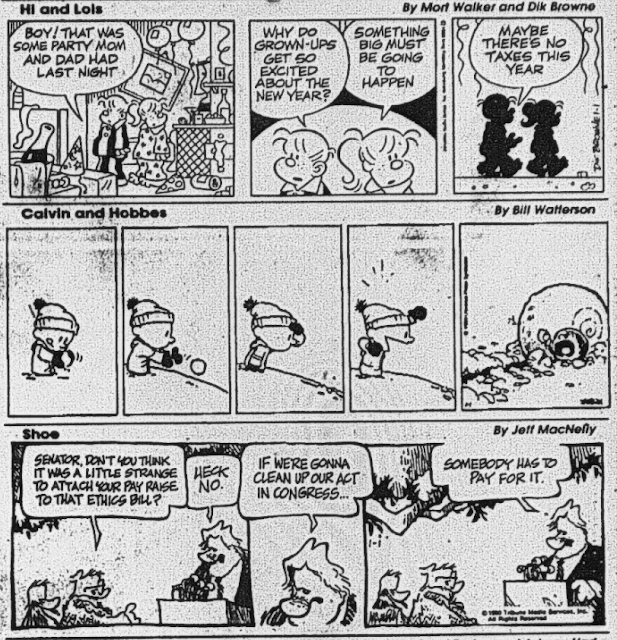 Now, here's the comics page three days later on January 4th.  Can you tell the difference?  Or rather, what's stayed the same? 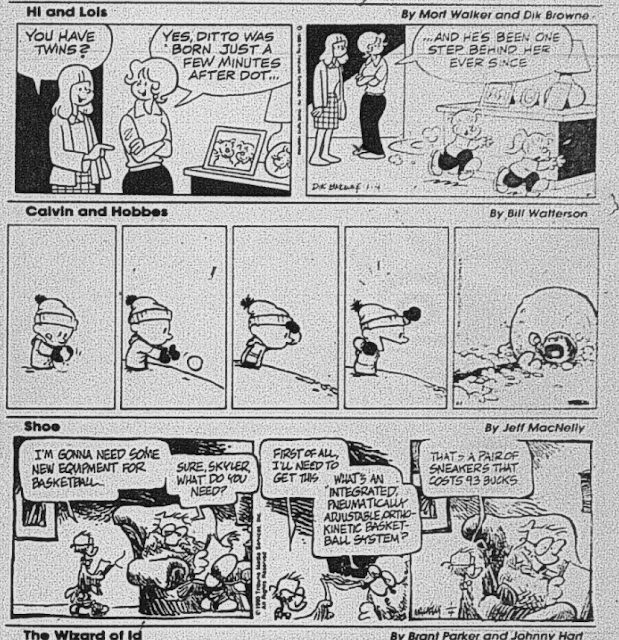 For some reason, they reprinted Calvin's Monday comic on Thursday.  It took me until the Comic Collection Scientific Progress Goes Boink to find out what actually happened.  For some reason, Calvin dousing Susie with a domino Snowball was considered more acceptable than assaulting her with a shovelful of snow.

There were other instances where comics had the order they were supposed to appear switched.  In most cases, this had no effect whatsoever with their story.  For instance, here's the Adam that appeared on July 12, 1990, when he was exercising in a Gym that had Babysitting services, which he took advantage of:

And here's the comic that appeared the day after.  (Side note, the latter was in a book collection, but the former wasn't)

But here's how the comics page appeared on November 13: 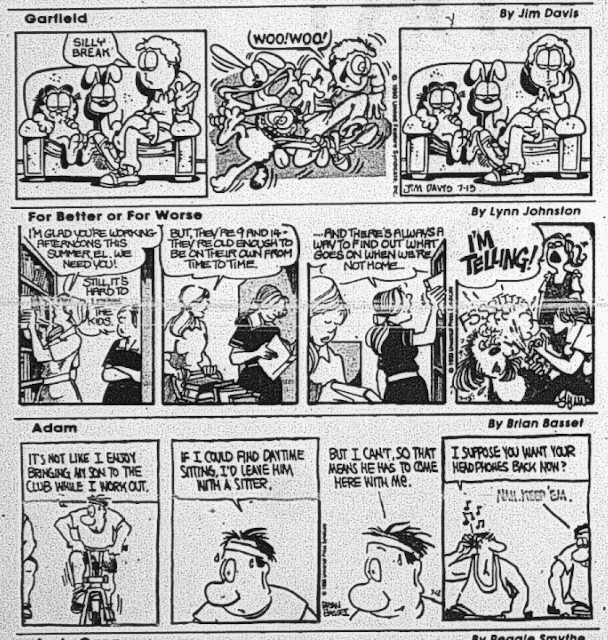 As you can see from the above comics Garfield & For Better & For Worse, the dates are ALL for July 13th, but the Adam strip is for July 12th.  Which means the headphones were handed back to Adam After he took decided to use them for marketing purposes.

But these are minor nitpicks aimed at daily comics that are for the most part, pretty self-contained.  The one comic I most wanted to point out that fell prey to this kind of slipshod maneuvering that has a story arc that is certainly infamous around Internet comic circles.  Particularly around October 23, 1989.  But you'd never know that from the innocuous opening here: 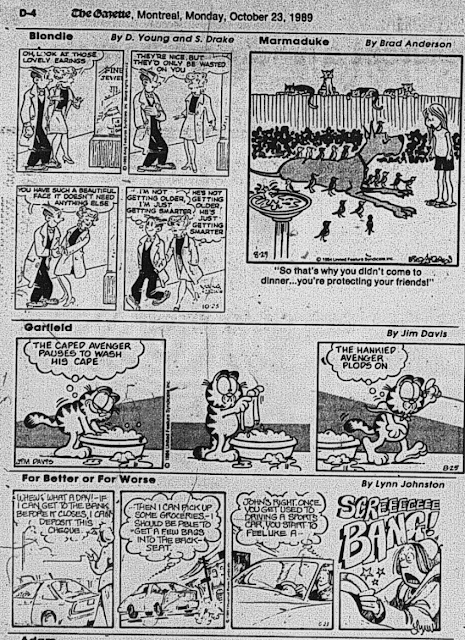 Okay, so apart from Elly crashing her car, there doesn't seem to be anything entirely out of place.  But that wasn't until the very next day that a certain sense of wrongness seemed to manifest itself: 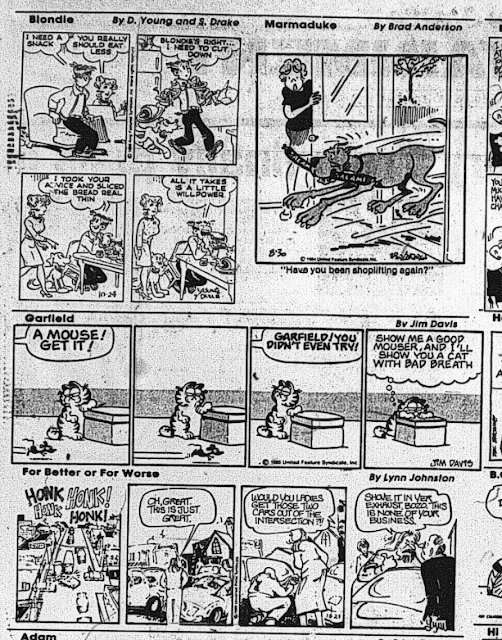 A 4-panel Garfield comic?  You hardly ever see those happening.  It's closer to a Sunday comic if anything.  And Garfield's character design seems to harken to his earlier draft. 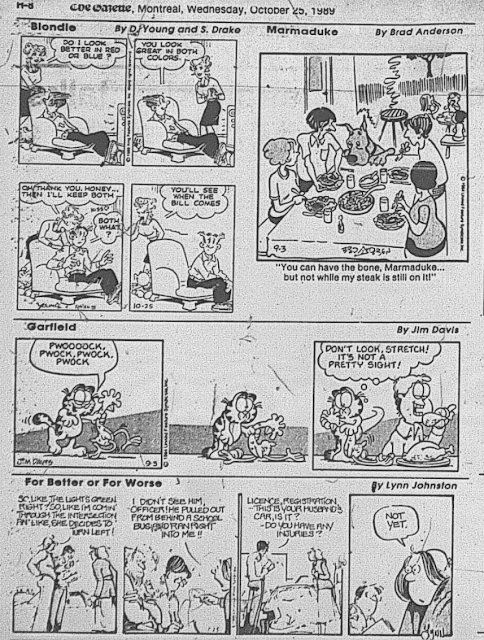 By Wednesday, Gerfield reverts back to his familiar design, which is actually a rerun.  For some reason, Marmaduke seems affected as well.  It shares the same date - September 3rd.  Whether there was a similar controversial theme happening there, it doesn't seem to be obvious.  It wasn't until Thursday that I got the sense that there was something very wrong happening here: 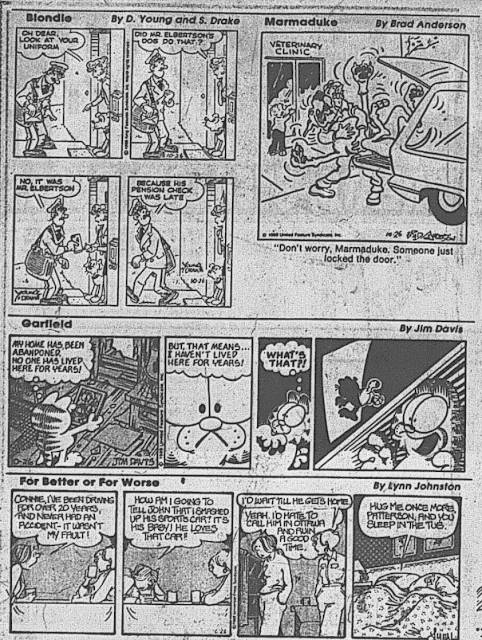 Yes, you read right - I got a bunch of unrelated out-of-sequence Garfield comics on the one week when it was vital that they arrive in order; meaning I missed out on all the setup to Garfield's infamous Halloween sequence.  Fortunately, after this horrendous misstep, there doesn't seem to be any more noticeable mistakes on the Comics Page (that I can recall), but this is the one that stuck in my craw the most.  This was bigger than missing out the punchline to a nonessential daily strip.  This was getting the setup to what was essentially an actual horrorshow from one of the tamest enjoyable comics in the Funnies.  And I didn't get to experience it on a daily basis.

Just what editorial decision led to replacing the essential Garfield comics for this week without any preparation or fanfare, I can't imagine.
Posted by DeBT at 8:50 PM