In recent comics, there have been instances where Marvin has been shown talking to babies, and even the Family Dog, but rarely to his parents, with rare exceptions. 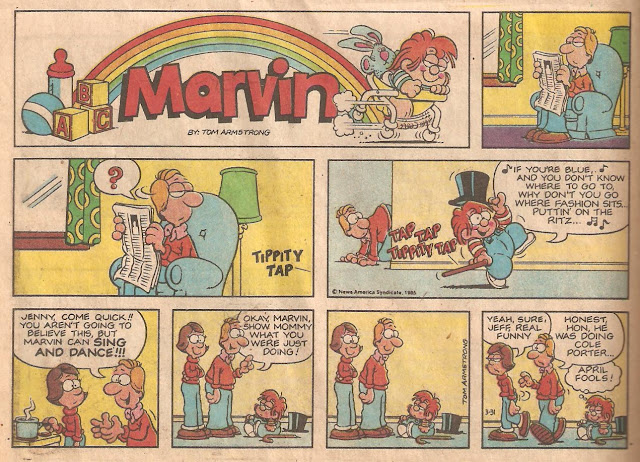 When Marvin DID speak, it was usually at the expense of a joke.  Like Maggie being the only Simpsons kid to call Homer 'Daddy' when no one was paying attention to her.  Only, you know, more filled with mean-spiritedness than pathos.

But there was an instance where Marvin suddenly gained the power of speech in full view of his Father, and made no attempt to cover it up.

All those years of pent-up silence was obviously the result of having nothing of substance to say.  And THIS was the apparent moment to respond to a perfectly inane request.  You'd think that after all those years of silence (save for crying at night), Marvin's first words would be of higher quality.

So, having had a chance to have a heart-felt conversation with his son, what does the Father think?  That his baby's a natural-born prodigy?  Enroll him for an early scholarship?  Hah hah, nope.  Indulge in Moichendising!

Child Prodigies have a tendency to burn out quickly, due to too much attention, pressure and demand on their still-budding talents.  Especially in a fragile state where they're likely to do all of their parent's bidding.  (What genius is going to say no?)  So, better make the most out of them while you still can!

Isn't that just typical of men?  As soon as a big secret is revealed, their first instinct is to hide it from the women, who'd very possibly overreact from such a revelation.

Which winds up being a moot point, since they wind up telling her anyways.

And even more moot when word leaks out to the world.  Keeping a talking baby under wraps is harder than you'd think, since everybody and their mother want to tell their friends and their foes about a 1-year old with coherent vocal chords.  This was clearly inspired by Look Who's Talking, and Look Who's Talking Too, the latter of which was just released in 1990 the year this comic saw print.

Marvin's ability is so impressive that he's featured on multiple magazines and newspapers, two of which have Roseanne in their subheadlines.  Pay attention to her measurements in the 1st panel:

Marvin's status improves to the point that he goes on talk shows that are no longer around.  He's now outlived the caricatures these people are based on.

The implications of this are downright disturbing.  Marvin is already considering getting married to someone just so he can get rid of them later for added publicity.  In an era where Hot Mamas are a desired trait, Marvin's mother has been safely left off the radar, because Toddlercon isn't a taboo enough subject that's gained much popularity anytime soon.

And of course, it does so in the most disappointing manner possible.  So much for changing the status quo!