I've written about Skyler's experiences at Summer Camp, which always turn out to be little more than Army Camps.  Though the collection of Camp episodes only went up to 1987, Skyler's unintended adventures out in the so-called Real World continued.  I'll be filling in the gap between 1988 and 1990.

But first, a Sunday comic from an earlier post that I stupidly missed when Skyler went out into Space:

And now, on with the show!

In this case, Skyler doesn't even entertain the possibility of being able to escape Camp - the Mountain winds up coming for the Molehill anyways.

Every year's camp is slightly different in some way.  This year, Skyler discovers that the best way to avoid being picked on is to develop a Percussion Complex.

However, even before the whole adventure gets started, there was a Sunday comic the day before that already forecast what Skyler was going to be getting into, spoiling what he would be getting himself into.  Even when he thinks he's got it all figured out, he still winds up getting screwed.

Eagle-eyed people who bother to download the stuff I find will notice that the dates August 15th and 18th are missing.  not to worry - those were superfluous extra strips not related to camp.  One of them even had Skyler back at home commenting on his uncle's choice of turtleneck clothing, so you're not missing much.

A major part of finding these comics involve a great deal of cleaning of the numerous dust particles, newspaper grains, smudges and holes at the sides or bottoms of pages.  Oftentimes, I get annoyed at the presence of inconspicuous dots in word balloons and feel the need to remove them.  In this case, I probably shouldn't have bothered.

Even though Skyler's adventures ended at this point, he returned briefly to show up for a singular bookended Sunday comic that like the first premature Sunday comic, missed it's deadline mark.  These were one of the few comics I was missing from my personal collection, which is why they escaped my notice. 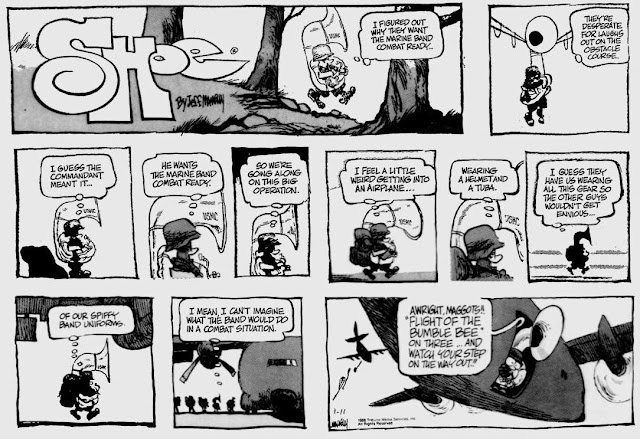