By now, you've no doubt heard of Ahmed Mohamed, the Muslim boy who was arrested over the crime of bringing an ambitious-looking clock that was mistaken for a bomb by his teacher, who then called the cops to arrest him for bringing such a dangerous-looking mesh of beeping wires to class.  Not like the good old days when a kid could bring a fully armed nuclear reactor to school with minor repercussions for exceeding expectations.

This has resulted in Ahmed being vindicated for standing up against the school's zero-tolerance policy, Islamophobia and racism.  Especially in light of arresting officers admitting that they knew that Ahmed's clock was just a clock, despite their repeated assertions and insistence that he was carrying an explosive device. 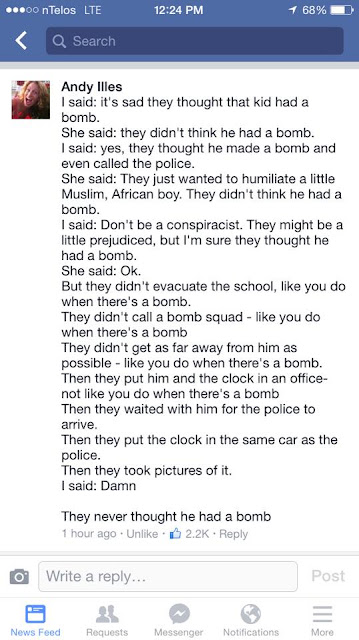 So far, Ahmed Mohamed's been commended by multiple supporters, including technicians, engineers, hackers, and even President Obama, who tweeted his input.  In retrospect, Ahmed's decision to change schools after being "welcomed" back after suspension doesn't look so foolish.  Given the choice, why would he bother going back?

To paranoid conspiracists (consp-racists), this sudden rise to meteoric fame gives a JUST AS PLANNED vibe, consisting of the following convoluted steps:

In addition to the above, one of these generous benefits was the offer of being invited to the North Alabama Space Camp.  Just last week, I posted comics of Skyler's last Summer Camp trip, which gave him PSTD symptoms, having never attended regular kid's Camp before.  While that was his last visit to a Military faculty, it wasn't Skyler's last Camping trip so far.  But the next one wouldn't occur for eight more years until 1999.

Originally, I was going to wait until next year to present these, but given recent events, it seems more relevant  and timely to show these now.  They might not be as amusing as other Skyler-centric camp stories, but it follows the same basic premise - unwittingly get yourself in trouble, and you'll be rewarded for your efforts.