Tintin is one of the most beloved comics read worldwide, it's material present in a surprisingly scant 24 albums (and one movie special) that has delighted audiences of all ages, long past the long-obsolete technological and political ramifications that these period-specific quests took place in.
And yet, there still remains a surprising amount of unreleased material that has long remained out of the casual audience's purview or knowledge.  Pure Tintinologists are aware of these, but for the most part, this deleted stuff is fascinating.  (Sadly, the Black & White reprints uses substandard translation that doesn't match the originals)  The brief forays into casual racism notwithstanding, the main bulk of left out pages comes from condensing the sheer amount of published material into more easily packaged format of a 62-page album.  (Which I've alluded to in detail in my definitive essay, Mathematical Equivalence of Comics)
That forced limitation for European-style storytelling has encouraged tighter storytelling, but also limited the amount of length a typical interesting subject could provide.  (Gag-based albums are further restricted to anywhere between 44-62 pages) Not unlike the forced publication of weekly serials (6 pages for 2000 AD, 16 pages of Shonen Jump, and 22 pages for the typical American comic)  Independent publishers have relaxed this series of limitations somewhat, and allowed for the addition of more pages wherever necessary. 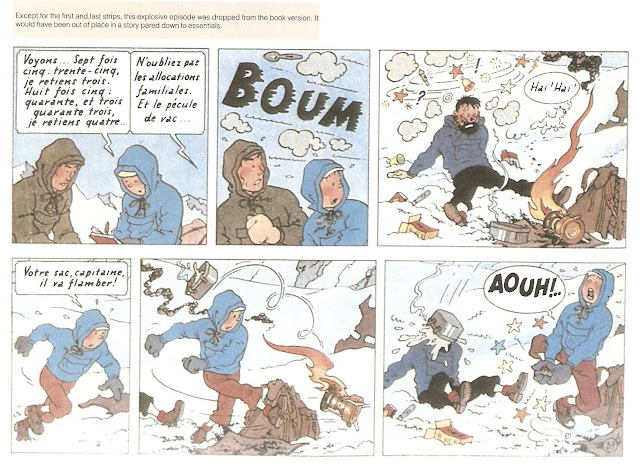 For the most part, most of the pages left out in a Tintin book can be considered superfluous, and filler boilerplate stuff intended to drag out the scene a little longer, and give the drawer some time to figure out how his spunky hero was going to get out of this little fix. 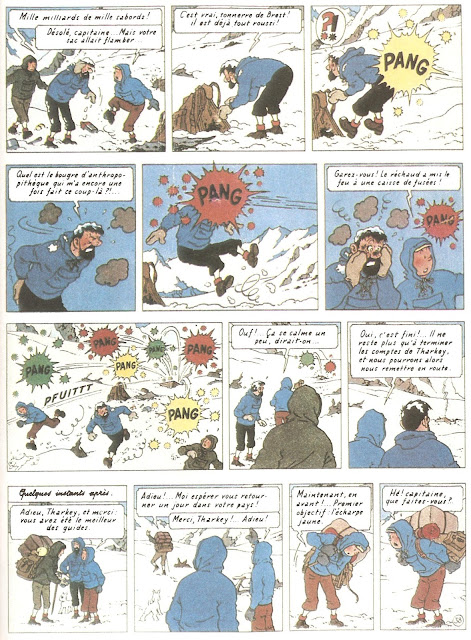 But in terms of sheer amount of available material, the bulk of unpublished stuff goes to Prisoners of the Sun.
Not unlike most comic serials, The Seven Crystal Balls started off by first being published as a daily strip in Le Soir.  And then, WWII happened, which forced Hergé to put his planned arc on hold, and his story wouldn't be continued until two years later, leaving the fate of further Tintin adventures and the mystery of the epileptic/catatonic explorers and Calculus' kidnapping unknown.  Fortunately, after the War, Hergé was pardoned for suspicion of collaborating with the enemy, which was absurd, since his stories were more anti-fascist than anything.  Incidentally, I find the reduced minimalist panel below to be funnier than the enlarged splash panel version. 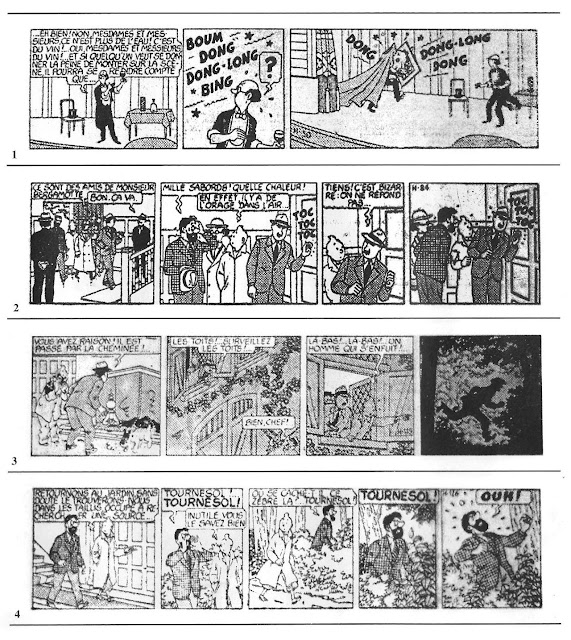 That forced hiatus may have proven to be a blessing in disguise, since it gave the author time to do some proper research (which greatly benefited his stories since The Blue Lotus) and go into further detail about The Incas, which would be described in footnotes to the side or below the page, taking up valuable space. 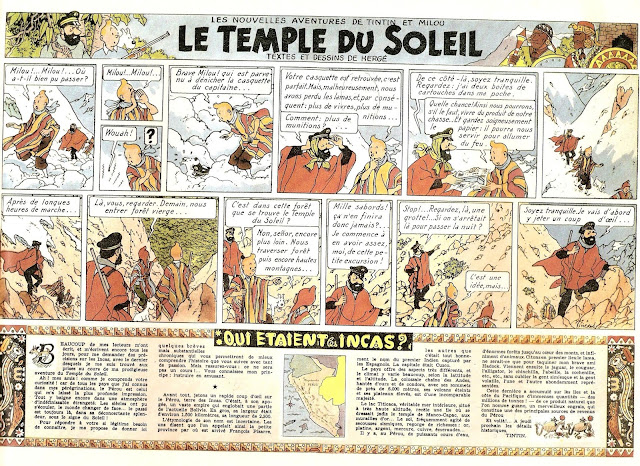 The tiny print is probably the main reason that this particular segment of Tintin hasn't been reprinted in English.  The amount of trivia would only be of interest to subscribers of National Geographic.  And people who'd actually go to the trouble of reading those passages would skim over them once, then forgo those to focus solely on the main story, which'd be more interesting. 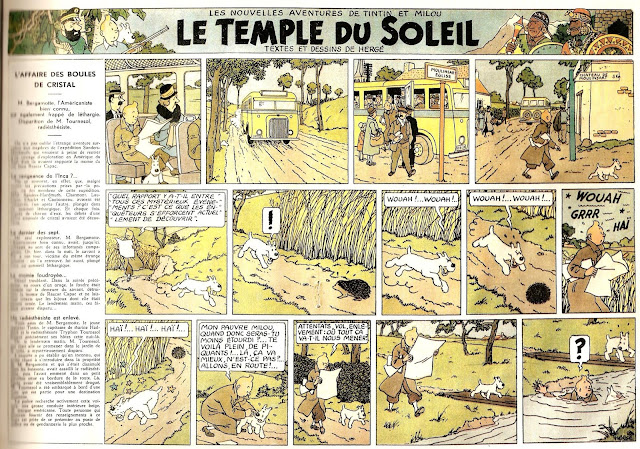 In terms of pacing and amount of slapstick mixed with adventurous comic storytelling, only Floyd Gottfredson's Mickey Mouse comes close.  I've speculated that if the Disney cartoonist had managed to reprint his stories in a more conventional and consistent format, he would be far better remembered today.  Indeed, when you look through his strips, there's a fair amount of annoying repetition that some clever editing could solve. 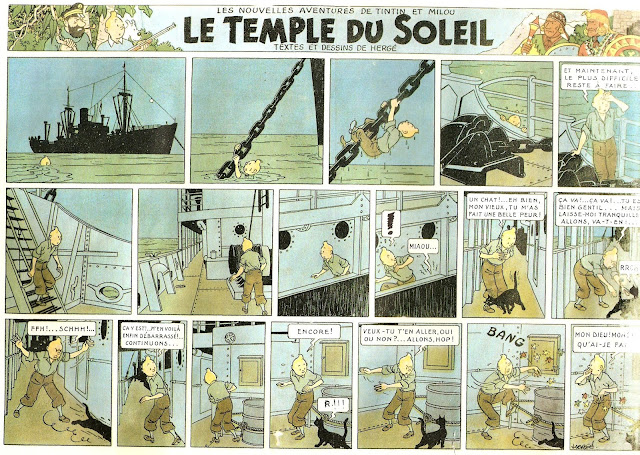 Here, we see an instance of the titular character getting annoyed by a persistent Black Cat that keeps getting attracted to him, no matter how much he tries to shoo him (her?) away. 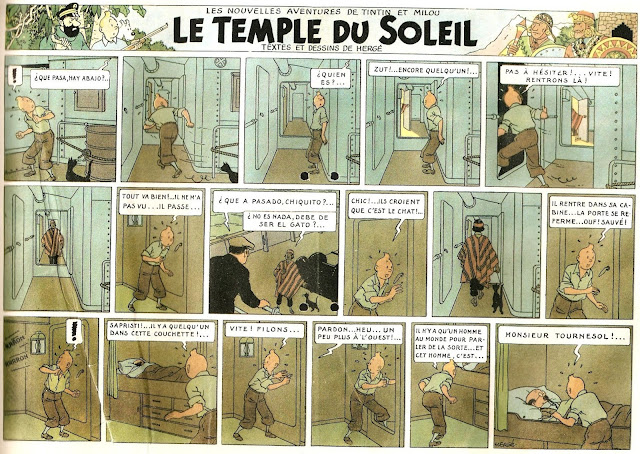 Some of the panels add a little extra something that's missing in the final presentation.  In the above instance, Tintin is already halfway out the door before he hears Calculus' voice.  The additional panel gives some breathing space that's sorely needed.  Likewise, in the page below, Tintin confronts the Incan who was once General Alcazar's partner.  Since Tintin never met the man, and only saw him from a distance, it makes more sense that he doesn't know who he is at first sight. 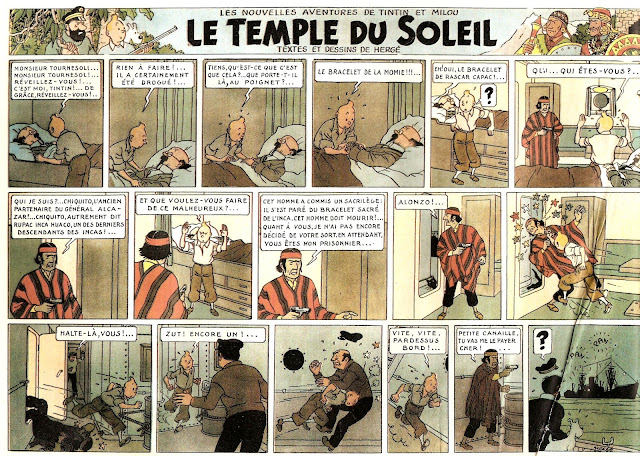 Another bonus from getting bonus panels, (some of which are slightly out of sequence from the final product), we get more amusing shenanigans from the Thompsons. 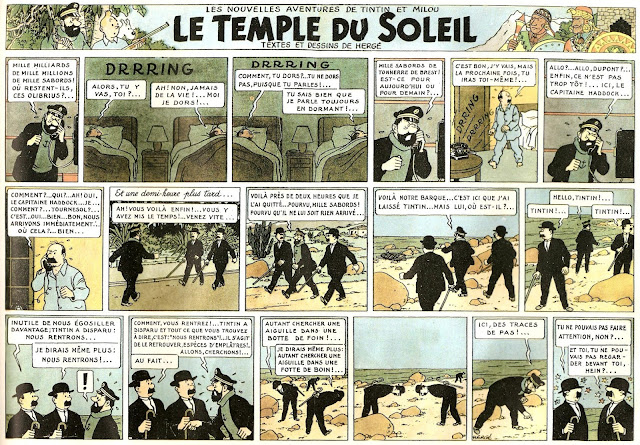 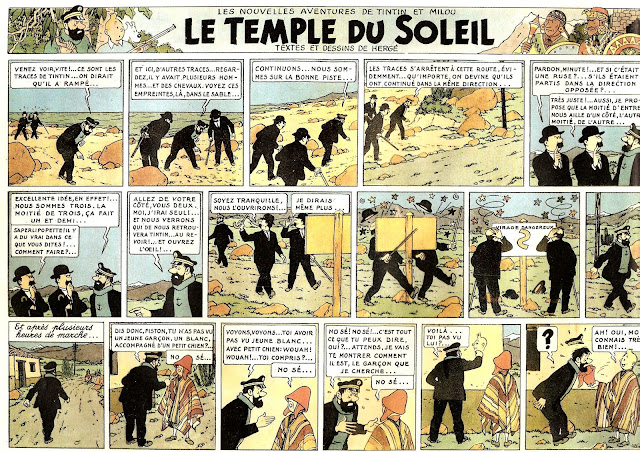 Another instance that was missing - Captain Haddock talking to a stranger in a poncho who only responds a monosyllabic "No sé..." before revealing himself to be Tintin himself.  In that context, the open mouth and grim expression makes more sense. 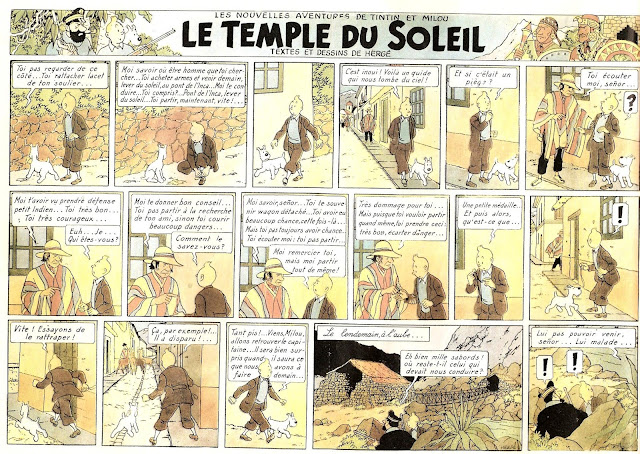 There are plenty of other instances of deletes scenes, such as encountering a skull post before entering the border to Incan lands, Captain Haddock chewing cocoa leaves to counteract poison in his system, and Captain Haddock finding Gold in the caves that he has to leave behind in order to fit through the tunnels. 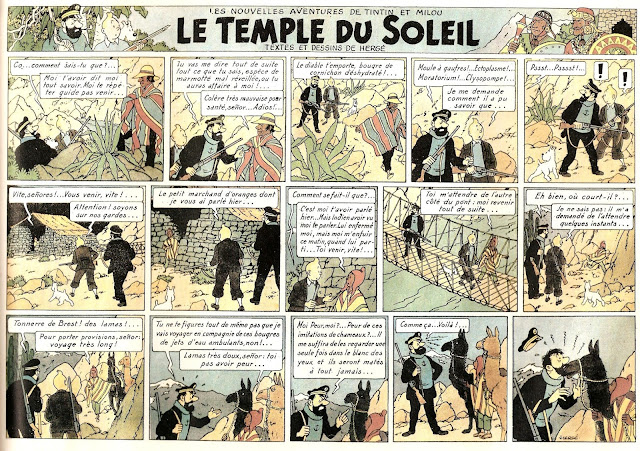 Even though the majority of the text is familiar to the source material, it'd be nice to have a more complete version.  The only instance that a serious effort was made to transcribe the Sunday Comic version was in the long-out-of-print The Making of Tintin-In the World of the Inca, which I've seen the cover of on the back of some volume previews, but never the inside.  From what little I've seen, it's mostly documentary stuff instead of actual comic pages.  The only other instance that Tintin was made more interesting was when someone wrote some stuff inside the pages, which were intentionally amusing. 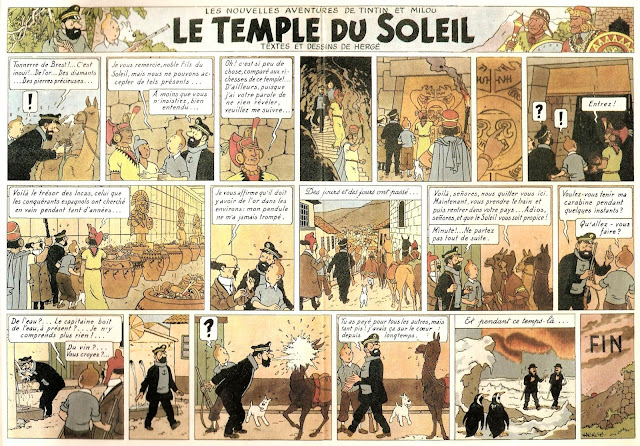 All images taken from this book: 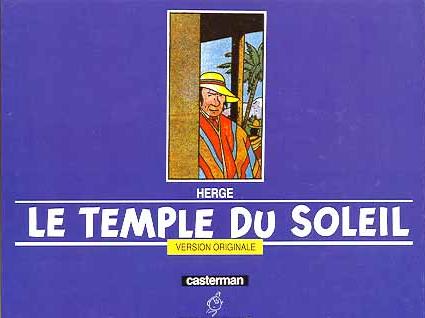