In my library, there was an old copy of Prisoners of the Sun. This was nothing unusual, since Asterix and Tintin books are practically mandatory. I think there's a law somewhere. What made this particular album noteworthy was that some unnamed kid decided to deface this copy with his own crude handwork, like so: 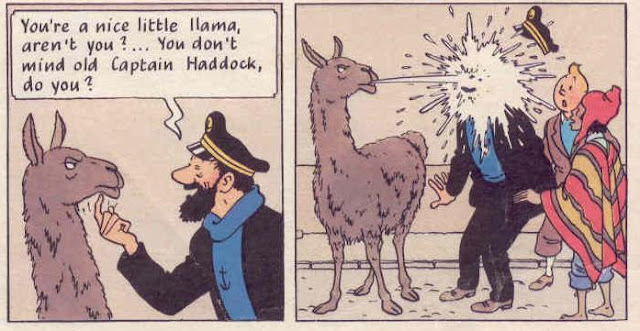 For purists out there, this kind of thing might seem offputting, but I greatly enjoyed seeing these variations of classic comic scenes. I was fortunate enough to scan copies of the relevant pages before it was sold off in a book sale. Sadly, most of the book remained doodle-free. The majority of added artwork and text didn't start until more than halfway in, when Tintin and Captain Haddock were imprisoned.

Most of these are hard to see properly unless you're paying attention, so I'll attempt to decipher the trickier ones with helpful captions at the bottom. You're welcome to click and enlarge the pictures to search them at your leisure, then check my commentary later. 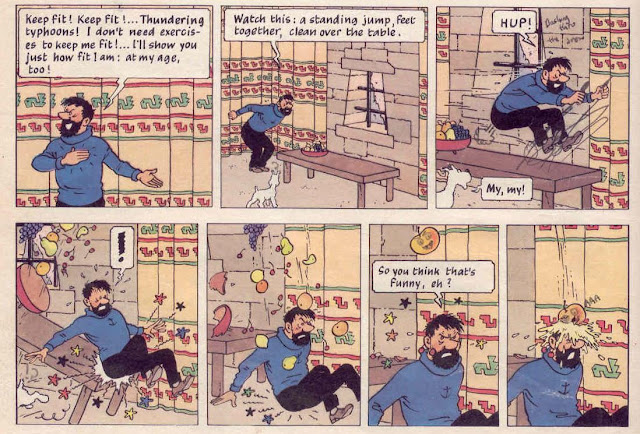 Panel 3: A bunch of skis appear as he's jumping over the table, supported by a toot from behind, while the lyrics "Dashing thru the snow" appear in the background.
Panels 6-7: An especially evil-looking apple makes its velocity down Captain Haddock's head, crying out in agony upon impact.
Minor note - Snowy has question marks appearing over his head in the 2nd and 4th panels. 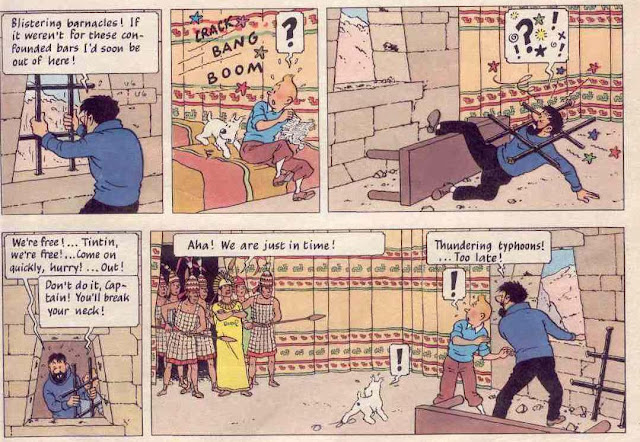 Panel 1: The Captain is grunting "Ug, ug" in trying to disprove the irresistible force paradox by simultaneously making himself both the immovable object and the irresistible force. Surely one must win out in the end.
Panel 4: The success of this experiment is not without its side effects, since he's suddenly developed buck teeth.
Panel 5: Not to mention Snowy's suddenly losing all his composture upon seeing the Aztec guards and the chief who's named "Diol" for some reason. (This is the only one I'm unsure of - It might be something else entirely) 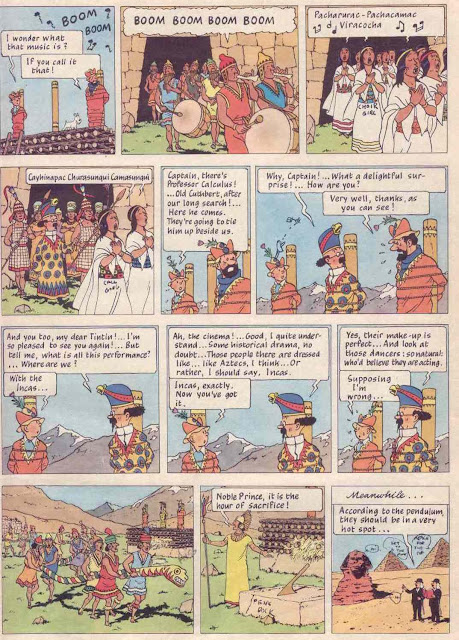 Panels 3-4: One of the singers is labeled "Choir Girl" with the note to "Call Greg" showing up later.
Panel 6: Tintin's funny hat's suddenly developed satellite abilities. No doubt so this momentous occasion can be captured worldwide.
Panel 11: The sacrificial altar is renamed "Pen's Rock".
Panel 12: The following dialogue spoken by the inanimate objects:
Sphynx: Hi. Pyramid1: Get to the point. Pyramid2: Reach for the top.
Pendulum: Hi. 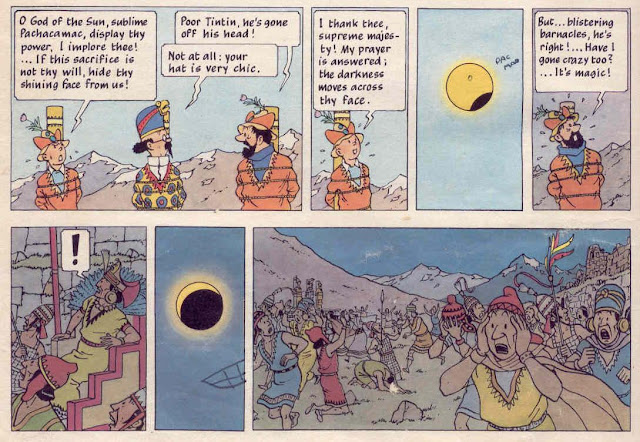 It all comes together at the climax where Tintin fools a civilization who's spent millennia devoted to the sun by claiming mastery over a solar eclipse. Apparently, an eclipse only occurs once every 1000 years. Who knew? Though if the Incas were faced against the menace of their sun resembling Pac-Man and a giant eye, they too might have reason to panic. 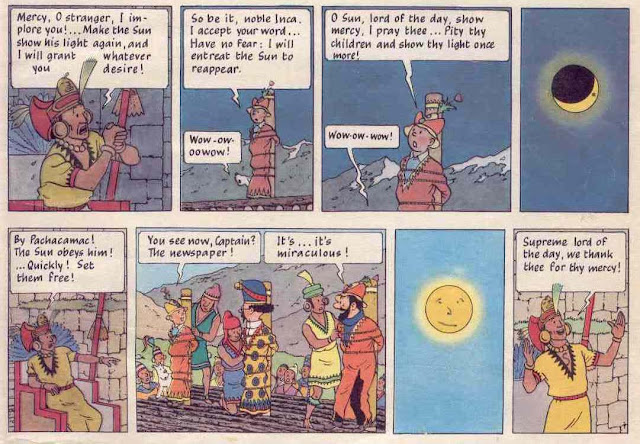 Panel 4: When the moon's eye hits you in the empty sky, that's glamour.
Panel 7: Only after the sun resumes its normal smiling face do the Incas decide it's wise to set their sacrilegious prisoners free. 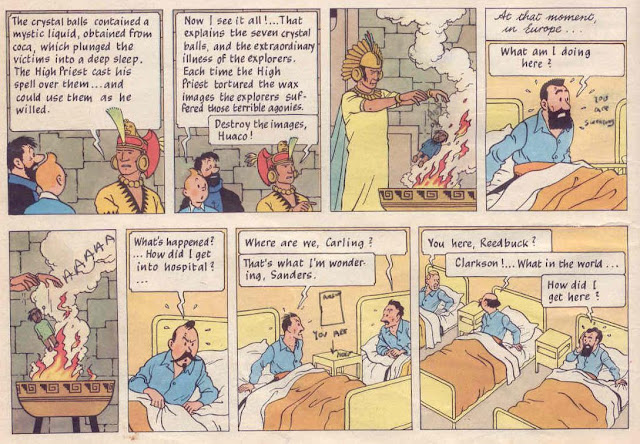 Once they do so, they agree to reveal their forbidden technique involving voodoo dolls. I especially like the effigy's reactions in panels 3 and 5.
Panel 4: You are sweating
Panel 7: [Answer] --> you are here 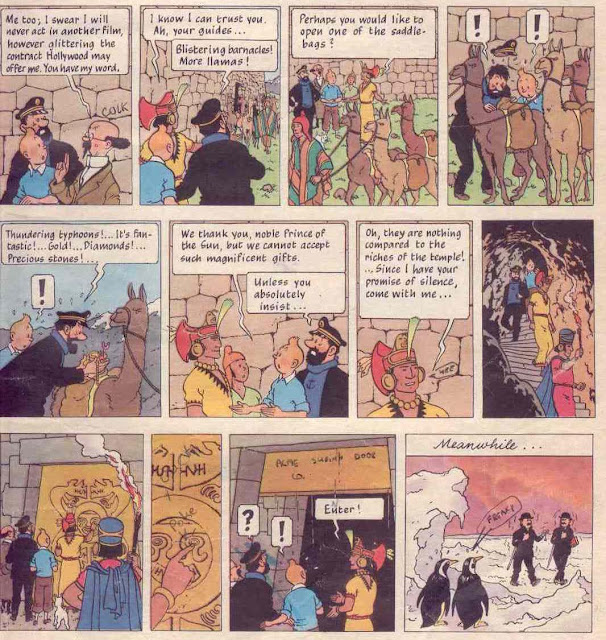 Panel 1: The urban dictionary describes colk as being "cool beyond reason". Given that Calculus was kidnapped, drugged, held prisoner for months and about to be burned to a funeral pyre for the crime of putting on an ancient bracelet, and his general reaction throughout has been generally pleasant, I'd say the description fits. At least its a better than the second interpretation, which I'll decline to transcribe.
Panel 7: The Aztek chief seems amused by the foreigner's reaction to the veiled bribery here. This leads him to guiding them to his private storage room which he's confident they'll never reveal to another soul. Since Tintin & his gang rarely traverse the same landscape twice, that's a fairly safe bet.
Panel 10: From there, he shows his sophisticated security system by "poke"ing a door in the eye which replies with a resounding "ouch".
Panel 11: This would be impressive were the door not part of the "Acme Sliding Door Co.", and the Aztec chief's reverse "N"'s been "corrected".
Panel 12: The penguins reaction to the Thompsons means they don't find them "colk" at all. 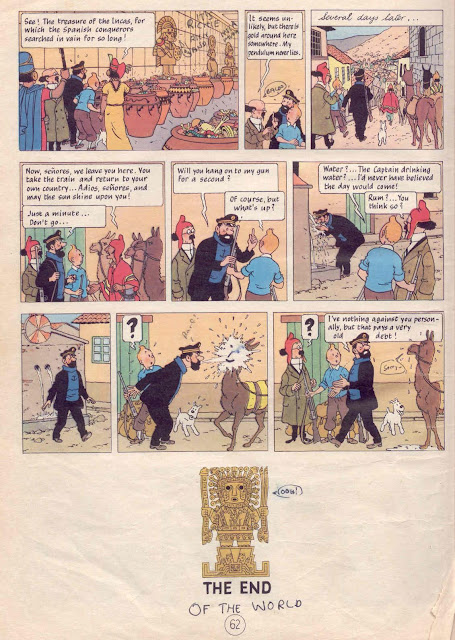 Panel 1: It's Richie Rich and Inca Man! Bum. That would actually make for a catchy theme song.
Panel 2: For some reason, Calculus says Baloo. Why he's referencing The Jungle Book at this point is anybody's guess.
Panel 8: Captain Haddock finally gets his revenge by barfing into a llama's face. Not the llama, but just a random llama, since he's been abused by llamas spitting into his face throughout the duration of the trip, and has decided to punish this one by association. After which, said llama apologizes for the sins of his brothers.

The last image needs no description, methinks.
Posted by DeBT at 6:53 PM