As disastrous as the U.S. election was (with political repercussions yet to be perceived), there’s at least some semblance of recovery, even in the face of overwhelming opposition against the status quo, the Brexit situation is just as unnerving.  Other countries are now attempting to separate out of sheer distaste of the surrounding countries they’re associated with.  It’s as if the older generation were disfranchised with the advantages Millennials got, and instead of taking to heart of all the sacrifices their ancestors made to provide for their current state of living, instead decided that the current generation is simply too soft, and needs another war in order to appreciate what they already have.  The current political situation overseas is bringing up painful memories of ages long past.  I may not be alone, as others may also be experiencing trigger warnings from current events. 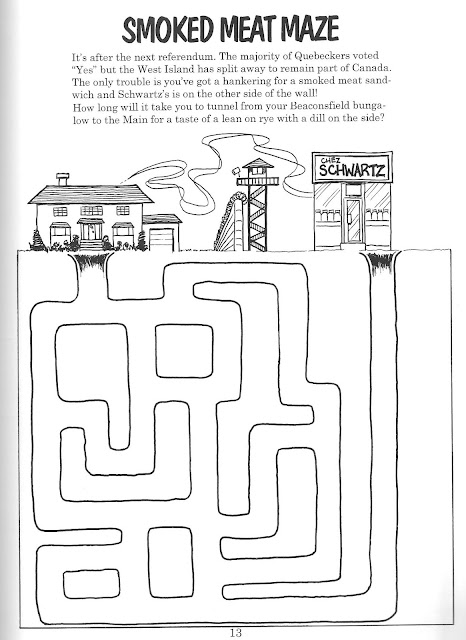 In the mid-90s, there was a humour columnist in the same vein as Dave Barry, Josh Freed, who coined the term, Referendum Neverendum to describe the constant votes in the Province of Quebec on whether to secede from Canada.  Believing that Quebec wasn’t as respected as the rest of Canada, the PQ (Parti Quebecois) Party felt that they would gain more respect as a singular country, despite not having any definite plans for future prospects,  jobs or even a replacement currency.  In the words of one of the PQ’s more popular members, Lucien Bouchard said, “Canada is not a Real Country.” 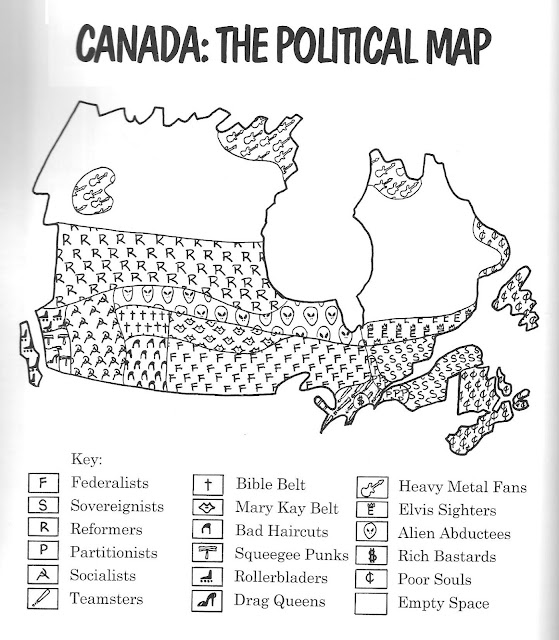 To get an understanding of the kind of political turmoil that was typical around the 1970's, refresh your memory of the October Crisis.  Outbursts of violence were rare, which made the situation even more tense, because there was so much pent-up frustration just waiting to be unleashed.  1995 was an extremely tense time in Quebec, because it was the closest the Separatists ever came to actually separating from Canada.  Originally intended to hold a Referendum in spring, plans were pushed back until they could finalize an appropriate question that would cover all possible loopholes and leave no room for negotiation.  The accepted wisdom was to wait until ‘Winning Conditions’ were favorable.  An Air Farce skit (the Canadian equivalent to Saturday Night Live) had then Separatist leader, Jacques Parizeau hem and haw over which month would be the best month to hold a Referendum election.  He tore through a calendar, rejecting various months over reasons one or another.  “February?  Too short.  March?  Too windy.  April?  Too wet.  (...)  July?  Too hot.  August?  Too close to July.  (...)  November?  Never hold a Referendum in a month with the word NO in it.  That brings us to December.  Having settled on a definite month to hold a Referendum, I have yet to decide on which year.”  While intended as a joke, the actual date for the Referendum was on October 30th 1995, over six months past the first planned date, drawing out the suspense. 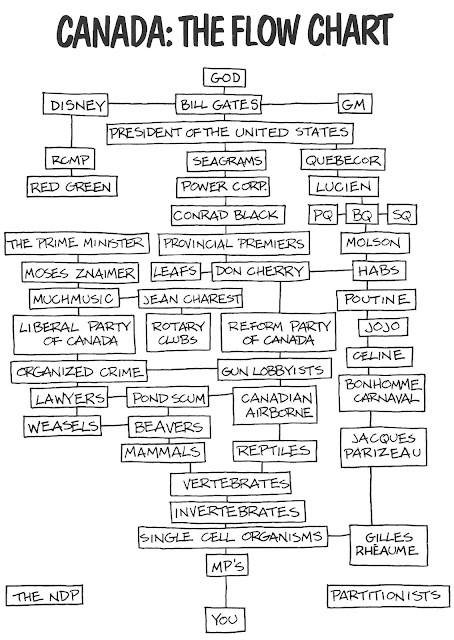 In addition to being cagey with the Referendum date, the PQ was notorious for creating an overly complicated questionnaire over whether to Separate or be part of Canada.  Just read the following and see if it makes sense:


Do you agree that Québec should become sovereign, after having made a formal offer to Canada for a new economic and political partnership, within the scope of the Bill respecting the future of Québec and of the agreement signed on 12 June 1995?

It couldn't be any simpler!  If the people could actually understand that impenetrable labyrinth of Bureaucracy Gobbledygook, stonewalling sanctions couldn't get passed, and nothing would actually get done.  This wasn't the only bag of dirty tricks employed - devoted believers made their contribution by de-voting election results in rejecting ballots for the ‘No’ side, over claims that they weren’t sufficiently “checked in” properly, according to the whims of the zealous administrators. 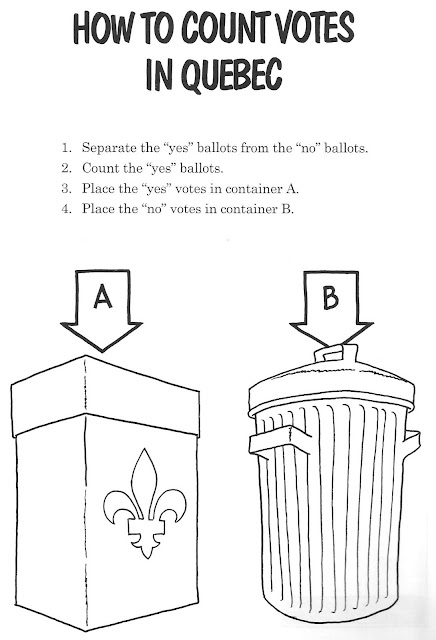 Canada was visibly unnerved at the prospect of Quebec potentially separating from them that mass numbers of them flew over via Air Canada at a mass rally to show their solidarity with this sole wacky Province.  Ontario may be considered the so-called brain, but Quebec is the Heart.  Only 15,000 people were flown over, but more curious spectators showed up to bolster their support.  If other countries had done the same, instead of heavily relying on their superior knowledge that everything would proceed as business as usual, would Brexit still have happened?
Among the conditions for allowing Quebec to separate from Canada was a consensus of an average of a 50% plus one vote.  Quebec voted with 50.58% NON to 49.42% OUI.  It cannot be overstated or emphasized enough:  the results were VERY CLOSE.  Parizeau then blamed the results on “money and the ethnic vote”, which forced his early retirement.  (Even in a Multi-Cultural society like Canada, a lot of resentment stems from being uncomfortable around the presence of immigrants)  There were suspicions that the mass migration of Canadian citizens across the Provinces cost them the Referendum.  After that, enthusiasm to separate has largely died off, and promises of separating no longer have the same appeal to younger voters than it did to the half of the population back then.  Indeed, there’s a lot of grumbling over the redundant need to separate in the first place. 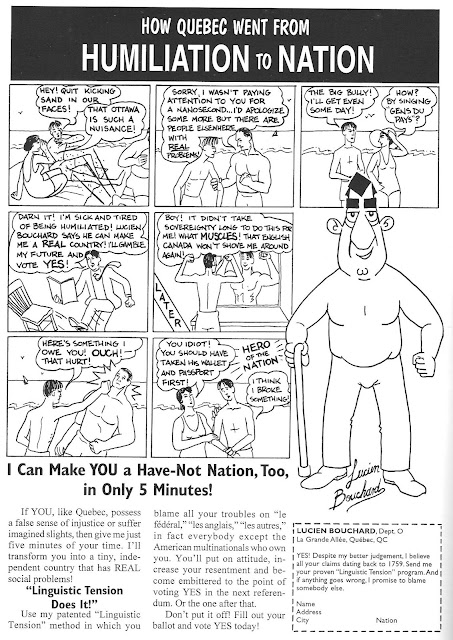 But that hasn’t stopped the Separatists from trying their damned best to try to get their points across, no matter how much it hurts their bottom line.  One of the more zealous hard-liners was Premier Bernard Landry, who was famous for his outbursts and losing his temper, and calling the Canadian Flag “A Red Rag”.  One small newspaper article at the time had a story about a laundromat that suffered some bizarre damage.  The headline read: Laundry Explodes, and at the time, I thought that Landry got so upset over something or other that he Spontaneously Combusted.

For all of Landry's bluster, the most visible face of the PQ remained Lucien Bouchard, who remained popular, despite failing to deliver on his Fairy-tale promises.  Ironically enough, for a man who was relentlessly parodied on Air Farce for making mock Nazi salutes, and his preference for Arrowroot Cookies (normally reserved for babies), his saving grace was in resigning from his party when there was negative associations with Anti-Semetic elements.  That alone elevated his status in my eyes when his previous attempts were aimed at fighting for a doomed cause.

It was our hope that after the dismal failure of the PQ and the Bloq Quebecois that there would never be another Referendum that could potentially break up Canada.  Why spoil a good thing?  Even with the influx of old-timers who long for the day when Quebec is a solely French country, the most they can muster up is a mere 36%, nowhere close to what they'd need to convince another needless election.  But the division of countries like Britain and Scotland is bring attention to this dead horse issue again, in the faint hopes that if they succeed where they failed, then maybe there's still hope.  I, for one, don't look forward to such a possibility.  I don't want these countries to fall to ruin over misplaced pride, but I also don't want my country to be broken up over something so trivial. 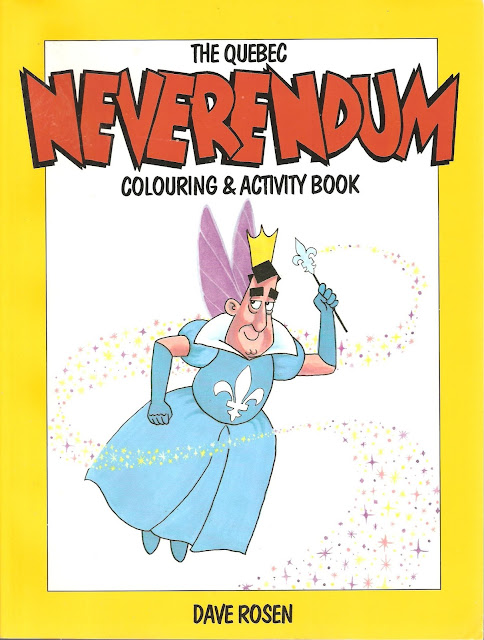