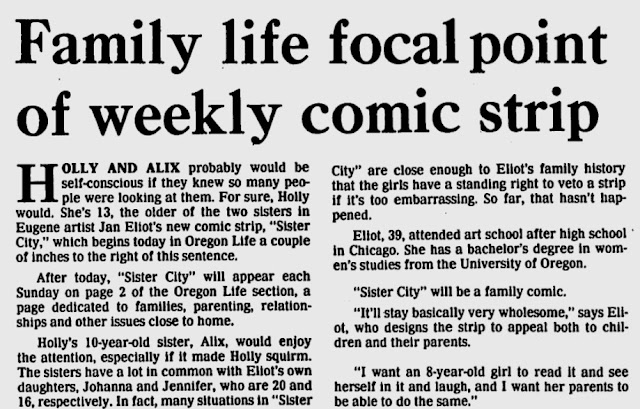 Before Jan Eliot started out with her comic strip Stone Soup, she started out by testing the waters for a potential audience with a weekly feature, Patience and Sarah that was loosely inspired by her family relations, with a smattering of For Better or For Worse behind it.  After gaining a cult following for three years, she was able to expand her repertoire to another larger newspaper, the Eugene Register-Guard under the monkier Sister City.  After five years there, it was picked up by Universal Press Syndicate and rechristened Stone Soup.  Though, by looking through the early uncollected comics, Sister City seems a better fit. 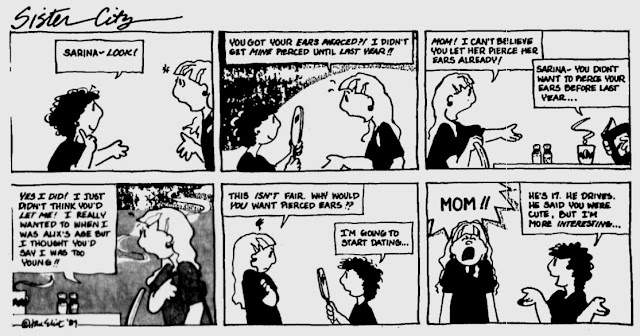 This early sample shows a first draft when Holy was originally named Sarina, and is probably the closest we'd ever get to seeing any of Elliot's early work.  For now, we'll have to be content with these samples of the first few months.

If we discount the first provided sample above, this would officially count as their first weekly comic.  Keen observers will notice a subtle difference between the lead sibling's hairstyles, and more varied body language and movement between panels.

Interestingly enough, the Mother, who would become a larger focal point in Stone Soup was more of an off-screen presence in early strips.

If there's something I have to confess, I've never actually found Stone Soup to be particularly funny.  The characters don't really speak to me, and are rather one-dimensional in their attitudes.

This comic for instance is a direct rip-off of an old Garfield comic, and expanded to the point where the humour loses its impact.

A single action (spanking and name-shaming) divided into two separate panels is the kind of thing that drives me nuts.  There are ways to combine consequentive actions effectively, and some cartoonists don't seem able to bridge that divide.  But this is still early in Jan Eliot's career, and maybe she was having an off day.

Strangely enough, the very next strip has a three-panel tier, when the majority of her comics are four-panels.

After a month of being an invisible presence, we get our first look at the Mother, whose look is pretty similar to how she'd look later.

It would take another month or so before she would appear again.

The month of September is missing from the online archives, so baring a physical copy elsewhere, there's a gaping hole in this collection.  But that's fine, since we get to move on to the second notable half of Sister City:

The presence of the Mother's sister and her baby, who's remained stunted in the same age bracket years later.

I mentioned earlier that Sister City was a better fit, and this strip shows why.  If we take the relationships between the women as a given, then obviously their tortured arguments between each other would be considered greatly identifiable for anyone who's experienced such things.  (And why it doesn't speak to me)

For the most part, Sister City mainly focuses on the younger siblings, with the occasional input from the Mother.

From these samples alone, Alix seemed to be quite popular for her outspoken and unreserved attitude towards life.

And of course, Holy, the older sister would never pass up a chance to lord over her younger immature rival.  I oftentimes found Holy's attitude grating. 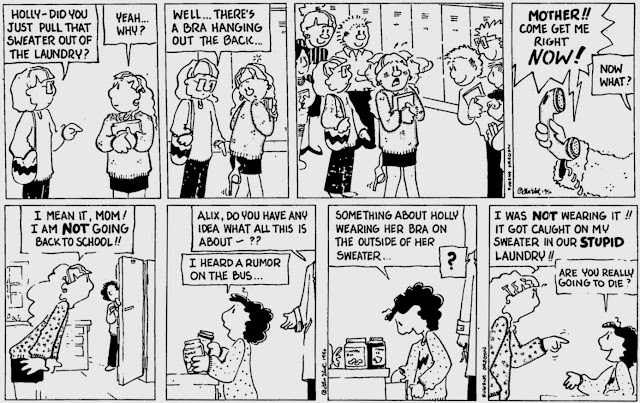 Occasionally, there would be the odd strip that would be the size of a Sunday comic.  There was no clear pattern to these, but it's likely Jan Elliot was preparing herself to try to experiment with a slightly larger format before hitting the big time.

And in conclusion, one more Sunday-esque comic showing the vast disparity between Alix and Holy.