Paul up North is easily Michel Rabagliati's most ambitious book yet.  Starting with the opening of an idlylic scene (A feat started since Paul Goes Fishing, and best employed in Paul Joins the Scouts, opening with a six-panel page of repeat moving stills of a shoe caught around a tree branch, the significance of which we don't find out until near the end) revolving around the general excitement of the Montreal Expo and the Olympics.  With the publication of Paul up North, the travails of the iconic quasi-biographical titular character Nostalgic look at Montreal (the best part being the somewhat surreal hitchhike with Paul & a friend towards a party in a snowstorm) has come to a temporary end. 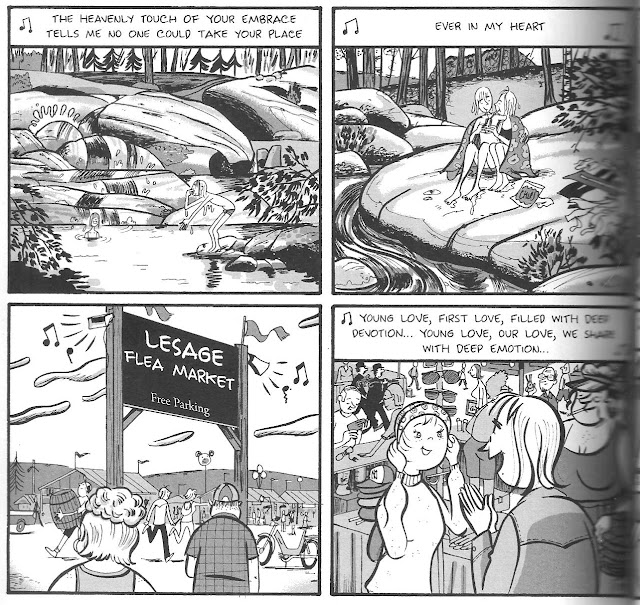 With its simplistic Lingue-Claire drawings, Paul's been referred as the Tintin of Montreal, which is somewhat fitting, since there's a Blink-and-you'll-miss-it cameo tribute.  The author/artist is a clear lover of European comics, and it shows, even in a three-panel layer outlook when the European norm is four tiers. 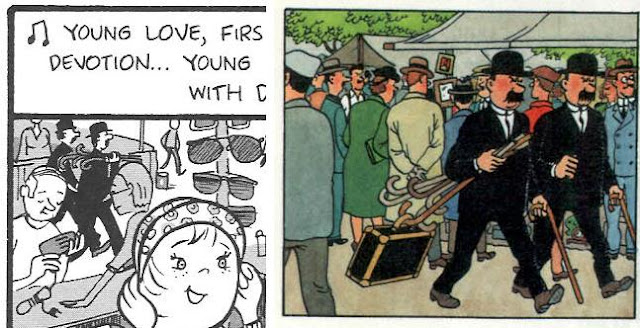 If there's a term that describes the French city, it's a rustic crumbling infrastructure, where the charm comes from flaking bricks still standing despite the years gone by.  And nowhere is that accurately displayed than in Paul's little corner of the world.  (Save for a few pages in Matz and Luc Jacamon's The Killer)

While impressive (and sometimes overly sentimental), it's also a shame, since the events surrounding Paul no longer applies to the author, since his wife left him, his mother's dead, his father's sick, and his dog's gone to the farm.  As a result, it's become somewhat harder for the self author.artist to draw recollections from his life when current personal conditions are no longer as rosy.  And when Lynn Johnson increasingly drew from her preconceived notions of what her life should be, rather than what it actually was, her life-long definitive work suffered as a result.  All of Paul's stories have a aura of heartbreak around its center, but a book filled with nothing but pathos would be difficult to swallow.

There was also an adaption of the book Paul in Québec (which was renamed Song of Roland for some reason)  The Live-Action movie was called Paul on Québec, because consistency be damned.  It was notable for having a brief scene that looked at the printing process of a volume of Red Ketchup Vs. Frankenstein, showing an interior page, flipping the inked flapout on top of the coloured board underneath.  Despite its impressiveness, that particular volume doesn't actually exist.  It was just an excuse to have the Real artist Réal Godbout show up and be posterized for eternity before it was too late, since his adaption of Kafka's Amerika would've gone into obscurity.  (I've been meaning to get back to Red Ketchup, but my usual translator hasn't gotten back to me for years) 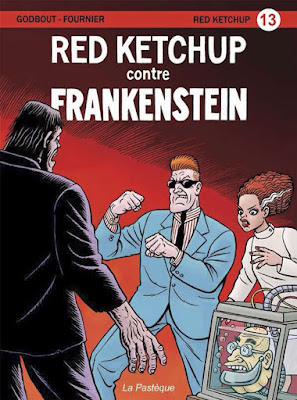 Prior to this, the earliest adventures of Paul was composed of mini-stories, such as Paul Apprentice Typographer and Paul in the Metro, first seen in Drawn & Quarterly Vol. 3 & 4, and later reprinted in the Free Comic Book Day sample from 2005.  While these short stories were collected in a French volume of their own, they haven't been compiled in a collection in English, as per my request.  Personally, I'd prefer that they be bundled up with Paul in the Country, the shortest of the Paul books.  But that's not the only missing gem - there are others. 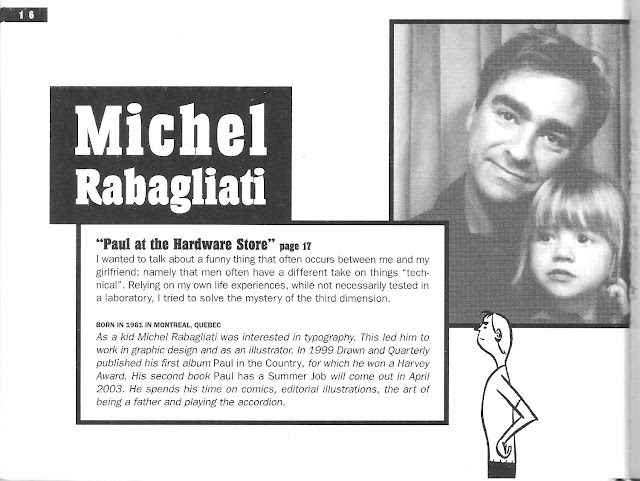 Now, this next bit will require some explaining.  There was a book that had re-drawings of various cartoonist pages.  On one side was the original page, sometimes with the penciled draft left intact.  On the other side was the modern-day artist's interpretation.  Several were in English, but the majority of the book was in French.  This excerpt from a typical Gaston Lagaffe page shows the eternal BoyChild engaging in various disruptive pastime activities far beyond the social norms of an office building.  (Even if said building is the publisher of Spirou Magazine) 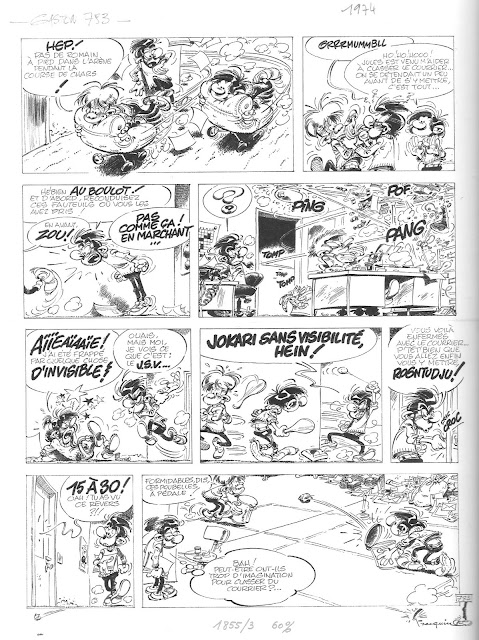 And here's Paul's version of events: 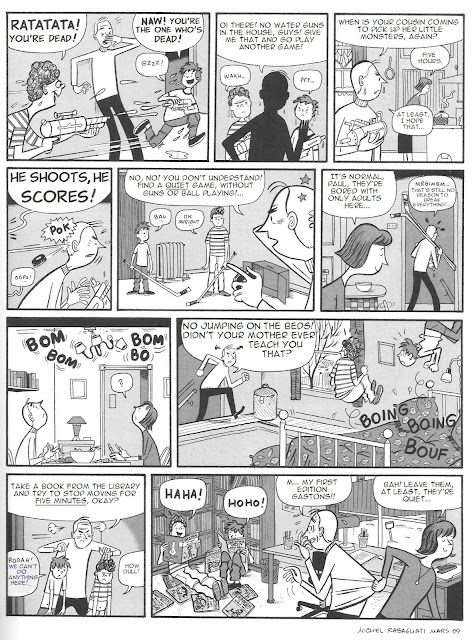 Another short one-pager was when Paul was used as an opportunity to showcase the Visual Arts in a French newspaper, Le Devoir.  Here, he takes a very out-of-character moment to showcase the bombastic style of a pushy newspaperman that's more along the likes of Achille Talon, down to his rapid speech and verbal tics. 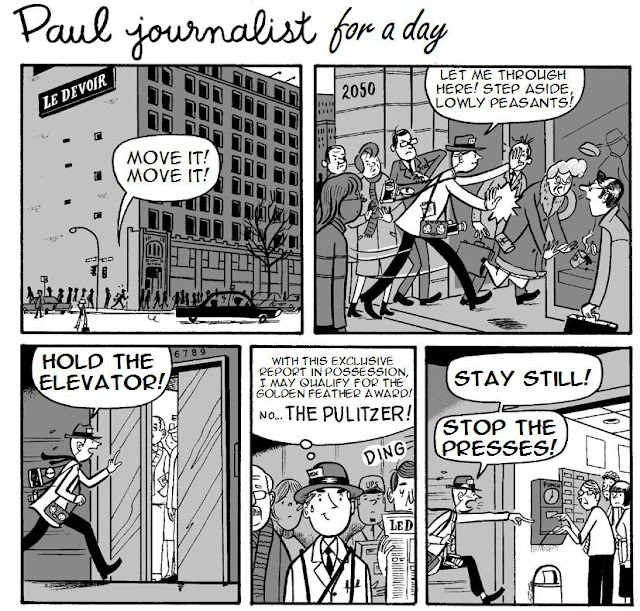 For the record, there actually IS a Golden Feather Award.  In the first panel below, Paul originally said "On tue la une! on bute la deux! on trucide la trois!"  I rephrased it as best as I could, including the penultimate panel. 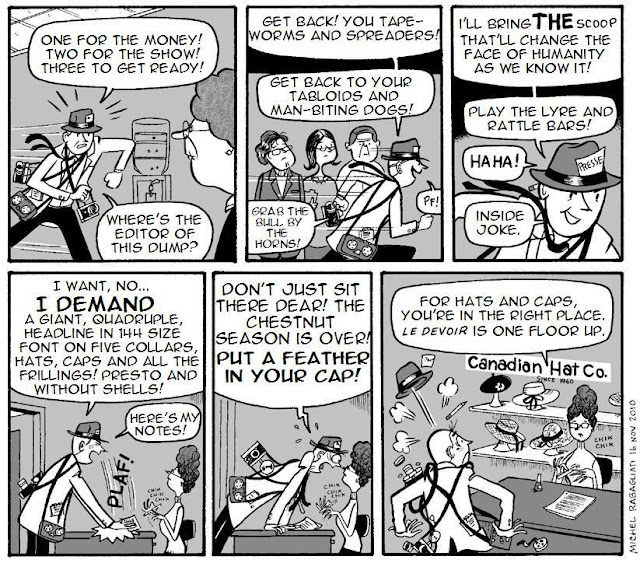 But the major find was Paul Goes to the Hardware Store, coming from Cyclops, an anthology of Canadian artists.  As I mentioned before, my Father is somewhat of a finicky handyman, so the following pages quite ticked his funnybone.  More after the cut. 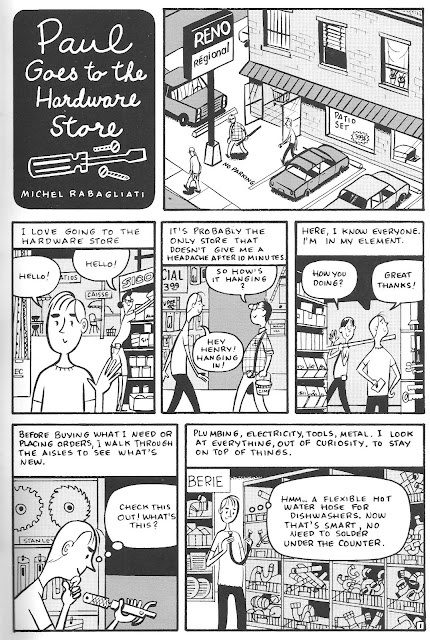 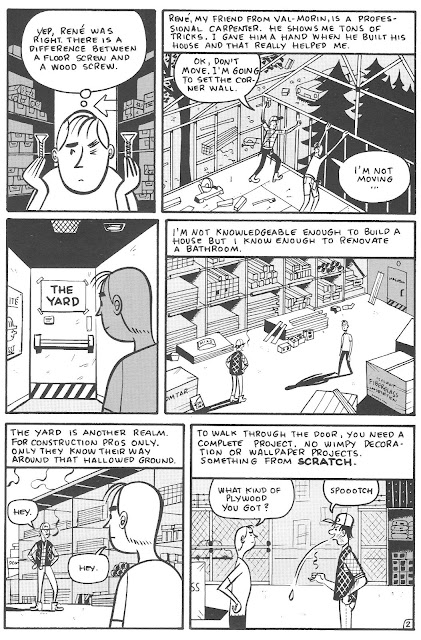 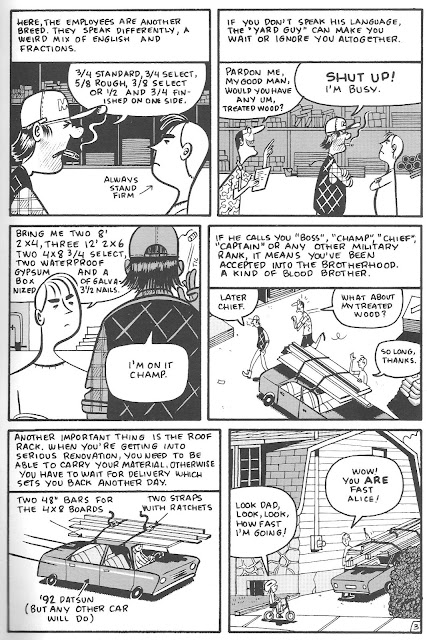 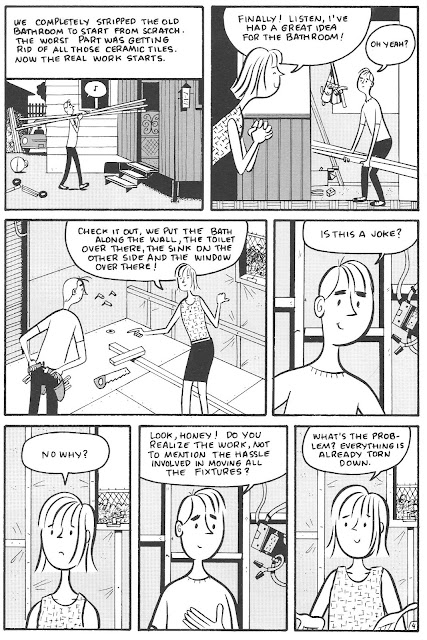 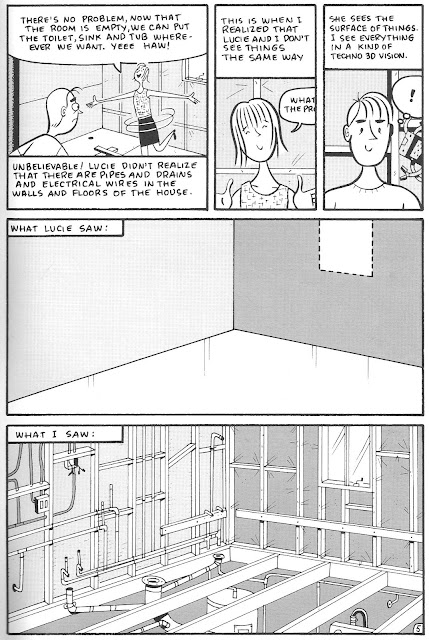 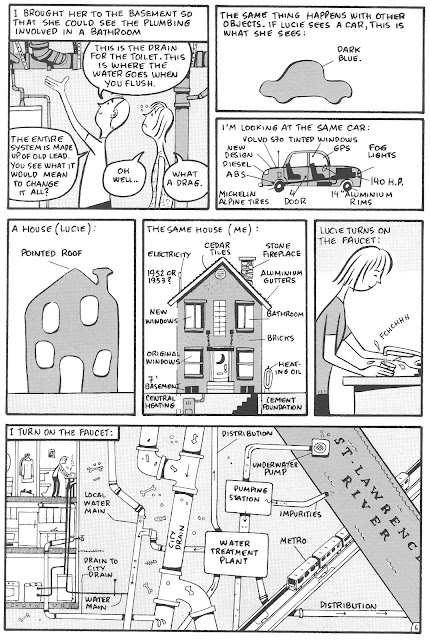 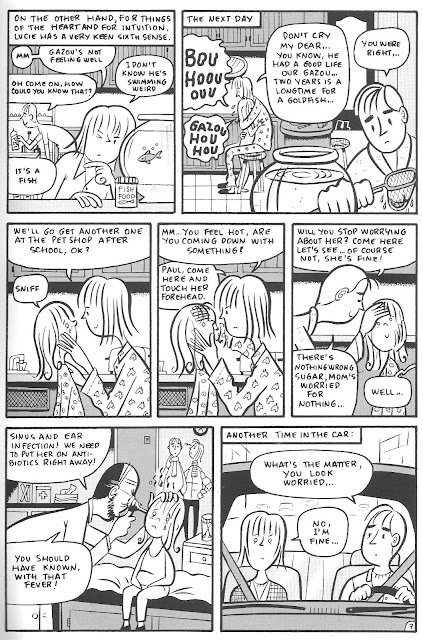 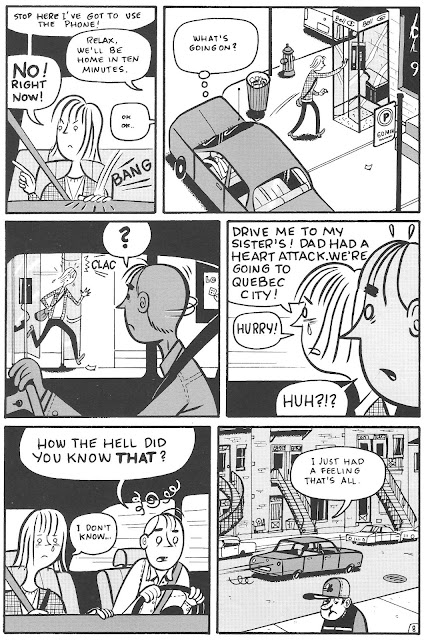 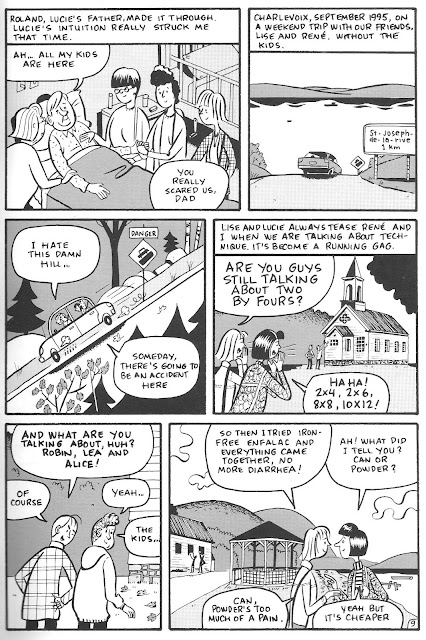 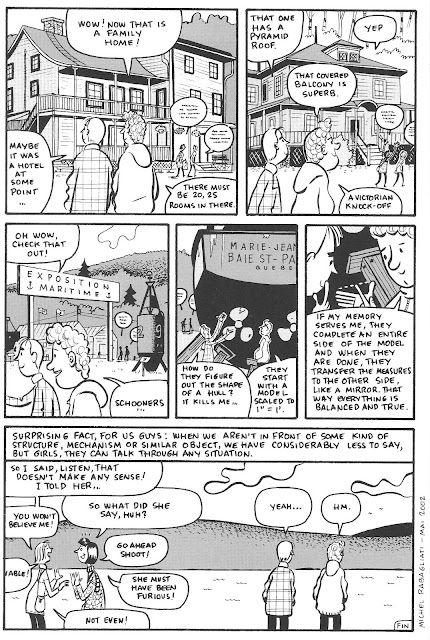