When you think of serial comics on the Funny Pages, you're more likely to think of the serious drama archetypes, such as Prince Valiant & Mary Worth.  Some papers would go the extra distance and splurge for the Superhero dramas, such as Superman, Spider-Man and The Incredible Hulk to name a few.  All of these strips unveiled their stories at a glacial pace, and oftentimes, it was only by stockpiling them up and reading them in large batches that you'd get any satisfactory pleasure.  (Unless you're a masochistic fan who wants to see what'll happen next, no matter how mundane it is)  Strangely enough, this formula was never really applied to cartoonier comics, which would've been a boon for repeat readers. 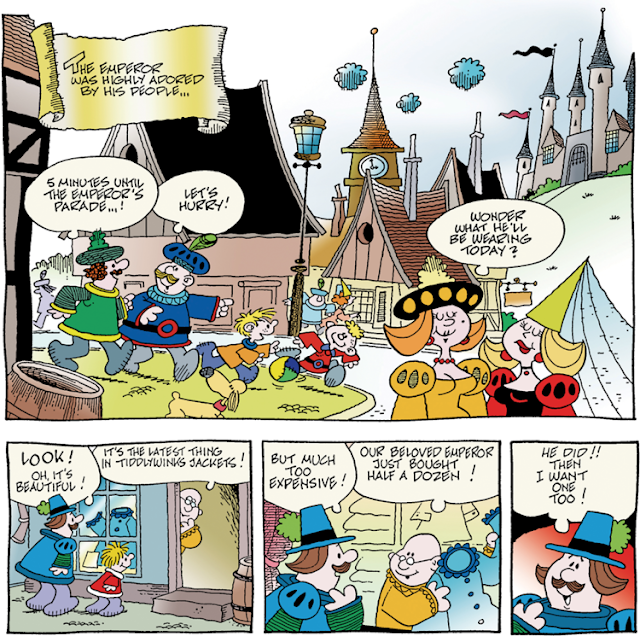 One happy exception would be The Tales of Hans Christen Anderson by Werner Wejp-olsen. Werner Wejp-olsen is a prolific Danish cartoonist, having worked on multiple strips over the years.  As iconic and memorable his artstyle is, the biggest obstacle to acceptance may be his name, which isn't exactly a household name.  (Unless you happen to live in Denmark) 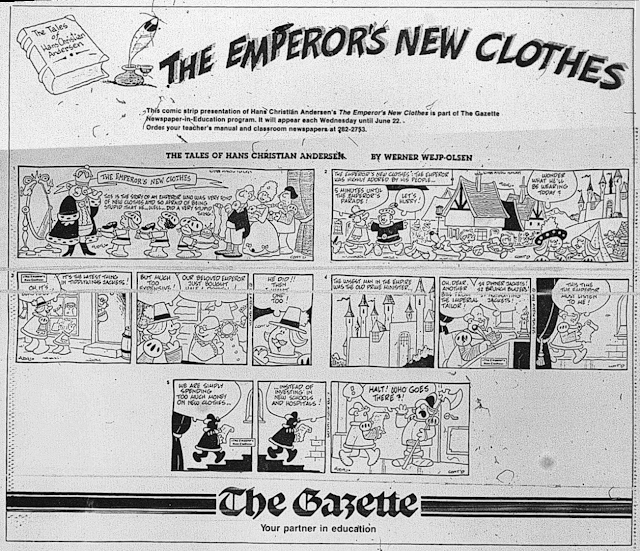 Since the nature of serial comics is painstakingly slow, The Gazette took the preferred option of having multiple comics released in one full batch as part of an "Educational" program.  This was around 1988, when interest in comics started to increase, around the time Calvin & Hobbes started to pick up steam, and just before Bloom County was about to expire. 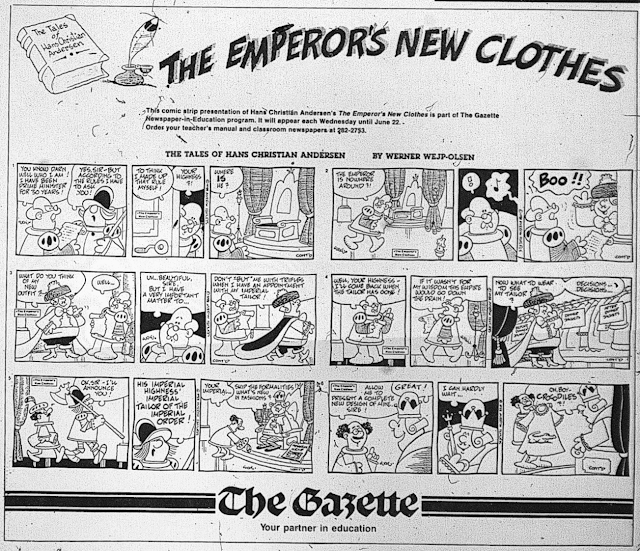 This experiment ran on Wednesdays, and lasted from April 13th to June 22, and was only repeated again later with Werner's adaption of The Tin Soldier (which I still prefer over the toned-down Disneyfied Fantasia 2000 version) 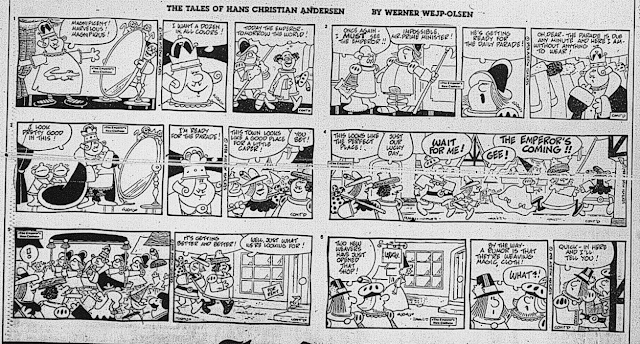 Technically, these stories are already available in colour, but their scarcity is only mitigated by the public's perception of them.  Consider these comics as a low-res version of how they appeared in the papers.  None of the Sunday comics showed up as part of the package, necessitating some recaps on Mondays.  At this point, The Emperor's New Clothes is Public Domain, and familiar enough to warrant repetition. 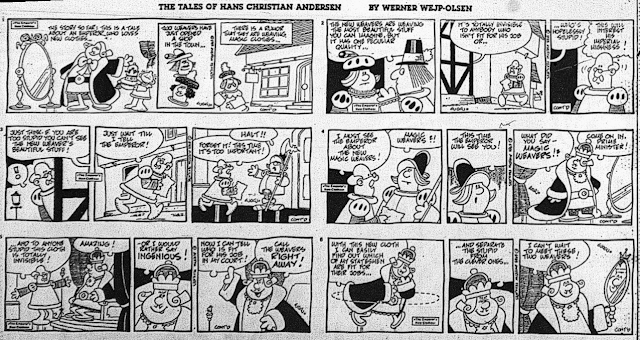 One thing I particularly liked about these comics was the use of Werner Wejp-olsen's signature in the margins of every strip.  Since his name was such a mouthful, it was shortened down to WoW.  Because I didn't know that was his nom de plume, I thought that the comic itself was commenting on how impressed it was on what was going on:
"Forget it!  This time it's too important!" WoW.
"What did you say - Magic Weavers!?" WoW.
"I can't wait to meet these two weavers!" WoW. 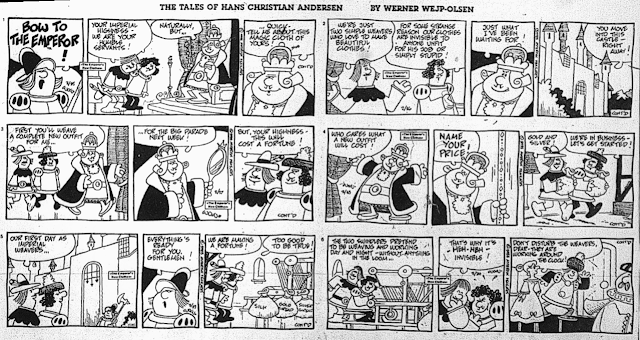 Anyways, the reason for showing these comics is blindingly obvious, since there's never been a more relevant time to show this story than ever before. 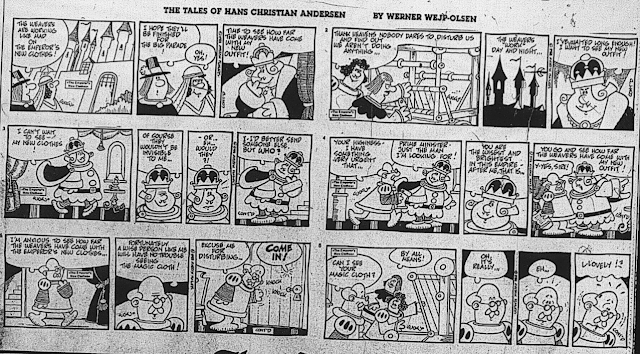 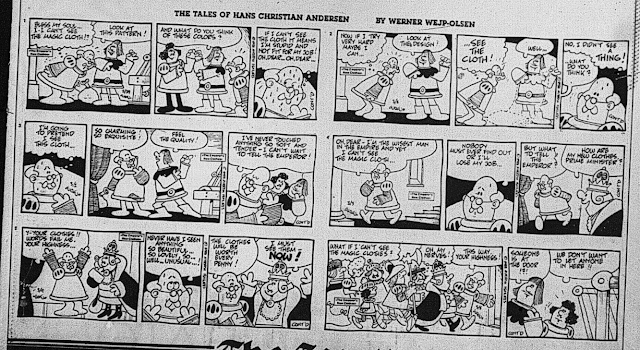 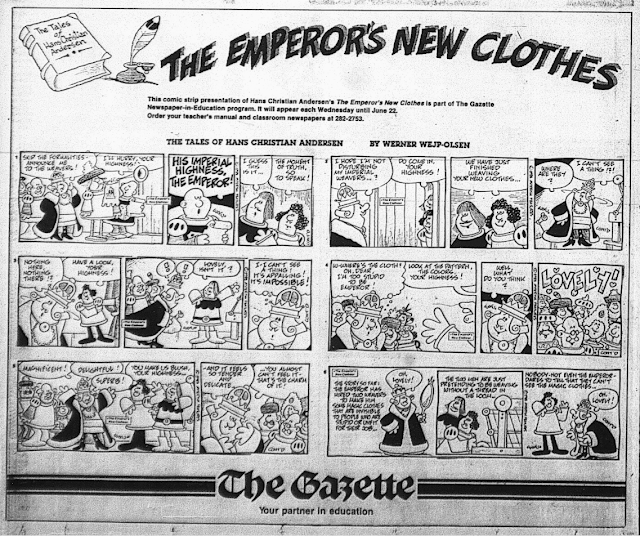 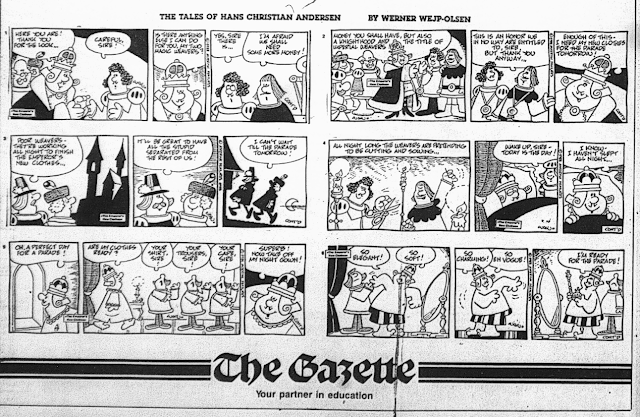 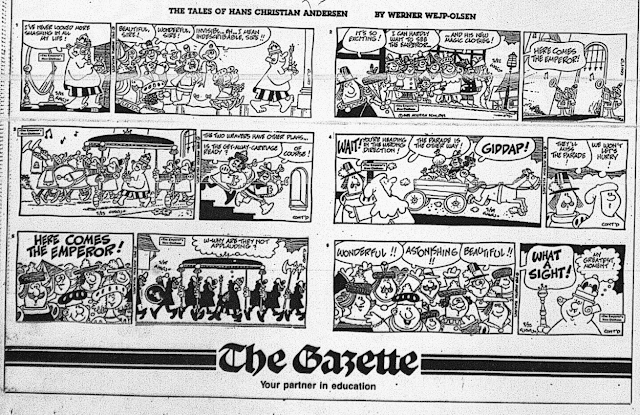 It's probably worth mentioning that someone compared Trump to Prince John from Disney's Robin Hood, a vain status-seeker who's obsessed with gold, and filling in shoes that are beyond his physical capability to fill.  Also, the Disney Book Club adaption of The Emperor's New Clothes had Prince John in the title role, with the two scam artists Cat and Fox from Pinocchio, the two most identifiable Karma Houdinis in literature. 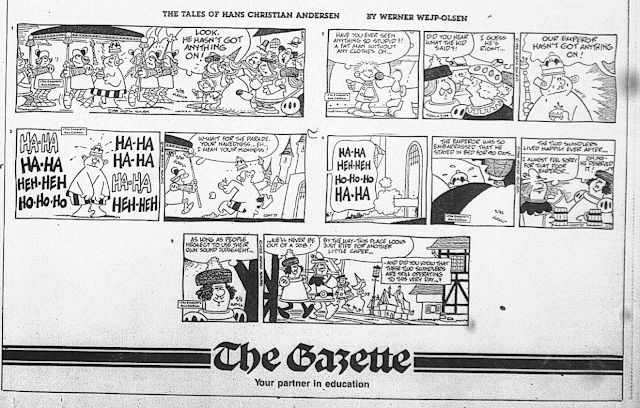