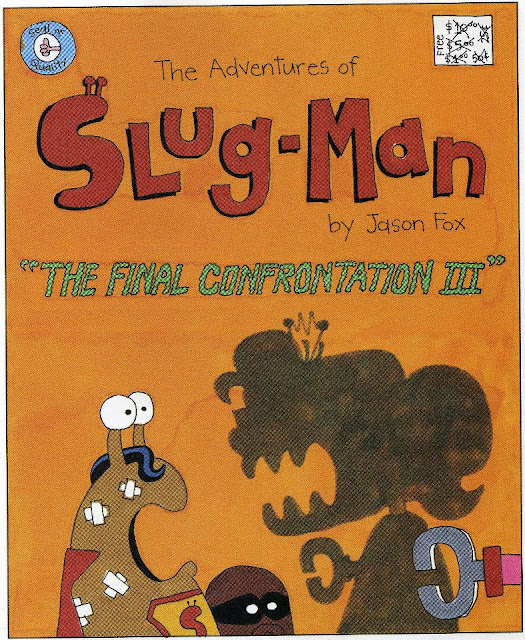 Apparently, the market for inside jokes regarding various Sunday Comics filtered throughout children's drawings was an extremely limited market, appealing only to me, considering how few links it gained.  Since my last entry regarding childish drawings wound up being so unpopular, I decided to change tacks, and showcase something similar that I figured would garner larger interest. 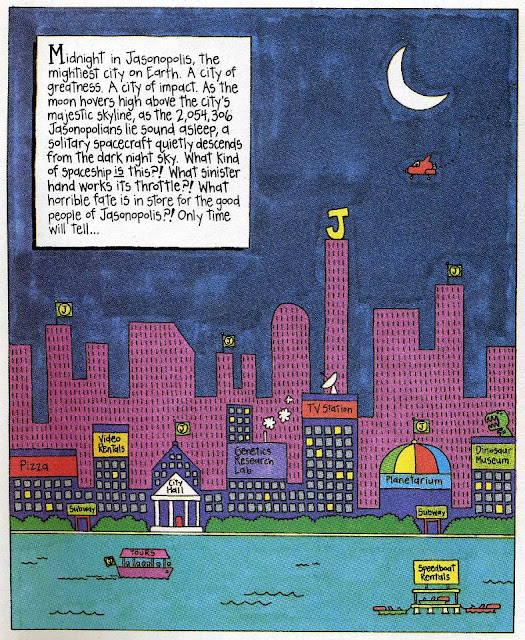 The second Fox Trot Anthology collection, En Masse, had a secondary comic along the likes of the larger Calvin & Hobbes collections - a Slug-Man comic drawn through the vein of Jason Fox's warped vision. 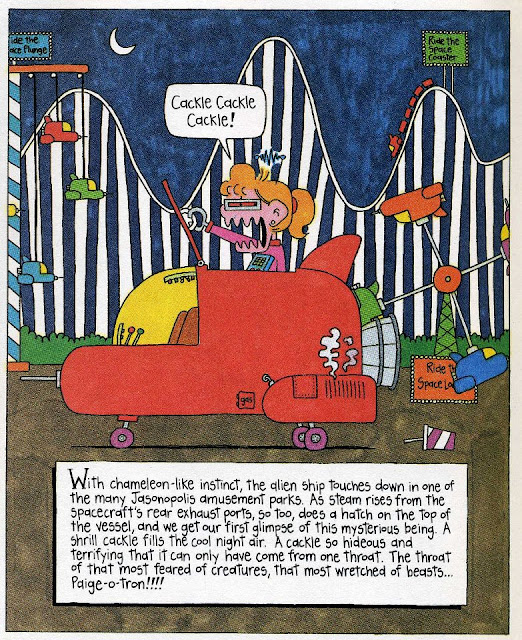 Apart from the coloured Sunday comics, this was the only new material to make up the bulk of the collection.  And I was reluctant to purchase a book containing material I already had just to gain a few pages of a short story that I wasn't really that invested in in the first place.  Not to mention I was hoping that it'd be reprinted in another anthology elsewhere further down the line. 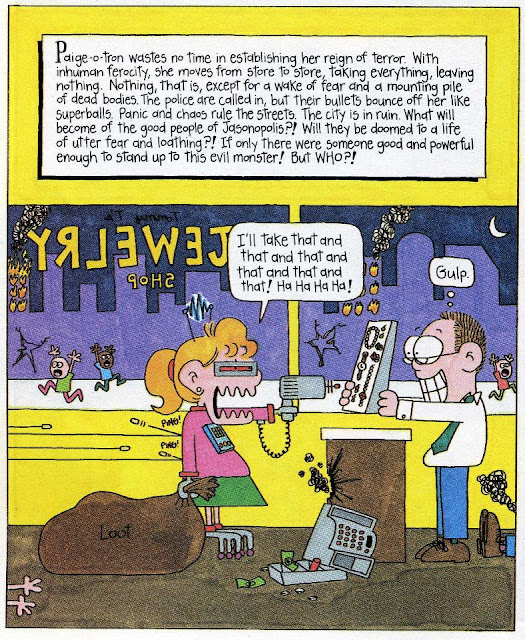 Fortunately, a Facebook user had the whole thing available (and still is), on her page, and I was able to bypass my hurdle of paying for something I was reluctant to shell out for in the first place.  So far, these pages haven't been reprinted anywhere else, and none of the later Fox Trot collections had any bonus material, save for a look into the cartoonist's creative process of creating a typical Fox Trot strip. 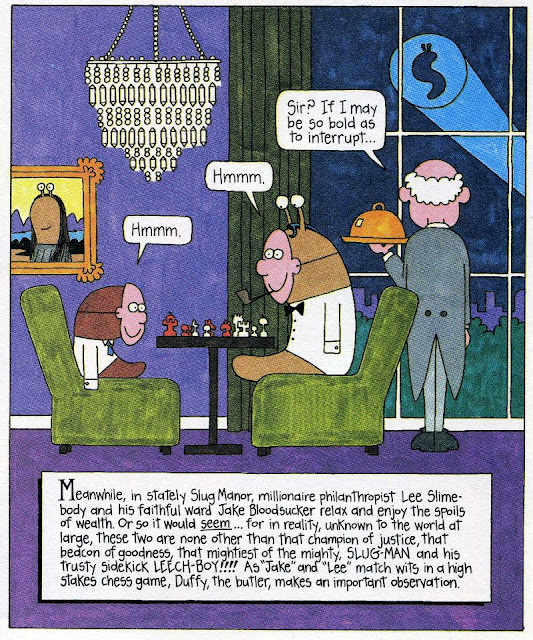 One good reason might be that this kind of material could easily be classified as an Old Shame. 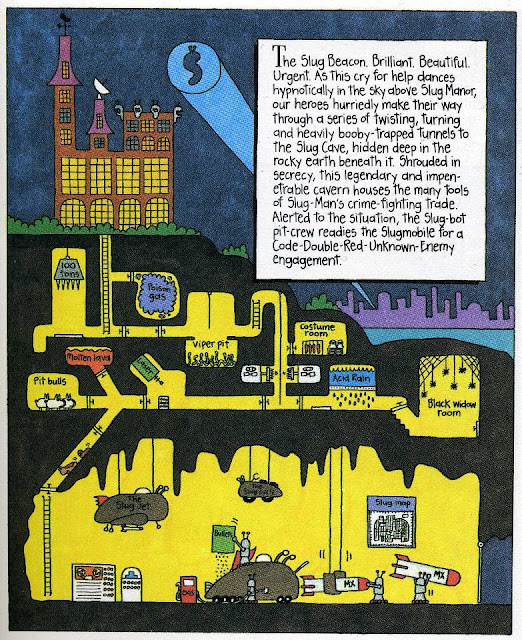 Much of the appeal of Slug-Man comics was hearing Jason's attempts at trying to mimic the over-the-top aspects of a typical Superhero comic with all the Adam West Batman Show cliches present.  Paige-o-Tron is a nakedly disguised representation of Jason's animosity towards his sister, which isn't that far removed from other comic creators venting their frustration towards real-life figures on the funny pages. 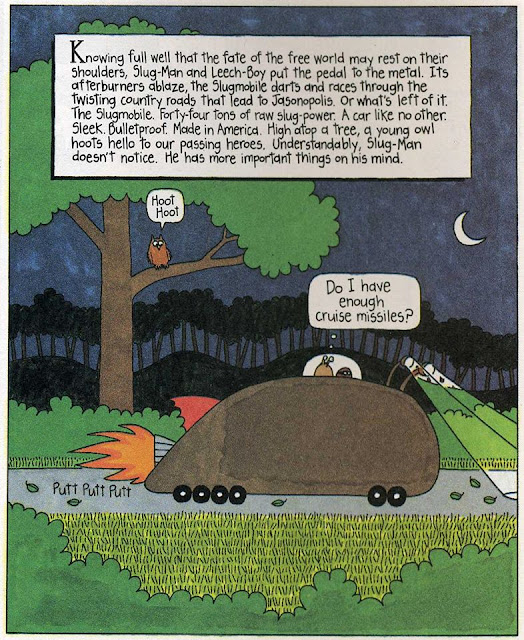 But much of that enjoyment is significantly lessened when seeing an actual full-length Slug-Man comic with none of the stylistic beats of a Sunday strip.  Perhaps a project like this would've required quality control to look closer to an amateur's attempt, or reduce the flowery purple narrative boxes that cover up the majority of the artwork, leaving hardly any room for (un)natural dialogue.  Or maybe my standards are just too high. 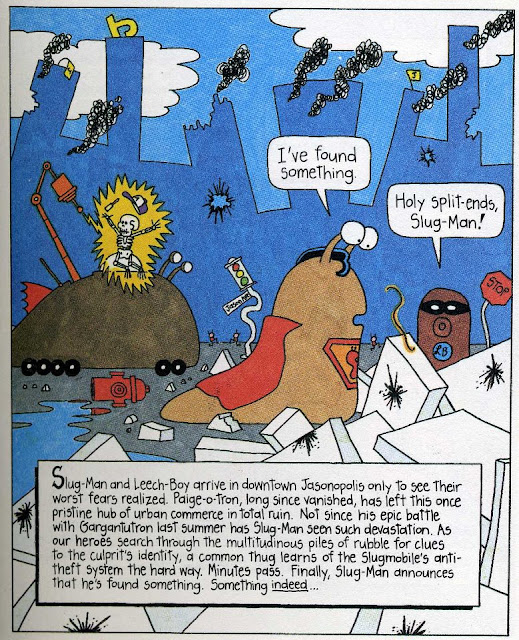 Something that's been recently pointed out is that there's a large influx of movies that get by, by being purely average.  They don't aspire to reveal any inner humane truths - they just go through the motions, rehashing reheated dialogue and scenes from other movies.  They're neither Sleeper Hits or Must-Sees, or So bad it's Good, but more along the lines of So Okay it's Average.  And that's where these Slug-Man comics lie. 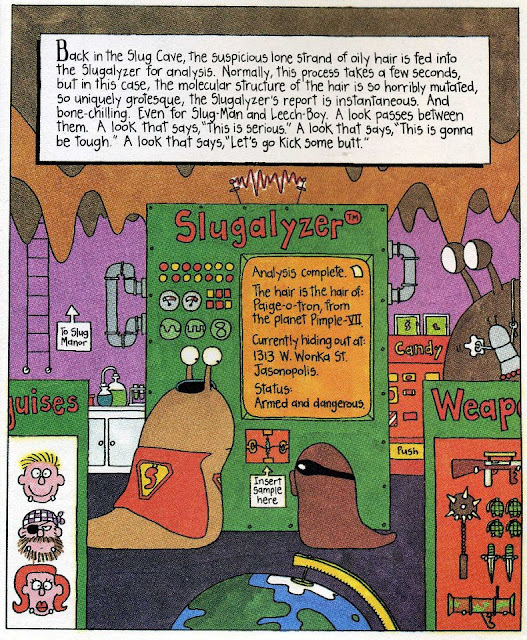 It took me awhile to work around just why I was so reluctant to splurge the hard-earned cash over for
that I had no real vested emotional interest in.  (Even though it'd fill in a hole in my collection)  Having mostly flipped through the pages in a hurry in order to absorb the contents, I didn't have much time to think through the main reason.  And then I hit upon it - apart from the Superhero beats (which I've never really warmed up to), the majority of the Slug-Man comic simply isn't that particularly clever or funny. 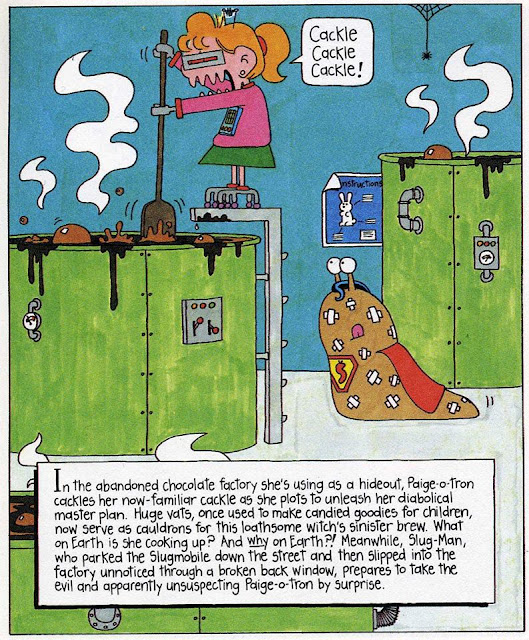 It's not so much that the comic plays the Superhero cliches straight - it doesn't do so in a manner that's any different from what's been done hundreds of thousands of times already.  This isn't a satire on a tired genre - it's an outsider's perspective of the medium, filtered through a child, as penned by an adult man.  With all these elements, you'd expect there to be some kind of commentary that would be accessible to all audiences.  But apart from some light touches here and there, it plays the whole thing totally straight. 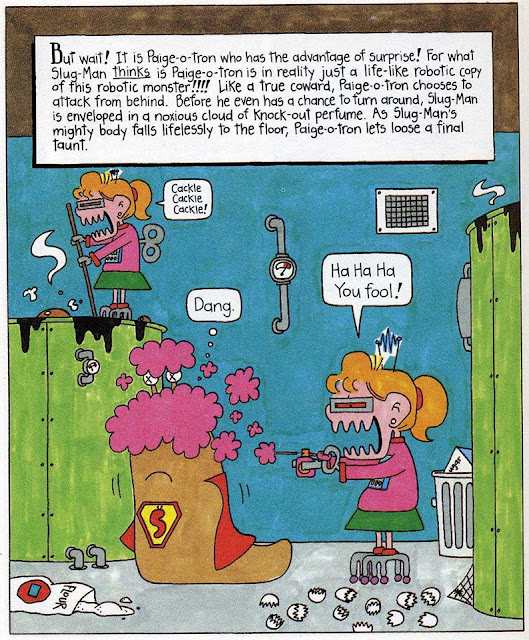 If you look at the upper right corner of the Slug-Man cover, you'll see that the price has been constantly slashed down to the point where it's practically given away for free.  If Jason couldn't give these comics away, then what possible value could be foisted on these pages, which aren't even consistent from panel to panel?  "Seal of Quality", indeed.  And I use "Quality" in ironic quotation marks. 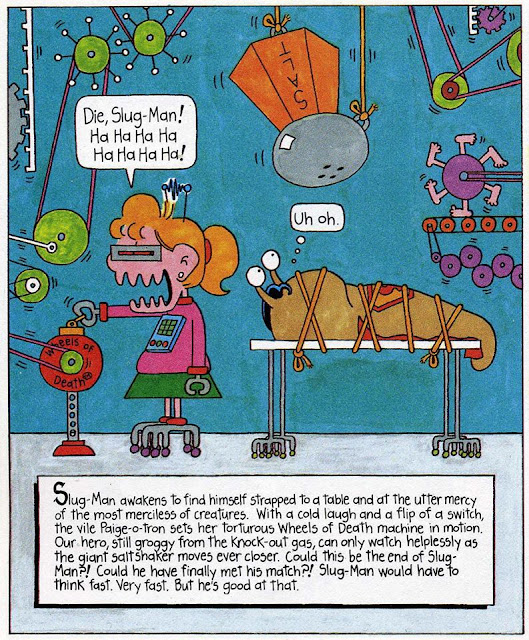 One thing that always annoyed me about abundant narrative boxes was how much they detracted from enjoying the comic, revealing useless details about how you're supposed to feel about a character or events playing out in front of you.  Much of the work stemming from writers who believed the power of their work was only emphasized by the amount of verbose baggage they cram their hacked stories together, and not trusting the artist to convey their vision across.  Which oftentimes results in such clumsy sentences such as, "He jumped fifty feet high!" "He punched him all the way across the room!" "He's drinking his tea now!"  And the pertinent facts that are relevant are buried in the huge paragraphs they've laboured on, to make sure that every single line is read. 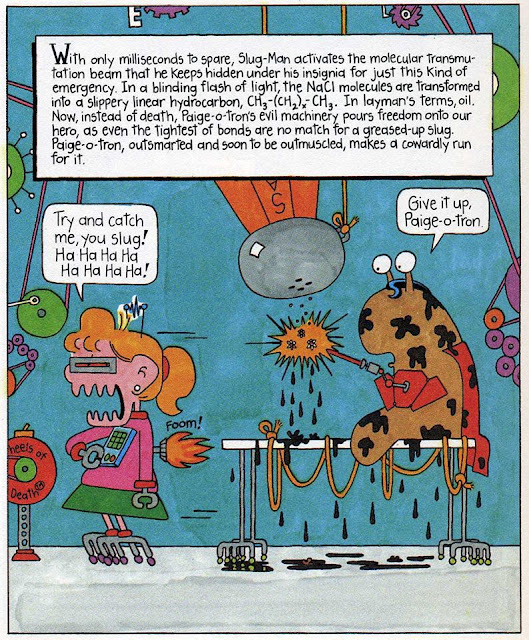 You could ignore the majority of the narrative boxes, and just focus on the main action (like I did), and you'd still wind up with greater comprehension of what happened.  Comic fans nowadays may complain of "decompression" where a story that normally took place in the span of a single monthly comic issue was instead stretched out over the span of six months.  But those are bad usage of writers not understanding how to properly use decompression, and Comic fans mistaking the large amount of overwritten narrative boxes for content. 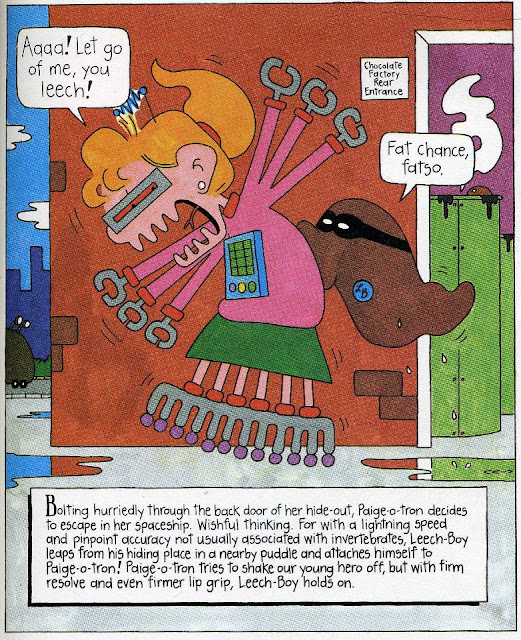 It may not seem apparent, but only the cover and last page are full-sized comic pages.  The regular content of the Slug-Man comic was displayed on a four-panel comic grid that were chopped up for easier readability.  The "quality" of the comic otherwise, I'd argue that it's easier to read this way.  The narrative box keeps switching from top to bottom, forcing the reader to focus their eyes across the page, depending on where they're likely to look next. 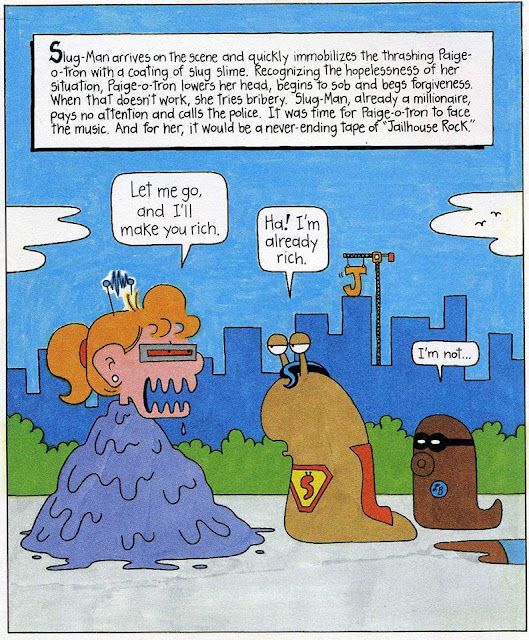 If there's a tentative sameness to S-hero stories, it's because much like the authorities, the heroes don't actively go out of their way to stop disasters before they happen.  They only step up once the factors start to personally impede onto their lives.  Oftentimes, jailing up or having the criminal masterminds run away to fight another day thanks to a contrived distraction that just happened to pop up in the nick of time helps as a useful narrative crutch for popular reoccurring villains.  But it can become annoyingly obvious when overused to the point of absurdity. 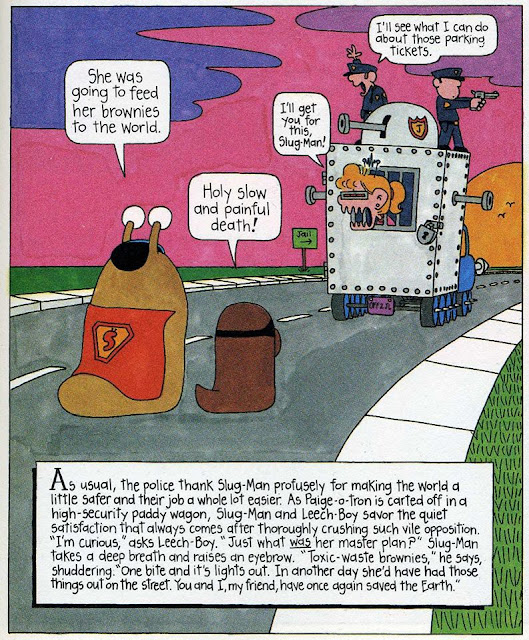 The general solution to any conflicts in Superhero comics  is to punch problems in the face until they're solved.  That may be a gross oversimplification, but the instances where conflicts are resolved without violence (including where two heroes fight each other over a misunderstanding) is remarkably small.  The whole purpose is to give a semblance of calm to the status quo, however long that lasts, until the next major revamp, the latest creative team wanting to shake things up to appeal to long-jaded readers who're constantly in need of their next fix, and need to have long-running franchise comics relevant to today's issues, even though newer characters from younger creators not tied down to corporations stealing million-dollar ideas from underpaid artists would be more appropriate.  No, I'm not particularly bitter, but I know a few people who are. 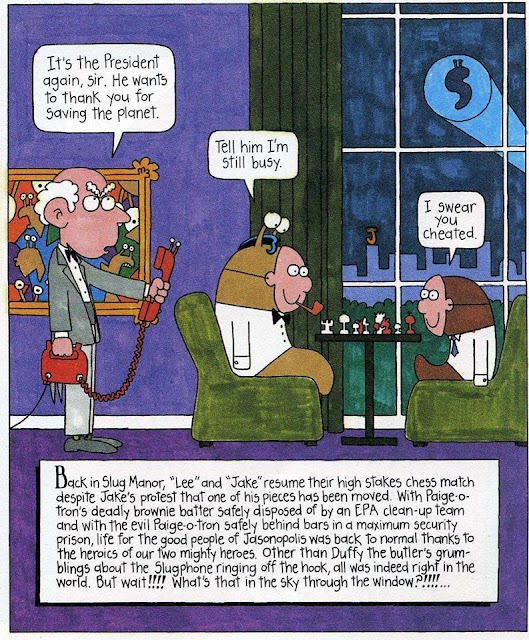 As typical of a Jason Fox get-rich quick scheme, the comic ends with a full advertisement page, filled with merchandising products that will never ever be available. 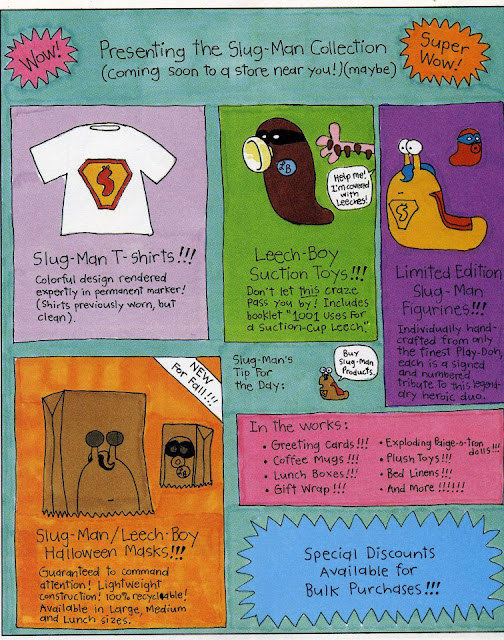