(Setting: the interior of a hospital wing.  A balding detective in a trench coat knocks on the door of an office)

Detective Flinch: Dr. Tenma?
(The door opens, revealing a world-weary brunette in a laboratory coat)
Doctor Tenma: Mister Flinch?  You made an appointment, right?
Flinch: Yes.  I was hoping we could speak confidentially.
Tenma: My office is always open.  (Leads Flinch inside, closes door)
Flinch: Lately, we've had rumours that the vigilante known as Code Name "P" is planning to take advantage of the ensuing confusion regarding the upcoming election.
Tenma: (Looks a little lost)  Unless it has to do with something medical, I'm not quite sure how I can help.
Flinch: There is.  You have access to a certain illegal drug in your possession.  A controlled substance, under article C2oh25-N3O, I believe.
Tenma: (Blank look)  What are you talking about??
Flinch: There's no use hiding it.  We've known about your operation for quite some time.
Tenma: (Looks warily at the door, seeking an escape route)
Flinch: Don't worry.  I'm not seeking a conviction.  I'm semi-retired, so officially, I'm not here.  I'm far more interested in a controlled substance that I used to partake.
Tenma: You??  I find that hard to believe.
Flinch: (Inhales, exhales deeply into his hands) It's not exactly something I'm proud of.  You see, I used to be a much more high-profile detective, helping solve some of the most baffling cases.
Tenma: Baffling cases?... You don't mean to say that... you were L?

Flinch: No, I wasn't THAT good.  (Chuckles)  No, but I took some mental-boosting pills that increased my productivity.  Unfortunately, they had the side effect of cutting off my relationships.  I became too grossly invested in my work.  My wife left me, my colleagues could no longer tolerate my presence.  My arrogance began to overwhelm getting further cases assigned my direction.  Eventually, I weaned off the pills, but my reputation was never the same afterwards.
Tenma: (Confused) So, why come to me then?  Why take these pills at all?
Flinch: In order to get into "P"'s mentality, I need to indulge deeply into the deepest darkest recesses of my mind.  And my ability lately has been sorely lacking.  I've always been three steps short of him, never quite catching up.  I don't like resorting to this, but desperate times call for desperate measures.
Tenma: (Picks pills from behind secret compartment)  This 'P' threat, it's pretty big, huh?  (Hands pills over)
Flinch: You have no idea.  (Contemplates pills in his hand)
Tenma:  You know, it's not too late.  You can still back out if you want to.
Flinch:  (Shakes head) I know I'm reaching.  Frankly speaking, I'm scared about what getting into his state of mind entails.  (Swallows pills)  But I'm more scared about what 'P' might do more.
Tenma: (Points towards door, hand on doorknob) Should I leave, or...?
Flinch: Stay.  I need somebody to keep watch over me.  I have no idea how I'll react, having been off for so long.  My relapse should -
(The detective stops short, his eyes bulging out.  He puts his hands on his head and starts convulsing, his whole body shaking wildly, alarming the doctor.  After several seconds of erratic movement, the seizures stop)
Tenma: (Tentatively moves within the drug-induced detective's line of sight)  ...Inspector Lynch?

(Detective Lynch removes his hands from his head in a relaxed manner, revealing the face of a smiling confident man with a cool lean predator-hungry look with razor-sharp eagle eyes constantly seeking justice)
Detective Lynch: "I am 'P'." 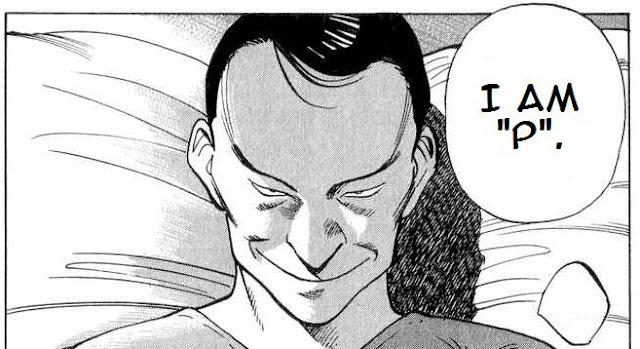 P: Hello.  Sorry to interrupt during a pivotal moment, but I felt it was time I had a few choice words to say.
This speech is not aimed at the general populace, but at the higher rankings of so-called men in charge.

At this current rate, your party is collapsing faster than I could possibly hope to implement.

Really, you have only yourselves to blame.

You've openly supported a man who for all intents and purposes, was a reprehensible human being.  All the proof was there for everyone with a lick of common sense to see. 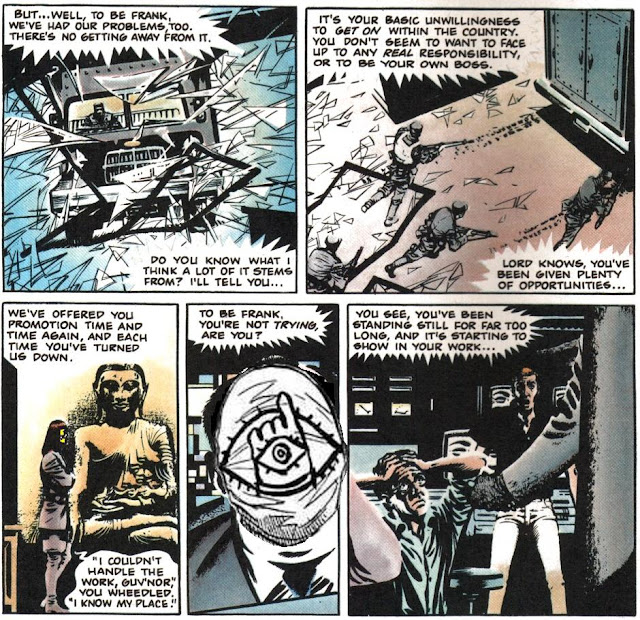 The only reason you started backing him up was because he gained the popular vote with the same poisonous methodology you've used over the years to appeal to your voting base.  The problem with using such a technique for so long - somebody was bound to corrupt and override the formula down to its most basic elements for maximum impact.

And what has he done since?


Furthermore, his default first response to any perceived threat is to go straight to the nukes.  And ALSO thinks that more countries should have nuclear weapons.

ANY other politician would long have apologized for their misgivings, hoped he'd be forgiven for their slights and move on.  Not him.  When met with anything resembling resistance - not even defiance - he digs in his heels and further digging in his roots for the hills he's willing to die on.  For all your hopes that he'd change his tune once sworn in as candidate, he decided to stick to the formula he knows best, since it worked this far.
This is a man who openly admits to refuse to change.

Your ceiling of quality, once so high and lofty has fallen so low that it now more closely resembles a cellar floor.  And yet, you continue to follow behind him, while openly resisting any serious backing.  Which is it? You can't have it both ways forever.  Sooner or later, you're going to have to make a decision. 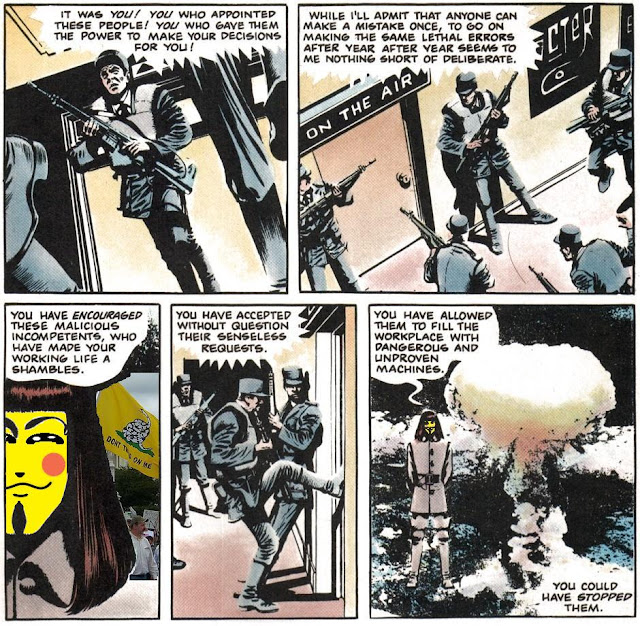 The ONE politician who made no move to endorse him, and appealed others to "vote their conscience" was booed off the stage for displaying disloyalty within the party.  Strange that voting our conscience is considered reprehensible.  At what point does despicable actions become acceptable behavior?

This is what comes out of letting your greed dictate your political terms.  We're at the point where a corporation is considered to be a person, but people are considered property.  You've made emotional arguments that have nothing to do with policy, and scared your voters beyond reasonable margins using anti-intellectual stances.  Annoying know-it-alls were just getting in the way with their factoids.  Well, here's one for you:

I have heard grumblings of the overwhelming dissatisfaction of the incompetence of the authorities in being unable to apprehend me, on the basis that "I'm only ONE man!"  Well, let me turn that back on you.  You only had to stop ONE man from rising as high into power as he did.  What's YOUR excuse? 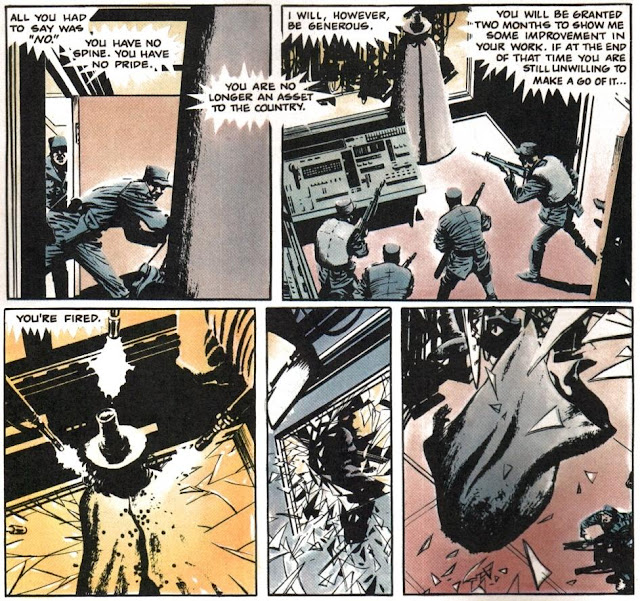 And now, back to our regular feature, currently in progress.

(Interior of the Doctor's office is a shambles)

Flinch: (Looks around, confused.  Is surprised to find himself naked)  What happened?  I didn't hurt you, did I?
Tenma: (Shaking) No, you just did some bizarre pantomime actions, roleplaying multiple theoretical scenarios using my office supplies, before stopping and writing something down before collapsing.
Flinch: What'd I write?
Tenma: (Tentatively hands piece of paper over)
Flinch: (Reads page)